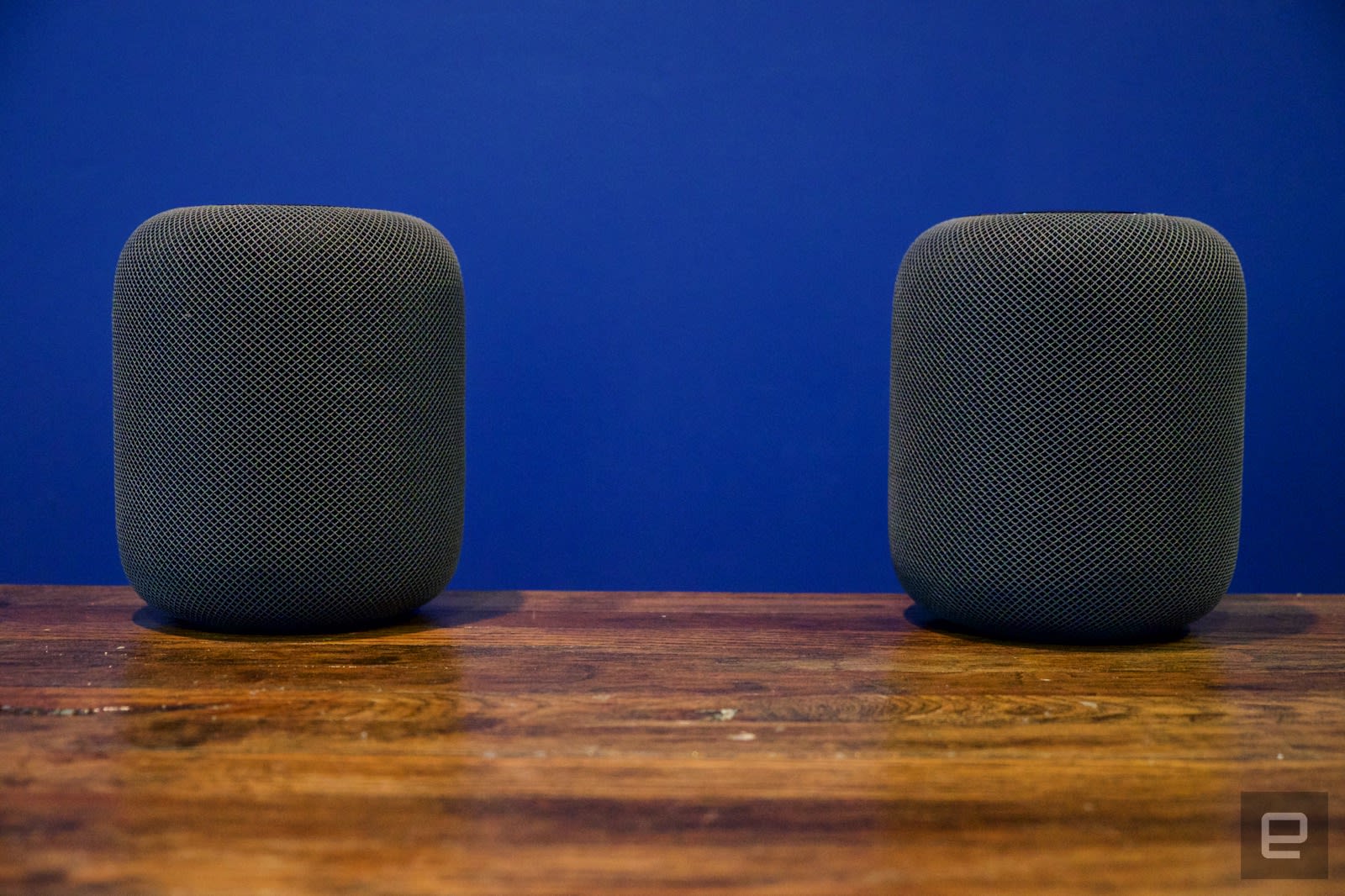 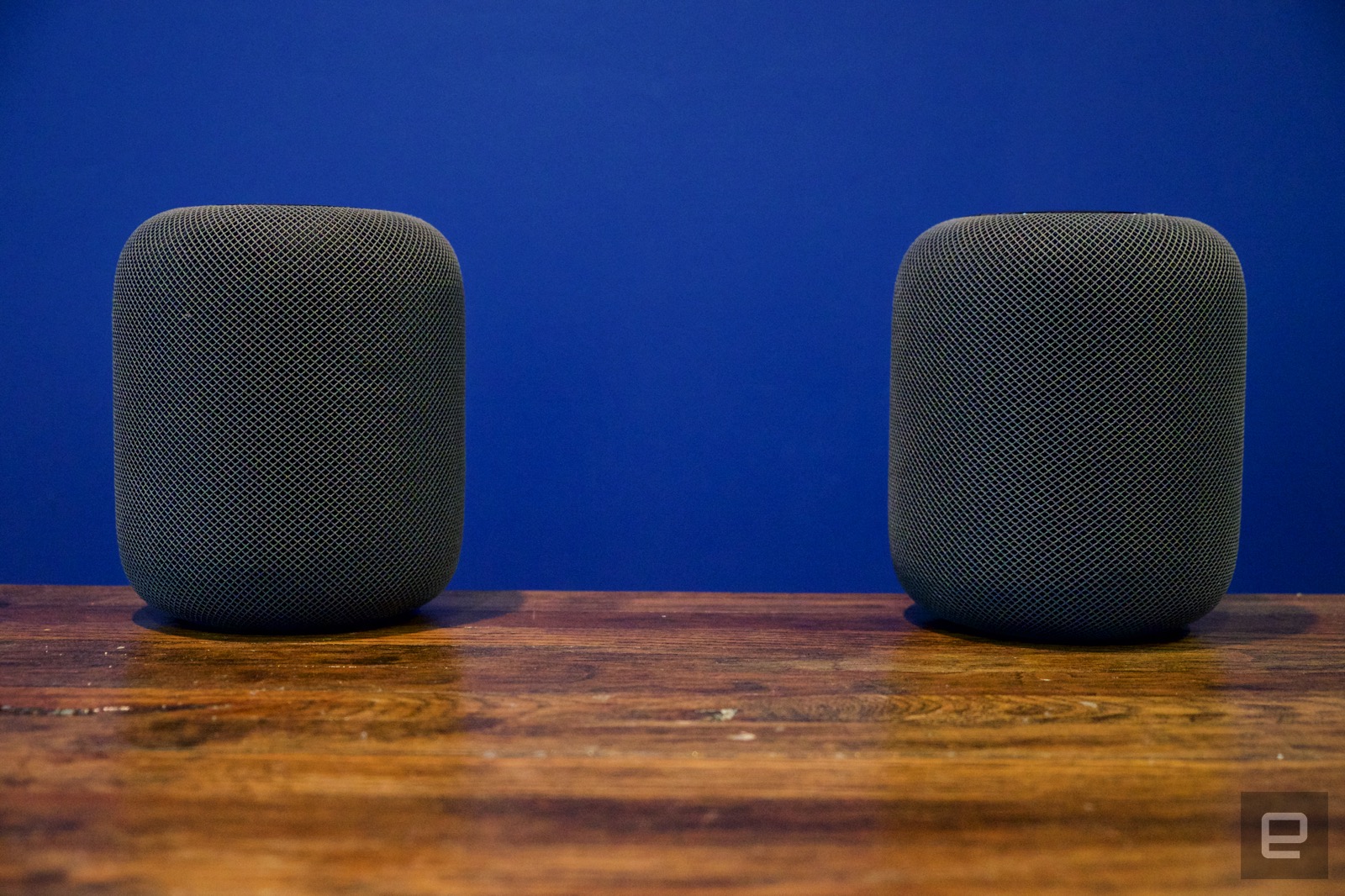 Apple was late releasing the HomePod. And even though the company took a few extra months to finish things up, it shipped without two key features: multi-room audio and stereo pairing. Without those, there wasn't a compelling case for buying multiple HomePods. But Apple has finally released a long-awaited software update for that enables the AirPlay 2 streaming protocol -- which also lets owners pair two HomePods in stereo or group together multiple speakers across your house.

With that big update out in the wild, I wanted to see how easy it was to manage multiple HomePods and hear how good a stereo pair sounded. While there are legitimate complaints with the smart speaker, the audio quality was never a problem. And with stereo pairing, two HomePods are definitely better than one.

Setting up a stereo array is simple. I reset the two speakers to factory settings, plugged them in where I wanted to, and put my iPad next to one of them. From there, a dialog popped up on screen asking a few questions before the speaker hooked up to my WiFi network and used my Apple ID to link up with my Apple Music account. For the second speaker, I just put my iPad next to it and it asked if I wanted to set them up in a stereo configuration. I tapped "yes," identified whether that was the left or right channel, waited another minute and was off to the races.

A stereo pair of HomePods shows up in the iOS Home app as a single speaker. That's where you'll go to split the pair up or adjust a few other settings, as well. When talking to the speaker through Siri, only the left one lit up to respond to my voice commands, but when they were playing music I could tap the top of either to pause or adjust volume.

While setting up two speakers is as easy as setting up one, the listening experience is a major upgrade. That's not really a surprise -- as I said earlier, a single HomePod sounds great, but putting two together makes things significantly better. Obviously, being able to have true stereo separation is basically a requirement for serious listeners. My go-to track for testing stereo is The Postal Service's "Such Great Heights," and the ping-pong synths bouncing left to right sounded properly distinct, as did the vocals that move between the two speakers. But the bump in quality goes beyond just having true stereo sound.

Having two HomePods means the already-impressive bass performance is even stronger, and you can crank up the volume even more. Just like with a single unit, you can get pretty close to max volume without the music distorting. That was valuable for basically all types of music I tried, from the lush orchestration in Howard Shore's Lord of the Rings soundtracks to Julien Baker's breathtaking and minimal performance on her album Turn Out the Lights. Blasting some electro-pop like Cardiknox and Broods brought out the speakers' excellent bass, and more aggressive albums like the two recent Nine Inch Nails EPs and some old-school Metallica brought the complex layers of the songs to the forefront along with chest-pounding beats.

It's hard to tell exactly how the HomePod's "spatial awareness" affects music when playing it in stereo, but it sounded nearly as good from across the room as it did sitting directly in front of them. The stereo separation isn't as noticeable when not sitting dead center, but they still sounds excellent. It's a well-balanced listening experience, similar to using a single HomePod, but with welcome increases in overall volume and bass performance.The speakers' 360-degree design makes the music feel like it's equally present regardless of where you are in the room, rather than it coming direct from a single point.

Dual HomePods are still not as loud or as good as a pair of the fantastic Sonos Play:5 speakers, and Sonos doesn't tie you to one music service. But, the Play:5 don't offer voice control, has a more complicated setup and audio tuning process, and cost $500 each ($150 more than a HomePod). Sonos does currently have a deal where you can get two Play:5s for $900, but that's still $200 more than a pair of HomePods. 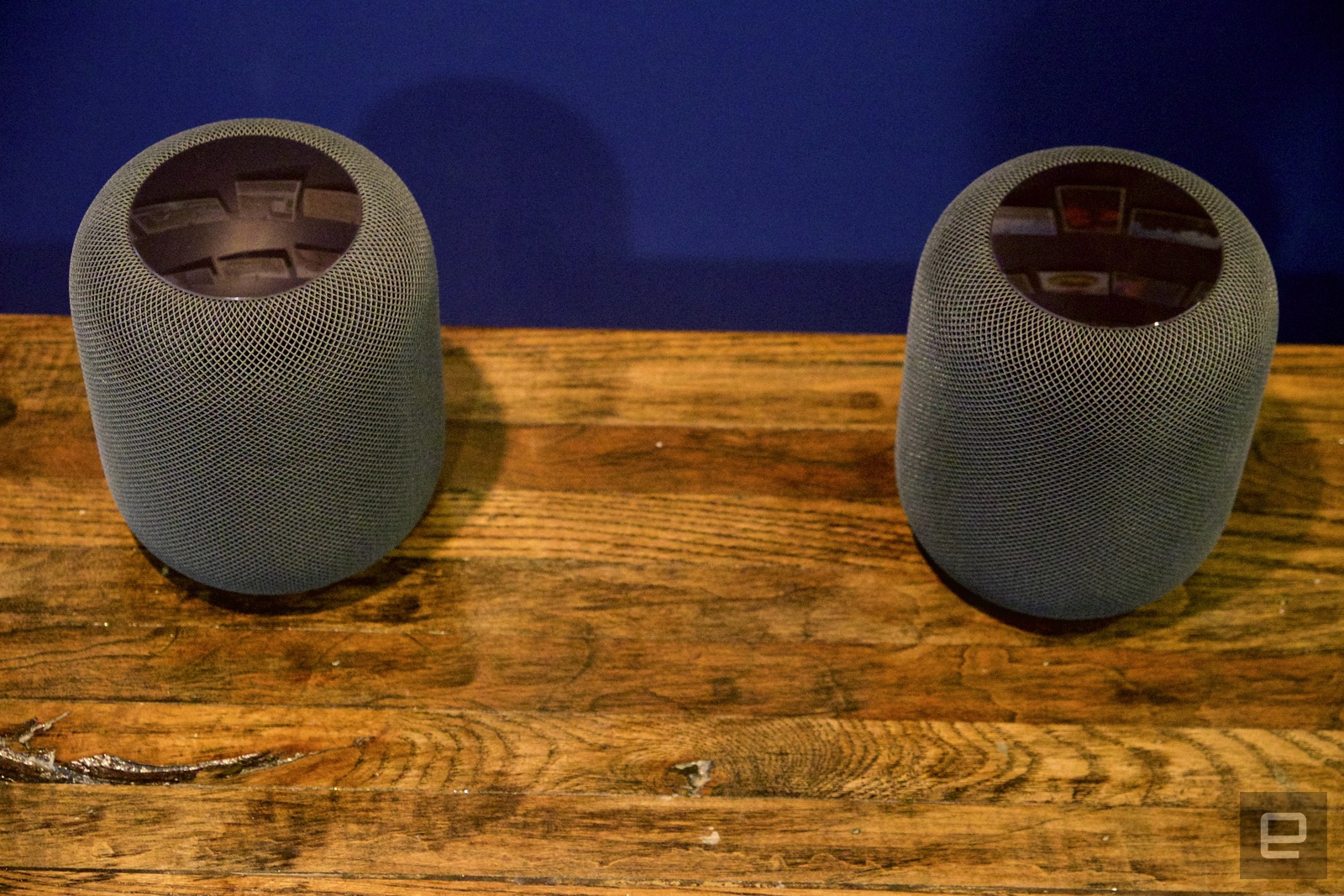 Two HomePods can also potentially upgrade your TV's sound -- if, of course, you're using an Apple TV. The latest tvOS update added an option to output audio from the set-top box to the HomePod, either a single speaker or a stereo pair. It's not going to be an upgrade if you've got a proper surround sound system, but if you're still making do with your TV's built-in speaker (like me) it's definitely worth trying. Still, I wouldn't advise anyone buy them specifically for your TV. Your $700 would probably be better spent on dedicated home theater gear, and the HomePods only work with things you can play on Apple TV. Also, volume output when watching Apple TV was strangely quiet -- I typically turned the HomePod nearly all the way up while watching movies.

There are some additional oddities in how the Apple TV and HomePod work together. For starters, asking Siri to play some music would turn on the Apple TV, because the two devices are linked together. That's annoying, but the alternative is de-selecting HomePod as an output option when you're done watching TV, which means you'll need to re-select it when you want to watch something else. Either way, you're jumping in and out of settings a lot, and it's clear evidence that Apple didn't really intend anyone to use this as a main home theater speaker.

As for multi-room audio, controlling that is pretty simple, as well. If you start a song on one HomePod and want to play it in another room, you can go to the iOS Control Center and long-press on the media controls to see all the AirPlay 2-capable devices hooked up to your home network. From there, press on the speaker playing music and select which additional devices you want to play music through. Google and Sonos work similarly; in their apps, you can see all the devices you have available and create groups, or leave them set up as individual speakers that can play different songs simultaneously. As for voice commands, you can just ask Siri to play a song, album or playlist and include the speaker(s) that you want it to play on.

In my relatively small house, I prefer a stereo setup rather than having them spread out in different rooms. But, the HomePod sounds very good on its own, so having one in both my office and living room is tempting, as well. And if you already have some smart speakers, the HomePod will work alongside AirPlay 2-enabled devices, including those from Sonos. They'll show up in Control Center the same way multiple HomePods show up currently, and third-party speakers can be controlled through Siri as well.

For most people, the addition of stereo pairing and multi-room audio probably won't change the equation. $350 for a HomePod is still a fairly large commitment when you can buy an Echo or Google Home for about $100. But Apple's speaker remains one of the best-sounding options you can buy, and having several enhances that experience in multiple ways.

Getting to test the stereo experience has been a blast — among the best audio experiences I've had lately. New albums from two of my favorites (Chvrches and Now, Now) both came out while I was testing, and I've played them so much I'm already a little tired of them. But getting to hear them in such excellent quality has been a thrill and kept them sounding fresh. Still, Siri is still more limited than Google Assistant or Alexa, but for straight-up audio quality, it's hard to go wrong with stereo HomePods if you have the budget for it.

In this article: apple, av, gear, hands-on, homepod, ios, siri, smartspeaker
All products recommended by Engadget are selected by our editorial team, independent of our parent company. Some of our stories include affiliate links. If you buy something through one of these links, we may earn an affiliate commission.