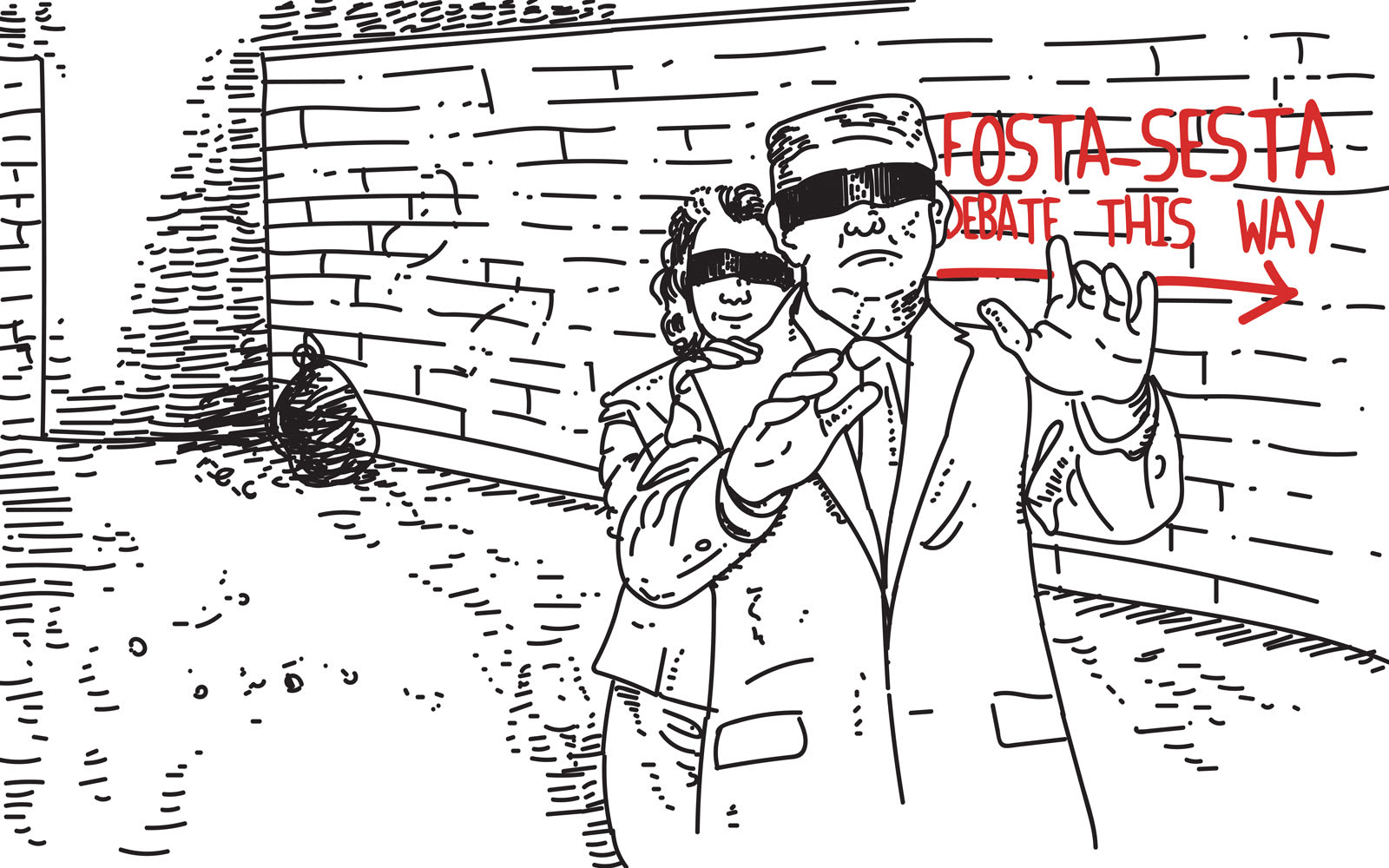 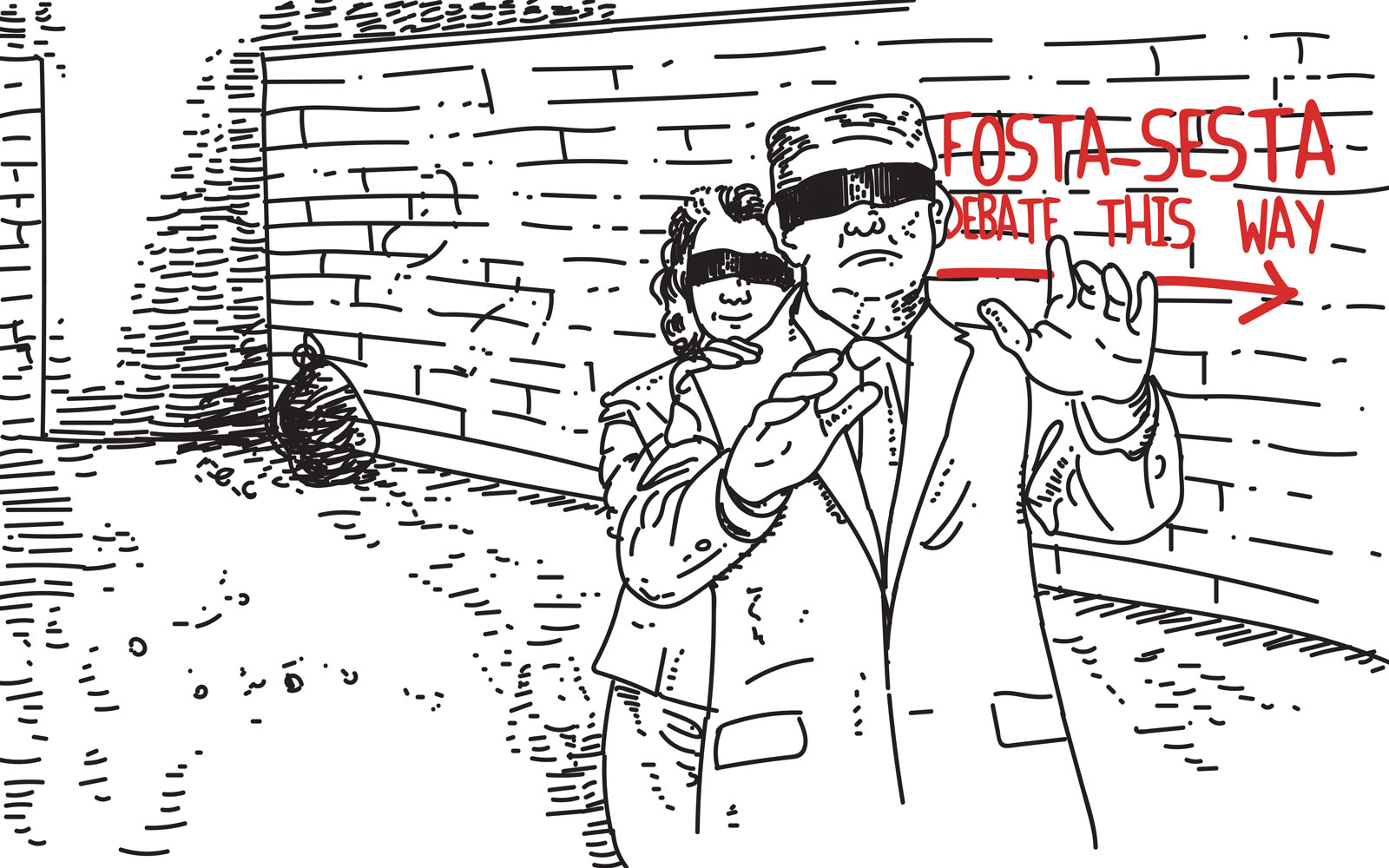 If you're familiar with the phrase "that's a terrible idea, let's do it" then you might be one of the British MPs who think that the UK should do its own version of FOSTA-SESTA. That's exactly what Labour MP Sarah Champion has done by leading a debate this week for the creation of laws to criminalize websites used by sex workers in the UK -- under the rubric of fighting trafficking, of course.

A self-appointed group of MPs (the "All-Party Parliamentary Group on Prostitution and the Global Sex Trade") fronted by Ms. Champion made a call to ban "prostitution websites" during a Wednesday House of Commons debate. Conflating sex work with trafficking just like their American counterparts, they claim websites where workers advertise and screen clients "directly and knowingly" profit from sex trafficking.

Watching British politicians advance something as broken and harmful as FOSTA-SESTA is like watching an animal try to chew its leg off to escape a trap -- while we're all standing outside the glass enclosure shouting "that's the wrong leg!" Champion is apparently OK about the fact that they're parroting Trump and FOSTA-SESTA; she's even joked that it's a special kind of irony. Indeed. 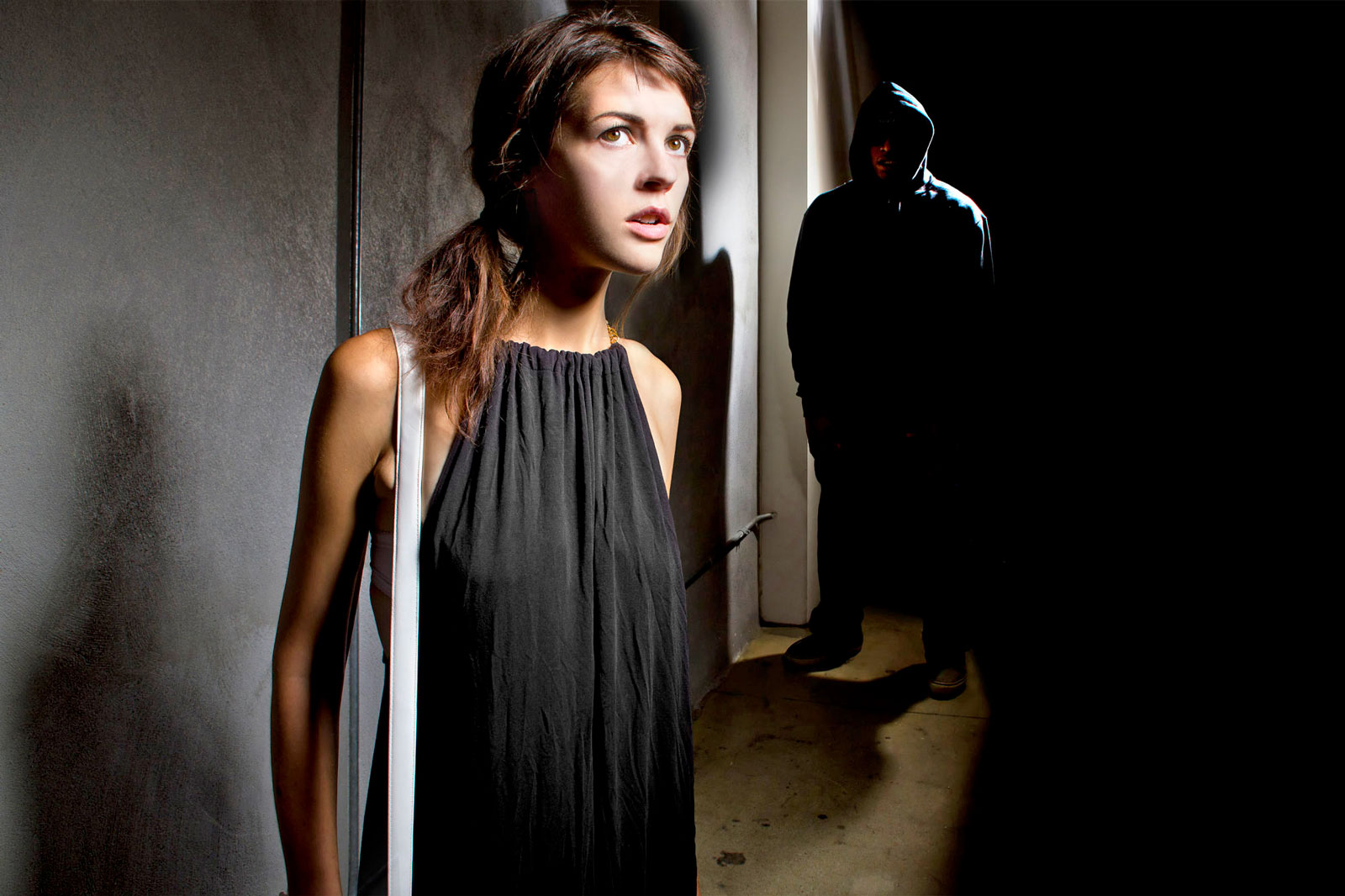 Just think about it, UK. We'll have so much in common. Soon, you too can have pimps coming "out of the woodwork" to exploit formerly-independent sex workers, according to trafficking survivor Laura LeMoon from Safe Night Access Project Seattle. The UK can also get a massive increase in blanket online discrimination and censorship.

Maybe you'll even get your own version of the massive lawsuit that's been filed by EFF and the Woodhull Freedom Foundation on the grounds that FOSTA "silences online speech by muzzling internet users and forcing online platforms to censor their users." EFF stresses that "FOSTA represents the most broadly based and comprehensive legislative censorship of internet speech since Congress passed the anti-indecency provisions of the Communications Decency Act in 1996."

Friends in the UK will also reap the complete non-rewards of eliminating sex-work-resource sites in the form of police struggling to find and investigate sex trafficking crimes and criminals. There's also the side-benefit for your more repulsive "punters" who, like ours, will openly take advantage of workers made more desperate by lack of safe advertising. Copying the Americans in this spectacularly wrongheaded fashion will also get the UK's more vulnerable populations an increase in crime, abuse, and death after all the proponents of this terrible idea are done celebrating their victory.

You too can have scores of women, LGBTQ people, gay men, immigrants and a whole lot of people of color losing their income overnight with the passage of an inconsiderate, deeply flawed law that maliciously ignores the people it affects.

I mean — asking for myself — are people in the UK able to even read the news from over here? Because this FOSTA-SESTA thing hasn't worked at all, unless by "working" you mean "driving traffickers deep underground" with a side helping of consigning sex workers to the shadows where they're quite literally dying as a result of the law.

Taking down these platforms will push sex workers deeper underground exposing them to greater risks of violence, exploitation and trafficking. https://t.co/hG8sxCl9gG

Because ignoring sex workers and trafficking survivors was key to FOSTA-SESTA's success, its UK doppelgangers are doing the same. The Sex Worker Advocacy and Resistance Movement (SWARM), the English Collective of Prostitutes (ECP), and the xTalk collective all held a protest the day of Champion's presentation, making clear that no sex workers had been consulted about proposed laws directly affecting them.

So much for believing women

In a time when #MeToo has changed historical patterns around believing women when it comes to sex and consent, Champion made a point to gaslight women who'd want to speak for themselves about the matter, tweeting: "Buying someone is commercial sexual exploitation. If you have to pay people to sleep with you -- it's not consent."

Despite believing that once money is involved a woman can't be trusted with her own power of consent, Champion identifies as a feminist. "It's extraordinary that people who call themselves feminists are promoting the exact same legal model which the Trump administration has used against sex workers," explained Jen, a sex worker and activist with SWARM. "We know already that SESTA/FOSTA is endangering vulnerable women and forcing them into the hands of managers and abusive partners. It's also shifting power from sex workers to clients: Clients in the US are bragging about how they know sex workers can't afford to make basic safety checks now." 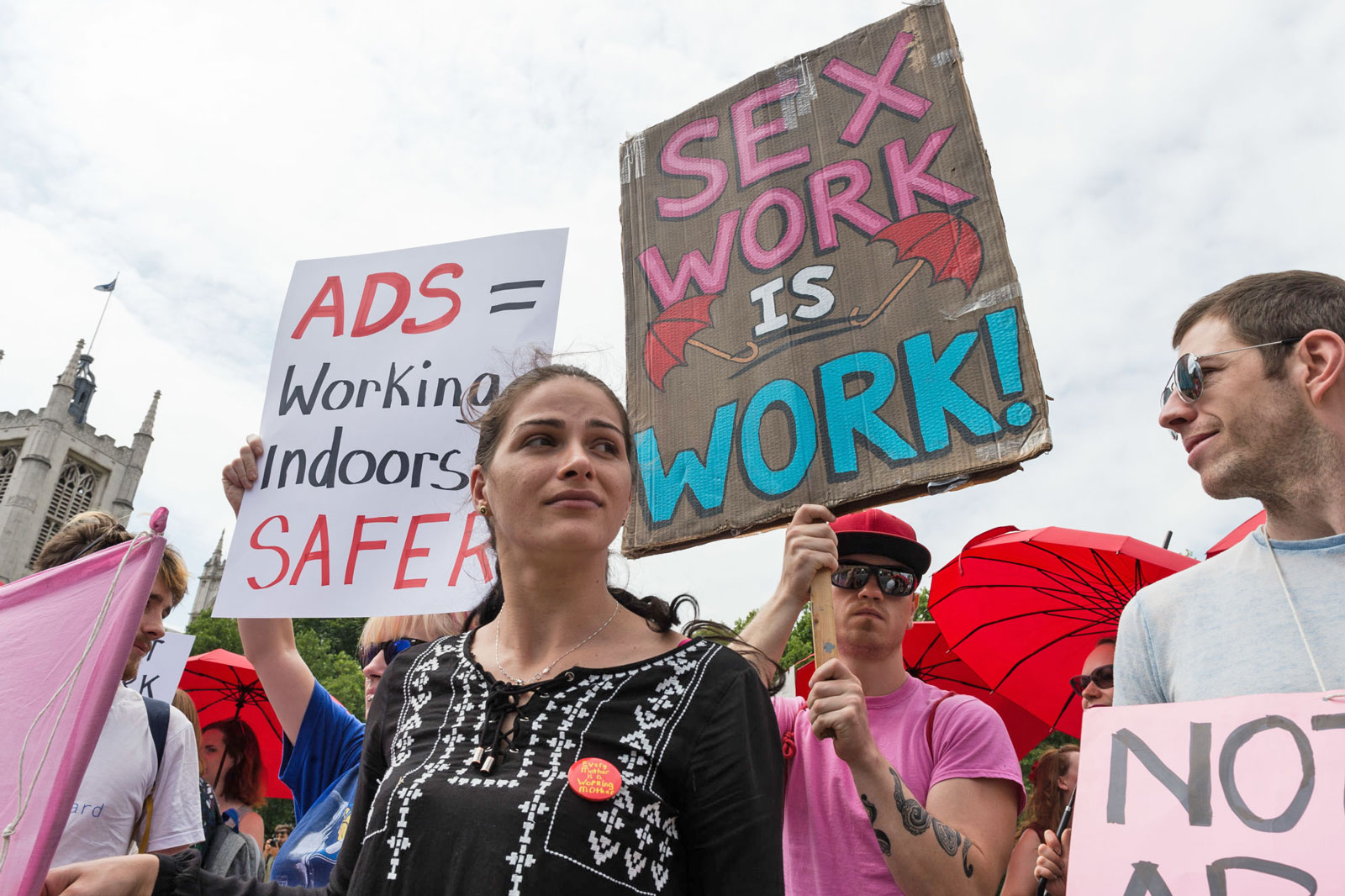 But, hey, since UK politicians are fancying the totalitarianism trend we're having over here, why cut corners? Why not copy the utter sham of FOSTA-SESTA all the way down? Take the foundations of FOSTA-SESTA for example. Our lawmakers did not fact-check the bill's claims, research the religious neocons behind it, nor did they listen to law professors, anti-trafficking groups, or sex work organizations.

The "All-Party Parliamentary Group on Prostitution and the Global Sex Trade" (APPG on Prostitution) anchored its argument in the "Behind Closed Doors" report. Like FOSTA-SESTA, it targets sex-work websites.

Everything that led to the free-speech and human-rights disaster that is FOSTA-SESTA centered on the American religious right's crusade to remove Backpage -- as an emblem for the moral (sexual) threat they perceive in the free and open internet. The site was one of several in its crosshairs where sex workers could avoid pimps and independently advertise, safely screening clients. These sites were also where law enforcement had a clear avenue to pursue actual sex traffickers, which are not sex workers.

The proponents of FOSTA-SESTA ignored anti-trafficking organizations, the Department of Justice (which opposed it), and more, while falsely and deliberately conflating trafficking with consensual adult sex work in order to accomplish their goal -- magically making everyone disappear. As a result, over 150 websites once used by sex workers to screen clients and stay safe have been eliminated.

The group of MPs pushing to replicate FOSTA-SESTA in the UK are following the same roadmap. At the locus of their moral crusade are British websites Vivastreet and Adultwork. Like the now-shuttered websites in the US, Vivastreet works with law enforcement to find actual trafficking victims and fight this crime. "We take the issue of exploitation extremely seriously, and we are working closely with the Home Office to help develop an industry-wide approach to identifying and preventing online trafficking," Vivastreet told the BBC.

APPG's "Closed Doors" report attempts to give a nod to sex workers by advocating the "Nordic model" of criminalizing those who pay for sex. The Nordic Model, like criminalizing sex-work websites, drives sex work out of the public eye and into the dark where things get worse for everyone. There's a reason Amnesty International backs decriminalization and not the Nordic Model. After the Nordic model was implemented in Northern Ireland, within only one year, crimes against sex workers went up 54 percent, with an increase of violent crimes to 77 percent.

"Behind Closed Doors" also leveraged the nifty trick of misquoting the UK Home Office report, "A Typology of Modern Slavery Offences in the UK." Where "Behind" states that "10,000-13,000 victims are the 'tip of the iceberg,'" the "Typology" report clarifies that this 2013 number covers 17 different types of modern slavery offenses (five of which are sex-related). Additionally, "there was an equal split between females and males," and the report stated "the most common type of exploitation for adults was labour."

This jibes with Freedom Network USA, "the largest coalition of experts and advocates providing direct services to survivors of human trafficking in the U.S." It also has data backing its claim saying "more people are trafficked into labor sectors than into commercial sex." Plus, Freedom Network unequivocally states that protecting the rights of sex workers, and not conflating them with trafficking victims, is critical to the prevention of trafficking. Freedom Network was not consulted for anything around FOSTA-SESTA, but gosh, it would've been nice.

In this article: badpassword, column, DonaldTrump, EFF, FOSTA-SESTA, internet, opinion, personal computing, personalcomputing, politics, security, sex, SexWork, tomorrow, trafficking, UK
All products recommended by Engadget are selected by our editorial team, independent of our parent company. Some of our stories include affiliate links. If you buy something through one of these links, we may earn an affiliate commission.