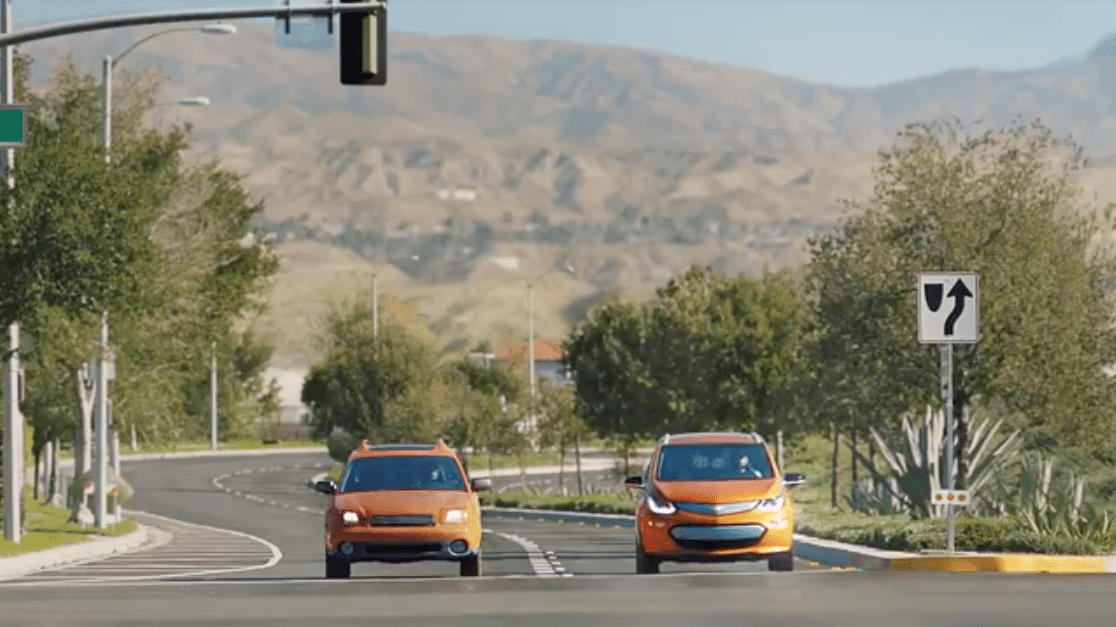 Volkswagen's Electrify America subsidiary has put out a commercial that aims to spread awareness of electric vehicles and how far the industry has progressed, Reuters reports. The ad is part of a $45 million public education initiative. "We're trying to say with this campaign that electric vehicles are fun to drive, the range is great and charging is more widely available than people know," Richard Steinberg, Electrify America's senior director of green cities, marketing and communications, told Reuters.

The commercial uses two familiar cartoons to make a point about EVs over standard vehicles. In the ad, you see a man in an orange car stopped at a red light while the Flintstones theme song plays. Then a man in an orange Chevy Bolt drives up to the light while the Jetsons theme takes over. Once the light turns green, the man in the Chevy Bolt drives away, leaving the other man behind, while a speaker says, "With instant acceleration, electric cars are more fun to drive and more affordable than ever. Electric cars are here." The message from the education campaign, dubbed Plug Into The Present, is "Say goodbye to the Stone Age."

The brand neutral ad features multiple automakers' EVs. Along with the Chevy Bolt, it also includes Hyundai's Ioniq, BMW's i3, Honda's Clarity, Nissan's Leaf and Volkswagen's e-Golf. Volkswagen agreed to put $2 billion towards clean driving infrastructure and education as part of the settlement over its diesel emissions scandal.

"Electric cars are not something of the future, they are here now and more accessible than many people know," Steinberg said in a statement about the education initiative earlier this month. "The JetStones campaign is just the beginning of our work to educate and demonstrate that electric vehicles offer a full array of features that customers expect, and they are totally fun to drive."

Via: Reuters
Source: Plug Into The Present
In this article: awareness, ElectricVehicle, electrifyamerica, gear, green, theflintstones, TheJetsons, tomorrow, transportation, video, volkswagen
All products recommended by Engadget are selected by our editorial team, independent of our parent company. Some of our stories include affiliate links. If you buy something through one of these links, we may earn an affiliate commission.