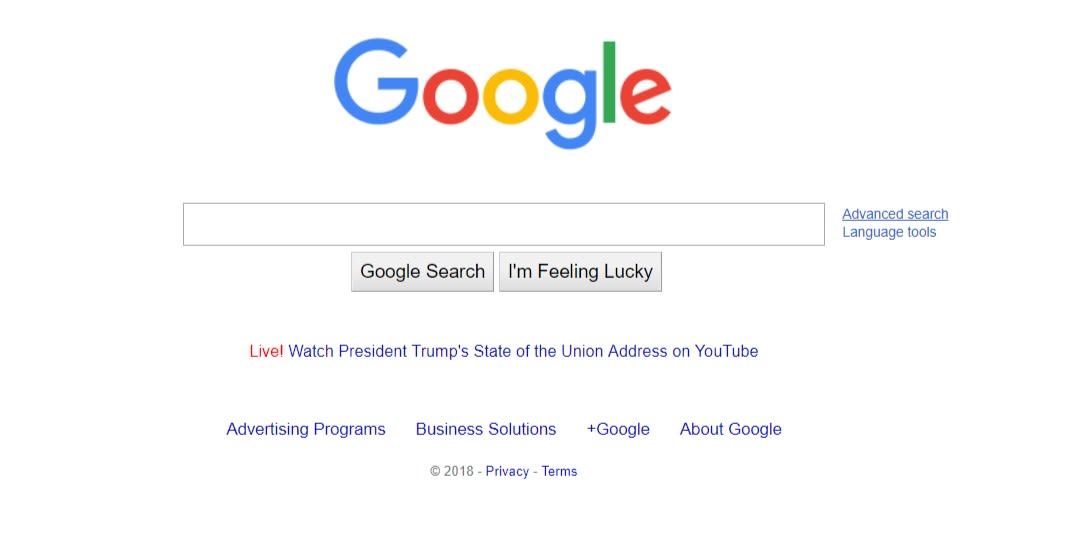 After earlier tweeting, deleting and re-posting unsupported claims that Google is "suppressing voices of Conservatives," this afternoon the President's personal Twitter account posted a new attack video. It claimed that the company failed to promote his State of the Union address with a link on its homepage after doing so for President Barack Obama, but several things about it don't hold up.

In a statement to the media, Google explained that isn't quite true, since a President's first address to Congress (like Donald Trump's this year) is not technically a State of the Union address, and explained that it did not promote Obama's speech in 2009 or Trump's in 2017. While the video claimed that it did not post a link for the 2018 speech, Google said it did.

Buzzfeed News points to a Reddit post in the pro-Trump The_Donald section containing a screenshot showing the active link, posted during the speech earlier this year. Additionally, it points out that the video doesn't match Google's logo during the time in question. Meanwhile, Rob Graham points to an Internet archive page showing the link was active during the speech.

Even if the video's claims were true, which all evidence available shows they are not, it's unclear why a link to a YouTube video -- which is also posted on the White House website -- would provide bias for or against a speech that also aired live on all major network and news TV channels.

On January 30 2018, we highlighted the livestream of President Trump's State of the Union on the google.com homepage. We have historically not promoted the first address to Congress by a new President, which is technically not a State of the Union address. As a result, we didn't include a promotion on google.com for this address in either 2009 or 2017.

Source: Internet Archive
Coverage: Buzzfeed News, ErrataSec
In this article: 45, donaldtrump, gear, google, internet, politics, potus, sotu, youtube
All products recommended by Engadget are selected by our editorial team, independent of our parent company. Some of our stories include affiliate links. If you buy something through one of these links, we may earn an affiliate commission.