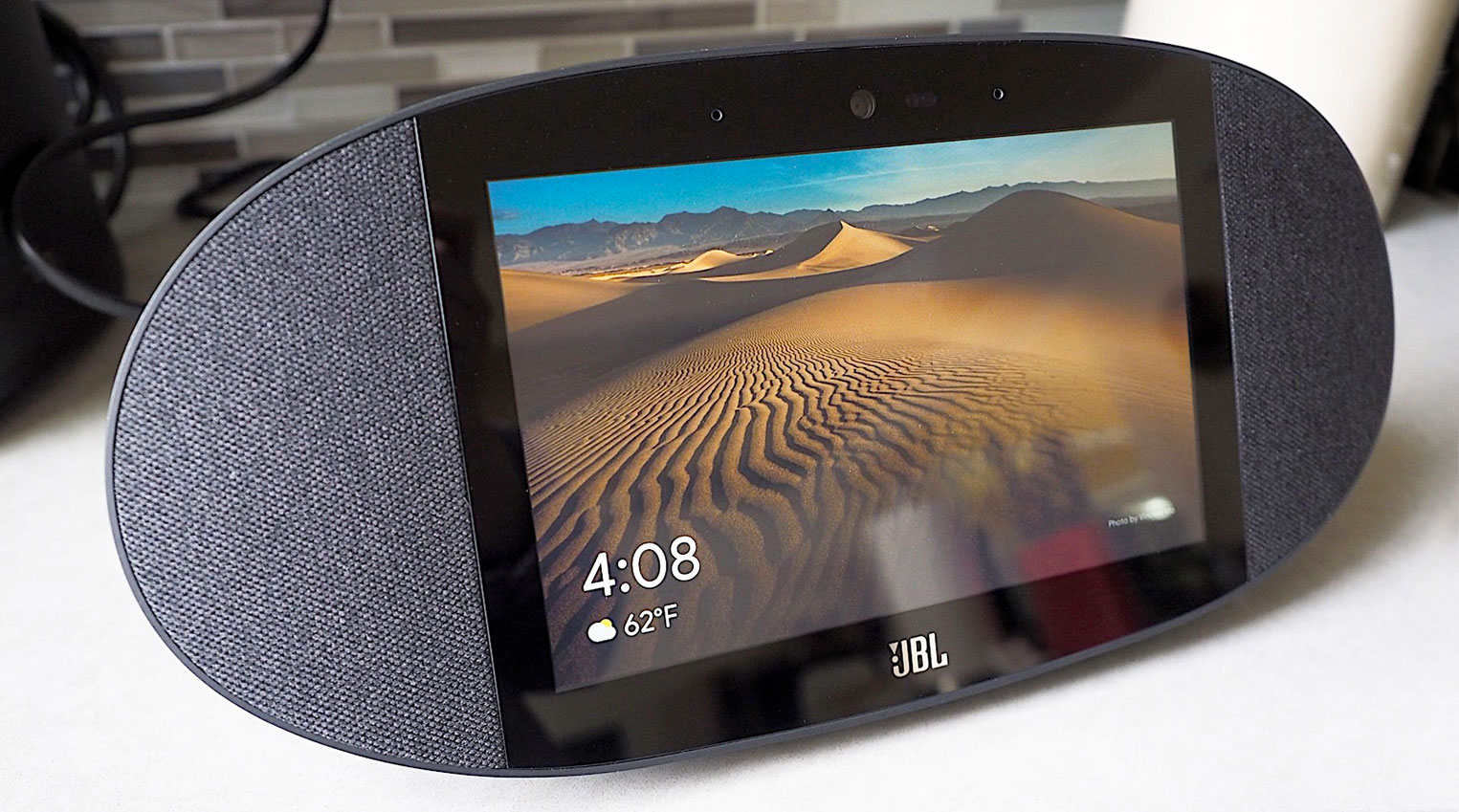 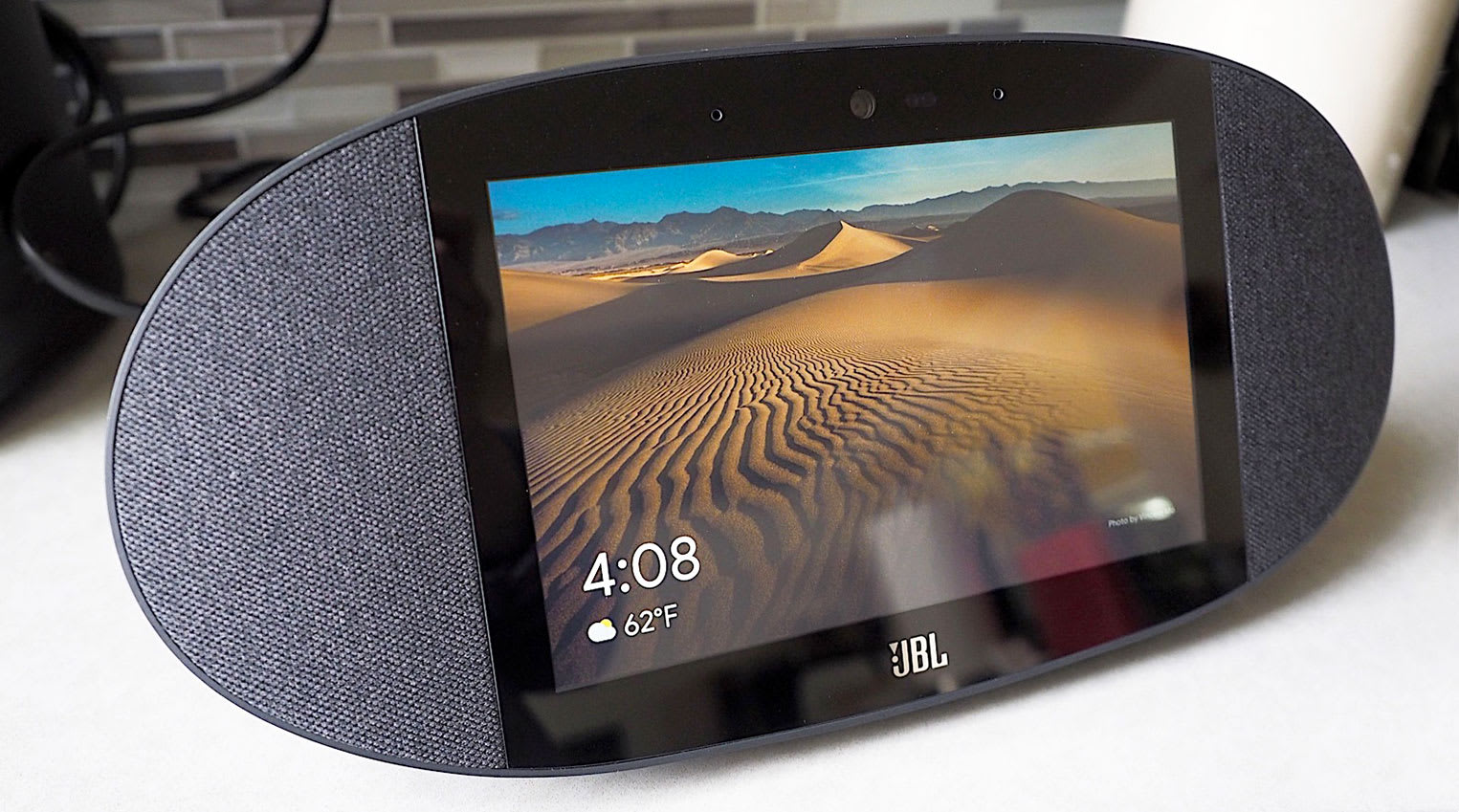 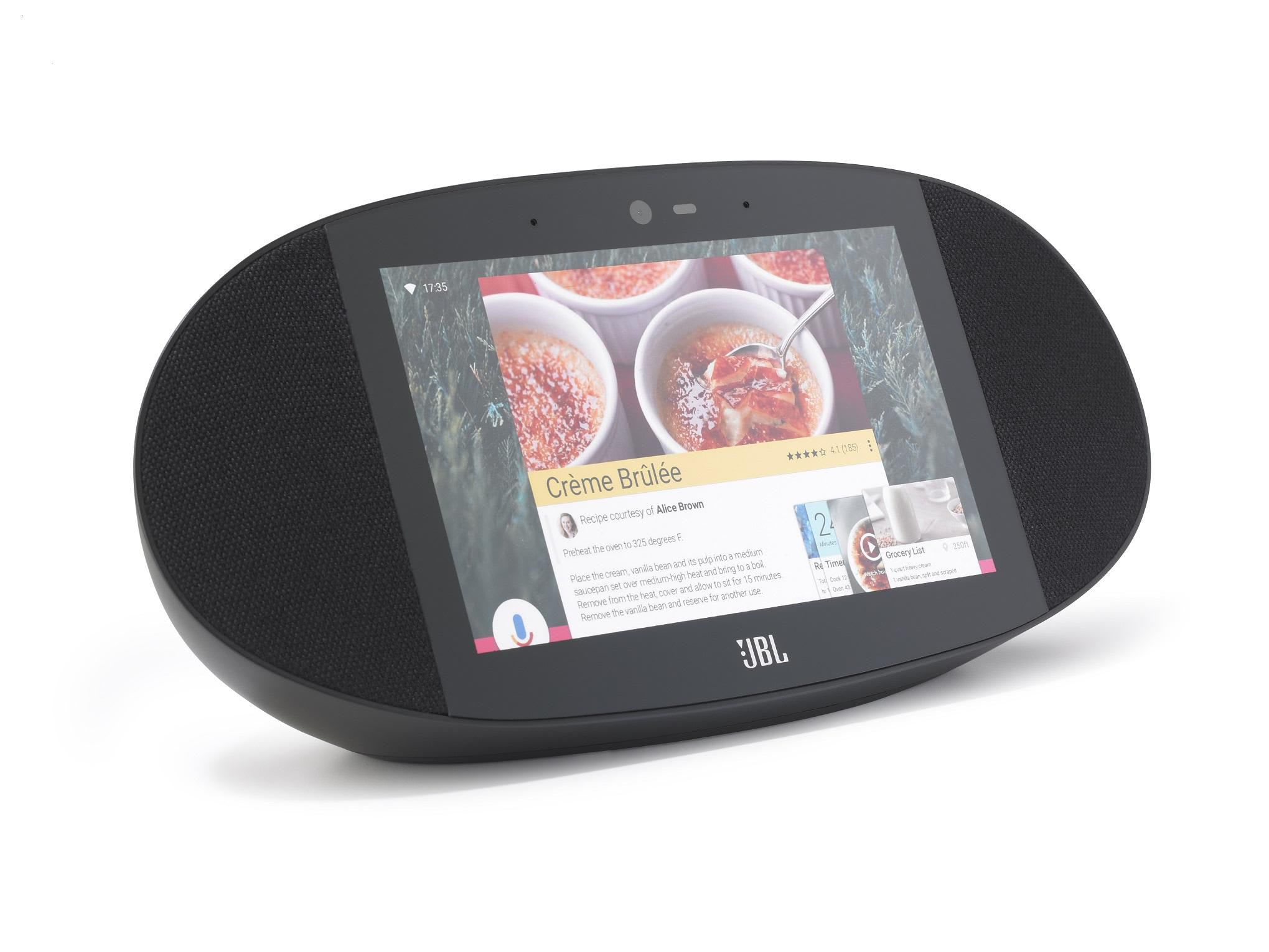 Even though Amazon was the first to come up with the smart display concept (via the Echo Show), it's Google that transformed it into a whole new consumer category. Much of this is due to Google's hardware strategy: It partners with different manufacturers to make several products, while it concentrates on building out the software ecosystem. The result is a slew of different Google Smart Displays, each with a different take on the idea. The JBL Link View is the Google Smart Display with the best audio quality, at least for now. With two front-facing 10 watt speakers and a rear passive radiator, the Link View goes especially well with bass-heavy tracks. Yet, the display and design pales in comparison to the Lenovo Smart Display. If audio is your priority, then the Link View is a great choice. If not, then either go for the Lenovo or wait for something else down the line.

Be the first to review the Link View?
Your ratings help us make the buyer’s guide better for everyone.
Write a review

The first was the Lenovo Smart Display, which set a high bar for what a Google Smart Display should look like. The design is sleek and stylish, with a gorgeous display and a modern feel that is definitely more attractive than the clunky Echo Show. The second Google Smart Display to hit the market is the JBL Link View, whose primary focus is audio, which makes sense given JBL's pedigree.

That's probably a good thing: Design-wise, the Link View leaves much to be desired. This isn't to say that the Link View is unattractive -- but its elongated egg-like shape, coupled with an all-black casing makes it look a little boring. It's basically an oval boombox with a screen in the middle. You'll also find a camera above the display, volume controls and the camera toggle on the top and a mute switch around the back.

Still, a simple design is not necessarily a bad thing. If you'd rather have a smart display that blends in with your existing home entertainment equipment, then the JBL Link View might be a good fit. Personally, Lenovo's device goes much better in my mostly white kitchen. And, yes, I have to admit I'm a sucker for a bamboo finish. 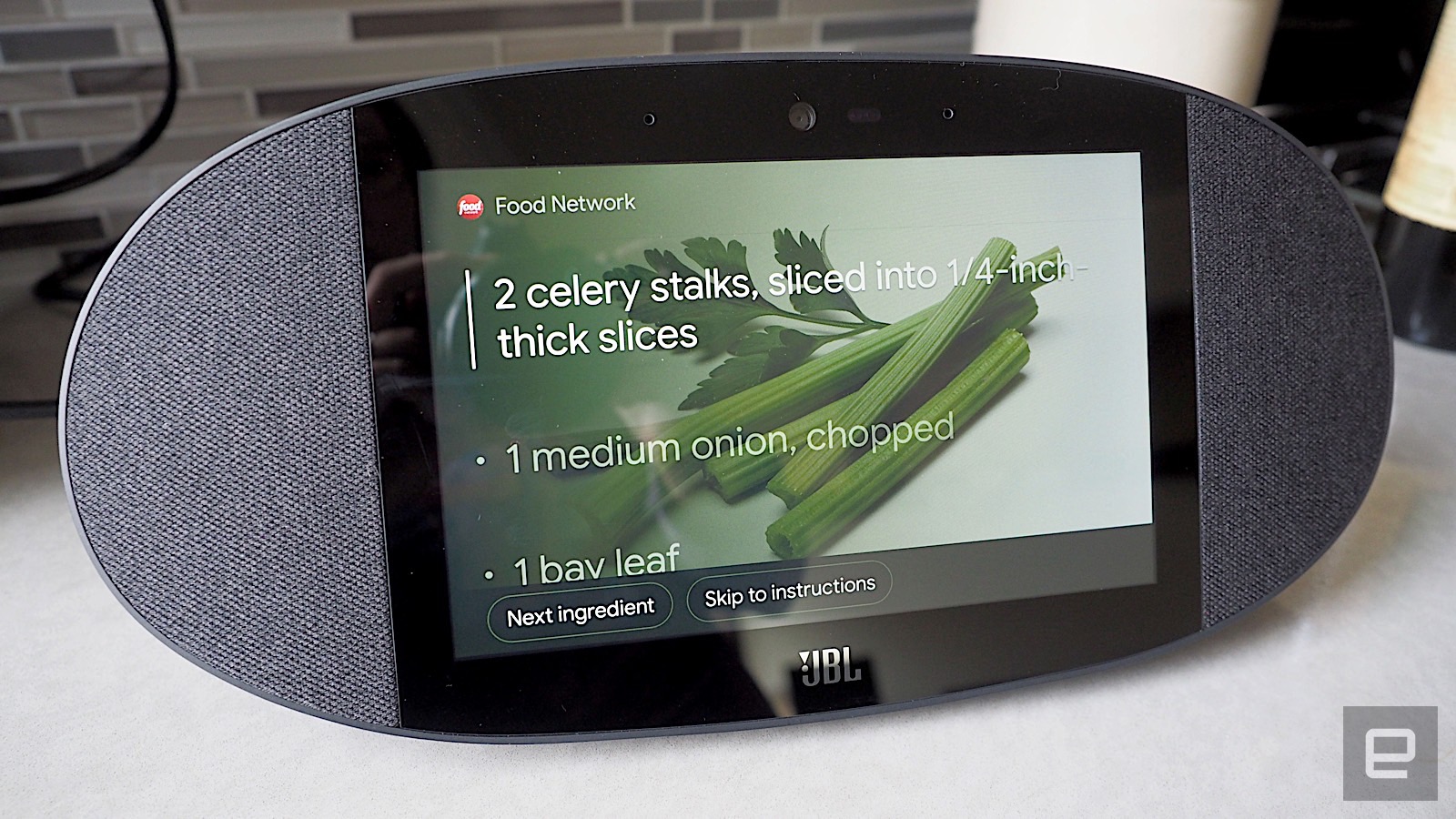 While Lenovo's Smart Display comes in both 8- and 10-inch sizes, the JBL Link View only has a single 8-inch screen option. Unfortunately, though, this doesn't necessarily translate to a smaller footprint. Measuring 13 by 5.9 by 3.9 inches, the Link View is actually similar in width to the 10-inch Lenovo Smart Display, which is roughly 12.2 inches wide. Same amount of counter space, but smaller screen size? Yeah, that doesn't seem like a good trade-off.

Plus, the screen itself just doesn't look quite as good as the one on Lenovo's offering. The Link View's 1,200 x 800 HD resolution is certainly sharp and colorful in its own right, but compared side-by-side with the Smart Display, it looks dull and washed out. If you're choosing one of these products based on the screen quality, definitely go with the Smart Display over the Link View.

Where the JBL Link View really shines is audio quality. Equipped with two front-facing 10-watt speakers along with a rear-facing passive radiator, the Link View pumps out fantastic sound that is definitely superior to the Lenovo Smart Display. The bass is deeper and smoother, and the overall tone is richer as well. I think my Sonos One speaker sounds maybe a little more well-rounded, but that's probably because it was specifically calibrated for the room. For a straightforward speaker with thumpier bass, the Link View definitely wins out. 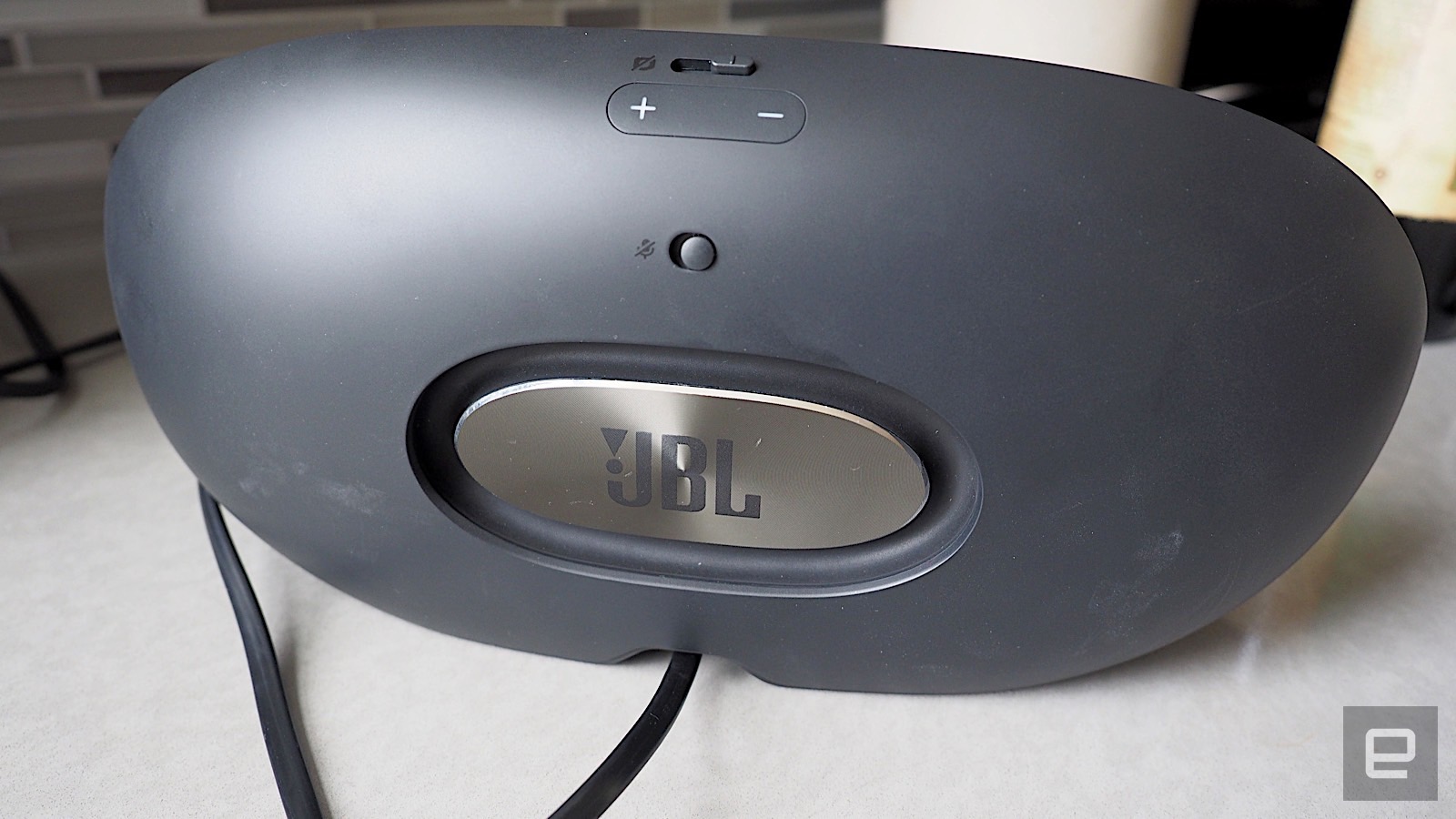 As for JBL's software, it's identical to that of the Lenovo Smart Display as well as all other Google Smart Displays. You set it up with your phone via the Google Home app, and you need both devices to be on the same WiFi network in order to pair and authenticate your account. Once you do that, the Link View will sync up all of your Google information automatically. So, for example, my Google Calendar appointments showed up on my screen, and I was able to use the display as a viewfinder for my Nest Hello webcam.

Google reps have said that the Smart Display is basically Assistant with a screen, and they're not wrong. Ask it anything that you would typically ask your Google Assistant, and it'll show helpful visuals along with the information you seek. I looked up the weather for Portland, Oregon, for example, and it not only showed me the highs and lows for that day but also the forecast for the rest of the week. When I asked it for directions to a nearby coffee shop, it not only showed me the map along with traffic conditions, it also sent that information to my phone via Google Maps.

Searching on the web is great too because the Link View shows visually rich results as well as suggestions for follow-up queries. The Smart Display also comes with a Routines feature, which sets off a series of actions with a trigger phrase. "Good morning," for example, prompted it to show me the weather, the traffic on my commute, as well as the day's appointments. I also used it to make Google Duo video calls, which I found to be a pretty smooth experience. And, as you'd expect, you can use the assistant to set timers and alarms as well. 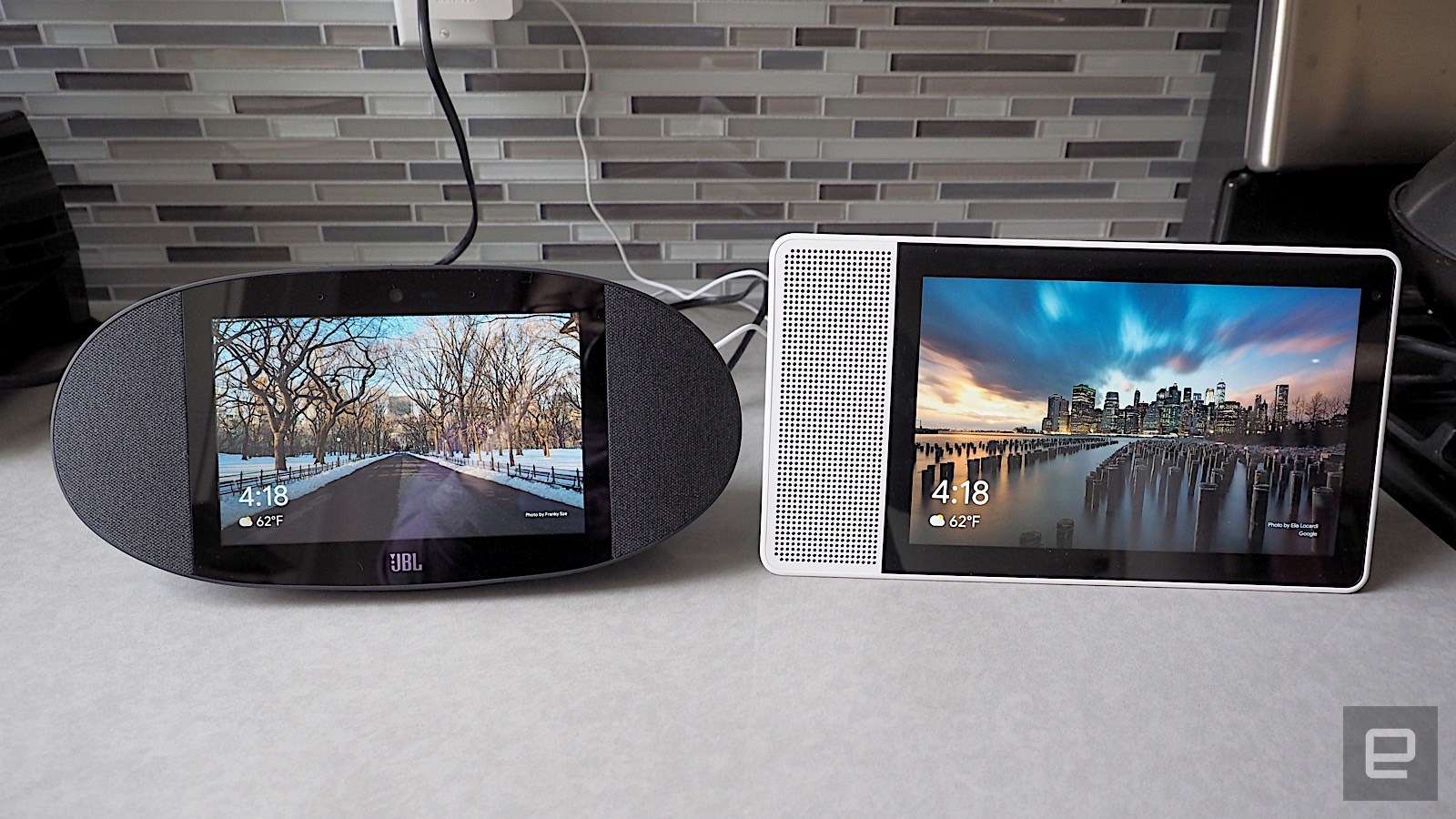 I mentioned this in my review of the Lenovo Smart Display, but it bears repeating here: The Google Smart Display works especially well in the kitchen because of how it displays recipes. Search for something like "fried rice," and it brings up a list of recipes from trusted websites like All Recipes and Food Network. I can then select one and go through step-by-step directions, all with my voice.

YouTube and YouTube TV are on here as well (though the latter requires a subscription), which is a nice little perk. I especially enjoy catching up on my favorite YouTube channels while making a cup of coffee in the morning. The only caveat here is that you won't get the full YouTube app experience here, which means you won't have access to your usual subscriptions and playlists. Instead, you just have to go to the video or channel directly by saying something like "Show me the latest Engadget episode on YouTube." You can still swipe through related videos at the bottom, but I would definitely have preferred to swipe and scroll through my YouTube list like I can on a computer or phone. 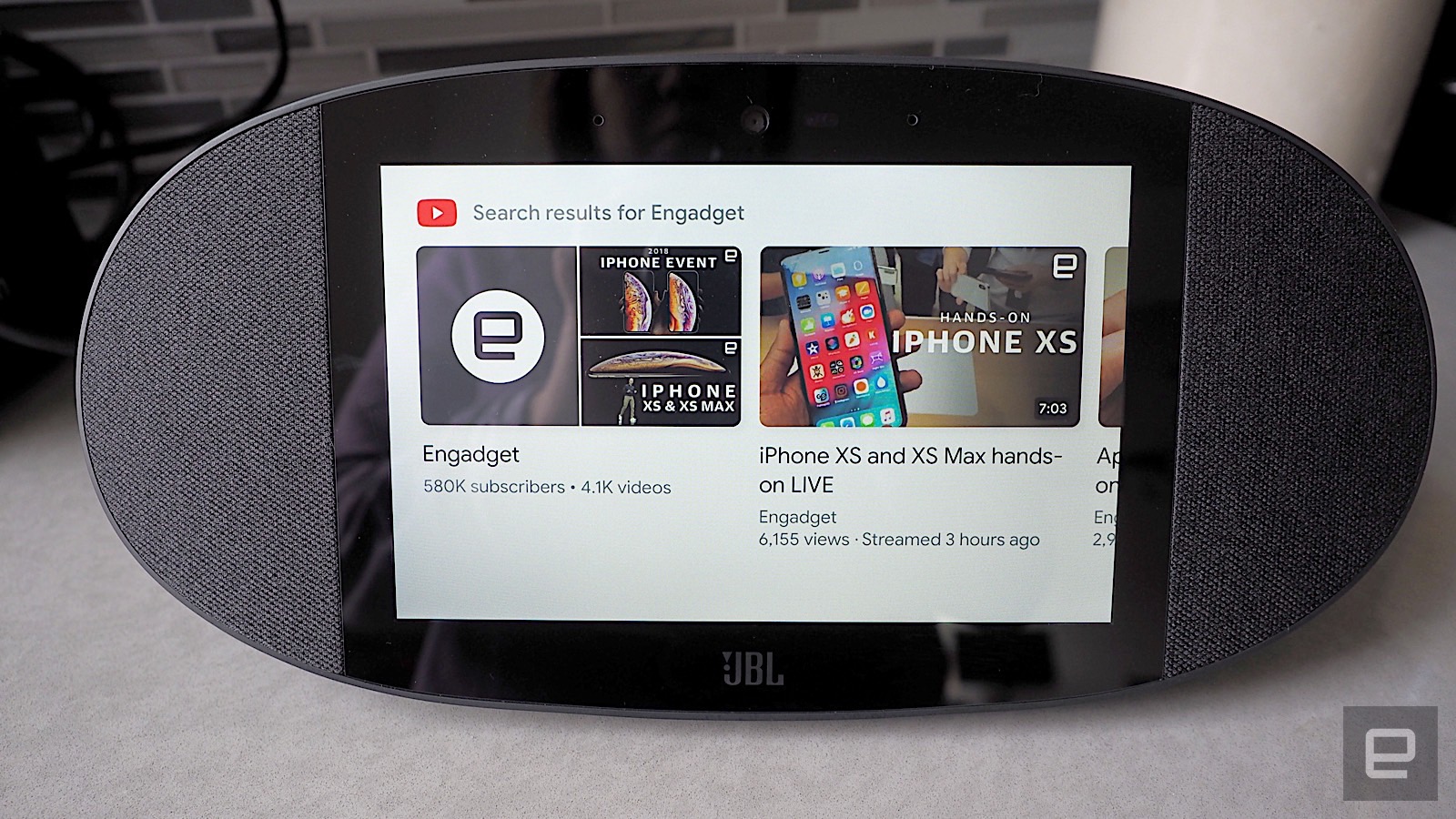 In the end, the JBL Link View functions very much like the Lenovo Smart Display. The choice between the two really comes down to what you want out of such a device: design or audio quality. The Link View isn't as stylish and the display isn't as crisp and colorful as the Lenovo, but the sound is a lot better. Yet, at $250 it costs the same as the 10-inch Lenovo and takes up the same amount of counter space, so the 8-inch screen is a bit of a disappointment. At that point, you might as well spend $200 for the 8-inch Lenovo, which takes up half the amount of room. Also, though it's not as good as the JBL, the sound quality on the Lenovo Smart Display is decent, at least for people like me who stop short of calling themselves audiophiles.

If you prize sound quality above all else, then the JBL Link View is the smart display for you. But if you're slightly more forgiving on the audio front and you want a sleeker, better-looking device, the Lenovo Smart Display is a better bet. Either way, you'll get a great smart display for the price.

In this article: gear, google, home, jbl, jbllinkview, personal computing, personalcomputing, review
All products recommended by Engadget are selected by our editorial team, independent of our parent company. Some of our stories include affiliate links. If you buy something through one of these links, we may earn an affiliate commission.