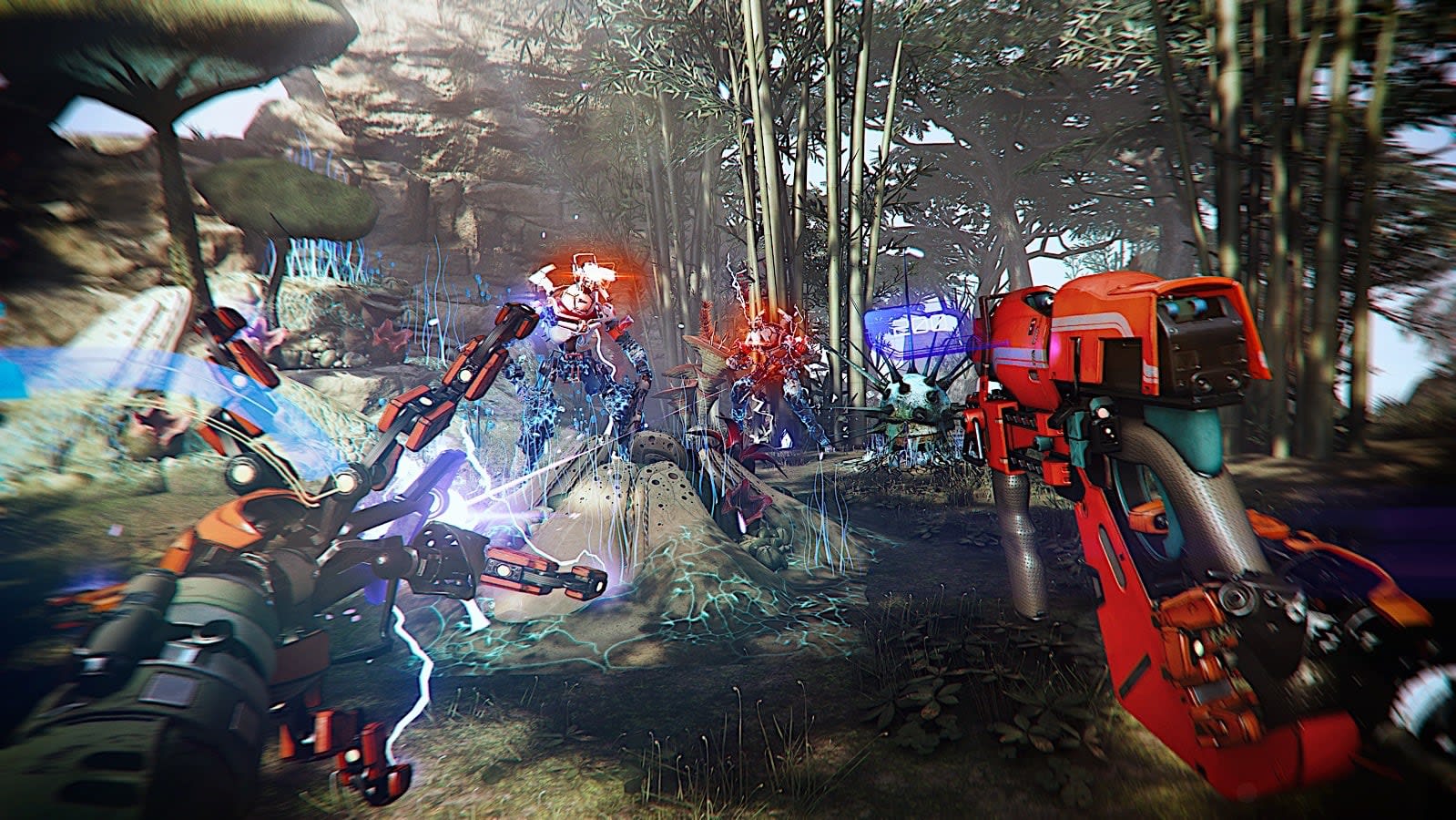 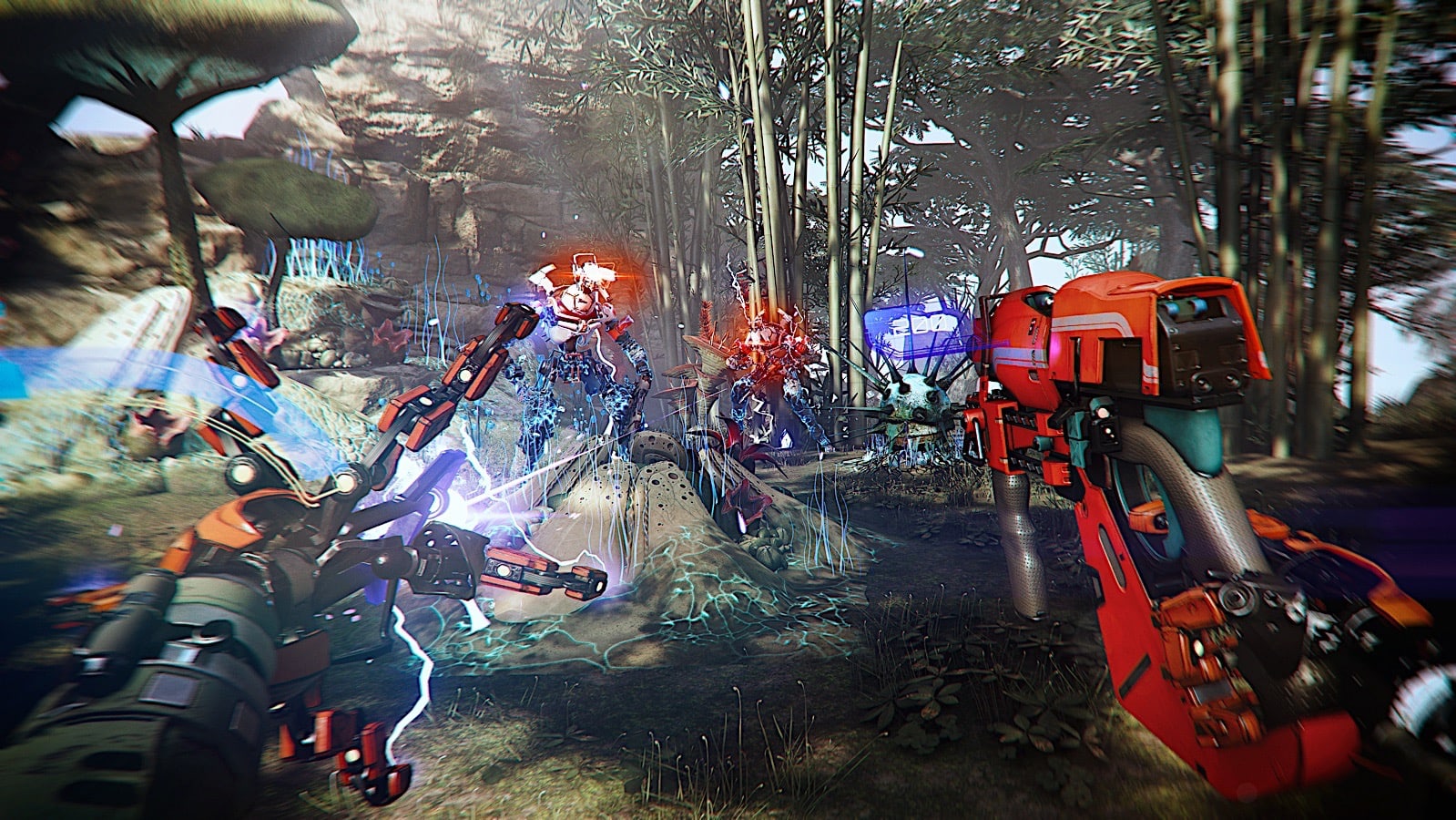 As Oculus hosts its annual OC5 event in San Francisco this week, the company isn't just looking back at its five years in existence, it's looking forward. Specifically to "the latest and greatest in gaming content," Steve Arnold, head of Oculus Studio Content, told assembled reporters at a preview event held the week prior.

"One of the 'aha' moments for VR for people is definitely multiplayer," Nate Mitchell, head of the Rift team, added. "Getting in VR with someone else, really feeling like you're truly there in a way that you can't do with traditional games is one of the little bits of magic that we've seen VR developers working on."

I definitely felt a bit of that magic in a pair of these games on display: Vox Machinae by Space Bullet Dynamics Corporation and Stormland by Insomniac Games. Both feature robots of various sizes and dispositions and both place multiplayer gaming front and center. The two diverge wildly on how they go about fomenting team-based play yet do so with equal success. 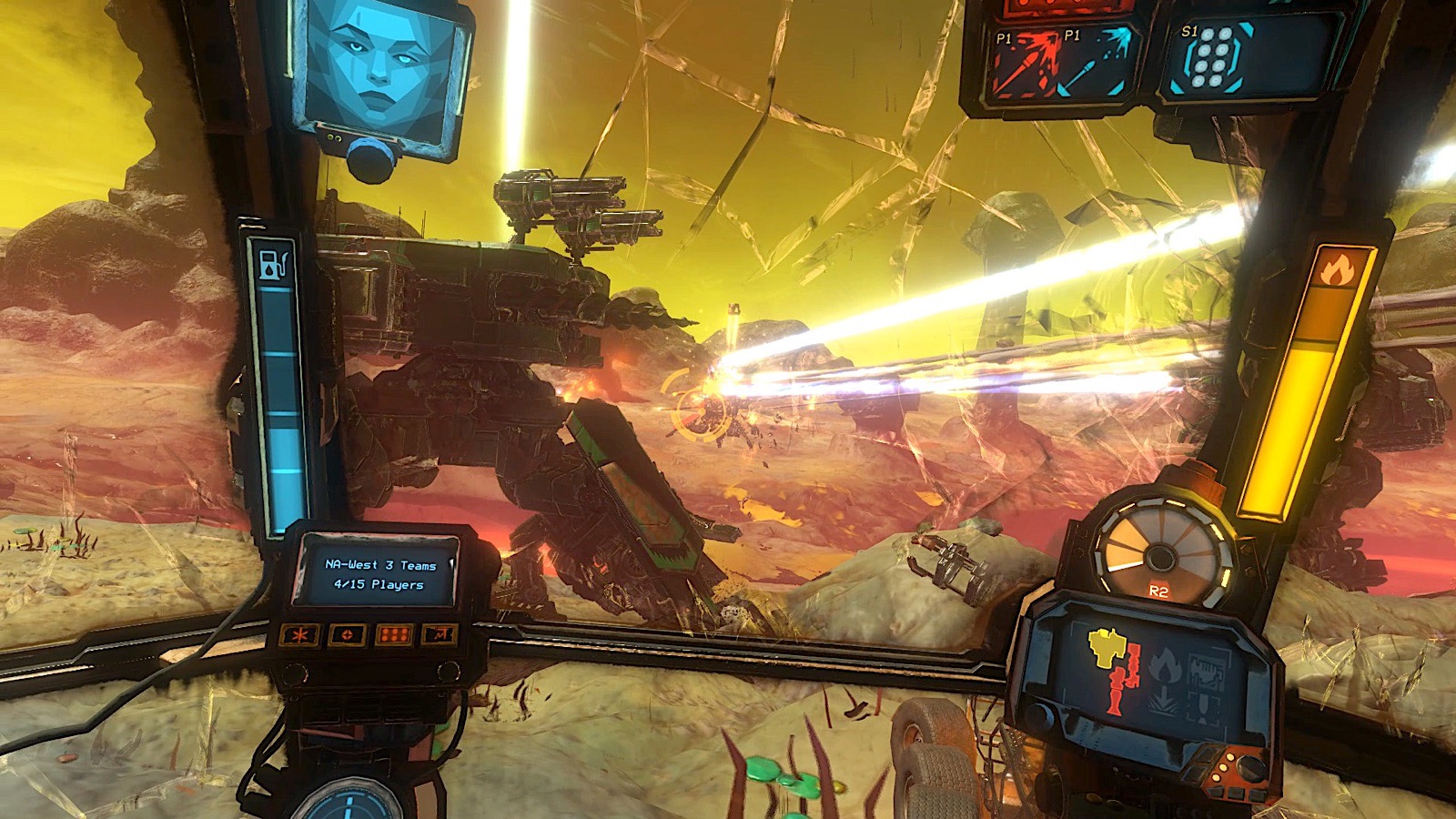 Vox Machinae is MechWarrior for the VR generation. You pilot a gigantic robotic fighter armed with lasers, missile arrays, proton charge cannons and a host of other implements of mayhem in squad-based multiplayer combat. And by pilot, I mean like from the cockpit. Your view is through the windscreen -- you look down and, whoop, there's your legs. And since the visual tracking is tied to movements of the Rift headset, the view is uncannily realistic. I felt like I was sitting in the cockpit of a 7-story metal monstrosity.

The controls were equally realistic. To turn the cab of the robot, you'd have to physically reach out with your right hand and "grasp" a twistable VR knob. The mech's forward motion was controlled through the left hand by a digital version of the clutch system from a riding lawn mower -- run away, reverse, neutral, drive, and ramming speed -- while pulling on a separate knob engaged the jump drives to lift the behemoth into the air for a short time. 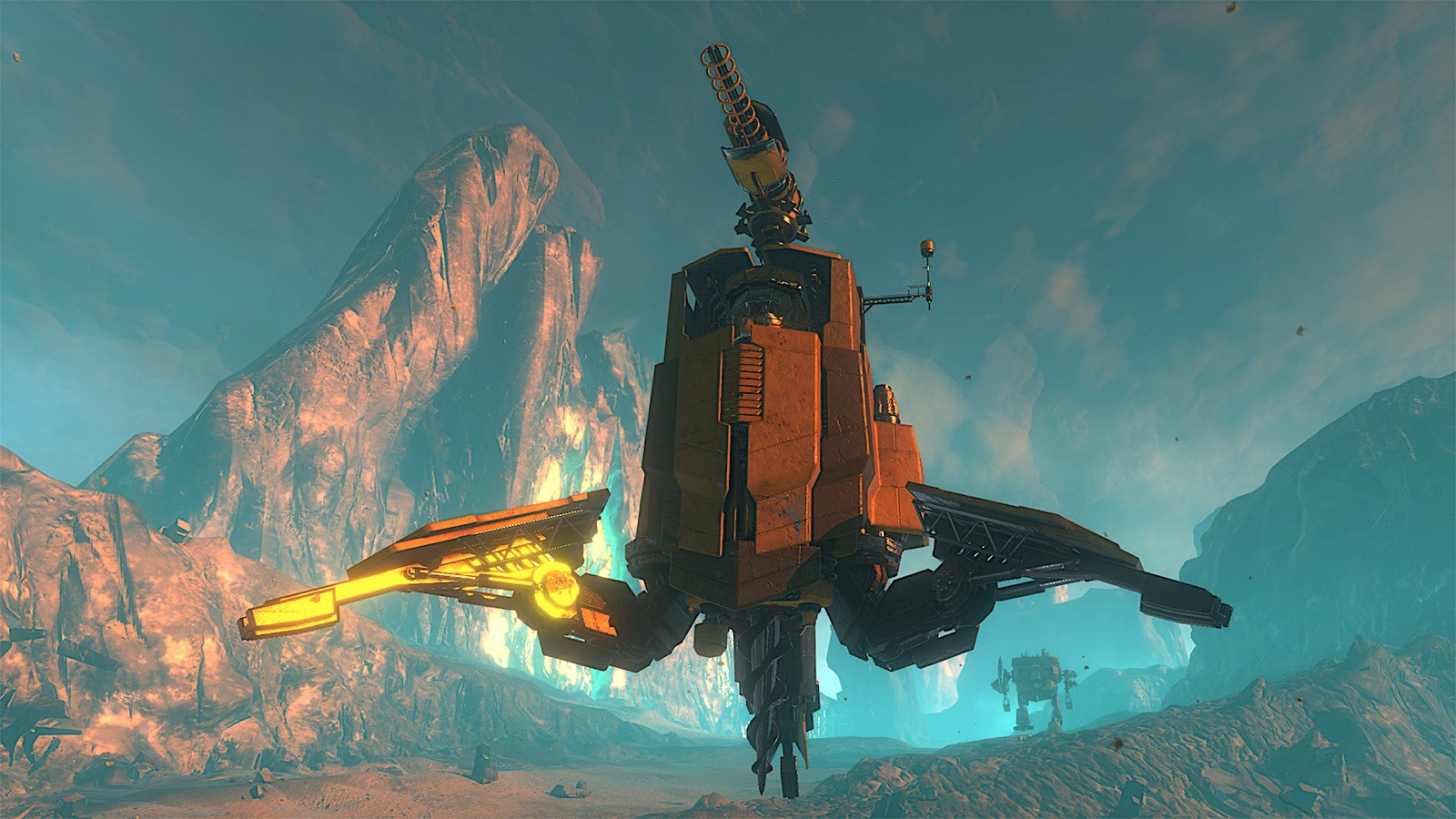 It was all very adventurous, pulling knobs, smashing button sequences and twisting handles to keep what is essentially a giant, flying tank with legs on course while ducking enemy fire, shoving radar targeting monitors out of your field of vision to get a better view of the action, all while hoping you won't have to pull the double handles in your lap and punch out. Luckily, aiming was tied to the movement of the Rift so wherever you look is wherever you shoot, though that makes them no easier to hit because you still have to lead your target, this time with your nose.

I was only able to play as a single class of robot with a set armament during the demo but the other players and CPUs that I competed against came in a variety of shapes and sizes. Since VM is designed as a PvP arena-style multiplayer, teamwork is, of course, key. Players work in teams of up to 16 per side to complete various goals like defeating more of the enemy in a set time or capturing and holding territory. Pretty standard stuff. Still, the gameplay was fast paced and fun. Imagine CoD multiplayer but in mechs with the ability to cooperate through an in-game communications system (VR CB radios!) and strategize attacks. Or you could always just go in guns blazing. Both ways are fun. 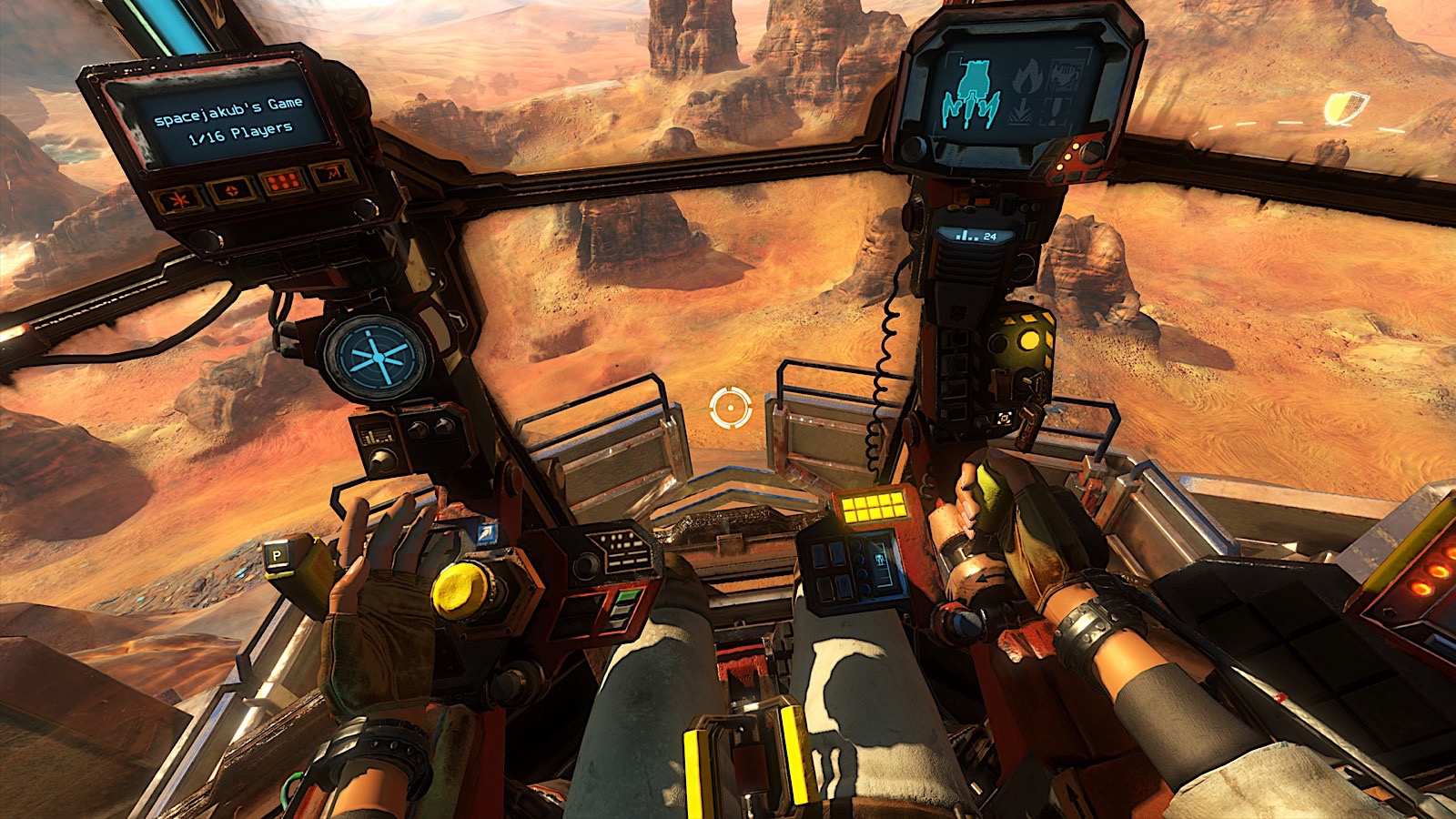 Vox Machinae relies on bots to fill in for open roster spots during games but, during my demo at least, they were fine. Perfectly competent teammates and better than me at the start, to be honest. Whenever a human player does want to join, since the game uses a drop in/drop out system, the new player automatically replaces one bot until everybody playing has an actual um, you know, body.

The game will play with the Rift, obviously, but is also compatible with the Vive and there's a desktop iteration as well, the latter of which enables players to use either the traditional MechWarrior-esque keyboard and mouse setup or a modern gamepad. The VM platform will allow for a variety of party types. Users will be able to set up both private and public networks, as well as LANs, to manage various instances of the game. 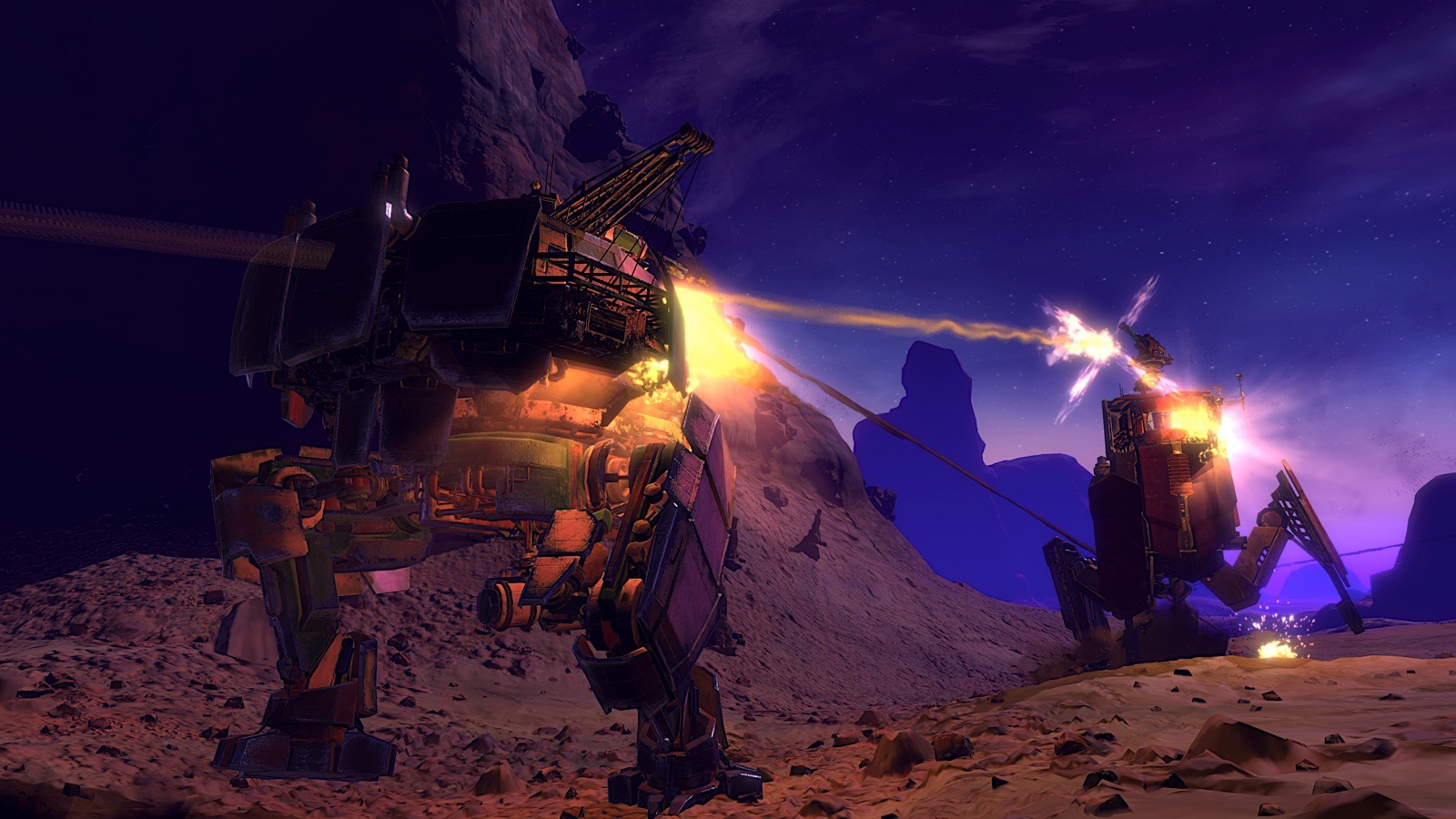 To keep the in-game communications this side of civil, individual players can mute any jerks in their ears, plus the owner of the instance can kick trolls at will. The developers are also working on more advanced and comprehensive moderation systems, group vote-to-kick mechanisms for example.

Vox Machina is available for download from the Oculus store for $25. 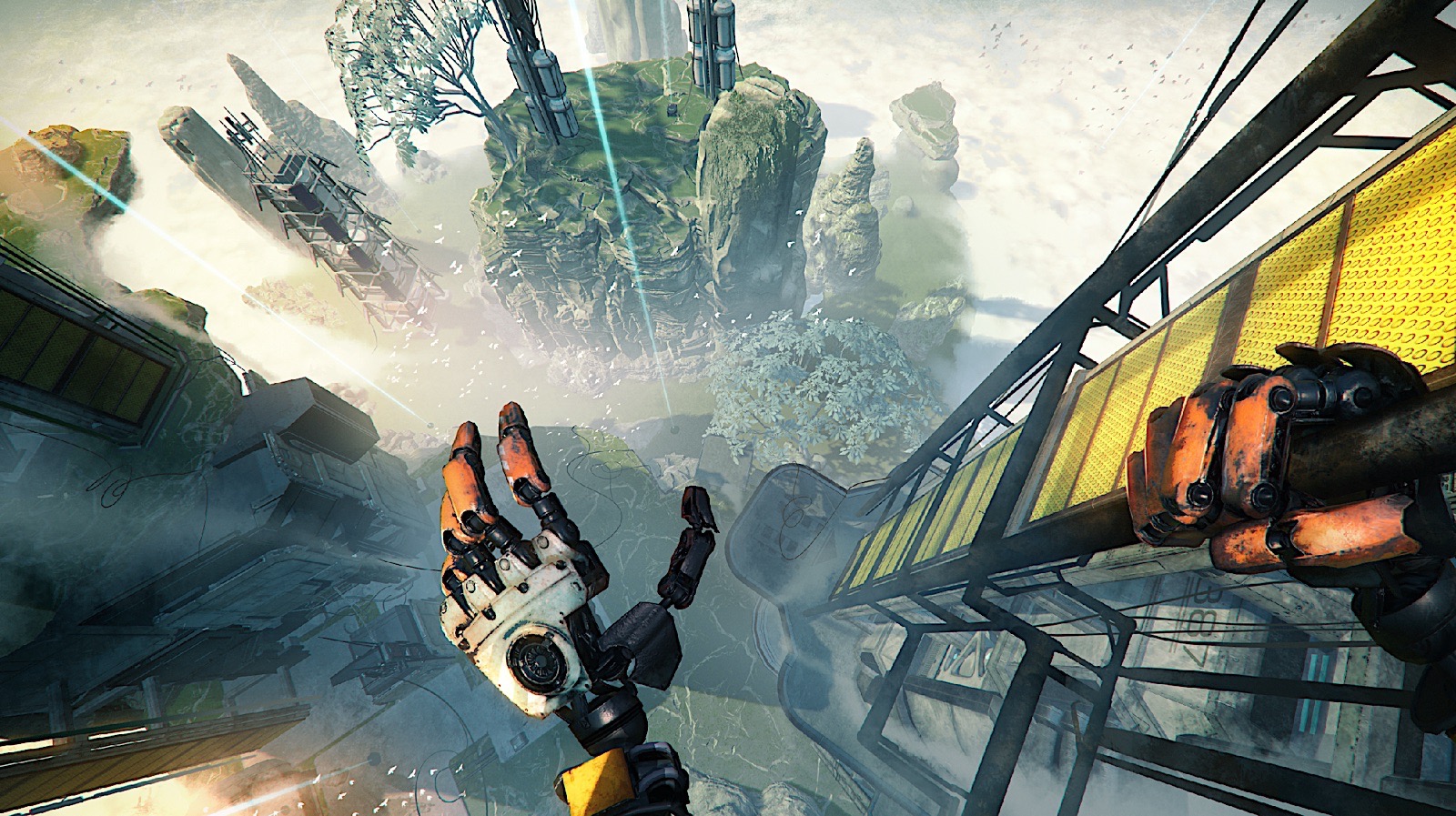 If online PvP gameplay -- even if it's in gigantic steel carapaces of awesomeness -- isn't what you're looking for in a VR experience, Stormland might be a bit more your speed. In this open world adventure, you play as an android tasked with exploring a massive -- and ever-changing -- landscape in search of your friends. Along the way, you can collect alloys and salvage materials to upgrade body parts and mod your abilities with implantable chips. Think Halo-style FPS combined with Assassin's Creed-style missions but everybody is a robot.

The visuals were nothing short of stunning. The initial tutorial takes place in an arid, windswept vista but the player is quickly through the basic movement training and stepping onto a raised platform that rockets them through a thick cloud layer onto the lush, nearly tropical, landscape of the game's first level. There the player is tasked with learning how to shoot, activate their defensive shield, eat fruit to regain health (yes, robots eat fruit to regain health apparently), and scale vertical walls with their bare, robot hands. 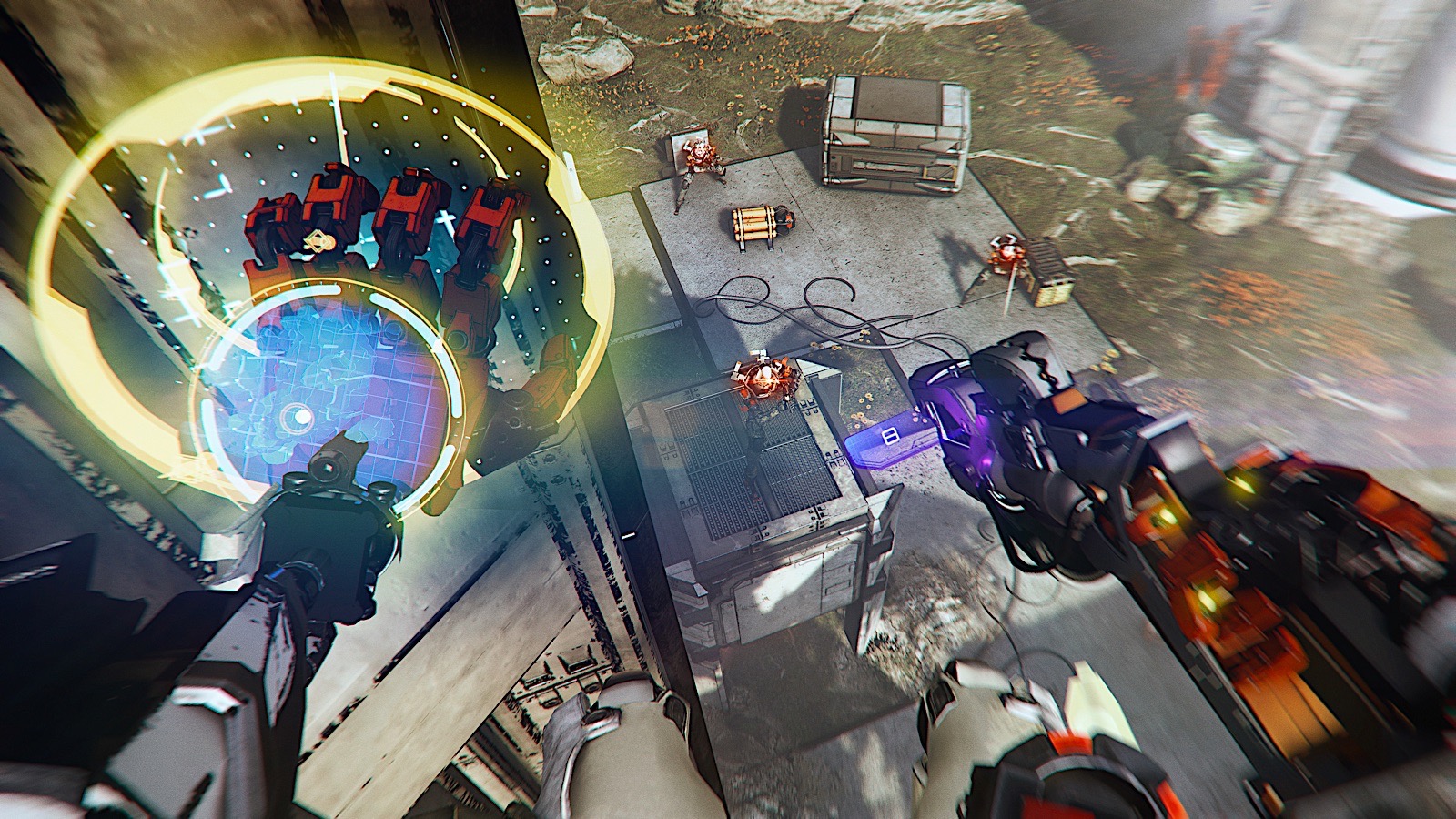 The controls were spot on. Aiming was accurate, actions like gliding from high points and "slipstreaming" between islands was intuitive. Even the climbing action was really responsive. I found myself flicking my android avatar up sheer cliff faces as easily as snapping my fingers. Or manipulators, whatever. I also really dug the way my avatar ran. Rather than a human's loping stride, my character ran like Nunzilla on fast forward. This staccato movement, oddly enough, helps to steady the aim.

Being an adventure title, Stormand offers a mix of primary and secondary mission sets as well as an impressively expansive map to explore. During my demo, for example, I was tasked with taking over one of three radio towers as well as replenishing 100 points of health by eating fruit. 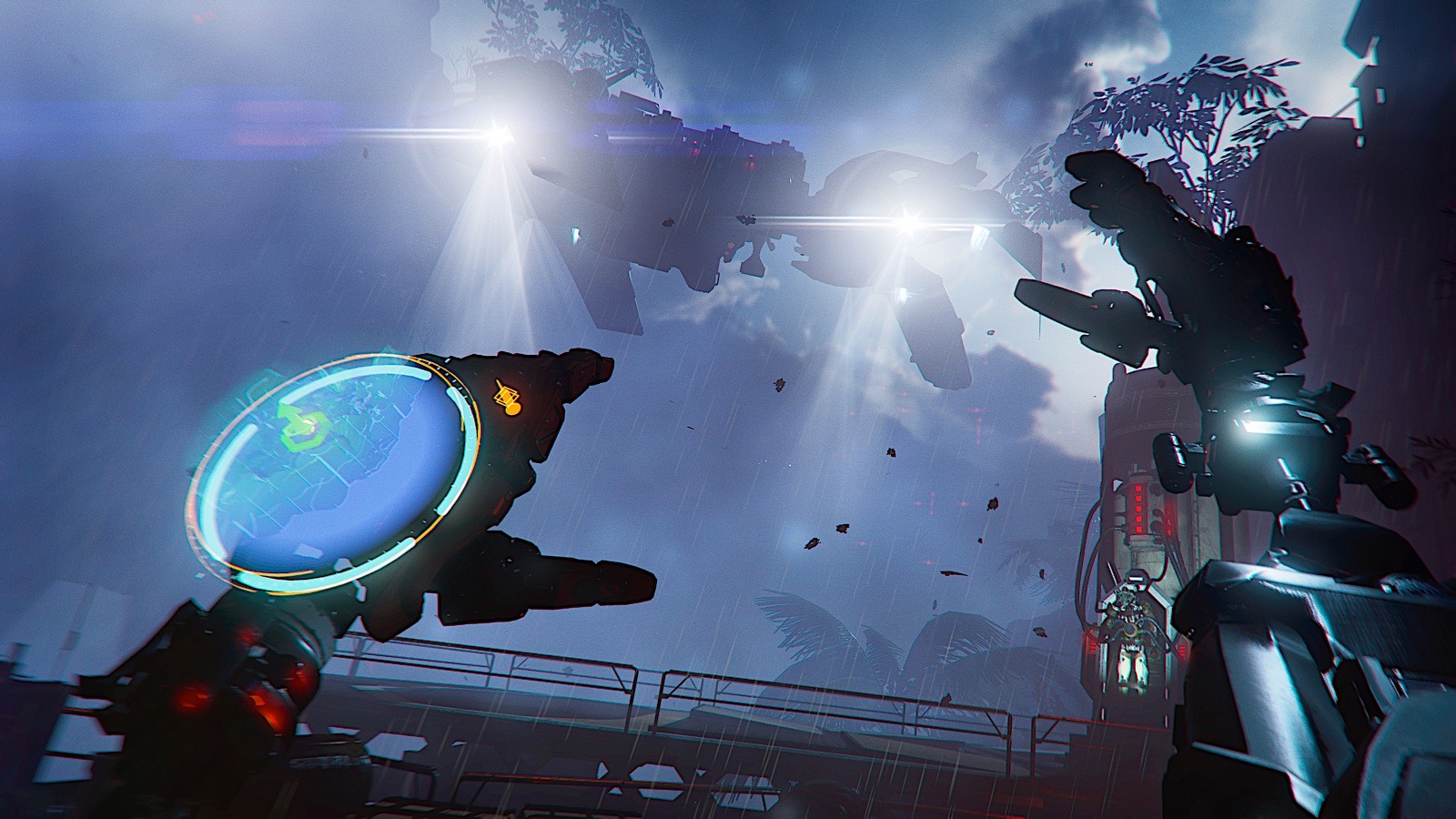 What's really cool about the game is that it continually changes. As Insomniac's Mike Daly explained to Engadget, the game won't be generative in the way that No Man's Sky is, but various levels, areas, and available missions will be regularly shuffled and reimagined by the devs. This won't be a DLC by any means but rather an organic aspect of the Stormland universe, occurring whenever the devs feel like it -- be it every few weeks, at the changing of the seasons or on major holidays. The developers expect to include a mix of single and multiplayer content. There will be a general story mode as well as a number of available co-opt missions.

Stormland is slated for release in 2019, there is no price for it set yet.

In this article: av, facebook, gaming, hands-on, InsomniacGames, oc5, oculus, oculusconnect5, Stormland, voxmachinae
All products recommended by Engadget are selected by our editorial team, independent of our parent company. Some of our stories include affiliate links. If you buy something through one of these links, we may earn an affiliate commission.