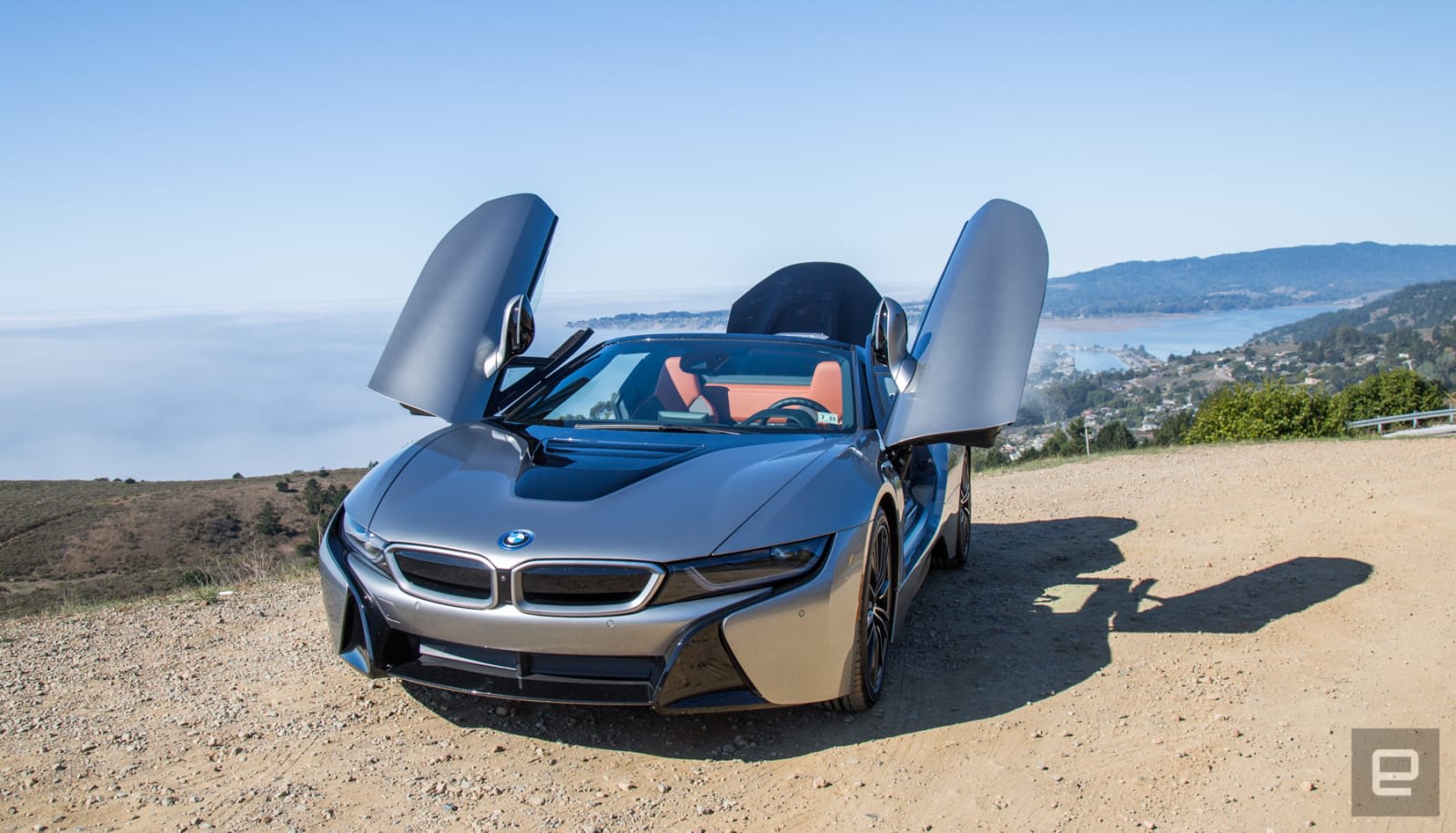 I'm a firm believer that cars can be art. Rolling pieces of design that are a snapshot of a point in time. Very few vehicles do that more right now than the BMW i8 Roadster. A supercar that's got one foot in the future and the other in the now. Except it's not really a supercar; it's something else, and that's OK. The hybrid i8 Roadster's specs (starting at $163,300) aren't that exciting at first glance. The three-cylinder (that's right, just three), engine along with the electric motor pump out 369 horsepower and 420-foot-pounds of torque and It'll do zero to 60 in 4.4 seconds. Impressive, but not really supercar impressive. For comparison, the new BMW 8 Series convertible has a whopping 523 horsepower.

During my driving, I never really experienced what you would call supercar acceleration. Instead, it was more like sports car acceleration with the fun whir of an electric motor thrown in for good measure. 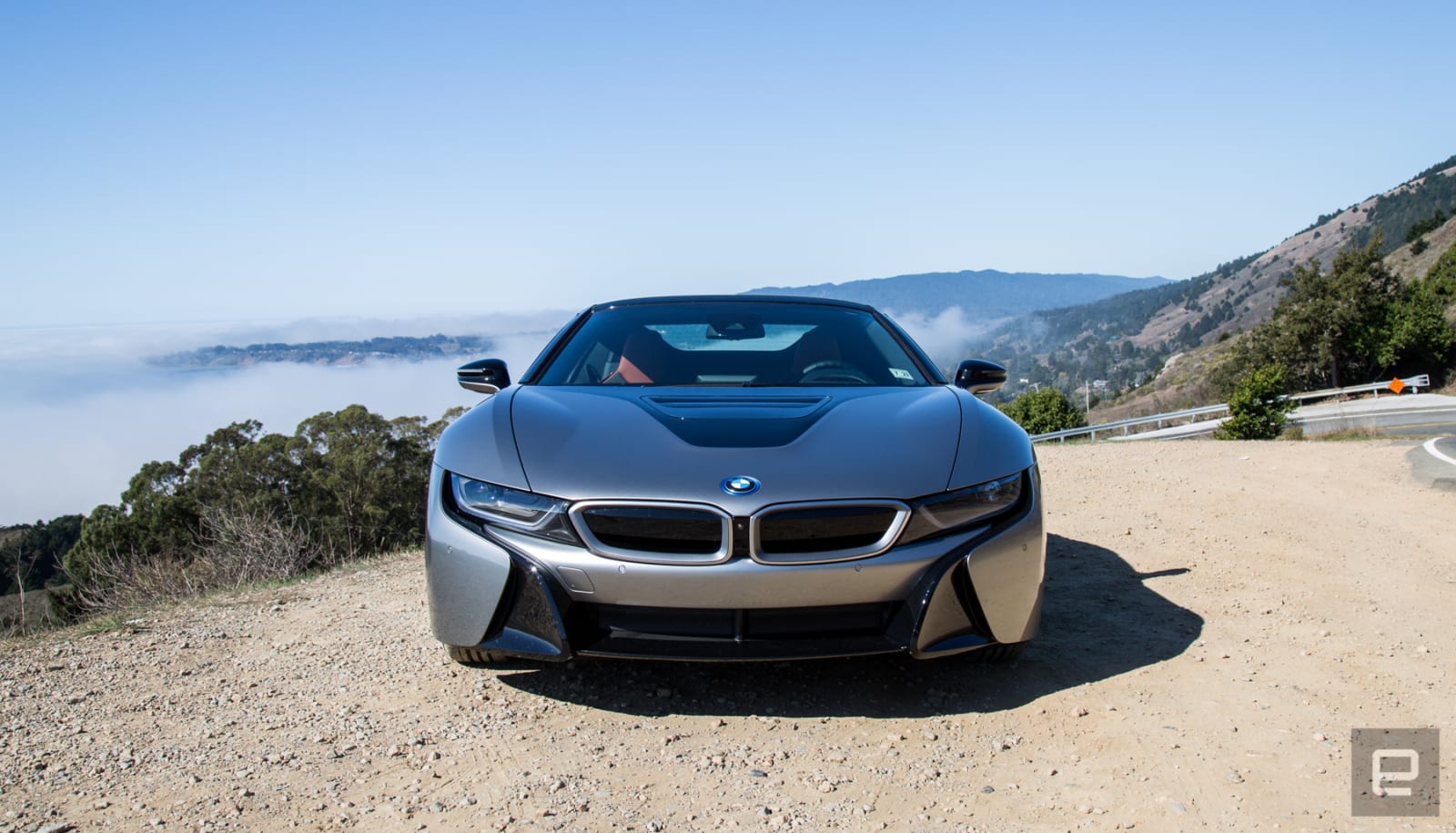 It's that electric motor that sets this apart from other extravagantly designed cars of the world. It's supported by an 11.6 kWh battery and in ideal conditions, has a 30-mile range in EV-only mode. Sure, it won't break any Nurburgring track records, but you can cruise around town without scaring the hell out of the neighbors whenever you step on the accelerator.

Again, that's not really something some people want from a supercar. They want a loud, brash experience. Like folks on Harleys who rev their engine for no reason, they want to be heard. Barking dogs and car alarms are their audience, and they're not happy until a chorus of chaos trails behind them. If you're that person, the i8 Roadster is not for you.

For the driver that wants a car that's a crowd (and Instagram) magnet, the i8 is wholly capable. During my week with the vehicle, I had more people ask me about it or randomly take photos of it (and hopefully not me) than any other car I've driven. Way more than the Tesla Model 3, which was, up until the BMW showed up, the car that started the most conversations.

It helps that it looks like it was designed to be launched into space to battle Cylons or the Empire or even those baddies from Robotech (Macross Saga). Then there are the "butterfly" doors that, when opened, feel like they should spew steam or fog. 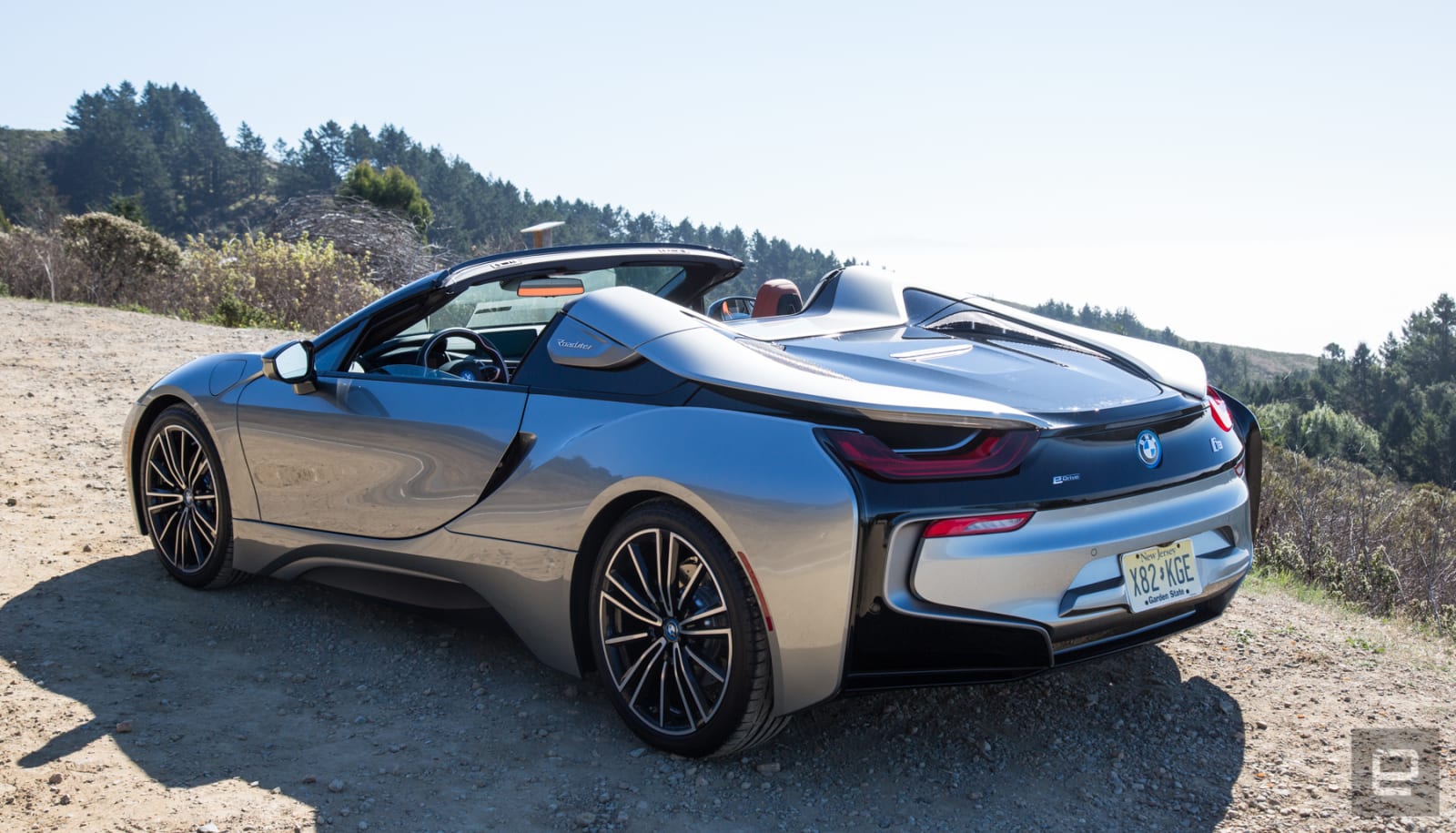 When the doors are closed and you're driving around, the i8 is pleasant. Especially in Comfort mode, where I didn't get jostled by every crease and crevice in the asphalt. Because of this (along with the very familiar BMW interior), when you're driving through traffic, you soon forget that the exterior looks the way it does. It's a capable daily driver, both on the highway and in the city. The smooth acceleration afforded to it by the electric motor makes it fun to dart through traffic, and once the battery is depleted, the engine kicks in with a subdued roar.

In Sport mode, the dash transforms from chill blue to angrier orange. Around mountain switchbacks, the i8's neutral steering kept it glues to the road. Just point the all-wheel-drive i8 Roadster and it delivers amazing traction in an extremely smooth fashion.

A bit too smooth, I might say. The car's electric steering lacked the amount of road feedback I want from a car -- it felt more like I was steering in a video game than in real life. BMW has done a great job keeping the car on the road, I just wished it could adjust it once more with feeling.

While the engineering under the hood is an impressive combination of a small engine and electric motor, the i8 doesn't get the fancy driver assistance features of other BMWs. That's not surprising really -- no one buys a car like this for lane-keep assist. Also, those features add weight to a car and the Roadster excess of carbon fiber suggests BMW wanted to trim as many pounds as possible. To add more weight to a car that's dash and door jamb looks like the automaker bought all the lightweight material on clearance doesn't make much sense. 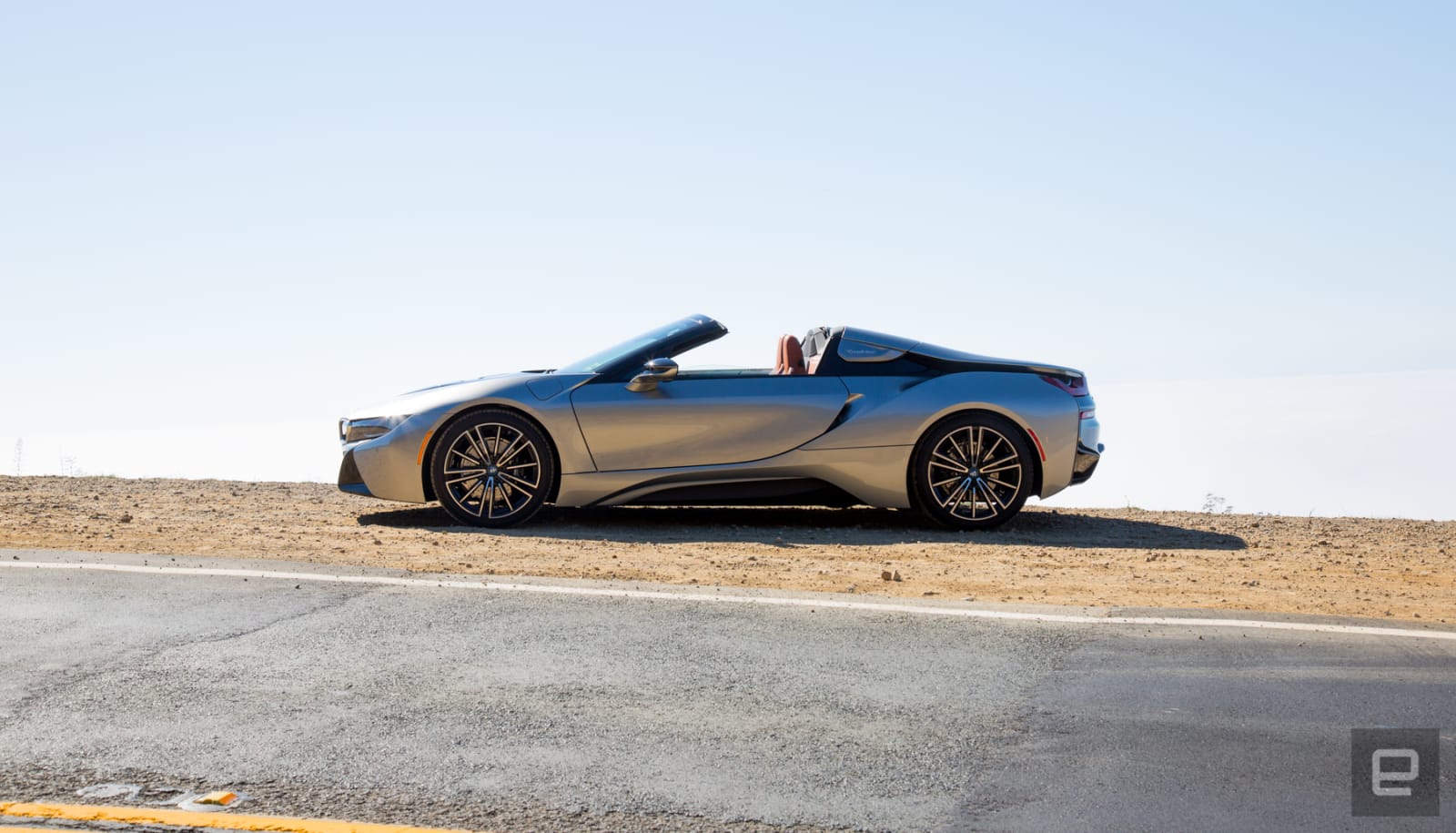 That said, you will get the extra weight (132 pounds over the coupe version) of a convertible roof. It's worth it, though. With the top down, the car looks better than its fixed-roof brother. BMW did take the rear seats out of the roadster (not that anyone taller than a toddler could have fit in those, anyway) and put little cubby holes to store stuff. I actually used them for smallish backpacks and camera cases (and that's about it). It still has a trunk, but once you put carry-on luggage in it, you're done -- you could use it for a weekend getaway, but pack light.

The BMW i8 Roadster sits in a weird spot in the automotive world. It looks and corners like a supercar, but you're going to be disappointed in a drag race with anything that resembles it. Instead, it's a rolling piece of pricey art and technology that has great gas mileage (up to 69 mpg) and is comfortable enough to drive every day. Even with its lack of road feel, it's fun to drive around sharp corners. 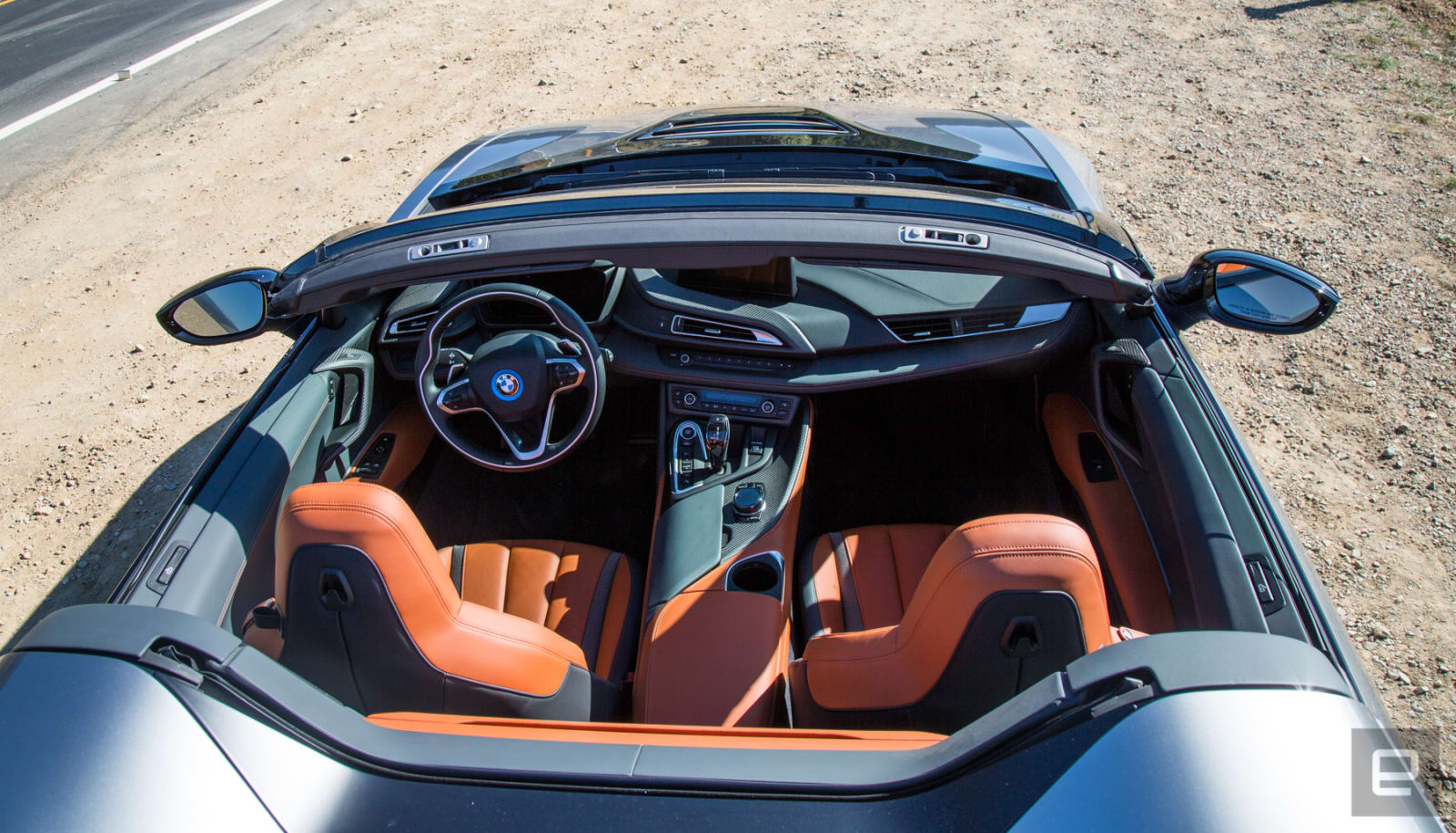 Ultimately, it's a refined piece technology that turns heads. Technology that also means you won't need daily trips to the gas station. It's fun without being overbearing. It's also a convertible, which is always a plus in my book. And those doors are insane, but they're fun. Ridiculous fun.

In short, the i8 isn't a supercar. Instead, it's a super car.

Source: BMW
In this article: bmw, business, design, gadgetry, gadgets, gear, green, i8, i8roadster, supercar, transportation, uk-reviews, video
All products recommended by Engadget are selected by our editorial team, independent of our parent company. Some of our stories include affiliate links. If you buy something through one of these links, we may earn an affiliate commission.