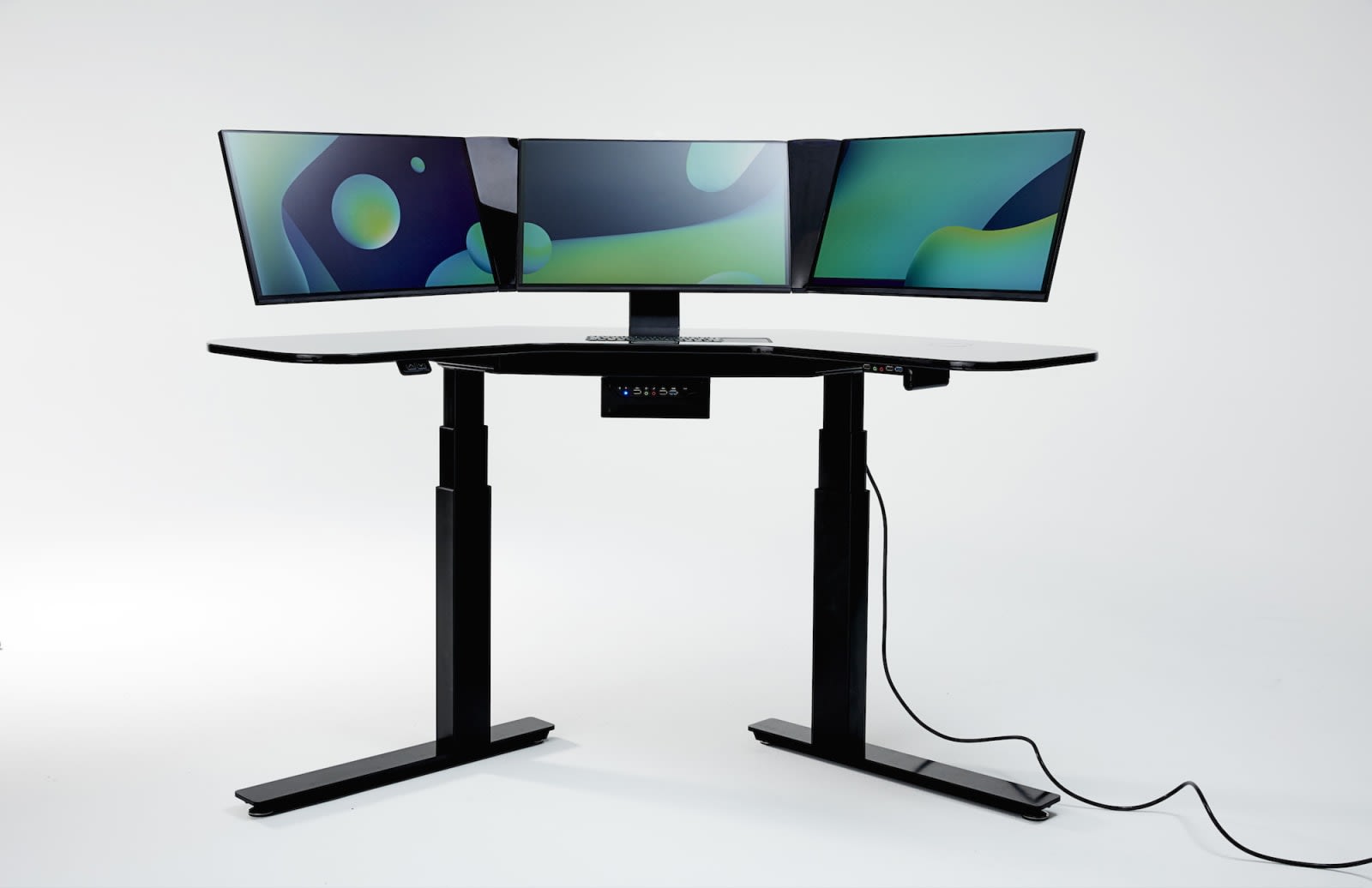 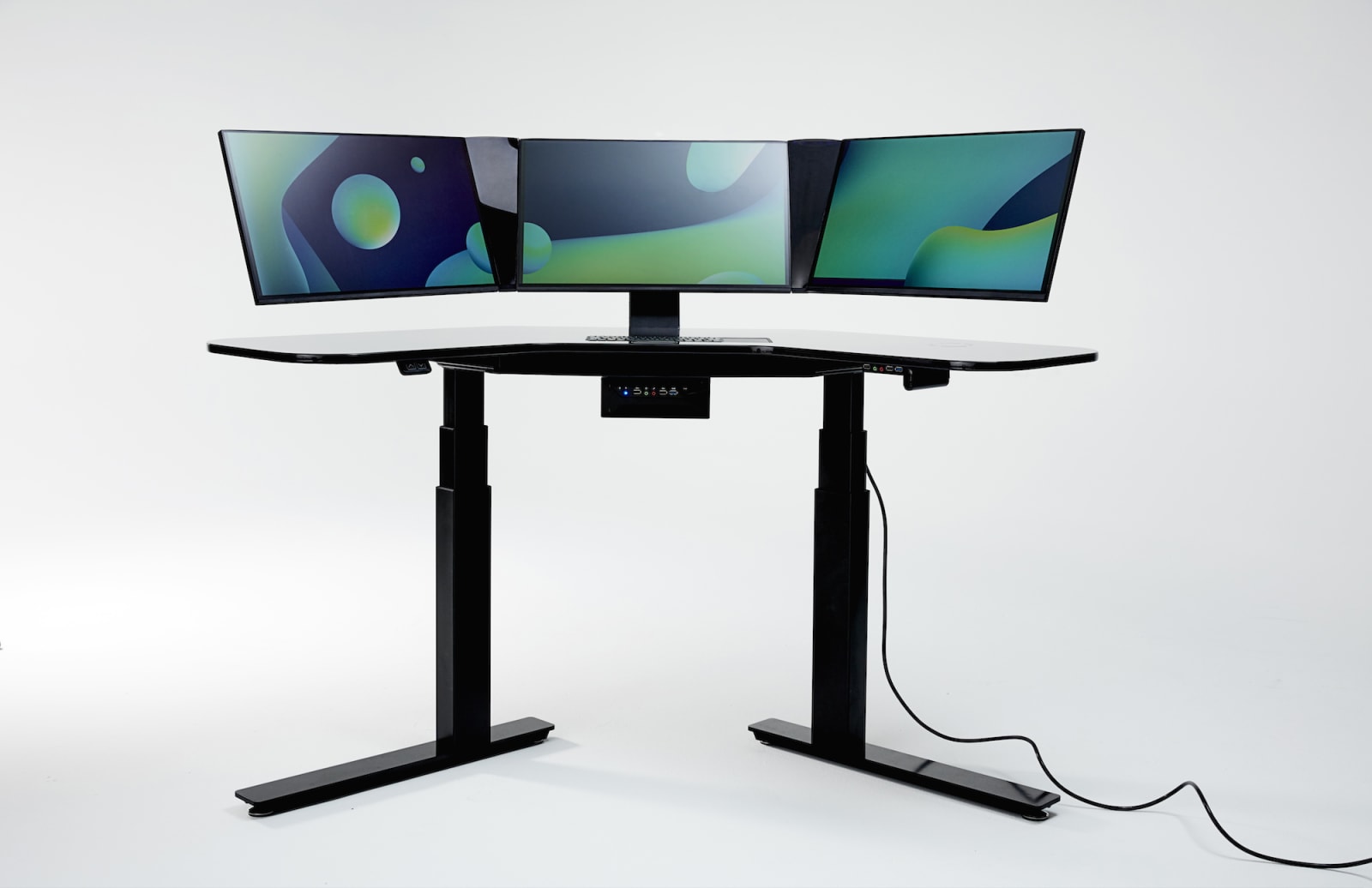 "All-in-one" computers typically combine the PC and the monitor in a single unit, such as an iMac or a Surface Studio. But what if that "all-in-one" system has three monitors instead of one? Or an integrated keyboard and trackpad? Or a document scanner? Oh, and it's all built into a standing desk too? Well, then you'd be describing the Cemtrex SmartDesk, which redefines the "all-in-one" PC as a piece of futuristic furniture. The SmartDesk was announced earlier this year but will be available to the public soon. The price starts at an eye-watering $4,499. I took a look at a late-stage prototype of the SmartDesk at an office in San Francisco, and it's just as intimidating and unusual in person as it appears in photos. Three-monitor setups are nothing new, but the single standing desk structure felt distinctly sci-fi as if I was in some kind of mission control cockpit ready to receive messages from Starfleet Command.

All three 24-inch monitors are also touchscreens, and you can literally drag and drop one window to the other with your fingers. But rather than doing that, I made use of Cemtrex's proprietary Stark gesture system that allowed me to move windows between monitors with just a couple finger taps. If I wanted to move one window from right to left, I'd tap my middle finger and then my forefinger in succession.

What really adds to the sci-fi feel, however, are the touchless gestures. A Leap Motion sensor is built into the surface of the desk, right underneath the trackpad, meaning I could scroll through documents and web pages by flicking a couple fingers, zoom in and out by moving my hands together (or apart), and flip through presentations by just waving my hand. It definitely reminds me of how Tony Stark interacts with Jarvis in the Marvel movies.

That said, these interactions can be a little finicky. Tapping the screen didn't always move the windows I wanted, and I couldn't get the screenshot gesture to work at all. A spokesperson told me that when you first power up the SmartDesk, it'll walk you through a tutorial of how to use the gestures. I imagine you might get used to the gestures over time, but based on just a few minutes with it, I found the touchscreen controls more intuitive than waving my fingers and hands around, as sci-fi cool as it might be.

As mentioned above, the keyboard and trackpad are built into the surface of the SmartDesk. This means the keyboard lies completely flush with the desk. While I found it perfectly serviceable -- the keys click and clack in a satisfying way and I didn't find the travel between keys to be a problem -- the flatness of the keys bothered me immensely. I'm so used to having a raised keyboard and I also prefer having a keyboard I can move around, instead of having one fixed in place. 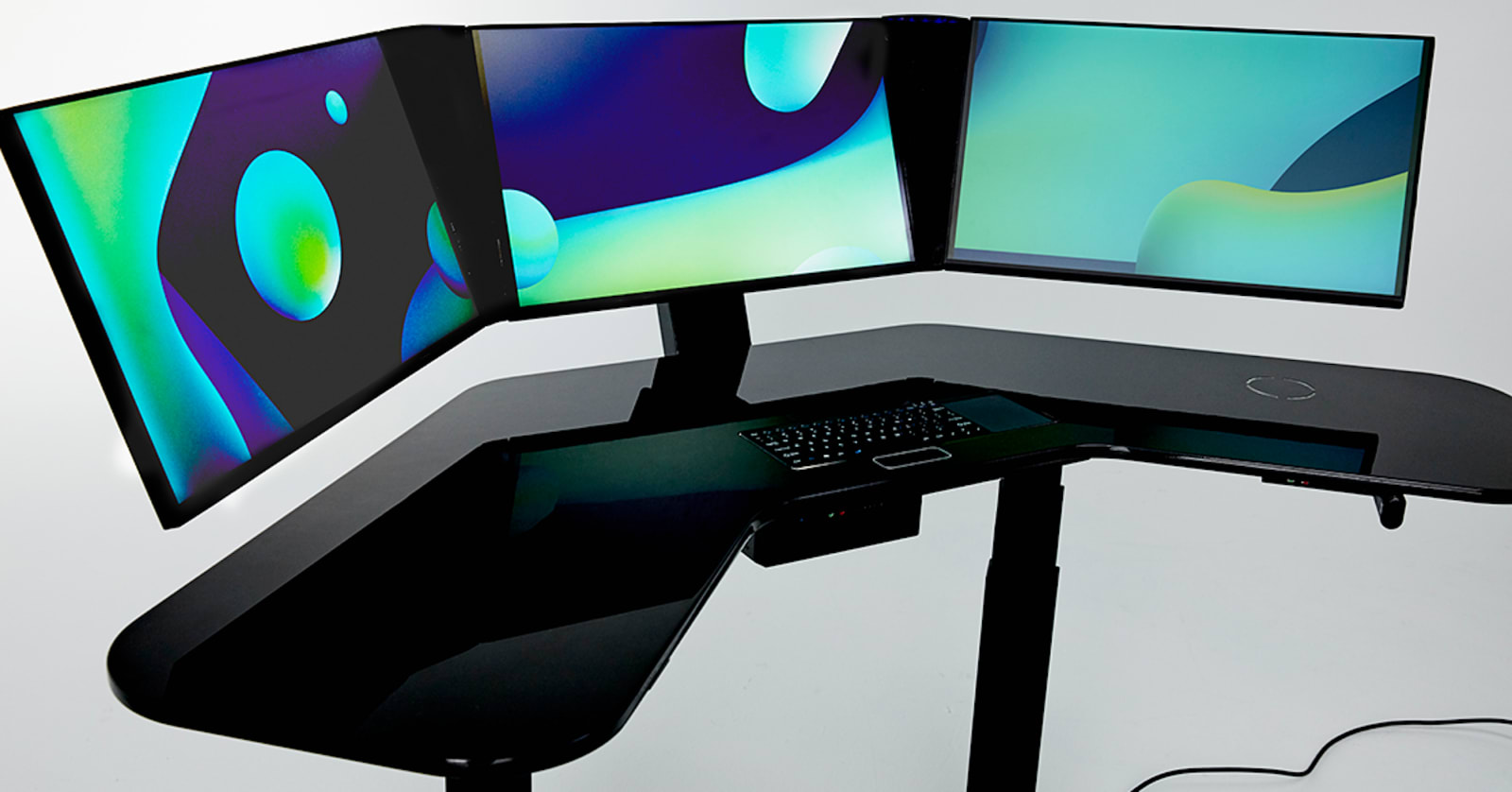 According to Cemtrex, the keyboard is flat so that you can lay things on the surface without disrupting your workflow. Plus, the design means you can use your own keyboard if you wanted to. While I appreciate the idea, it seems a little silly to spend so much on a SmartDesk then to spend even more money to customize it to my liking.

The trackpad itself is fine -- it works just as well as most laptop models. I did find myself accidentally smudging the Leap Motion sensor a lot, as it's located beneath the trackpad -- which led to unintentional gestures or the sensor not working very well. To the right of the trackpad is a Qi wireless charger built into the surface of the desk, which is handy for charging a compatible phone. I rested my iPhone XS on there, for example, and it instantly began charging.

There's a 5-megapixel 1080p camera located between the center and right monitor for video calls, as well as a document scanner placed between the center and left monitor. The latter appears to be a downward-facing camera that "scans" any document that you place under it. I placed a piece of paper underneath the scanner, and the software easily recognized the document and captured it. It does the job well enough, but probably not any better than what I could accomplish with a smartphone. 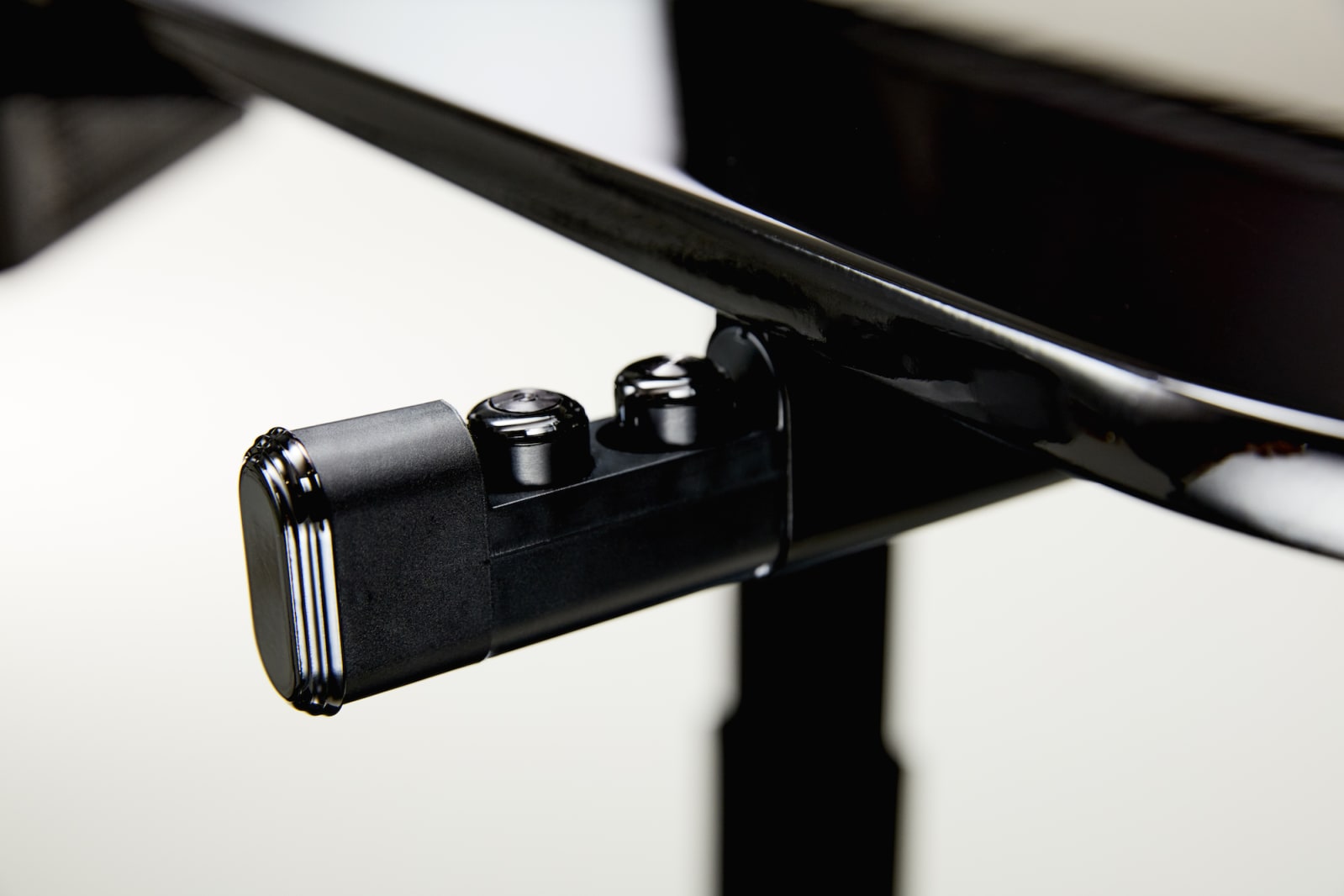 On the left side, there's a tiny drawer that pops out to reveal a pair of magnetic earbuds. They're completely wireless much like Apple's AirPods. According to Cemtrex, these earbuds are designed to be paired with your corporate phone system so you can take calls without having to use an actual phone. Of course, if you work from home, they can be paired with your smartphone, too.

As mentioned up top, the SmartDesk also functions as a sit/stand desk. I initially thought the PC would hit up against my knees when sitting, but the hardware was sufficiently tucked in that it didn't happen, even with my legs crossed. I will say, however, that I found it uncomfortable to use any of the touch controls or gestures while sitting down -- it felt much more natural to be waving my hands around while standing.

If you haven't heard of Cemtrex before, that's likely because it's mostly known in industrial manufacturing circles. The SmartDesk is the company's first consumer product. 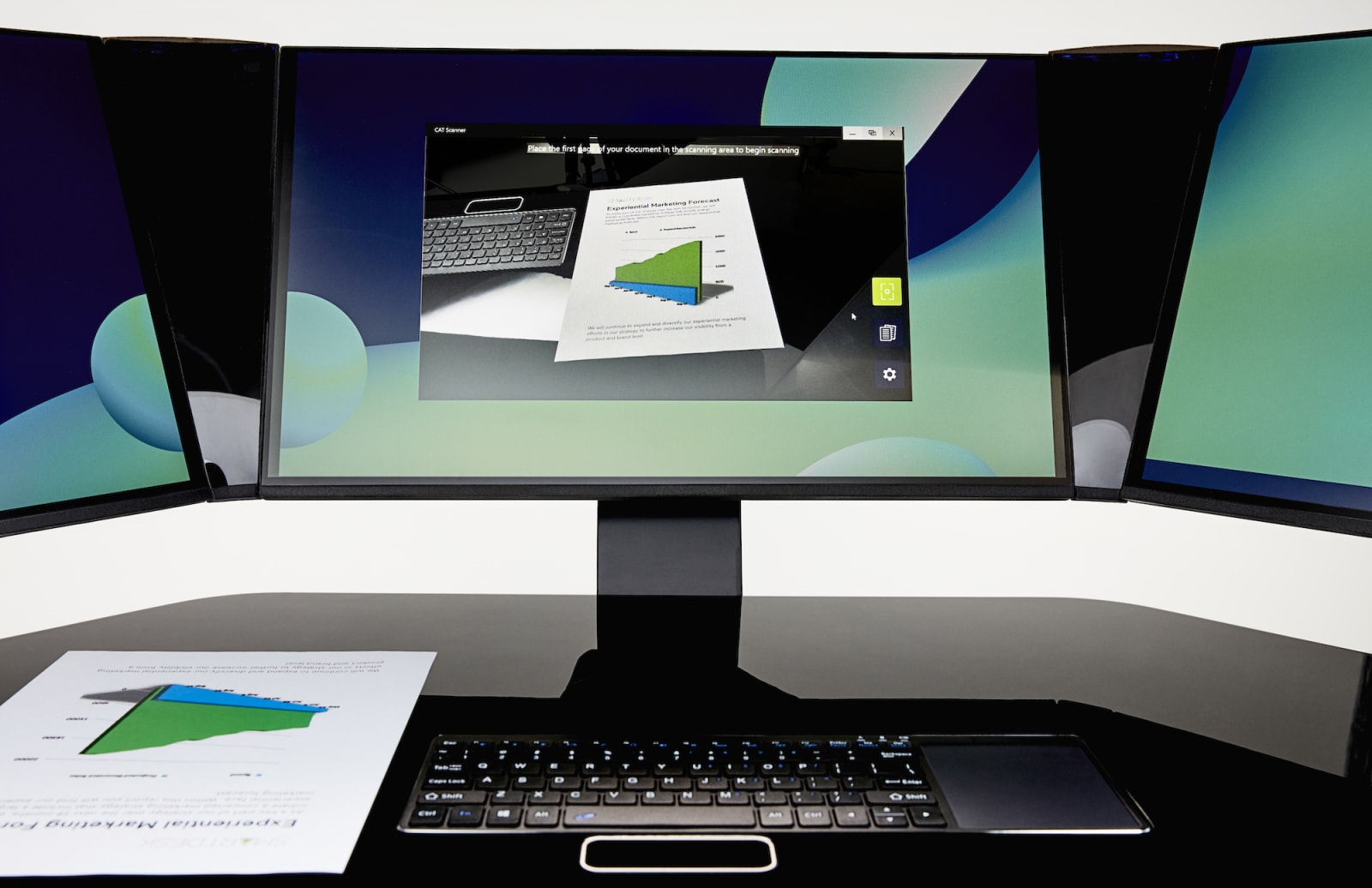 "While the technology in our homes, in our pockets and on the roads has evolved tremendously in the last decade, it occurred to me that technology where we work has barely changed at all," Saagar Govil, CEO of Cemtrex, told Engadget. "My desk itself had not evolved in decades; you still see tangled wires, clutter, a variety of devices loosely patched together. I realized that it was time to bring the technology that has changed our lives elsewhere into the workplace."

Perhaps the most important question is what if something breaks? Can you swap out the parts? For example, the keyboard isn't water-resistant. So if I spilled coffee on it, would I need to send the whole desk back for repairs? Unfortunately, I wasn't given detailed answers here. Govil simply told me that Cemtrex has a "nationwide team of technicians available to service SmartDesk should anything go wrong" and that technicians would be available to serve even after the one-year warranty expires. Yet, the customer is responsible for the cost of repairs outside of the warranty, and the cost "may vary." And if the computer gets obsolete over time, your only solution appears to be, well, to replace the whole thing. Cemtrex will provide a trade-in system similar to the iPhone where customers can upgrade their desk. 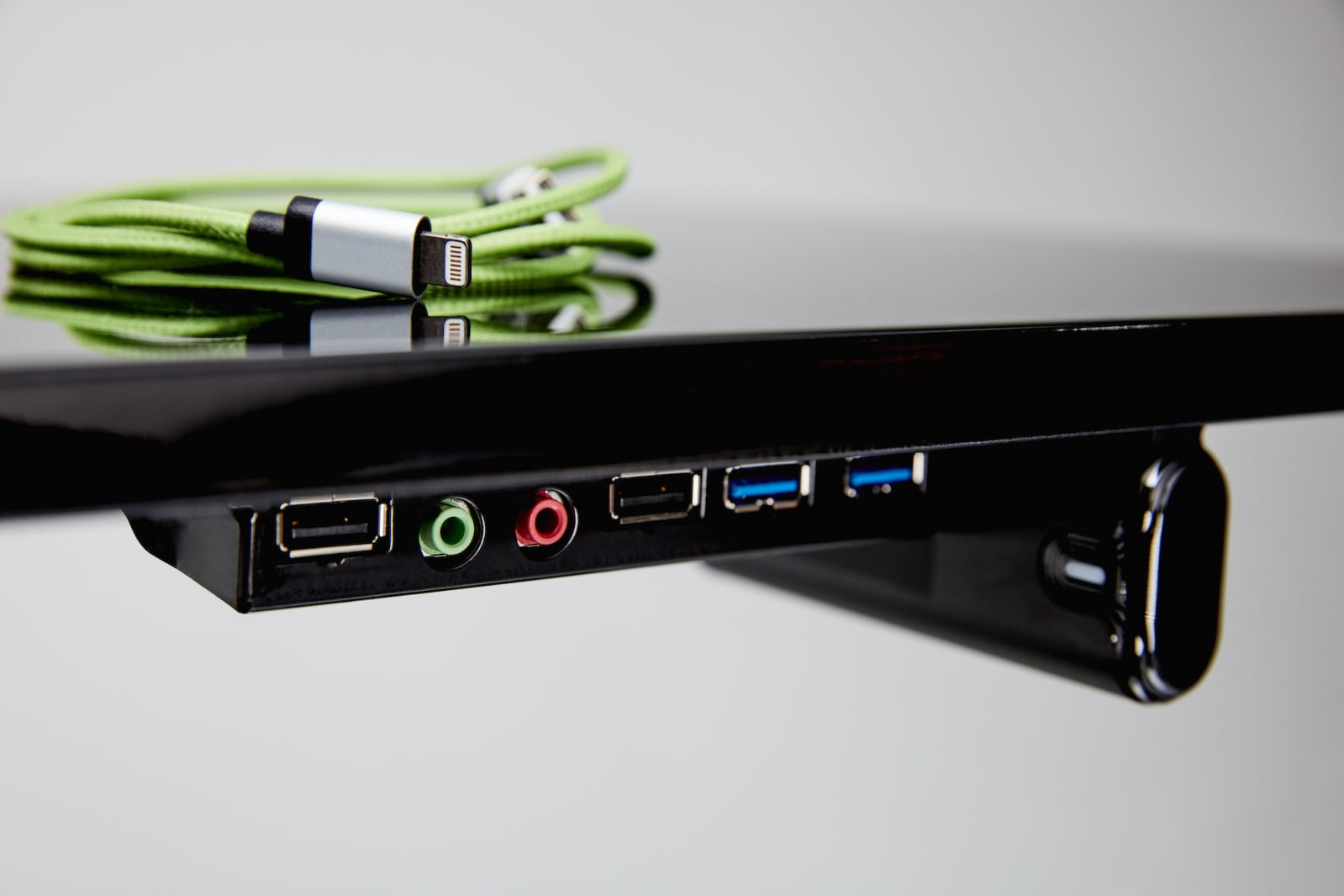 It's this last point that might give potential buyers some pause. All of these different functions bundled into one desk does seem pretty cool, and I appreciate touches like the integrated wireless charger and the document scanner. But if you can't swap modules in and out as you wish, then it loses all appeal for me. I would prefer spending the same amount of money by simply buying all the components separately.

I'm not the target audience for the SmartDesk though. Cemtrex will sell it to anyone -- both consumers and businesses -- but it does have more appeal to enterprise users. Right now the company says it's already talking with call centers, executive offices and open offices in a variety of different industries. Still interested? Then pre-orders are available right now, and it will start shipping in late December.

In this article: cemtrex, gear, hands-on, personal computing, personalcomputing, smartdesk
All products recommended by Engadget are selected by our editorial team, independent of our parent company. Some of our stories include affiliate links. If you buy something through one of these links, we may earn an affiliate commission.