ASUS' new StudioBook S is a portable workstation for creators

Move over Dell and Lenovo, ASUS' first workstation has plenty going for it

ASUS' new ZenBooks are pretty solidly spec'd, but sometimes you need some serious power to get your work done. That's where the company's new StudioBook S comes from: sleekness and portability were priorities, but the company was arguably more concerned with squeezing as much power as it could into a notebook. Not a huge surprise from a company that takes gaming as seriously as ASUS does -- this time, though, the Taiwanese PC maker is setting its sights on creatives.

ASUS considers machines like Dell's Precision line and Lenovo's ThinkPads to the StudioBook's closest competitors, but those are notebooks generally built with business in mind. That's not to say the StudioBook wasn't, but when ASUS uses the word "workstation," it's using a slightly different definition of the word "work." The company is pitching the StudioBook mostly as a machine for movie editing, crafting 3D models or building VR worlds. Those use cases are demanding, to say the least, so ASUS decided to go a little overboard with the hardware.

You can get a StudioBook with either a 2.2GHz, hexa-core i7-8750H or a 2.7GHz hexa-core Xeon E-2716M that can Turbo Boost up to 4.4GHz when needed, plus up to 64GB of DDR4 RAM and 4TB of NVME storage. Throw in a robust set of ports (including a Thunderbolt 3 USB-C, three full-size USB 3.1 ports, plus HDMI out) and an reader that can pull files off SD cards at speeds as high as 350 megabytes a second, and you've got yourself a machine that's very well suited to intense media manipulation.

We need to talk about this screen, too. Rival workstations can pack similar spec sheets, but the StudioBook's 17-inch, 16:10 display is a beauty. It's fully matte and covers 97 percent of the DCI-P3 gamut so colors basically look bang-on. (The fact that it's also Pantone certified certainly doesn't hurt.) At 5.3mm per side, the bezels here are pretty minimal too, though ASUS made sure to save its tiniest bezels for its new, apparently record-breaking ZenBook S13. And beyond all that, the screen's dimensions mean we're working with a 17-inch laptop that feels more like a 15-inch machine — there's no need to stay bound to your desk, unless you routinely burn through that 57Wh battery. 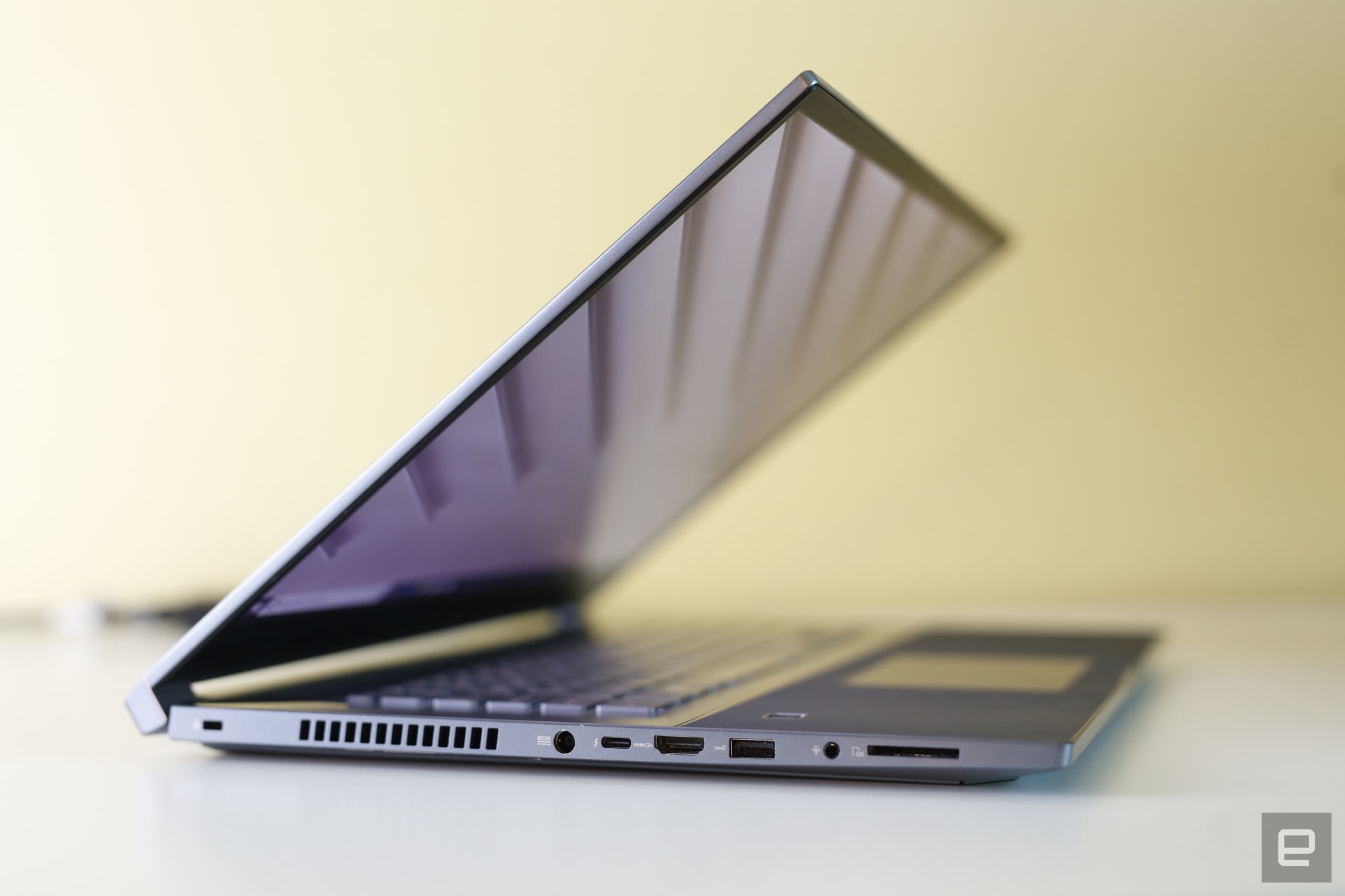 During our brief hands-on time, I found ASUS' keyboard to be an absolute treat. Keyboard fanatics will probably find the 1.4mm key travel more than comfortable enough for prolonged use, and thankfully, the spacious trackpad is no slouch either. (In typical ASUS fashion, you can also toggle a numpad directly onto that trackpad, because... well, just because.) Also useful were the handy microphone and webcam toggles, which should certainly come in handy when it's conference call time.

As I've said, we've seen ASUS kick ass and take names when it comes to gaming, so a shift to focus on YouTubers and 3D modelers might seem a little unorthodox. Then again, there's arguably no as such thing as too many powerhouse machines in the world, and ASUS' first portable workstation just might fit the bill for a market the company doesn't have all that much experience with. Of course, we won't know exactly how well the StudioBook stacks up against the Precisions and ThinkPads of the world until ASUS officially announces its price tag — for now, all we really know is that the machine is set to launch in Q2 of this year.