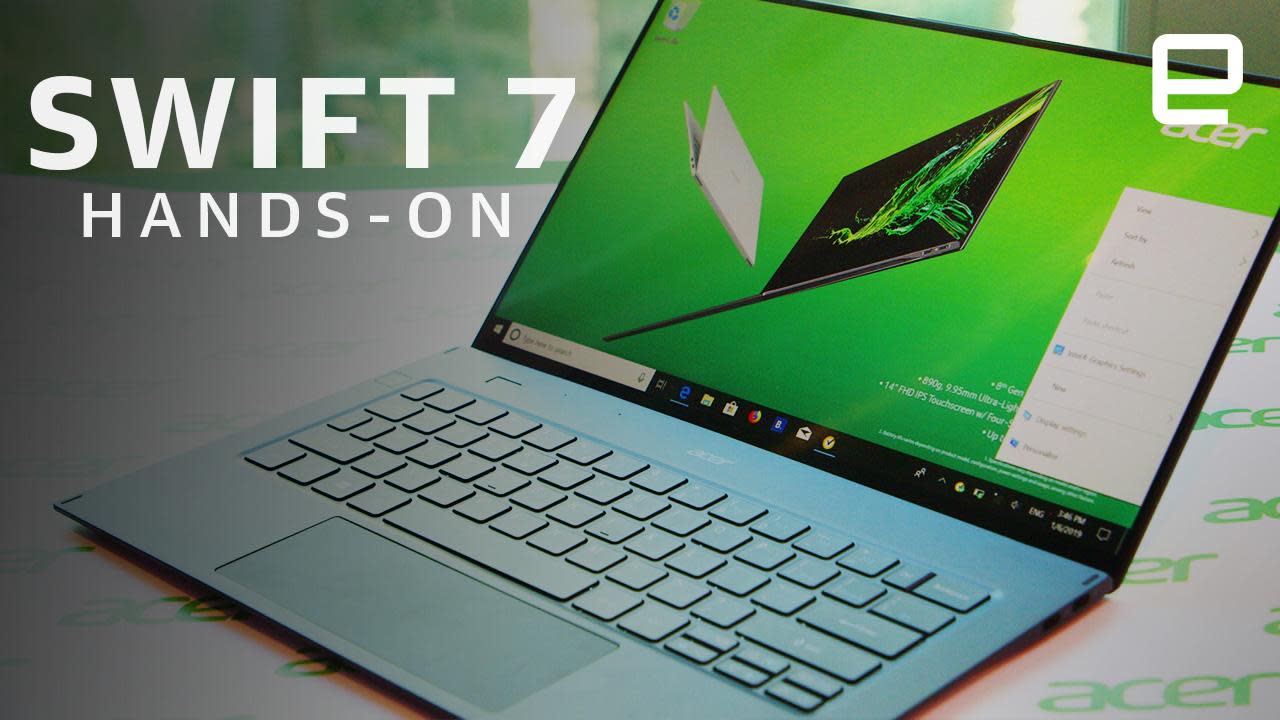 Acer announced its redesigned Swift 7 laptop yesterday, but it's the kind of computer you really need to see in person. Last year's model was impressively svelte, and Acer promised the new version would be even smaller. Well, after spending some time checking the new Swift 7 out, it looks like Acer managed to make a more compelling laptop than last years's model without introducing too many compromises. The most impressive thing about the Swift 7 are the minimal bezels around the 1080p, 14-inch screen. They're seriously small, and Acer kept them thin all the way around.. Last year's model had a chin at the bottom that was a bit of an eyesore; it's gone now.

The touchscreen panel might not have the highest resolution out there, but it looks quite bright and sharp, and the IPS technology means viewing angles were strong as well. Even though the new Swift 7 is smaller than every dimension than its predecessor, Acer managed to increase the screen size from the 13.3-inch panel found in last year's model.

As for how this computer actually feels? In a word, tiny. I thought the Chromebook Pixel and Apple's 12-inch MacBook were small computers, but the Swift 7 is smaller still. Of course, you pay quite a premium for this size — the laptop starts at $1,699. But for road warriors where every pound matters, it'll be worth it to have a laptop with a large, high quality display in such a small package.

Of course, there are some compromises. While the Swift 7 feels solid and well-made, Acer didn't do a very good job making it easy to open — a pretty important part of a laptop. And, of course, the webcam is set into the keyboard, which means you'll get plenty of unflattering, up-the-nose shots if you're not careful. The upside is that it hides the camera when you're not using it, but if you video chat a lot the Swift 7 might not be your best option.

There's still a lot we need to test before we can say if the Swift 7 is worth the rather high asking price. Chief among those is whether the lower-power, Y-series Intel Core i7 processor is strong enough and if the battery life is good enough for road warriors to choose this laptop over cheaper alternatives. The good news is that the display looks great, the keyboard is comfortable and it's the kind of computer you can take anywhere and barely realize you're carrying it. For some people, that'll be enough to sell them on the Swift 7.

In this article: acer, ces2019, gear, hands-on, personal computing, personalcomputing, swift7
All products recommended by Engadget are selected by our editorial team, independent of our parent company. Some of our stories include affiliate links. If you buy something through one of these links, we may earn an affiliate commission.