Keeping your ears open to the environment is key when riding a bike or otherwise needing to stay aware of your surroundings, but music is life right? The AfterShokz Trekz Titanium and Air series have been filling that need quite well for a while, but the company has broken away into new avenues for this year's models, with all the requisite z's still in place. Today the company has announced the AfterShokz Xtrainerz MP3 headset, along with its sister company OptiShokz's Revvez bone conduction audio sunglasses. The Xtrainerz should hit the market in Q2 2019 with a price of $149.95. Revvez are heading to Indiegogo on February 19th, 2019 for the crowdfunding treatment with an early bird price of $99 (MSRP $179). I managed to get my hands on some pre-production versions of both here at CES and overall, they seem worth a look, slotting nicely into some new categories.

When I first heard that the Xtrainerz headphones had ditched Bluetooth entirely, I was a bit taken aback. After some thought, however, it's less of a downer than I'd suspected. They're focused on being an active sport wearable, so being phone-free is a plus. The fact that they're IP68 certified is impressive, earning the highest marks for submersion in salt water and blocking dirt or detritus from clogging the internals. They even come with earplugs for swimming, so AfterShokz has gone full-in for the watersports crowd. 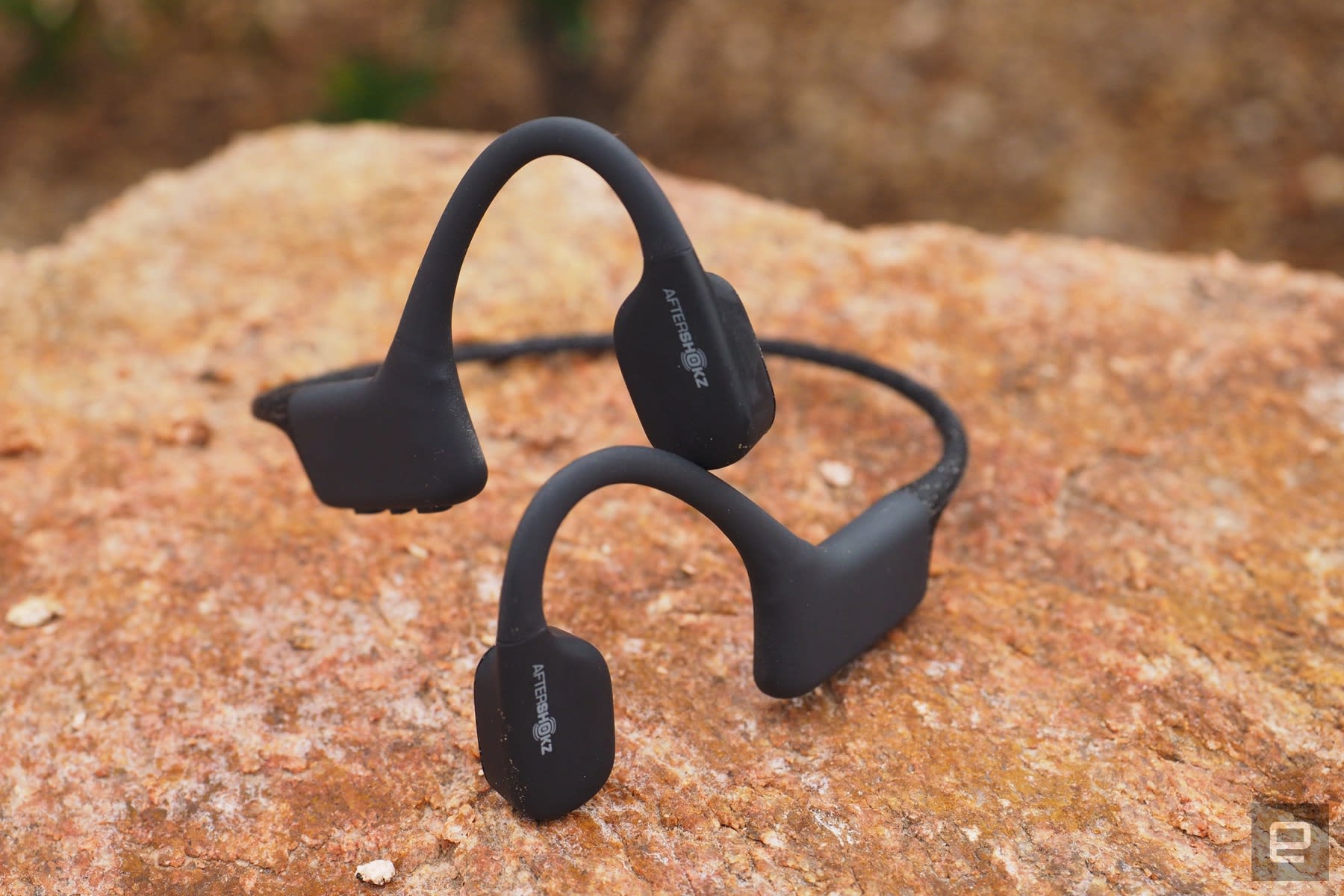 The fit on the Xtrainerz is improved and in general, smaller than that of the Trekz Air. The rear titanium headband is smaller and dips down less than the Air, which itself was an improvement in this area over the Titanium. The transducer heads still rest on your cheek in front of your ears, but these are about 50 percent smaller than the Air. At first listen, these seem to sound slightly better than the Air with a little more volume and bass. If you're looking for lightweight, Bluetooth-free bone conduction headphones, I'd direct you to these over the Air model. Although you'll miss out on alternative uses like using them for in-car turn-by-turn directions and phone calls.

If you're familiar with any of AfterShokz headphones, you'll find all the familiar key functions, along with a few new ones to help you navigate the 4GB of internal storage. The headphones should support MP3, WAV, WMA, FLAC and APE and are managed the same way as a USB thumb drive. Simply clamp the proprietary charging case on the arm of the Xtrainerz and connect to your computer via a standard microUSB cable. From there it's just drag-n-drop.

To manage the files, there are four buttons on the right arm of the headset. Three are on the underside: volume up/down with a multifunction button between them. You can easily adjust volume, pause and play, but you can press two for combo functions like skipping to the next folder. Button spacing is tight, so pressing two with a single finger is easier than you'd think. The fourth is a mode button at the rear end of the wide sidebar section. This one may take a bit of effort to press single-handedly but it's used for toggling less frequent functions like "repeat one" and shuffle. As of this writing, I haven't yet found a way to repeat a folder instead of just a track, something I hope they support as it seems like a no-brainer. The button also toggles new EQ modes, including above-water mode, underwater mode and earplug mode. 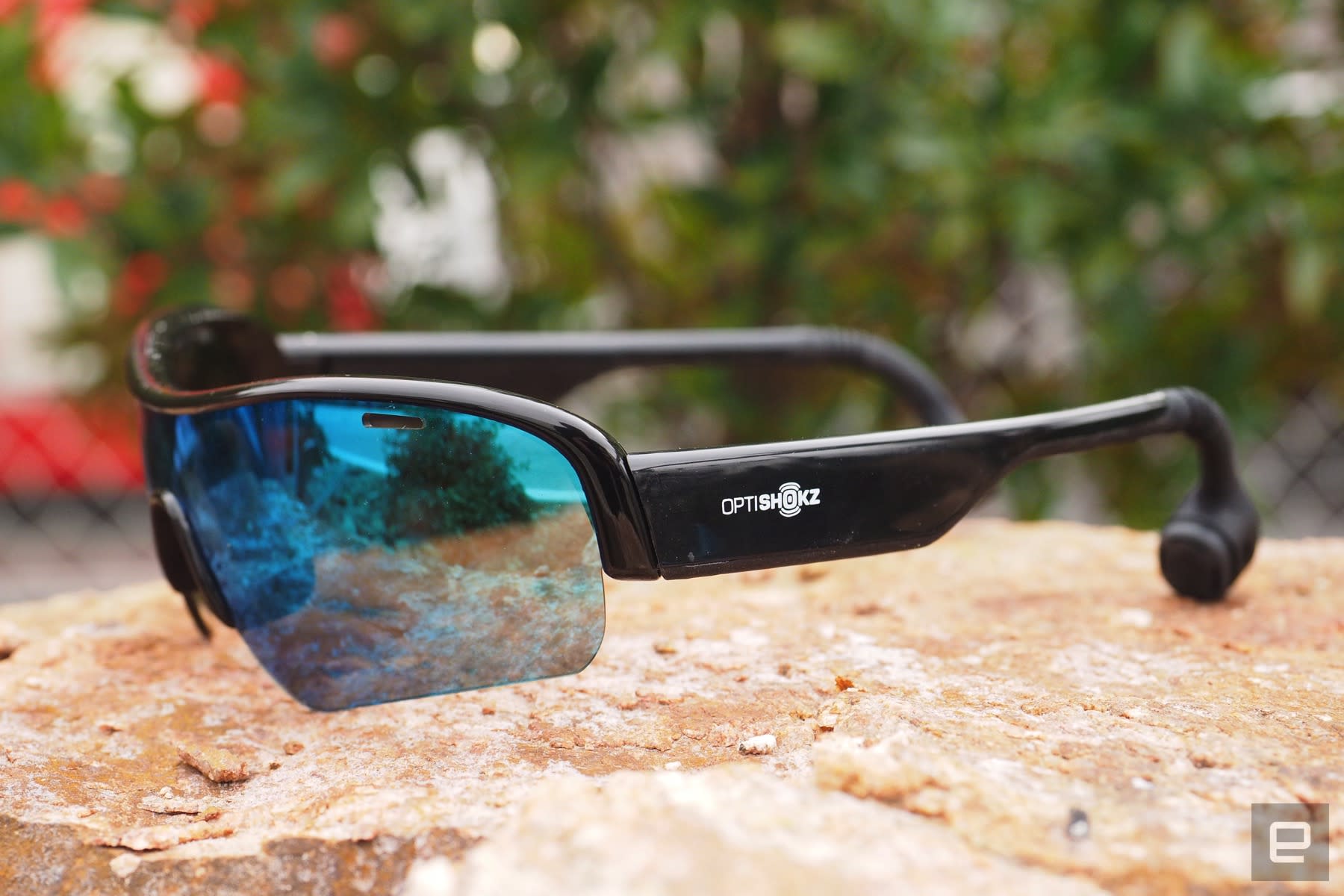 Due to some branding issues in the eyewear market, AfterShokz has spun off a new company called OptiShokz for its new Revvez bone conduction audio sunglasses. The audio portions of these glasses are a touch weird at first glance, since they extend off the end of the arm to wrap around behind your ear like an elephant trunk. The company says this is a first for bone conduction headphones, delivering audio through its transducers to the cartilage behind the ear which transmits directly to the inner ear (as is the nature of bone conduction tech).

Since these are glasses as well as headphones, looks may be rather important. Overall, these aren't too bad, ranging from a Terminator cyberpunk style through to neon-garbed bike enthusiast depending on perception and outerwear I suppose. Since the transducers are at the ends of the arms and wrap around behind your ear, the body of the glasses aren't oversized, measuring up with other sunglasses normally found on the market. They're relatively light, as well, compared to some other audio eyewear. 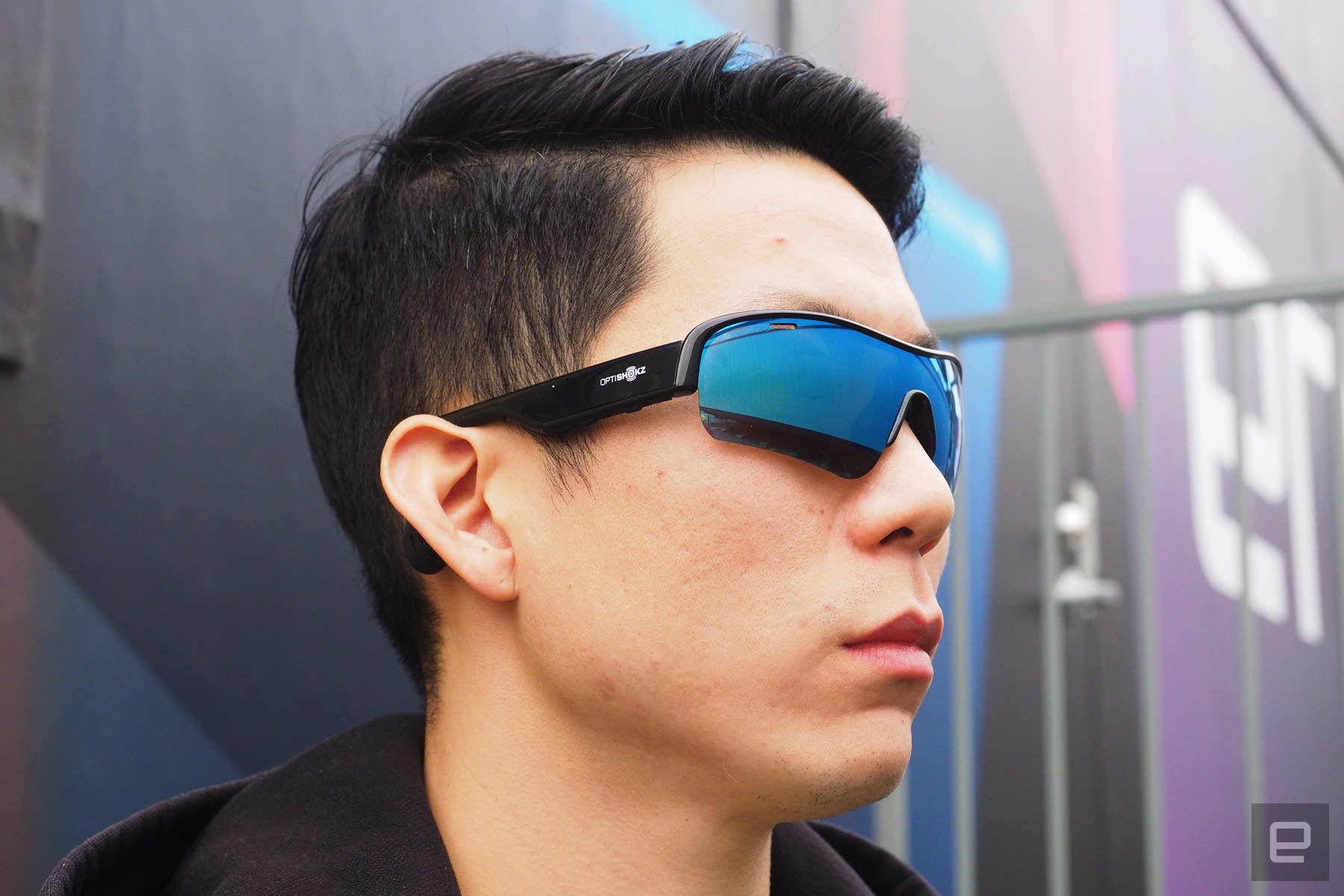 The frame a TR-90 nylon frame, which is billed as a lightweight and flexible material. They're definitely lightweight. Audio controls are on the right arm's underside and match those of AfterShokz Trekz headphones, so the experience is familiar to existing customers. I found the button feel to be a bit mushy though, with a soft rubber material similar to the wraparound transducers. It may be part of the build that gives it an IP55 rating which makes it fairly resilient to sweaty workouts.

FWIW, I've felt comfortable walking around in them, especially since you get a lens that runs from left to right over the nose in one piece, making them pretty sci-fi. There's one color option per box, but you can purchase additional Teijin polycarbonate lenses such as Polarized Grey (the only polarized lens in the group), REVO Blue, Gradient Grey, Transparent, and Bright Yellow. It's been overcast since I've gotten these, so I can't say if they're ideal protection for driving with the sun in your eyes.

Like the Xtrainerz, the OptiShokz Revvez I tried are also very much pre-production models, so my audio observations should be taken with a grain of salt. That said, there seems to be a bit less volume in the Revvez than the later Trekz models. The frequency range seems decent though, with a nice low end for bone conduction headphones. One caveat is that they may tend to jiggle your ears with basslines here and there, providing a weird tactile experience.

If you're not looking to blast tunes loudly, then I'd offer these are quite nice. If you're biking with a helmet, they're likely less obtrusive than classic AfterShokz headphones and if you're doing casual activities, the volume is certainly adequate. On the short term, they're comfortable enough to wear and the wraparound piece didn't offend. It's sheathed in a soft flexible rubber which feels fine on the skin.

These are straight up Bluetooth for audio, unlike the new Xtrainerz from AfterShokz and could be ideal for driving, along with turn-by-turn and phone calls. Wearing sunglasses with bone conduction headphones has always been awkward and slightly unpleasant with how the glasses arms would overlap with the over-ear transducers, so the OptiShokz solve that problem in one go. If you're interested in this type of product, I'd hop on that $99 early bird deal.

All products recommended by Engadget are selected by our editorial team, independent of our parent company. Some of our stories include affiliate links. If you buy something through one of these links, we may earn an affiliate commission. All prices are correct at the time of publishing.
View All Comments
OptiShokz built bone conduction audio sunglasses