A well-rounded ultraportable at a competitive price.
C. Low|01.07.19
@cherlynnlow

Huawei's MateBook X is one of my favorite laptops ever. It's dainty enough to fit in most of my purses yet powerful enough to muscle through demanding trade shows. But the MateBook X is more than a year old by now, and with a starting price of $1,099, it might be too expensive for a lot of people.

The company makes cheaper laptops like the MateBook D and E series, but those are larger 14- and 15-inch machines. Those looking for a more affordable 13-inch MateBook with the latest guts might want to consider the new MateBook 13. It sits between the X and D lines in the company's portfolio, and it is supposed to be a "no compromise" offering that promises performance on par with the MateBook X Pro while keeping a small footprint and slightly lower price -- starting at $999.

Though it's cheaper than the MateBook X, the 13 doesn't feel cheap. Its aluminum unibody design with chamfered edges lends it a premium quality. It's six percent smaller than the latest MacBook Air, according to Huawei, and measures 14.9mm thin, which beats the MacBook Air's 15.9mm.

But the MateBook 13 still felt chunkier than its Apple inspiration, most likely because the comparison was made against the MacBook's thickest height, not its super thin, tapered edge. The sloping design gives Apple's notebook a sharp, modern feel that the MateBook 13 lacks. 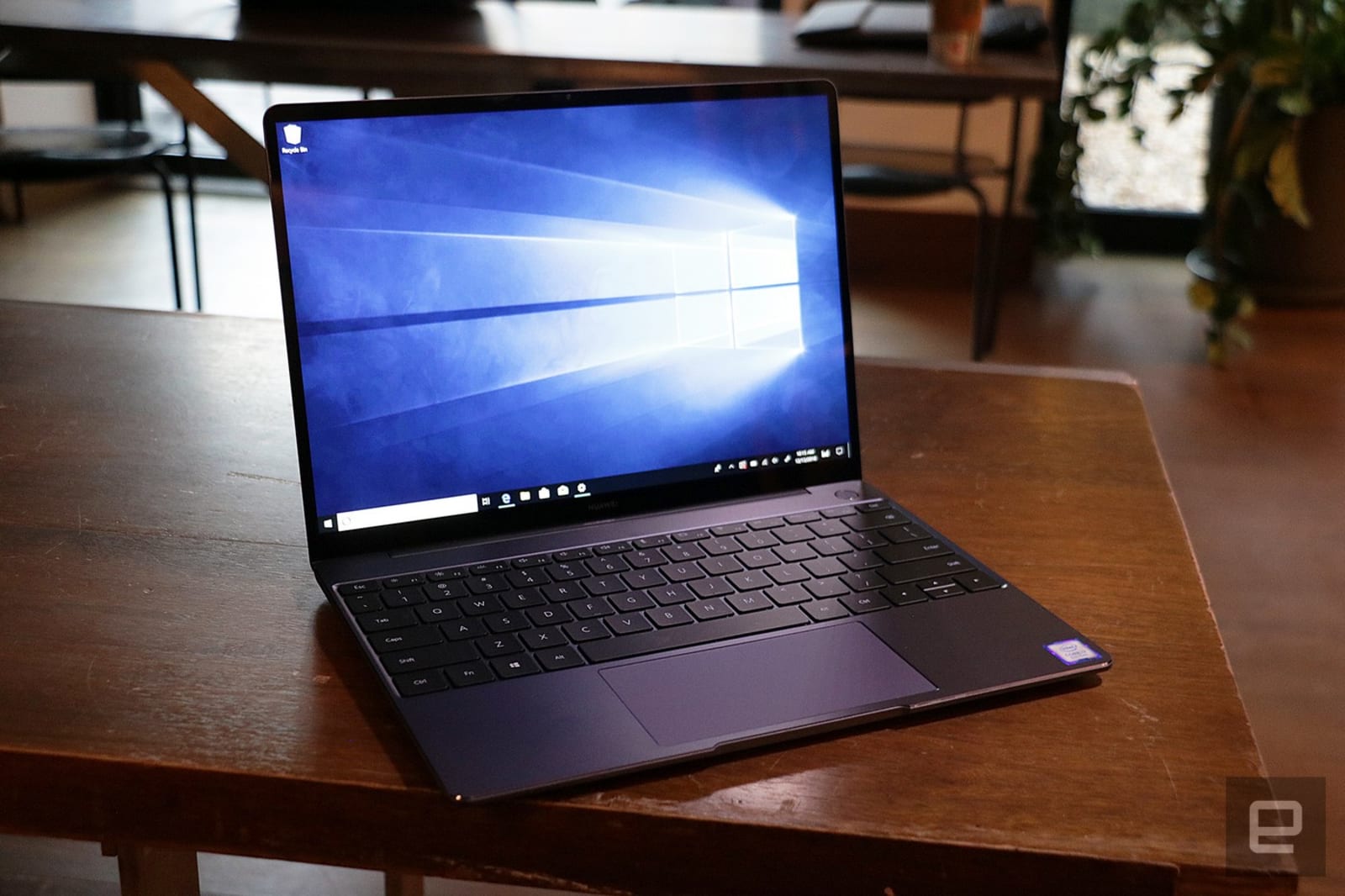 Huawei's comparisons against Apple don't stop there. The MateBook 13's display bezel is just 4.4mm thin, giving it an 88 percent screen-to-body ratio that the company says rivals the MacBook Air's 82 percent. While the Huawei laptop's screen certainly looks nice, we're probably getting a bit too nitty-gritty if we're debating a six percent difference in screen-to-body ratio. Just know that the two laptops are very similar, and the MateBook has some differences in its physical dimensions that make it slightly smaller.

I like the MateBook 13's 3:2 touchscreen, which was plenty sharp thanks to its 2,160 x 1,440 resolution. I checked out some websites and gorgeous trailers on the laptop, and its display provided rich colors and ample viewing angles. Thanks to the dual speakers on the keyboard deck as well as Dolby Atmos support, music coming through the MateBook 13 sounded crisp and loud.

I wish the screen were a bit brighter, though -- it's a little dim, at just 300 nits. But if you're not using this under bright light a lot, you'll be able to read your work just fine.

Those who hate the basically flat keyboard on the MacBook Air will appreciate that the MateBook 13 offers 1.2mm of travel. Huawei also expanded the trackpad, which I love because it means I can pinch zoom even more before running out of space. There's also a fingerprint sensor integrated into the power button, and you won't have to first press the button to wake the computer up. Just lay your finger on the scanner to turn it on and log in. Plus, Huawei added an independent security chipset to store your biometric information for authentication. 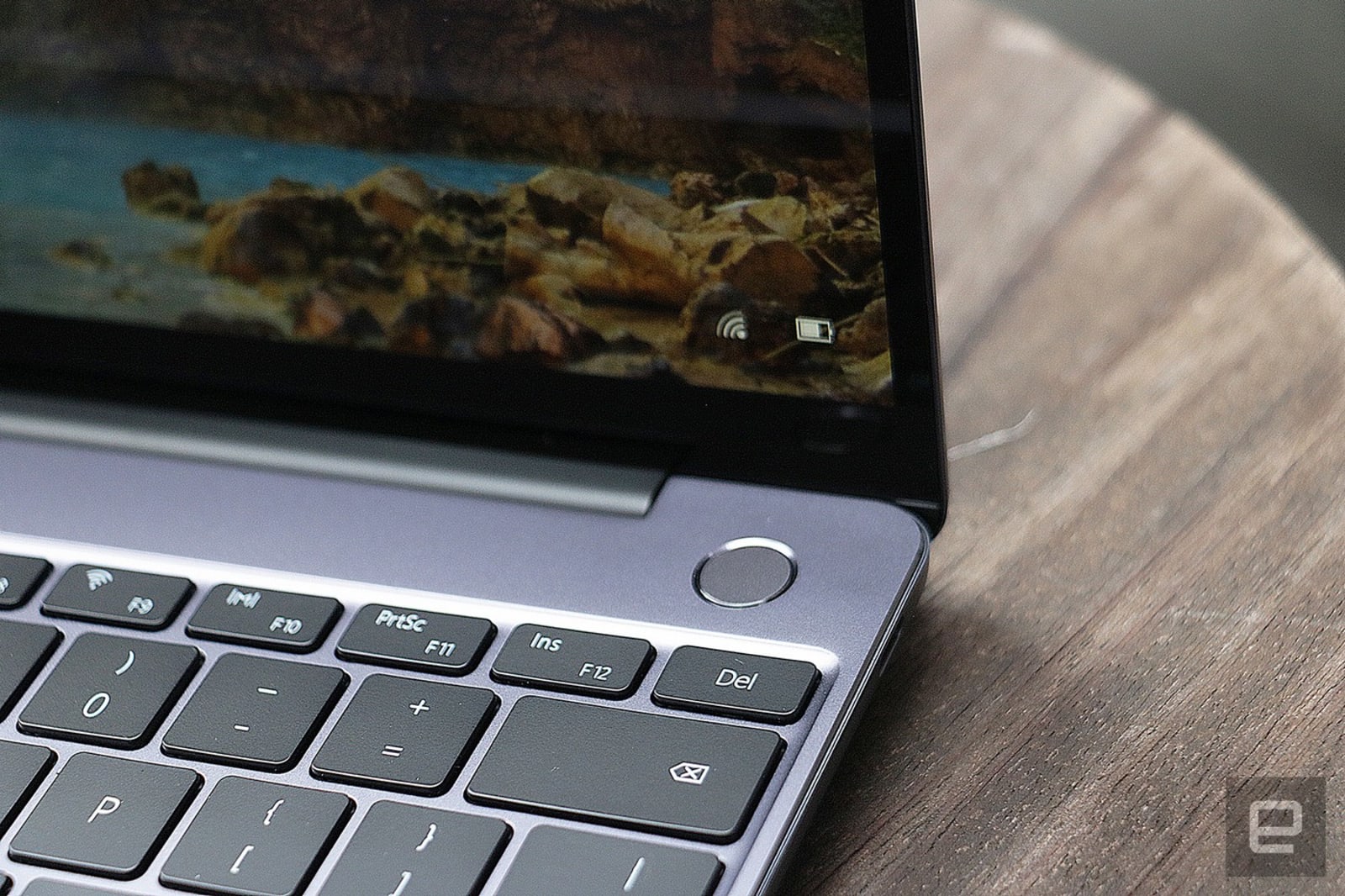 The MateBook 13 should also be a capable workhorse thanks to its powerful guts. It comes in two configurations in the US. The higher-end option packs an eighth-generation Intel Core i7-8565U chipset and an NVIDIA GeForce MX150 graphics card while the other has a Core i5 instead of i7, with Intel's UHD620 graphics instead of NVIDIA's. Both systems offer 8GB of RAM, which is pretty standard for the price.

Huawei says it was able to squeeze more-powerful cards in the MateBook 13 because of its Shark Fin 2.0 thermal setup that can support up to 8,000 rpm without overheating. The company placed a dual fan system in between the CPU and GPU to separate the heat, and it said it can achieve 25 percent higher volume than a traditional fan. It also uses an "intelligent filtering solution" to manage performance and reduce fan noise.

The Shark Fin 2.0 setup also allowed Huawei to dedicate about 50 percent of the laptop's space under the hood to its 42Whr battery. According to the company, the Core i5 MateBook 13 can last up to 10 hours when playing 1080p video, which is pretty good if it holds up in the real world. 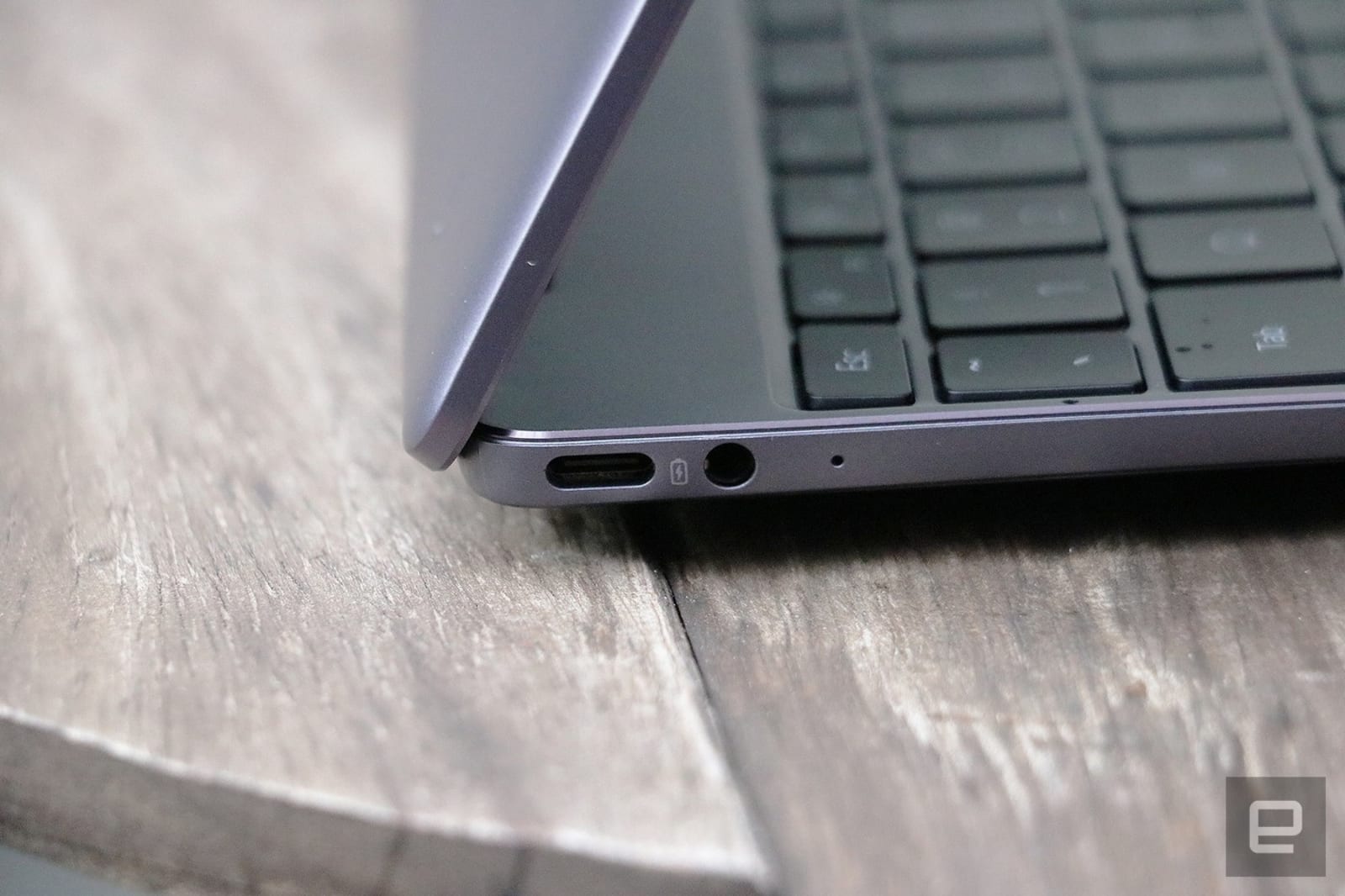 Like the other MateBooks, the 13 comes with a headphone jack and two USB-C ports. But Huawei is kind enough to include a dock with USB-A, USB-C, VGA and HDMI. Unlike the MateBook X Pro, the MateBook 13 houses its one-megapixel webcam in its bezel above the screen instead of under a pop-up button on the keyboard. Thank God.

Huawei also offers a 65W USB-C power adapter that you can use to fast charge your compatible phones. The MateBook 13 is supposed to get up to 2.5 hours of "office work" (presumably spreadsheets, emails and web browsing) in just 15 minutes of charging.

The MateBook 13 seems like a promising, well-rounded laptop. The base version comes in silver and will cost $999 when it's available later this month while the Core i7 version starts at $1,299.