It's all thanks to a bundled smart speaker dock.

At last year's Alexa event, Amazon teased that Lenovo would be making a tablet with Echo Show capabilities. Now at CES, we finally know more details about it. It's called the Lenovo Smart Tab, and it works as a 2-in-1 device -- a full Android tablet on its own, but it transforms into an Alexa Smart Display when placed inside a smart speaker dock.

If you're thinking this sounds a little familiar, it's because Amazon already introduced this same functionality in its own Fire tablets last year. The difference there, however, is that you need to buy Amazon's speaker tablet dock separately in order to really replicate the Echo Show look and feel. With the Lenovo Smart Tab, on the other hand, the speaker comes bundled right along with the tablet at no additional cost. While Lenovo is marketing it as a 2-in-1 device, the company is still claiming that the Smart Tab is tablet-first, with the Echo Show capabilities as a nice bonus.

There are two versions of the Lenovo Smart Tab: the M10 and the P10. The M10 is the more entry-level of the two, while the P10 is the higher-end sibling. The M10 has a soft-touch finish back, has up to 32GB storage, a 4,850 mAh battery, two front-facing Dolby Atmos speakers, a 2-megapixel camera on the front and a 5-megapixel camera on the back. The P10, on the other hand, has a more premium pedigree with a dual-glass design, up to 64GB storage, a 7,000 mAh battery, 4 front-facing Dolby Atmos speakers, and a 5-megapixel front-facing camera along with a 8-megapixel rear-facing one. There's no question the P10 is the sleeker of the two tablets.

Yet, their displays and internal processor are the same. Both are equipped with a Qualcomm Snapdragon 450 processor as well as a 10.1-inch Full HD (1,900 x 1,200) LCD IPS screen. That means that when either are placed in the speaker dock, they both look and feel effectively the same. From my brief demo with the M10 and P10, the edge-to-edge displays look gorgeous. 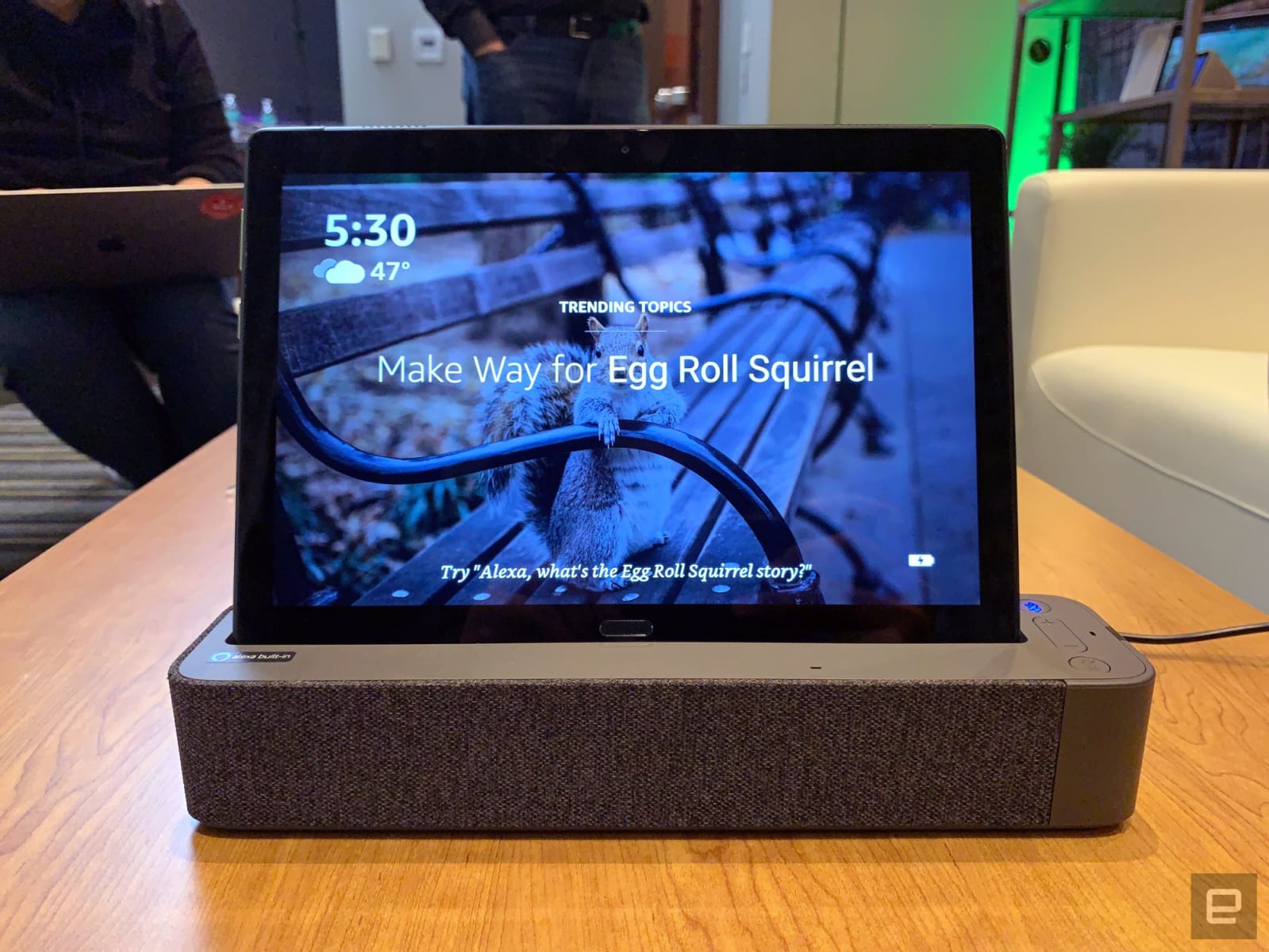 One particularly neat feature of the Smart Tab is that if you're watching a movie on Netflix, YouTube or Amazon Prime in tablet mode, and you dock it in, the movie will continue seamlessly without any hiccup or change in mode.

What's more, the smart speaker dock sounds great. Thanks to two three-watt full-range speakers, the audio is really loud and punchy, at least from the few minutes I had listening to it. It also comes with three far-field microphones that can theoretically pick up your voice even from across the room.

As far as the smart display interface goes, it really does look and feel identical to that of the Echo Show. You get the same home screen and the same Alexa functionality. There are a few differences, however. For one thing, the interface for settings is slightly different -- instead of drop-down panels that you'd find on the Echo Show, you'll get the usual Android settings instead.

Another potential issue is that the Lenovo Smart Tab won't have the full integration with Hulu Live TV and NBC that the Echo Show does, due to different commercial agreements. According to Lenovo, the two devices share the same "technical readiness" but just have different deals with the different providers. 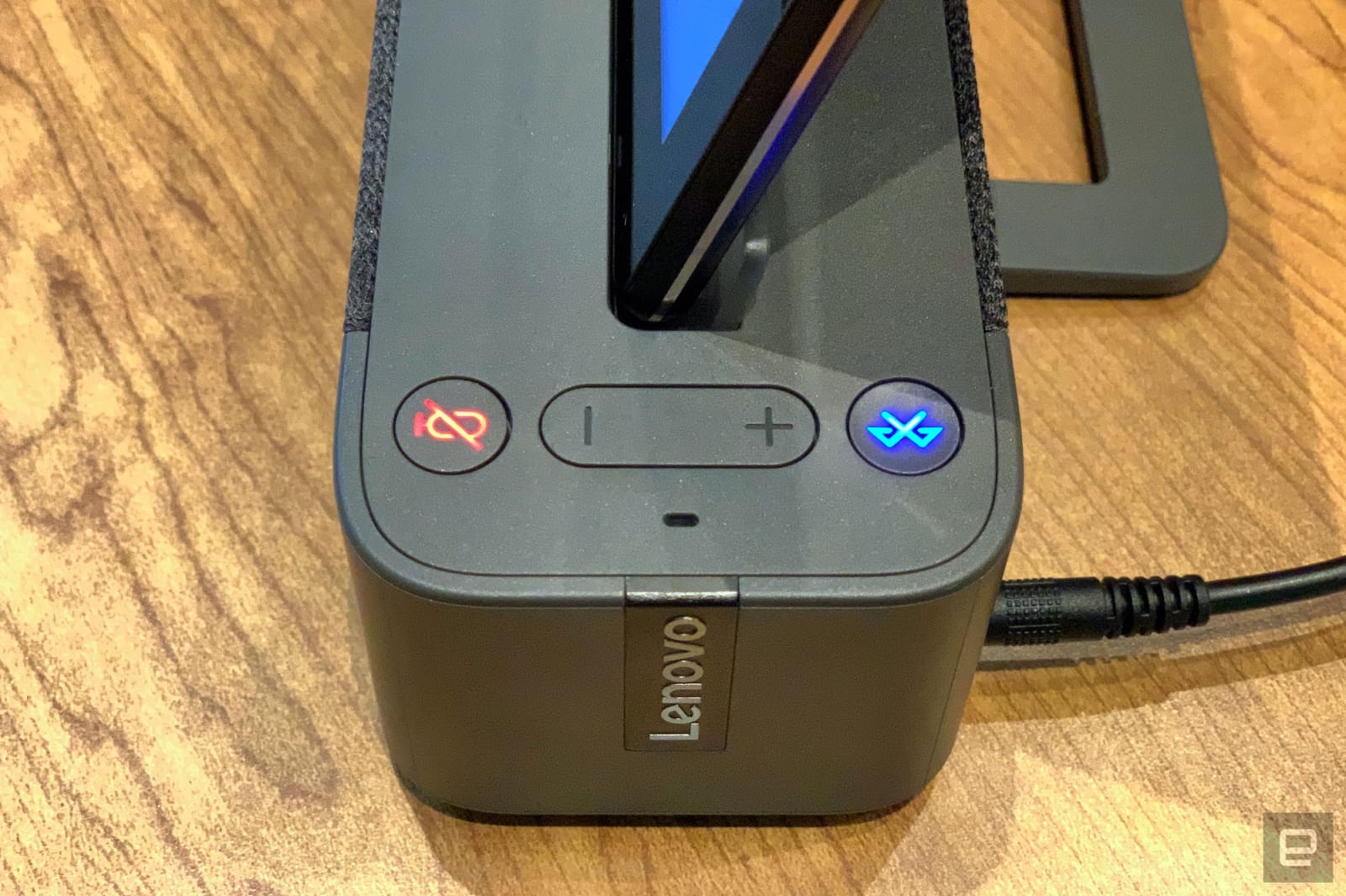 Lastly, according to Lenovo, the Smart Tab won't have the Alexa communications suite at launch, so you won't be able to make calls with it. That functionality could come soon after, however.

According to Lenovo, one of its inspirations behind the Lenovo Smart Tab is that most tablets sit around unused for the majority of the day. And when it sits around unused, it runs out of power, so it's dead when you finally pick up to use it. In a way, the Smart Tab is a way to make the tablet relevant again -- it still works fine as a tablet, but now when it's unused, it still has some level of function as a smart display while keeping it charged at the same time.

The M10 will retail for $199 while the P10 is $299, and, remember, both come with the speaker dock bundled alongside it, which makes both a pretty good deal. After all, an Echo Show is currently priced at $230, and that can't work as a tablet. Plus, if you see yourself only using the Smart Tab as a tablet only once in awhile, and as a smart display most of the time, then it seems to me that getting the cheaper M10 would probably make more sense.

If all of that sounds intriguing to you, fortunately both the Lenovo Smart Tab M10 and P10 will be available this very month, so you can go out and try them out for yourself soon.