The display quality is surprisingly good.

While the likes of Microsoft Hololens and Magic Leap One got their moment of fame, both their size and image quality left a lot to be desired, so there wasn't much excitement in the mixed reality market after them. But at CES, a Chinese startup dubbed Nreal brought out something rather interesting: Low-profile mixed reality glasses that look and feel almost like ordinary sunglasses, so you can use them out in the open without getting too much attention. Better yet, the display quality was surprisingly good.

These Nreal Light glasses are able to offer a sharp and vivid image thanks to 1080p laser projectors (up to 60 fps) for each eye, all the while offering a 52-degree field of view which easily beats the Magic Leap One. And of course, you can still see the outside world while enjoying your digital content. The frame has dual microphones along the top for clearer reception, along with stereo speakers towards the end of both foldable arms (or you can switch to Bluetooth headphones), plus brightness buttons on one of the arms.

Fitting is easy thanks to the adjustable magnetic nose support. Likewise, Nreal offers magnetic prescription lenses, which is a must since I can't keep my own glasses on while wearing the Light. On the other side, you'll find a pair of front-facing cameras plus other sensors, and these are for inside-out tracking based on Nreal's SLAM (Simultaneous Localization and Mapping) algorithms. More on that later. 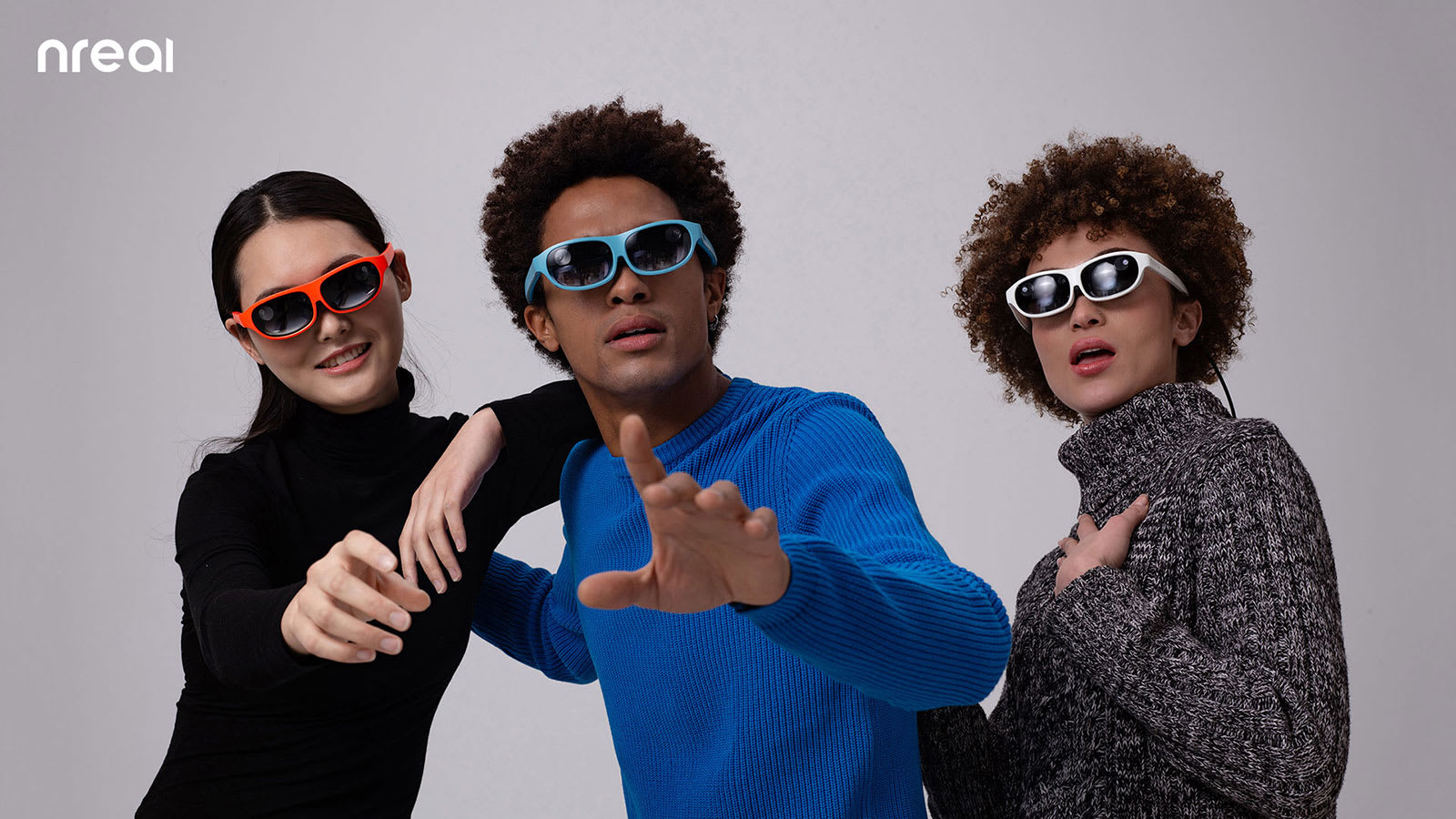 Considering how many components are tucked into the glasses alone, I'm still amazed that they only weigh 85 grams. This is admittedly a lot more than, say, an average pair of Oakleys, but is still a fraction of the Magic Leap One's 345-gram weight, and the Light felt comfortable throughout my 10-minute demo. Much like the Magic Leap One, the Nreal Light runs off a separate Android pocket device (powered by a Qualcomm Snapdragon 845) that you can wear on your neck or clip onto your pocket. This can run for around three hours on a single charge. In the future, you can even plug the Light into any smartphone or PC via USB-C.

The quick demo I had gave me a taste of the Light's various potential applications -- mainly light entertainment and productivity. I started off with the classic personal cinema, watching videos on a resizable screen while still able to see the outside world. I then moved to a large meeting room and got to try a first-person space shooter, watch a few anime dancers and then, finally, simulated a telepresence call from said meeting room. The tracking worked fine as I walked around the subjects, and at no point did I feel sick. That said, I did notice that the top part of the Light's frame got quite warm after a while, and I was told that this will be refined on the final version. 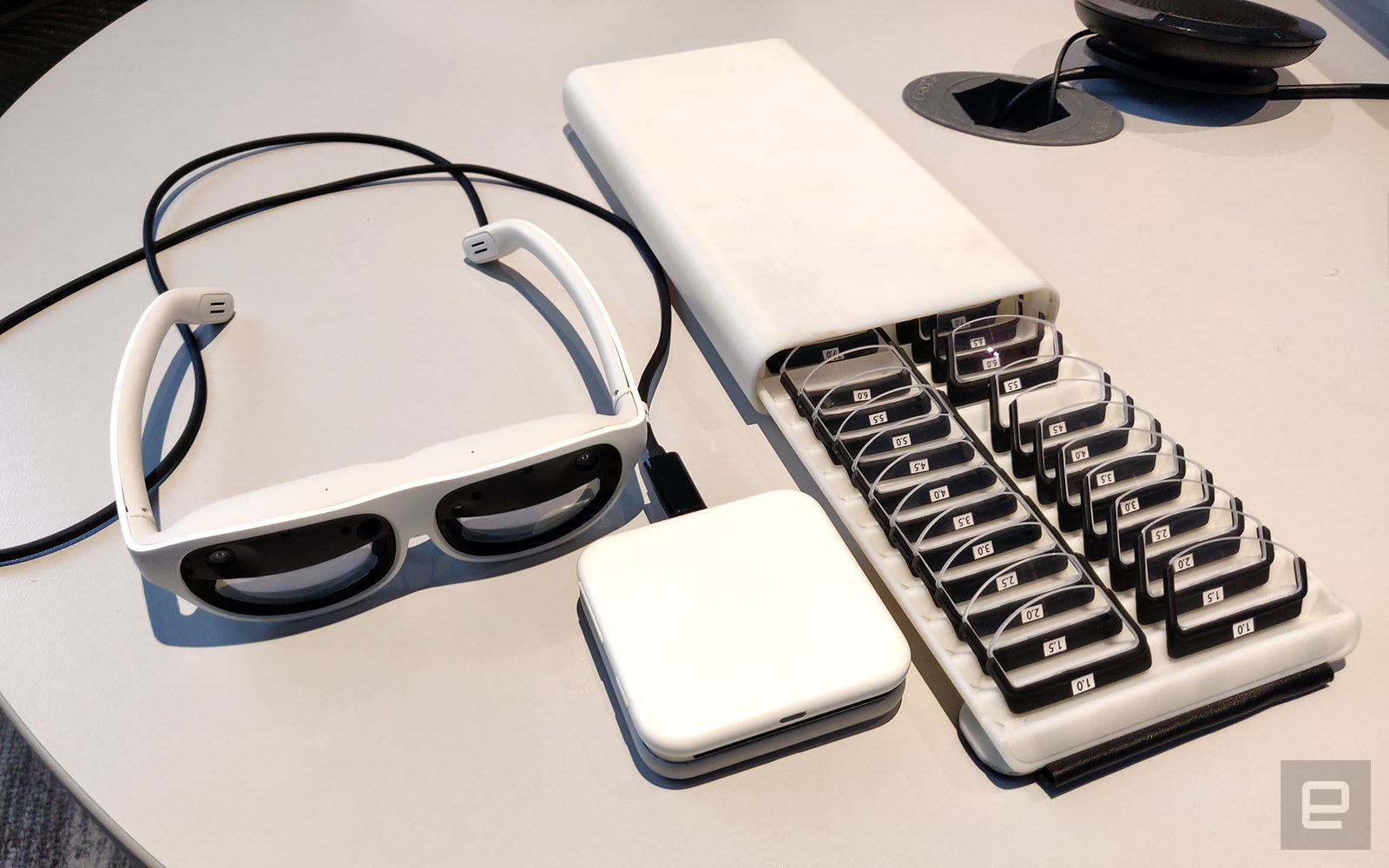 Even though I have more experience with VR than MR, after trying the Nreal Light, I can already appreciate how MR devices are more convenient for certain applications and scenarios. While I would probably stick to a VR headset for a more immersive cinema experience on a long flight, the Light would be a great alternative for my daily commute. And of course, there are times when MR makes more sense, especially for telepresence and certain games.

The Nreal Light is the work of some 70 people based in Beijing, with co-founder and CEO Chi Xu having previously worked at NVIDIA followed by Magic Leap, where he helped develop the inside-out tracking technology. The other co-founder, Bing Xiao, is the Lead Optical Engineer who briefly joined eye-tracking developer 7Invensun before Nreal. The team is aiming to launch the Light in the consumer market in either the second or third quarter this year, and interestingly, these glasses will cost "the same as a smartphone" -- a lot cheaper than the aforementioned competitors, even if it's referring to some of the more expensive phones out there. Until then, here's hoping that Nreal can put together some killer apps in time for launch.

All products recommended by Engadget are selected by our editorial team, independent of our parent company. Some of our stories include affiliate links. If you buy something through one of these links, we may earn an affiliate commission. All prices are correct at the time of publishing.
Nreal Light are mixed reality glasses in disguise
ces2019
gear
glasses
hands-on
light
mixedreality
mr
nreal
wearables