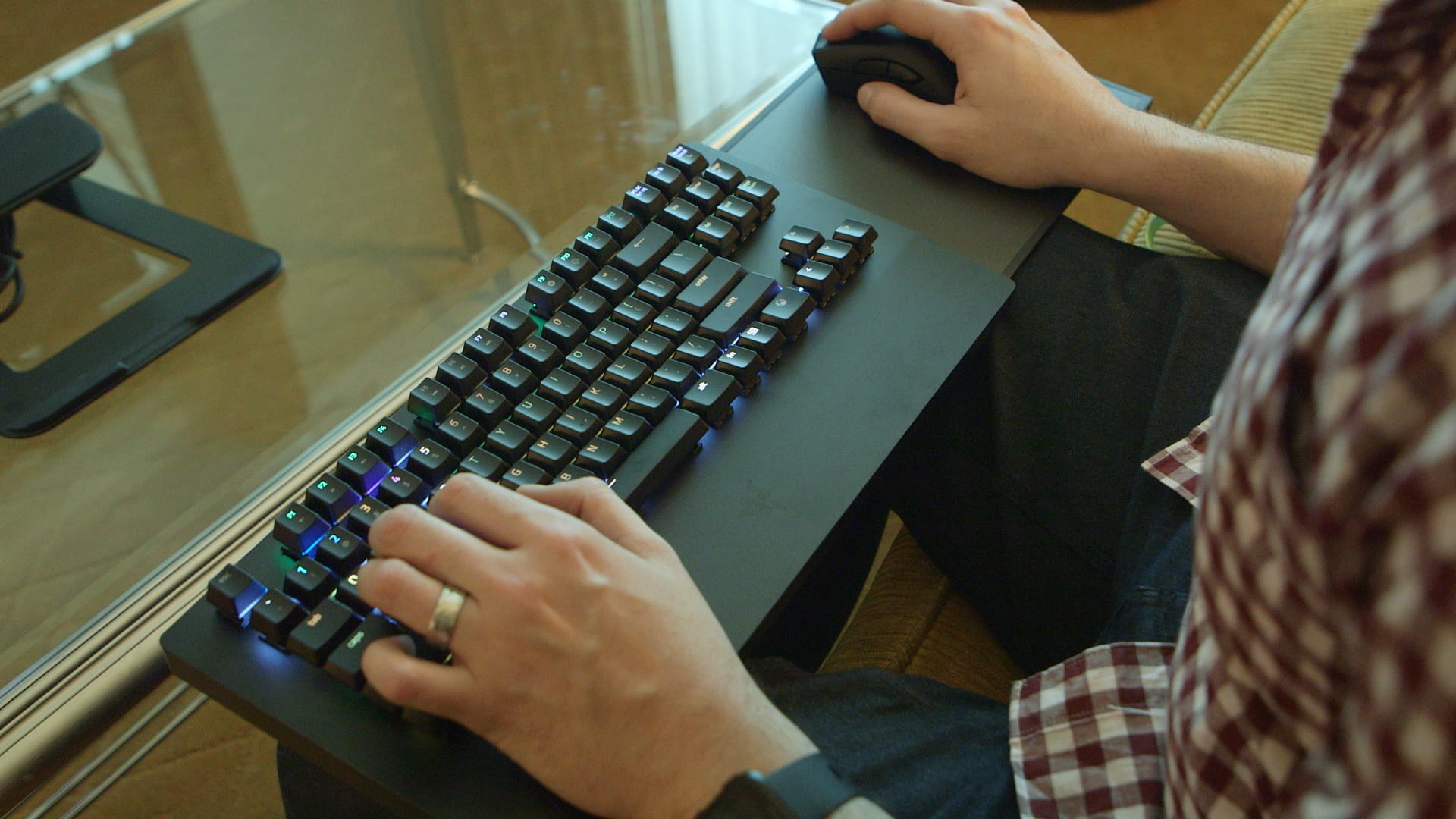 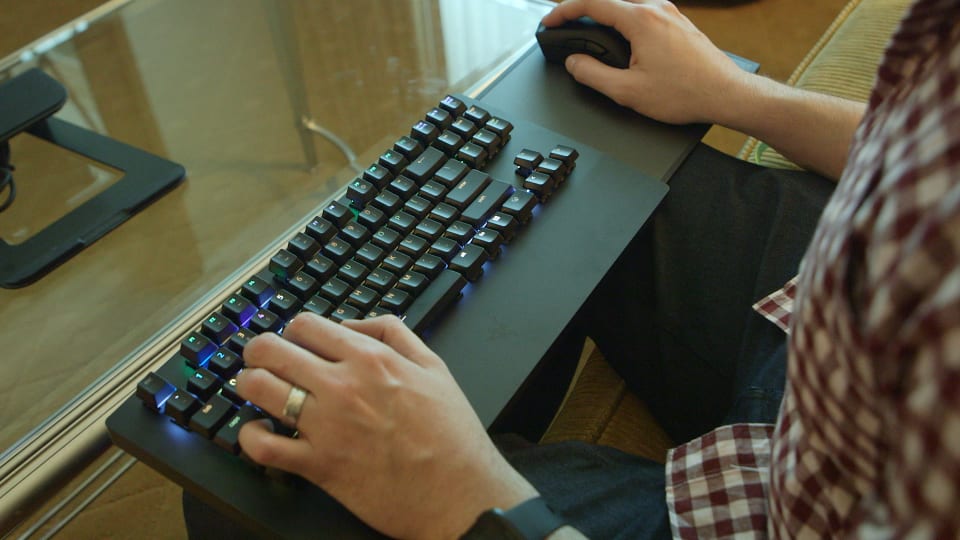 With mouse and keyboard support coming to Xbox One last November, the walls between PC and console are coming down. Nearly any modern wired or wireless mouse should work with the Xbox One, but while lots of living room gamers may be ready to jump into the fray with the added precision of a mouse, most keyboard/mouse setups are not made to be easily used from the couch.

Razer is hoping its new keyboard and mouse combo will help bridge that gap. The Turret for Xbox One pairs to a console with a single USB dongle, and, as the name would suggest, is designed to work with the Xbox One. (The slightly clunky name is to differentiate is from a previous "Turret" laptop.)

The keyboard itself is a minimalist slab of metal and comes with Razer's mechanical keys and full Chroma RGB lighting. While the previous turret had a fold-out mousepad, this model cleverly integrates a sliding tray on its right side for the mouse to rest on. 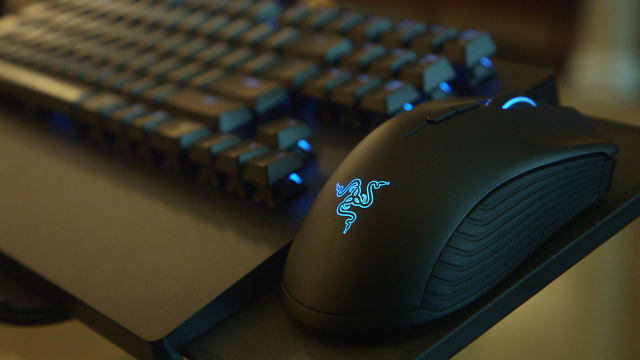 This retractable tray is one of the best parts of the Turret's design.

This setup is more comfortable than I'd expected, and the keyboard and mouse feel natural to use from a sofa, whether perched on the edge or leaning back. The previous "not for Xbox One" Turret had a lightly magnetized mousepad, and Razer has expanded on that idea. This Turret sports two different strength magnets in the mousepad/tray. The tray's outer edge sports a set of magnets strong enough to hold the mouse in place, even vertically. This is a great idea, and keeps the mouse from getting knocked around as you pick up the tray or set it back on a coffee table. 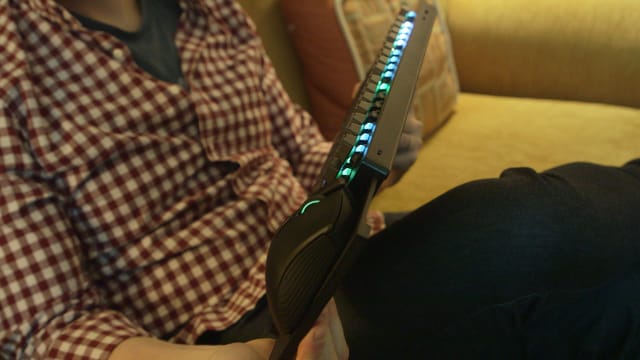 The magnets throughout the bottom of the tray are much weaker, and I'm not actually sure what purpose they really serve. They aren't strong enough to hold the mouse on the tray at a steep angle, and at a shallower angle, they're not really necessary. Mostly what they did was make me realize how often I apparently very slightly pick up the mouse when playing games, and while I might get used to it, the feeling of "stickiness" got annoying.

The Turret keyboard charges via a USB-C port, but the mouse is stuck with Micro-USB. You can charge the mouse from the keyboard, but bizarrely this uses a Mini-DisplayPort (on the keyboard side) to Micro-USB cable. At least the cable is included? This mismatch seems odd, but at least you won't need to charge often. Even with full Chroma RGB you'll get 11 hours of battery life for the keyboard, and 30 on the mouse. Switch off the lights, and the keyboard should last 40 hours. 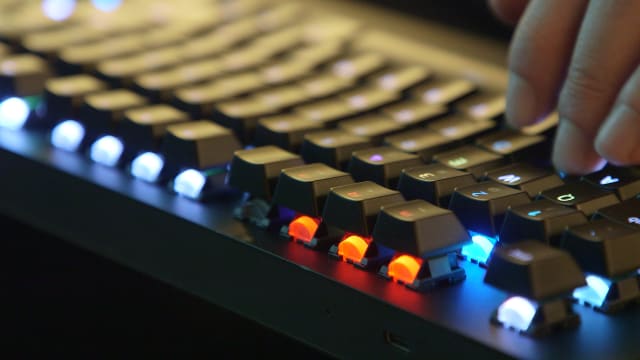 The Turret sports full RGB Chroma lighting that can react to a number of games, in this case showing a health bar.

The Turret keyboard also includes an "Xbox" key that acts the same as the button in the center of an Xbox controller, launching the system browser. On Windows 10 (which is also supported) this will instead act like a typical Windows key.

If you're looking for a convenient keyboard and mouse to use from a couch, the Razer Turret for Xbox One is well designed for the job, but expect to pay for that convenience. Pre-orders are online at $250.

In this article: av, CES2019, gaming, gear, hands-on, keyboard, microsoft, mouse, personal computing, personalcomputing, razer, razerturret, razerturretforxboxone, xboxone
All products recommended by Engadget are selected by our editorial team, independent of our parent company. Some of our stories include affiliate links. If you buy something through one of these links, we may earn an affiliate commission.