Back in 2014, CERN sought the help of over 1,300 contributors to help it conjure up a feasible plan for a new collider much, much bigger than the LHC. Now, the research organization has unveiled preliminary designs for the project named Future Circular Collider (FCC). Based on current plans, it will make the LHC (Large Hadron Collider) look tiny in comparison: the designs are calling for a massive particle accelerator 100 kilometers or 62 miles around. The LHC is only 27 kilometers or 17 miles long. It will also be up to six times more powerful than the smaller accelerator. 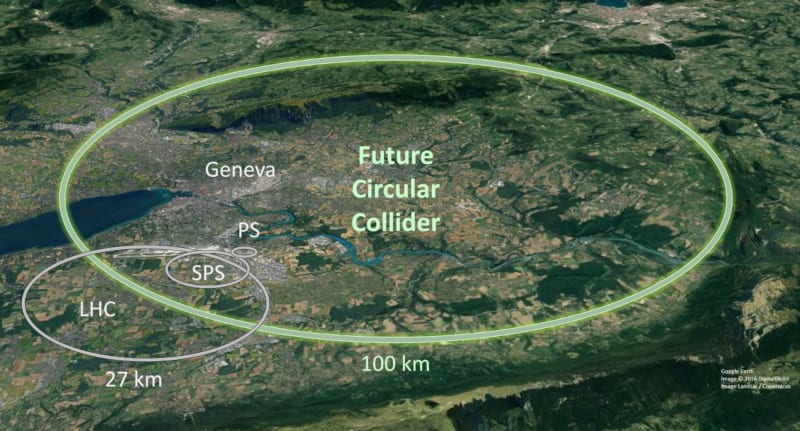 Gian Francesco Giudice, the head of CERN's theory department, explained that the project is such a huge leap from the LHC that it's "like planning a trip not to Mars, but to Uranus." The LHC hasn't discovered any new particles since the Higgs boson, so those advocating for the FCC are hoping that the FCC's more powerful collisions can do the trick. Giudice explained that "exploring the highest possible energies with bold projects is our best hope to crack some of the mysteries of nature at the most fundamental level."

That said, not everyone's convinced we need such a massive particle accelerator, especially when the project is expected to cost a whopping €21 billion (US$24 billion). Just because it's powerful doesn't mean the FCC will ever discover anything new, after all. Sabine Hossenfelder, a theoretical physicist at Frankfurt Institute for Advanced Studies, told Nature that the money might be better spent on a radio telescope for the far side of the moon.

Even though scientists are divided on the necessity of a massive accelerator, there's no question that it will be able to study already-known particles more closely. That won't happen until 2040 at the earliest, though -- CERN will continue using the LHC for the next couple of decades and is even planning on giving it some massive upgrades.