What we're watching: '7 Days Out: League of Legends'

An emotional look inside the life of an esports star.

This week reporter Nick Summers explores the sixth episode of Netflix's 7 Days Out docuseries. Coming from the producers of Chef's Table and Last Chance U,'this particular episode covers themes of tragedy and perseverance against the backdrop of esports competition. Yiliang "Doublelift" Peng is one of the best League of Legends players in the world. He's won multiple titles in North America and competed at Worlds, a prestigious tournament featuring the best teams from Europe, China, Korea and beyond, for many years. To understand his career, and the larger esports scene, I highly recommend the League of Legends episode in 7 Days Out, a six-part documentary series that debuted on Netflix last month.

The film follows Doublelift and the rest of Team Liquid as they compete for the Spring Split title (the League of Legends season has two halves, or splits, that feed into a qualification system for Worlds.) It starts with the semifinals that took place at the NA LCS (North American League of Legends Championship Series) studio in Los Angeles last March. The results, of course, won't be a surprise to longstanding League fans who watched the live broadcast. The interviews and backstage footage, however, provide a genuinely fresh and fascinating perspective for newcomers and veteran viewers.

After Liquid beats Echo Fox, securing a spot in the coveted grand final, Doublelift discovers that his 30-year-old brother, Yihong Peng, has stabbed their mother, Wei Ping Shen, to death with a knife and seriously wounded their father, Guojon Peng.

It's a heartbreaking moment.

The documentary spends some time recapping Doublelift's career, including the early disapproval of his parents. "We got into an argument and they kicked me out of the house," the esports star explains. "I made a Reddit thread on the League of Legends online community. And I said, 'I'm homeless now and I'm looking for advice or support.'" He stayed with Travis Gafford, an esports journalist and renowned League interviewer, until he could afford his own place. "Every month I would just try to scrape up as much money as possible to pay [Travis], and I never could," he says. "Toward the end, I started making more than a couple hundred dollars a month. Now, a couple hundred dollars is a joke."

By the 15-minute mark, I was tearing up. The outpouring of support for Doublelift and his tragic loss -- conveyed through interviews with Gafford, Team Liquid owner Steve Arhancet and Doublelift's teammate Kim "Olleh" Joo-sung, among others -- is sincere and genuinely touching.

Doublelift then explains his decision to compete with Team Liquid at the spring split finals a week later:

"I think the most practical thing, when you're going through something really hard, is just to try to move on. I don't really know how else to explain it. I've been through a lot of terrible times. Sometimes I want to cry, but I don't. I just move on. And I think it's ... I think it just makes a lot of sense to pour all of this energy that I have, and all of these feelings that I have, into something that I love doing, and something that will never, ever go away. No matter what happens, I'm always going to have the love that I have for my career and games and competing. If I let go of that, then I literally have nothing. I'm letting this thing consume me."

Doublelift is calm and fiercely driven to become the best "AD Carry" player in the world -- a flashy role characterized by heavy damage and the ability to "carry" a team to victory, particularly in the latter stages of a match.

The documentary follows 100 Thieves, Echo Fox and Clutch Gaming too. 100 Thieves, a team created by Matthew "Nadeshot" Haag, reaches the championship final after beating Clutch Gaming. The famously quiet team struggles to make much of an impact in the episode, however. Echo Fox, an organization led by former NBA star Rick Fox, fares better. The basketball veteran is charismatic and eloquently explains how, through his video-game-loving son, he discovered esports and started a team. Echo Fox top-laner Heo "Huni" Seung-hoon also steals the spotlight with his usual blend of comedy and swagger. 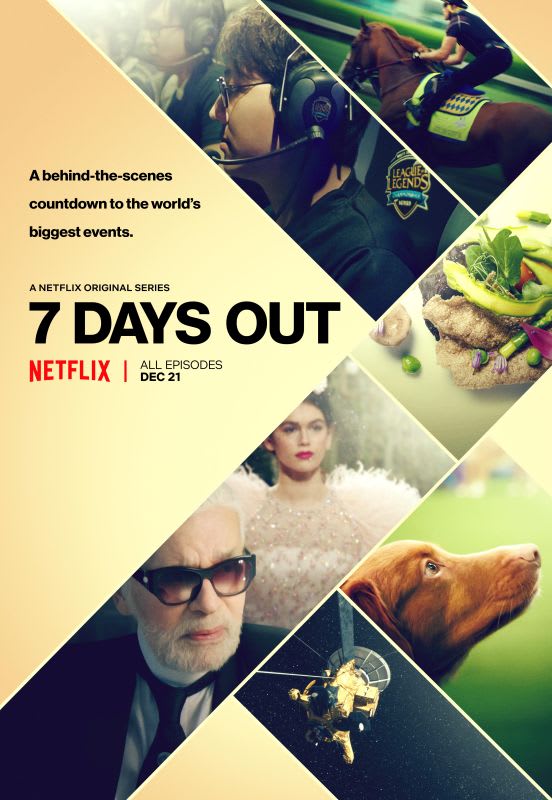 7 Days Out is meant to show the hidden effort behind some of the world's most impressive events. There is a scene about the Fillmore Miami Beach venue and its transformation into an esports stadium. It's too short, however, and the interview with Devin Murphy, the spring finals event lead, sheds little light on the associated challenges.

The episode has a fitting conclusion. Echo Fox wins its third-place match against Clutch Gaming, while Team Liquid trounces 100 Thieves in the finals. The documentary doesn't spend much time on the games themselves, however. Beyond a few match highlights, including "first blood" kills and baron steals, there isn't much to remember or follow.

The emotional climax, of course, is watching Doublelift celebrate the finals victory with his teammates. "You're hella good," Doublelift says to a crying Olleh after the game. "Our whole team is hella good." It's a special win that underlines Doublelift's phenomenal talent and relentless dedication to the game.

"Video games don't have to be an escape," he later explains. "They can also be a way to enrich your life. Every day that I practice really hard, I think of the people who helped me get there. And of course, I owe it to the game. Without League, I wouldn't have a job. Without my fans, I wouldn't have this life. It's easy to lose sight of that for a lot of people because they have a fallback, or they had an out. But this was the only way I could proceed with my life. So I really am super grateful for them."

If you love League of Legends, this is an excellent episode showing what happens in the week leading up to a championship final. The documentary is equally enjoyable, however, if you've never watched a professional game before. 7 Days Out explains esports in a way that everyone can understand and appreciate. More important, it treats the growing industry with the respect that every player and team owner deserves. Who knows? By the end, you might be interested in watching a Doublelift game or two.