More-flexible options are out there, but these solid cases do the job.
C. Velazco|01.25.19
@chrisvelazco

Sad as it seems sometimes, few things in life are as uniquely stressful as using a phone whose battery is on the brink of death. It's little surprise then that battery cases have become so popular. But unfortunately, owners of Apple's 2018 flagship smartphones haven't had many great options to choose from.

Recently, though, Apple made that list a little longer with its new Smart Battery cases for the iPhone XR, XS and XS Max. This move might have been inevitable, but you'd be forgiven for thinking Apple had given up on its battery case plans altogether -- after all, the company hadn't released a new mobile battery case in more than two years. Stranger still, devices like the XS Max and XR offer some of the best battery life we've ever seen in iPhones. Does Apple really need to be making these cases?

For the right people, yes. After a few days of testing, Apple's new Smart Battery cases are mostly great options for the power-paranoid person. Still, there are a few things you should keep in mind before giving Apple even more of your money.

Thanks to some shipping delays, the iPhone XR battery case arrived after cases meant for the XS and XS Max. Because of that limited testing time, this review focuses on battery-case performance for Apple's two XS models. We'll update this story after we've tested the XR version more thoroughly.

If you've seen one of Apple's older Smart Battery cases, you're mostly up to speed here -- these aren't unlike the company's standard silicone options, just with some big ol' battery humps. More importantly, these new models work as nicely with iOS as the originals did; when they're connected to an iPhone, you'll be able to check battery levels for the phone and the case through a widget in the Today View. (That said, it would've been nice if Apple included a readout for the case in the Control Center too. Right now it only shows the phone's current charge level.)

Don't be fooled by the similar design though: In the two or so years since Apple has produced a new battery case, it's changed its approach to these products. For one, the hump now sits low on the XS and XS Max's back rather than toward the midsection. That's a big deal for people who weren't so fond of the original design, which -- in the words of my boss Dana -- made iPhones looked like they had just "finished a big lunch." This time around, Apple's giving its phones big butts instead of big guts, and that's a good thing.

These design flourishes aren't pretty, but they give your hand something substantial to grip while you're texting or taking phone calls. The downside is, these make relatively thin phones like the XS feel much chunkier. Things get even dicier with the iPhone XS Max, which was already a handful. The added heft won't be a deal breaker for everyone, but there's little question these cases make iPhones less comfortable to use.

You'd never know just by looking, but Apple did considerable work under that soft-touch exterior too. Rather than stick a single large battery into the frame of the case, it instead used two batteries that collectively work out to a total capacity of 1,369mAh. But here's the thing: 1,369mAh might not sound like a lot when you consider that the smaller iPhone XS has a 2,658mAh battery. On paper, one might easily assume that the battery case only extends that phone's longevity by about 50 percent. Not true. We'll dig into this more a little later, but the battery case generally doubled the XS' battery life.

Anyway, there's also a Qi wireless-charging coil baked into the top of the hump, so you can plop the whole thing down onto your wireless charger. It's a helpful flourish if you've already invested in the right charging accessories, but you'll almost certainly want to use a Lightning cable if you want to charge the whole package quickly.

It's also worth noting that device-charging priority changes depending on what kind of charger you're using. If all you have is the standard, tiny 5W iPhone charger, the phone charges before the case does. The 18W charger that comes with devices like the new iPad Pro fast-charges the iPhone, assuming you have the right USB-C to Lightning cable. And if you're using a 30W charger, the phone and the case will fast-charge at the same time.

Of all the new phones for which Apple built these battery cases, the iPhone XS stands to benefit the most: When we reviewed the XS, we found that with frequent use, the built-in battery generally ran between nine and 9.5 hours before going completely dry. We found that the external battery adds an additional nine to 10 hours of power though.

Of course, that number is largely dependent on what you're doing with your phone. In my case, I measured the battery's performance while going through my usual routine. That means lots of podcasts and mobile hotspot time while in transit, near-constant Slack and Gmail use, and a spot of gaming now that Langrisser is out, et cetera.

Your mileage may vary, but with what feels like normal, fairly consistent use, the case essentially doubled the XS' battery life. If you're the kind of person who uses your iPhone for a bit and then puts it away for long periods of time, you can expect even better performance. (The same is also true for last year's iPhone X, which works with the XS battery case despite not fitting perfectly.) 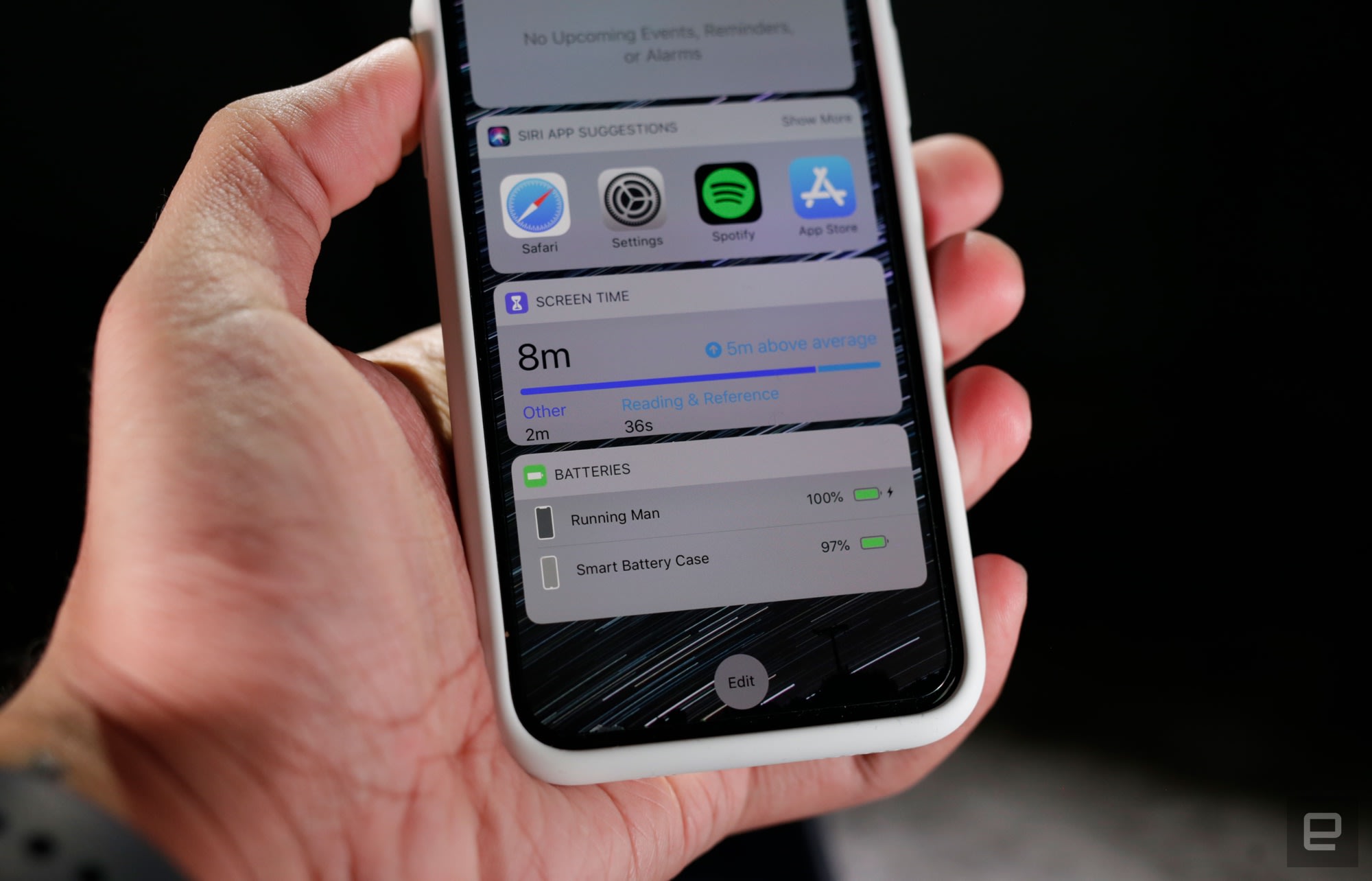 Going into this review, I was concerned that the extra weight of the battery would make the already-small XS uncomfortable to use. It's actually not that bad: The added heft never goes unnoticed, but the total package isn't overly cumbersome. That said, the hump plus the grippy silicone mean pulling the encased phone out of my pocket is often a struggle.

I wish I could say the same about the XS Max's battery case. Like its little brother, this external battery adds about nine to 10 hours of use, but the Max just doesn't need it as much. By dint of being one of the biggest iPhones Apple has ever made, the XS Max already has a giant battery that routinely lasted for 12 hours of frequent use. 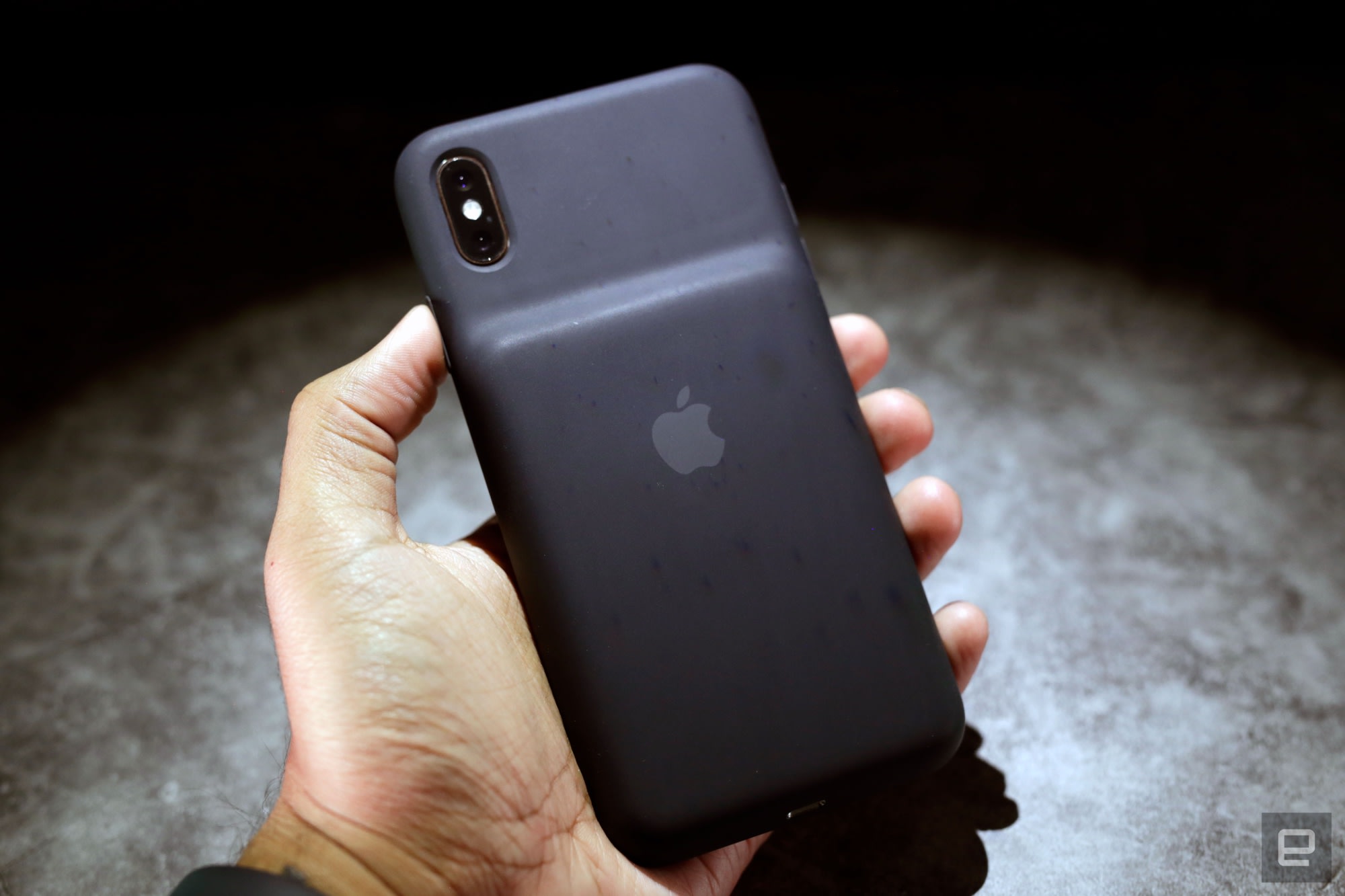 There's no question the Smart Battery Case does its job well, but it's arguably overkill for most people who splurged on Apple's big phone. (For those keeping track, Apple never released a larger version of its Smart Battery Case for its Plus-sized iPhones, presumably for this very reason.) The idea of being able to use an XS Max for two days off a single charge (three, if you're lucky) is definitely appealing, but since most people charge their phones fully at least once per day, I have to wonder who really benefits from this thing.

And let's not forget that this case makes the XS Max feel pretty huge. You can forget about slipping it into your pocket unobtrusively. I know my share of people who already find the XS Max a little unwieldy, and for them, the Smart Battery case is a nonstarter. It nearly doubles the phone's diameter. Anyone with small hands will find it close to impossible to use one-handed. 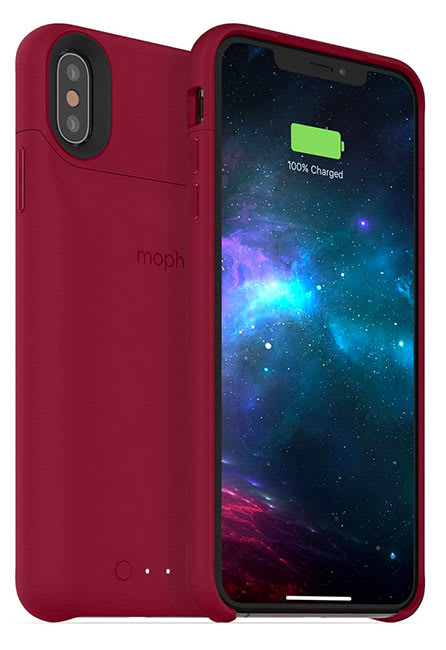 Mophie's forthcoming Juice Pack Access is also worth a look.

If you're willing to live with the extra size, Apple's Smart Battery cases are among the best ways to keep your iPhone XS or XS Max running longer. That's a pretty big "if" for some of you though. The XS' battery case is a solid buy, but it bulks up the Max to the point where it just doesn't work for everyone. (Granted, this is an issue that faces all XS Max battery cases, but it's still worth pointing out.)

Also, $130 isn't pocket change, and other options in the same price range offer more bang for your buck. You could easily pick up a more flexible power bank like Mophie's USB-C XXL Powerstation that'll charge your phones and your computer (assuming it draws power over USB-C) for around the same price. And while there aren't loads of XS and XS Max battery cases from reputable vendors, there are a few worth noting. Mophie's $120 Juice Pack Access will pack plenty of power for the XS and Max when it launches; and while it isn't specifically made for the XS, Moment's $100 iPhone X battery case works fine with the newer phone and lets you attach a variety of new camera lenses.

All told, Apple's new Smart Battery cases give the XS and XS Max dramatically better battery life, and they tie elegantly into iOS to boot. When you consider that and the limited competition out there, these are probably the best battery cases you'll find at the moment. That's great when you're only concerned about your iPhone. If that isn't the only gadget of yours that goes dry during the day, though, your money is better spent on something more flexible.