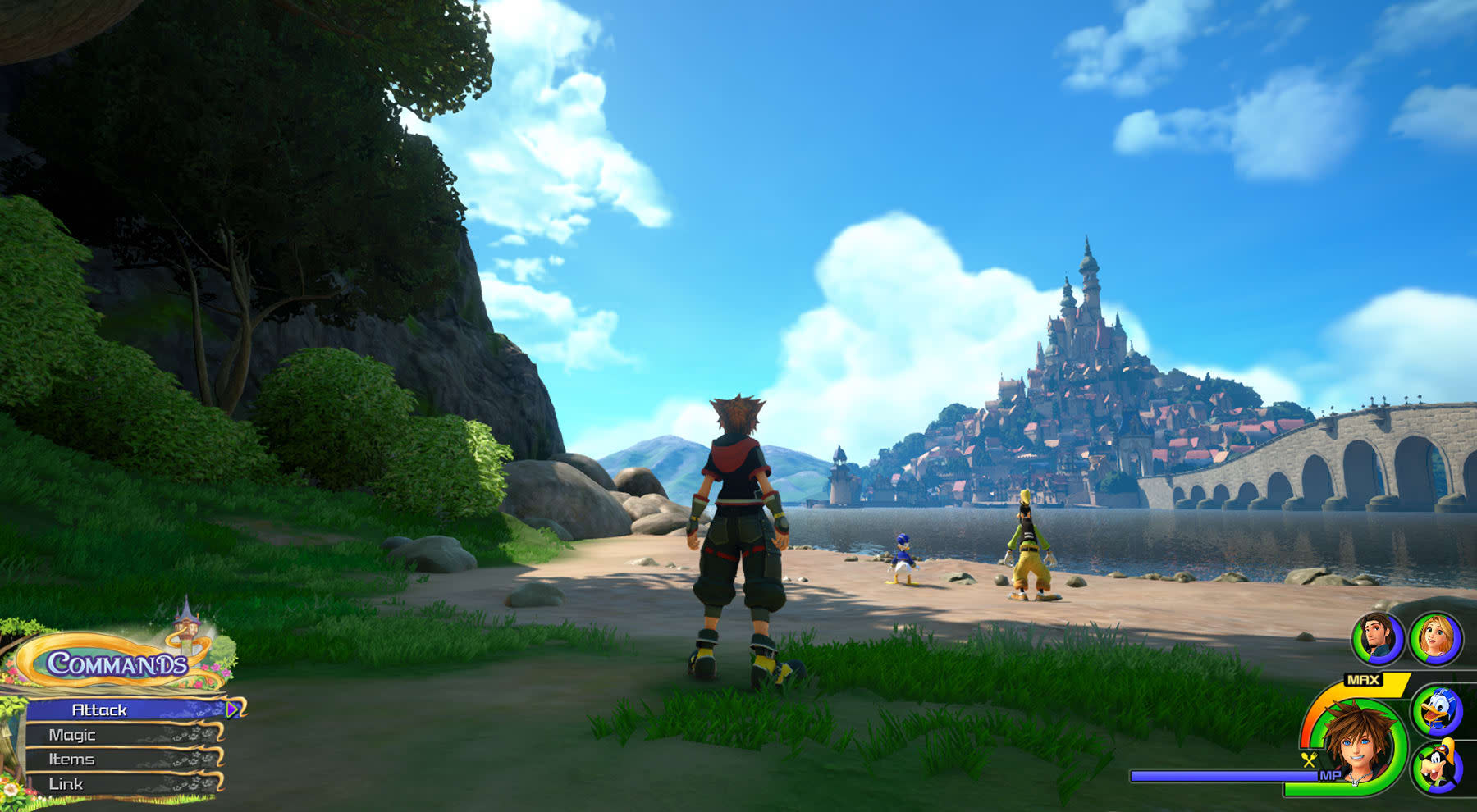 Some are nearly indistinguishable from their movie source material.

There's the accessible and mesmerizing combat, which trades the turn-based roots of the Final Fantasy franchise for a frenetic blend of keyblade combos, summons and transformations. Some fans also enjoy the bizarre and, at this point, borderline nonsensical storyline concerning Sora, his friends and the eternal struggle between light and darkness. Others are simply enamored by the chance to explore their favorite Disney worlds with Donald Duck and Goofy.

If you fall into the latter camp, good news: The Disney and Pixar-themed locales in Kingdom Hearts 3 are absolutely stunning.

Turn on browser notifications to receive breaking news alerts from Engadget
You can disable notifications at any time in your settings menu.
Not now
Remy serves as your personal chef in 'Kingdom Hearts 3.'

The total count is a smidge lower than Kingdom Hearts 2, the last major release (I'm not counting 0.2: Birth by Sleep – A Fragmentary Passage, or any of the HD re-releases) for a home console. At first, I was a tad disappointed. I love the 'road trip' vibe of the Kingdom Hearts franchise and how it ties to together such a vast collection of characters and worlds.

But then I played through Olympus. The ancient home of Hercules is absolutely massive -- by Kingdom Hearts standards, anyway. The classic Disney world covers Thebes, large chunks of Mount Olympus and, at its summit, the heavenly home where Zeus and the other Greek gods live. Admittedly, it doesn't compare to the sprawling maps found in modern open-world RPGs like Assassin's Creed Origins. But that's okay, because Hercules is only a piece of Kingdom Hearts 3. Put all of the worlds together and you have a varied and incredibly diverse universe to explore. 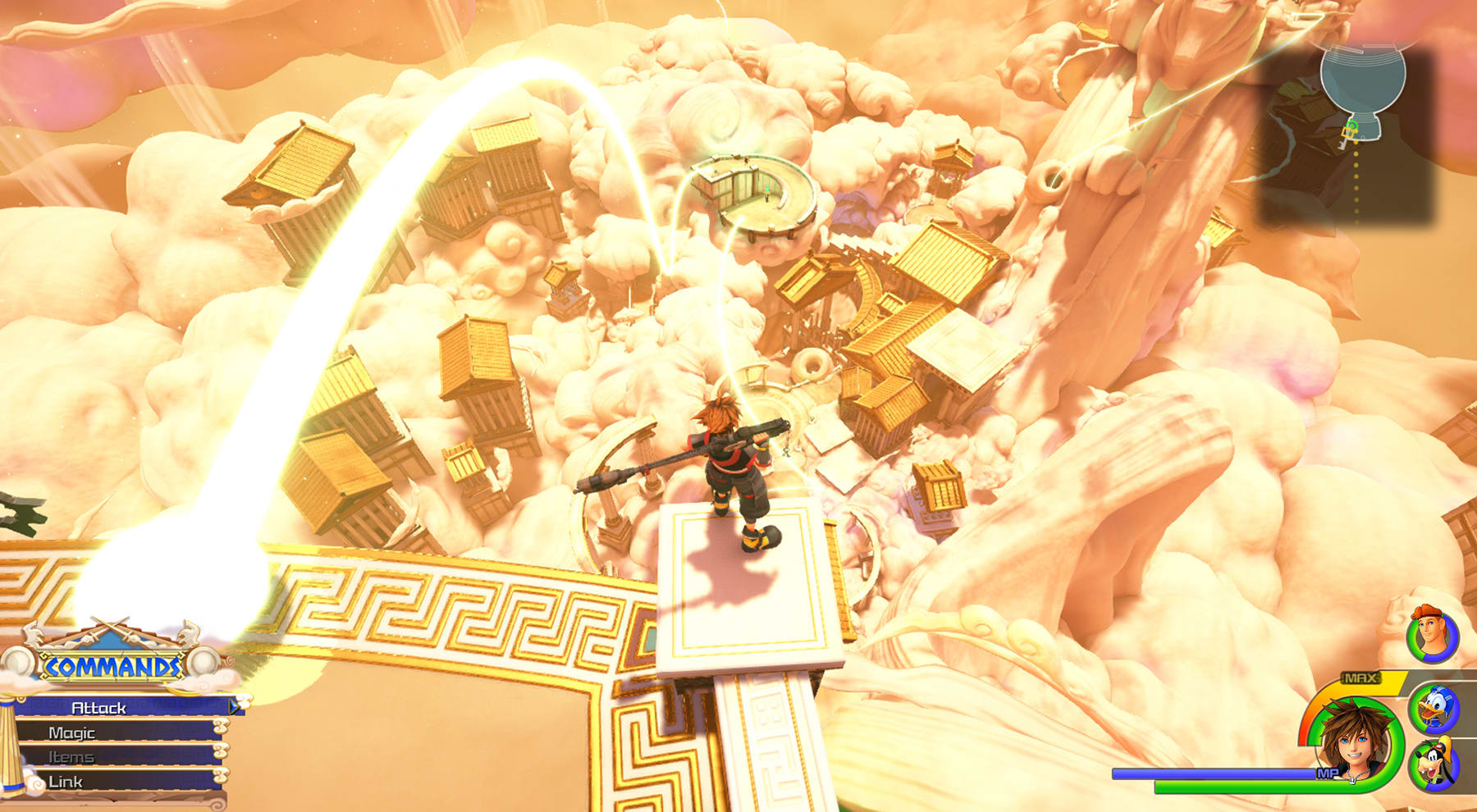 The Realm of the Gods is full of twisting grind rails.

In previous franchise entries, the worlds were often barren and boxy; a series of interconnected rooms to battle through one after the other. There were exceptions, of course, and the map designs have slowly improved since the original game was released for the PlayStation 2 in 2002.

Kingdom Hearts 3, by comparison, is a massive improvement. The worlds are still linear -- there's always an obvious direction to head in -- but the different sections vary dramatically in shape and size. Thebes is fairly open, for instance, with wide streets and large plazas. The mountain trail, however, alternates between narrow paths and rocky outcrops just large enough to stage a battle with the monstrous heartless.

All the worlds have a greater sense of verticality, too. Sora can run up any surface that has a light shimmer, including Rapunzel's tower and the skyscrapers of San Fransokyo. The level designers have used this to their advantage, building worlds that slowly shift between higher and lower elevations. In Toy Box, for instance, you visit a store with multiple floors. Sora's quest takes him to different sections, themed around video games, dolls and outdoor equipment, and even through the ventilation system. Grinding a giant gumball machine to reach a higher floor, only to swan dive back to the bottom, is always exhilarating.

Andy's bedroom is just as you remember it.

Kingdom Hearts 3 is a gorgeous reflection of modern console and PC hardware. The extra horsepower has allowed Square Enix to finally match the visual fidelity of its Disney-owned source material. Olympus looks fantastic and the Pixar-themed worlds are almost indistinguishable from their movie counterparts.

The first time I stepped on to the Laugh Floor in Monsters, Inc. -- the hangar-like room where Mike and Sully work -- I let out an audible gasp. Everything was perfectly placed, including the door clamps and cluttered workstations. You can inspect those desks, too, with the game's built-in photo mode. I must have spent 10 or 15 minutes looking at each one, zooming in to see if the team had left any easter eggs (they had!)

Some iconic movie locations, such as Andy's bedroom, are unmissable in Kingdom Hearts 3. Others require a little bit of exploration. While searching Port Royal, for instance, I found the spot where Elizabeth Swann fell from at the start of Pirates of the Caribbean: The Curse of the Black Pearl. Later, I stumbled upon the gloomy jail cells where Captain Jack Sparrow is frequently held by the Royal Navy. 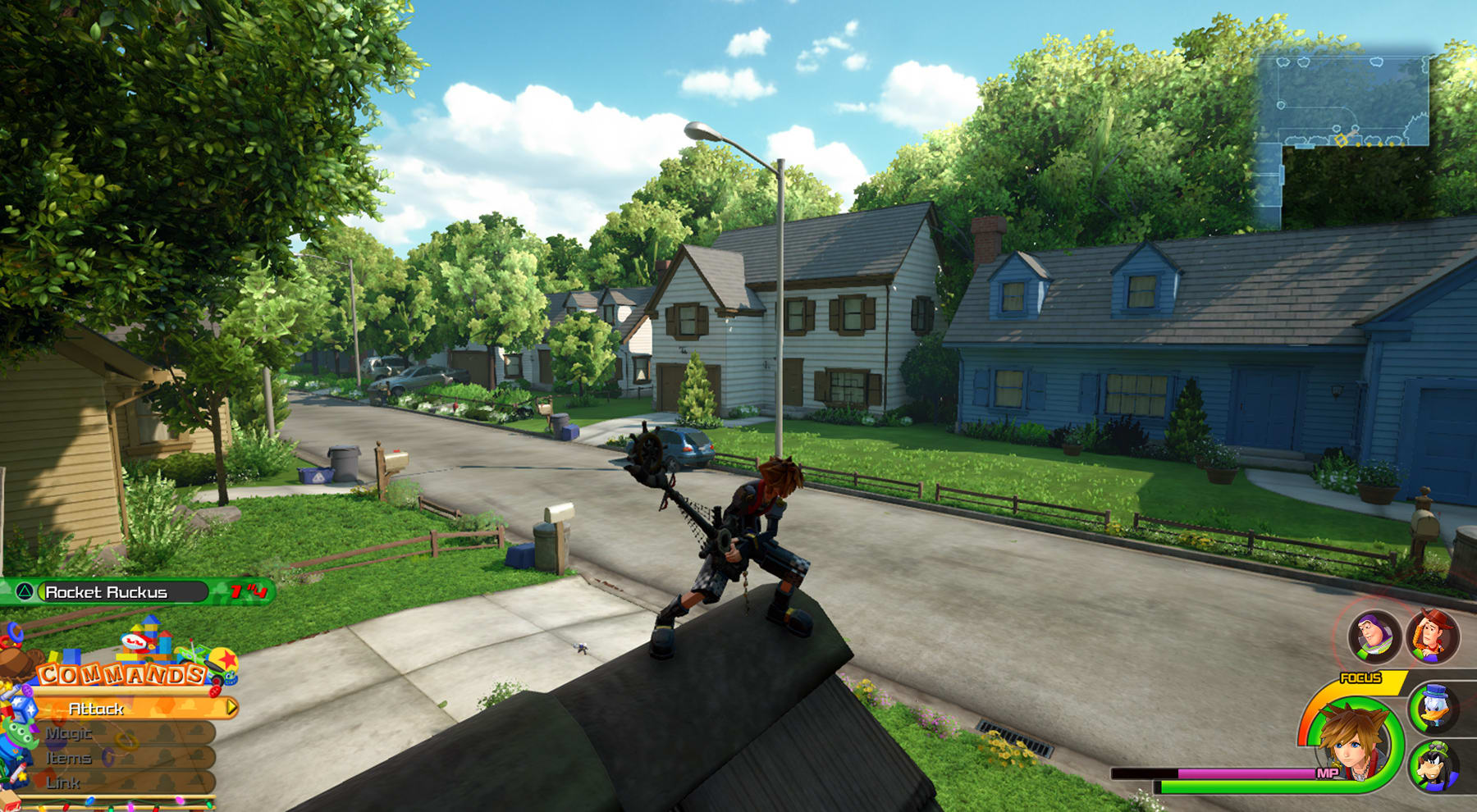 You can run across the road, but not up the neighbor's driveway.

Kingdom Hearts 3 also gives you the opportunity to explore places that are only glimpsed or hinted at in the original movies. I loved exploring the docks of Corona -- the cheery city that Rapunzel and Flynn Ryder journey to in Tangled -- and peeking behind the garage of Andy's house.

Every world has some obvious omissions, however. You can't travel to Monsters University, for example, or explore the Pizza Planet restaurant from the first Toy Story movie. The cuts are understandable -- to make a game this large, Square Enix had to be selective and stick to maps that serve the story of each world. Still, I can't help but wonder what the halls of Arendelle Castle would have looked like in Kingdom Hearts 3.

You'll also find innocent bystanders -- a rarity in the Kingdom Hearts franchise -- in some of the game's residential areas. Once you've completed the Big Hero 6 story, for instance, you'll see groups of people milling around San Fransokyo. Likewise, Thebes is populated once you've saved the city with Hercules. The volume and variety of people pale in comparison to triple-A blockbusters such as Grand Theft Auto V and Insomniac's Spider-Man. Nevertheless, they're a welcome addition that reinforces the story and makes each world feel like a real, lived-in place. 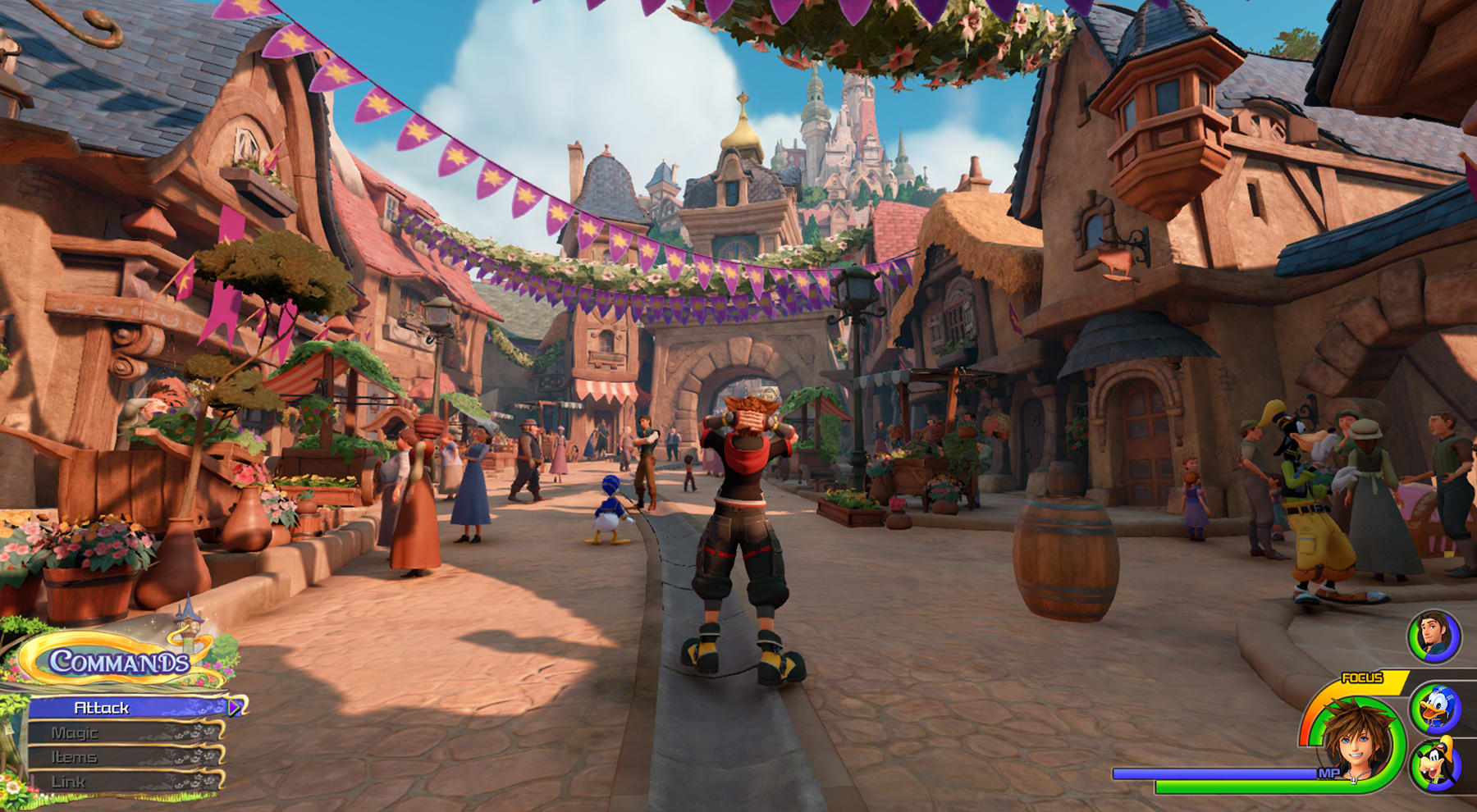 Corona is a stunning city with market stalls and a dancing mini-game.

As I played through some of the new worlds, I couldn't help but think: "This is probably the best video game adaptation that will ever exist for this movie." I can't see Disney making another Tangled or Monsters, Inc. video game, for instance. If that's the case, Kingdom Hearts 3, and the work that Square Enix has done over the goodness-knows-how-many years, is even more important and impressive. It's not only a great game but the best way, possibly ever, for Disney addicts to explore movies that are unlikely to ever get sequels and, by extension, tie-in video games.

The breathtaking worlds are the realization of a long-held dream for many Kingdom Hearts fans: to play through levels that are visually indistinguishable to the films they hold so dear. If, like me, you can't keep up with the weirdly convoluted plot and lore of Kingdom Hearts 3, you can appreciate the artistic and technical achievement behind each world instead. It took a while, but Square Enix has finally, *finally* delivered.

'Kingdom Hearts 3' launches on January 29th for PS4 and Xbox One.