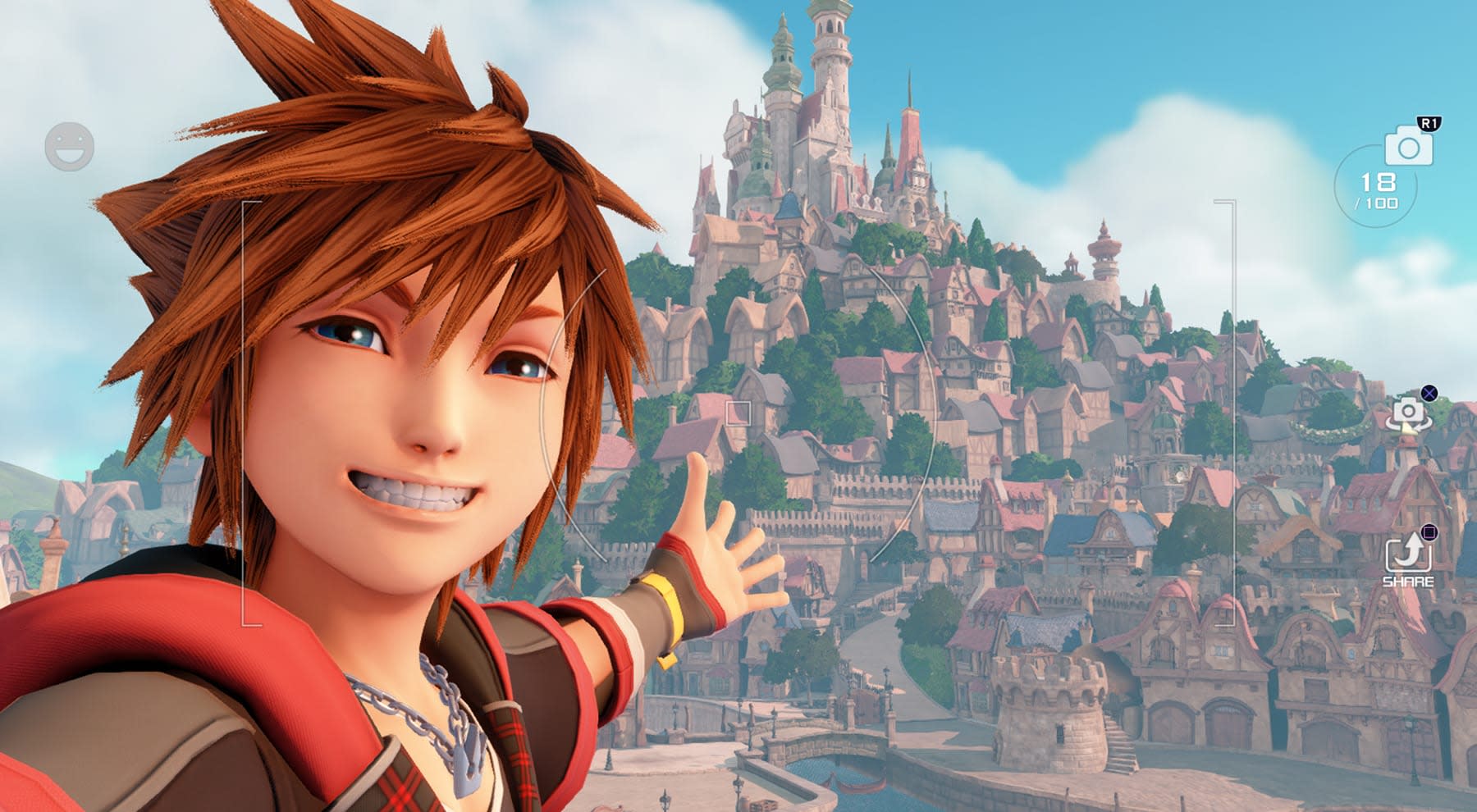 Sora is all about the 'gram in 'Kingdom Hearts 3'

In Kingdom Hearts 3, Sora gets an iPhone.

The fictional handset was built by Chip and Dale (I like to think their company is called Acorn Computers) at Hollow Bastion, one of the fictional worlds dreamt up for the Disney-meets-Square-Enix mashup series.

The Gummiphone allows Sora to call his friends and, conveniently, both deliver and receive plot-critical information while he travels with Donald and Goofy to distant worlds.

It also takes pictures -- and oh boy, does Sora take a lot of pictures in Kingdom Hearts 3. At least, my version of the keyblade wielder does, anyway.

At any point in the game, you can press the DualShock 4 touchpad (or the corresponding button on your Xbox One controller) and view the world through the Gummiphone's camera. You can zoom in, change the depth of field and even flip to the front-facing camera for an adorable selfie.

It's more than a glorified photo mode, though. So-called "lucky emblems," shaped like Mickey's iconic head, are scattered throughout the game in hard-to-find locations. Capture these in just the right way (a square box will turn yellow when you've achieved the right distance and angle) and you'll be rewarded with some helpful in-game items. 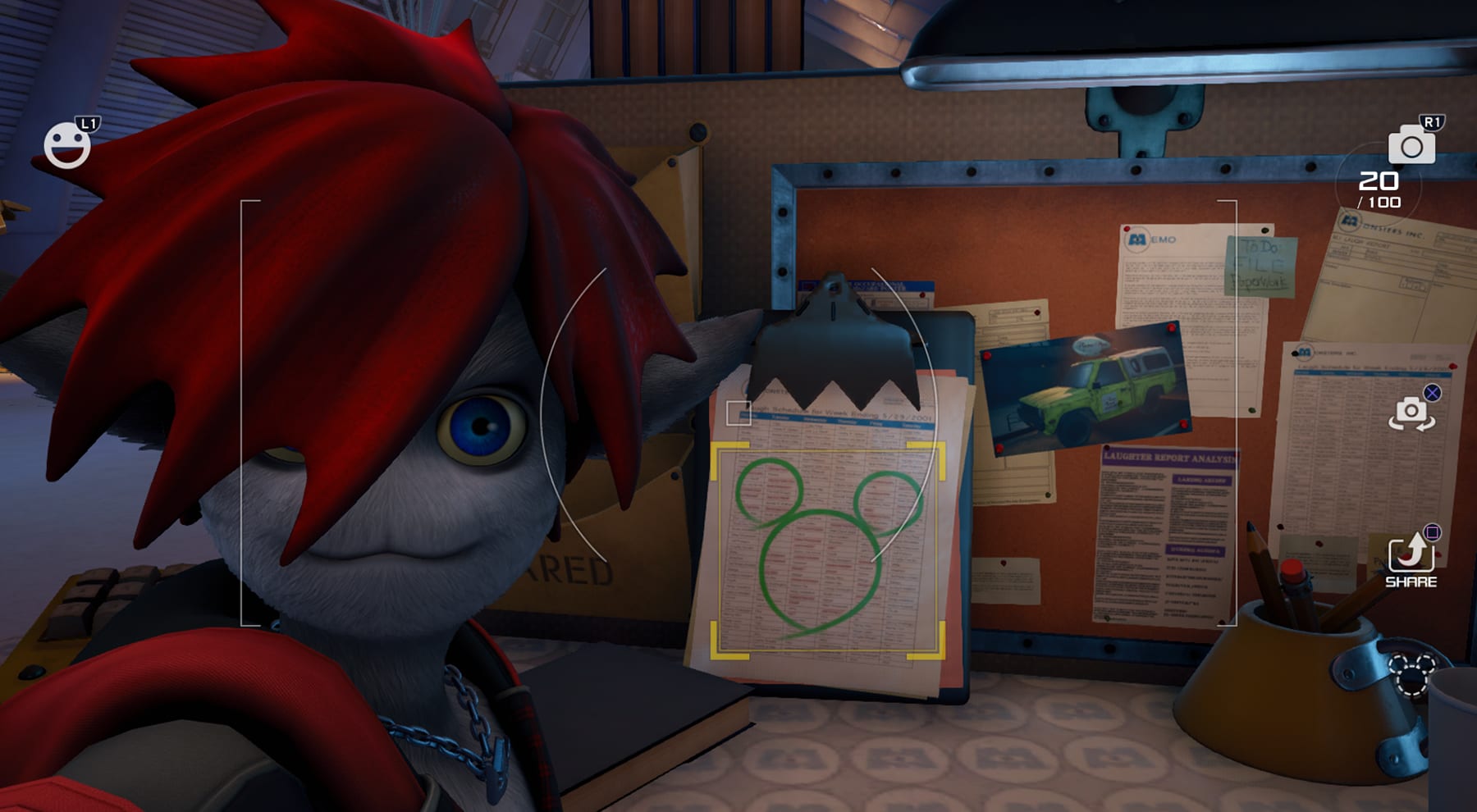 Every world has a handful of emblems to find.

Of course, I leapt into this challenge wholeheartedly. I sprinted through Twilight Town, Toy Box (Toy Story) and the Kingdom of Corona (Tangled), scouring every wall and cliff face for clues. Saving the world from Xehanort and the newly reformed Organization XIII? That could wait a few hours.

A little ways into my journey, I unlocked a whole new series of photo challenges. The furry and cat-like Moogles wanted me to capture specific enemies in battle, such as Flame Cores and Chief Puffs. I hadn't expected this. They also demanded snaps of specific objects and places, such as the Hercules statue in Thebes and the tram in Twilight Town. It would require some hefty backtracking, of course, and slow down my progress in the main storyline, but I didn't care. I was already obsessed with becoming the greatest photographer in the Kingdom Hearts universe.

Okay, I know what you're thinking. "Nick... you're out of control. Sora and his friends wouldn't *actually* behave like this."

Canonically, Sora loves Instagram. Or an app inspired by it, anyway.

Load a new world and the game will show you a relevant post from an unnamed photo-sharing app. Instagram isn't named, of course, but the similarities are undeniable. Sora has an account -- you can clearly see his name and profile picture -- and knows how to write witty captions

I didn't teach Sora this. Heck, I didn't take any of these photos, either. The spiky-haired teenager posted them all on his own!

It's not just Sora, either. Many of his closest friends and allies post too.

Sora's photo-taking antics make sense, in a way. What's he going to do after saving the world? The keyblade master has never had a job, as far as I can tell. Maybe he'll retire as an "influencer" on Destiny Islands, posting photos of Paopu Fruit and gorgeous sunsets by the beach. Or become a "digital nomad" and make collaboration videos with different Disney heroes.

The possibilities are endless.

'Kingdom Hearts 3' launches on January 29th for PS4 and Xbox One.

Who took this for Sora? Does he carry a GorillaPod?
Press L1/LB and Sora will crack a cheesy grin.
Sora, Donald and Goofy have a long-running joke about being 'half-pints.'
Linger for long enough and your pals will pull different poses.
The Gummiphone can make and receive calls, too.
All products recommended by Engadget are selected by our editorial team, independent of our parent company. Some of our stories include affiliate links. If you buy something through one of these links, we may earn an affiliate commission. All prices are correct at the time of publishing.
View All Comments
Sora is all about the 'gram in 'Kingdom Hearts 3'