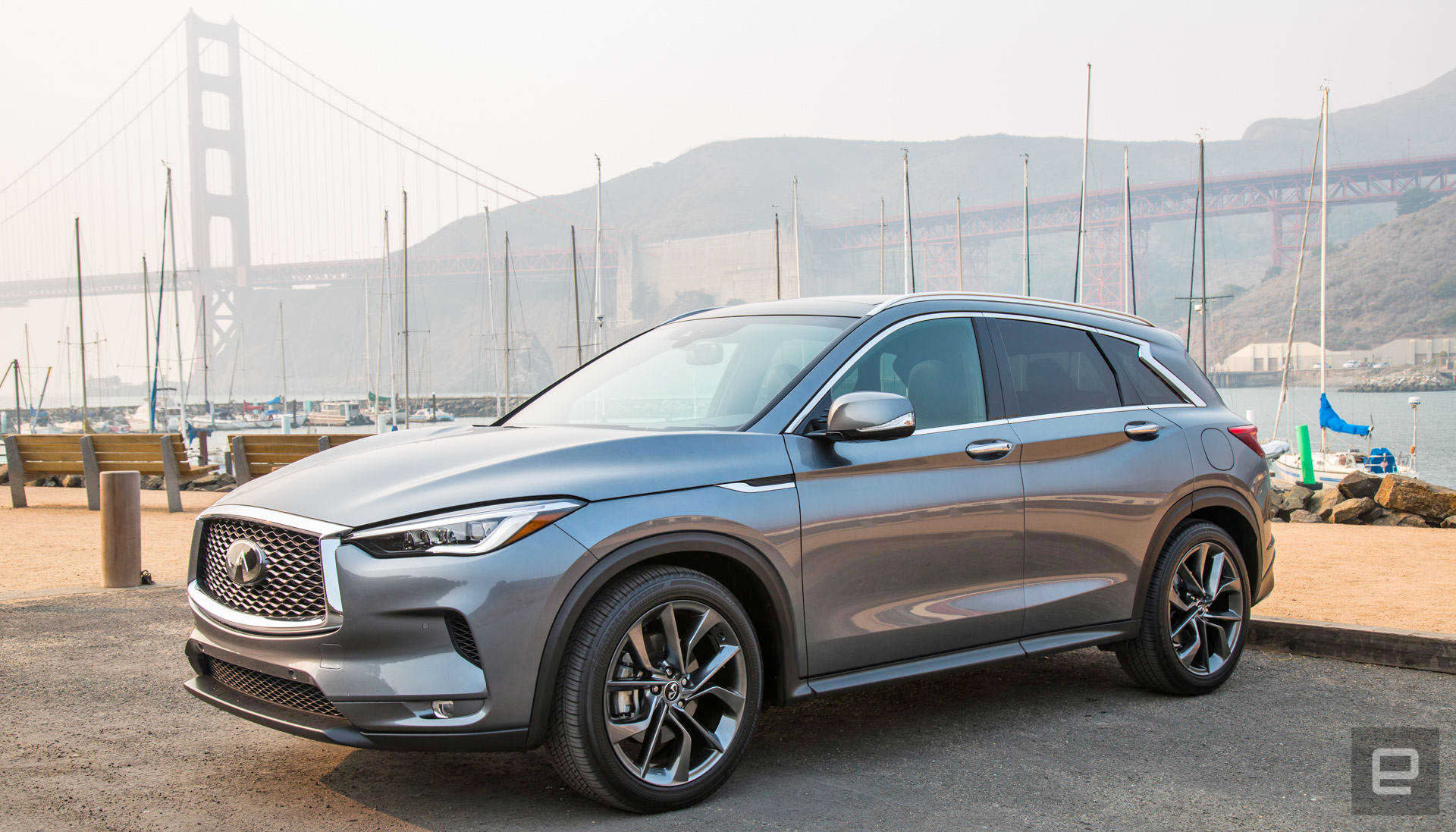 When Infiniti announced that the QX50's turbocharged inline four-cylinder engine would have variable compression, my first two thoughts were "wow that's incredible" and "I can't wait to see how this works in a hybrid." The QX50 is not a hybrid, but what the automaker has accomplished is amazing. But it still needs a little fine-tuning if you're expecting a huge increase in fuel economy.

Starting at $36,550, the QX50's impressive engine adjusts its cylinder compression ratios from 8:1 and 14:1 on the fly. It can reduce fuel consumption and then deliver the power people expect from a luxury SUV all within 1.5 seconds. it's a fancy bit of engineering that you can watch in real time via the dashboard display.

An example of where it works best is entering the freeway. Coming off the on-ramp you want to be able to stomp on the accelerator to get up to speed with the rest of traffic. That's where the engine adjusts itself for power with 268 horsepower and 280 pound-feet of torque available. Once you're cruising along, it adjusts the compression of the engine to be less powerful, but more fuel efficient. The result is 24 miles-per-gallon in the city and 30 highway for the all-wheel-drive version of the QX50. In my driving tests, I averaged about 26 miles per gallon. A nice middle ground, but not as impressive as I had hoped and more in line with the fuel efficiency of the BMW X3 and Audi Q3. Both of which have 4-cylinder engines.

Hopefully, future iterations of this tech will be more efficient. Again, what Infiniti has done is outstanding from a technical perspective. In real-world tests, it's just not as impressive as I had hoped. Fingers crossed for a hybrid version in the future. 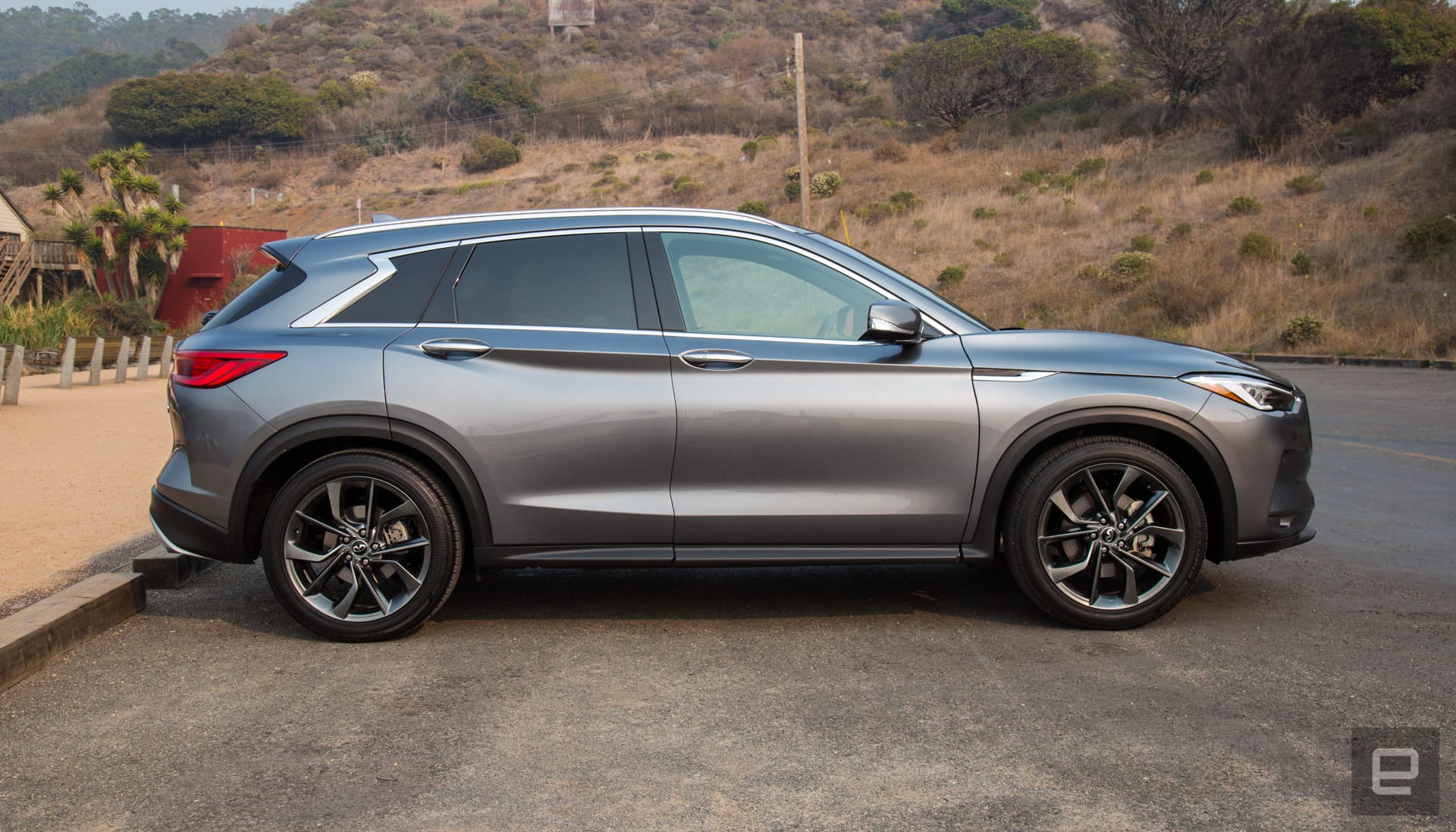 None of that should take away from the fact that the vehicle itself delivers as a luxury SUV. As a whole, the SUV market is brimming with vehicles that look a bit too similar. The QX50's sleek lines help it stand out from the pack with something that resembles flowing water moving down the highway instead of a box with smoothed out edges.

The interior of the QX50 is nearly as beautiful and many a passenger remarked how nice it was when they got in the car. Which is telling, considering how many different vehicles (including quite a few luxury ones) I ferry my friends around in. It's comfortable and luxurious without feeling too over the top.

The interior tech though, that's a different story. The infotainment system uses two displays -- the top one is for navigation while the bottom serves as the touchscreen control panel. First off, it doesn't support CarPlay or Android Auto -- a huge bummer. Secondly, the top display doesn't seem to have as high a resolution as the lower one which is just weird. Overall, the whole thing feels dated. Fortunately, Infiniti says it's working on a new infotainment system that'll arrive in 2021. So I look forward to trying that out. 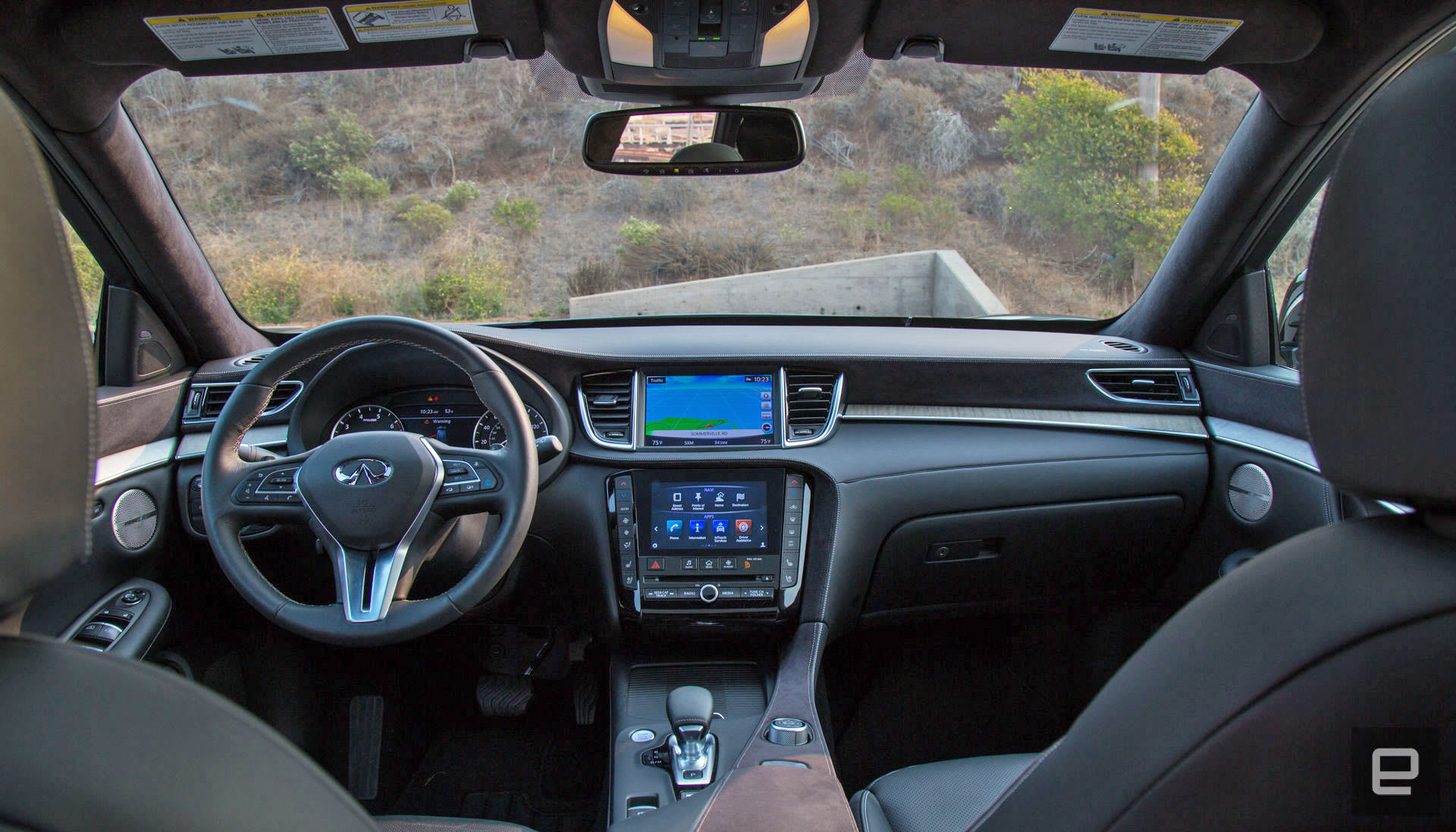 One piece of tech that does impress is ProPilot Assistant. The QX50 is the first Infiniti to get the driver's assistance package from parent company Nissan. The combination of adaptive cruise control and lane-keep assistance continues to impress and on a luxury vehicle like this, it makes sense. It did a splendid job tracking lane markings and vehicles ahead of it. It was tripped up by sharper than usual turns on the highway, but that's pretty much on par with most other semi-autonomous systems out there right now.

The 2019 QX50 is a fantastic upgrade from Infiniti that's gotten a much-needed redesign. It looks about a thousand times better than its predecessor both inside and out. The powertrain (while not as fuel efficient as I hoped) is a good first start of something I hope will lead to more efficient engines and it drives the way you expect a small luxury SUV to drive, with confident purpose in most situations. The only real disappointment is the infotainment system not supporting CarPlay and Android Auto and being in need of a general refresh. Turns out even pretty things have their issues.