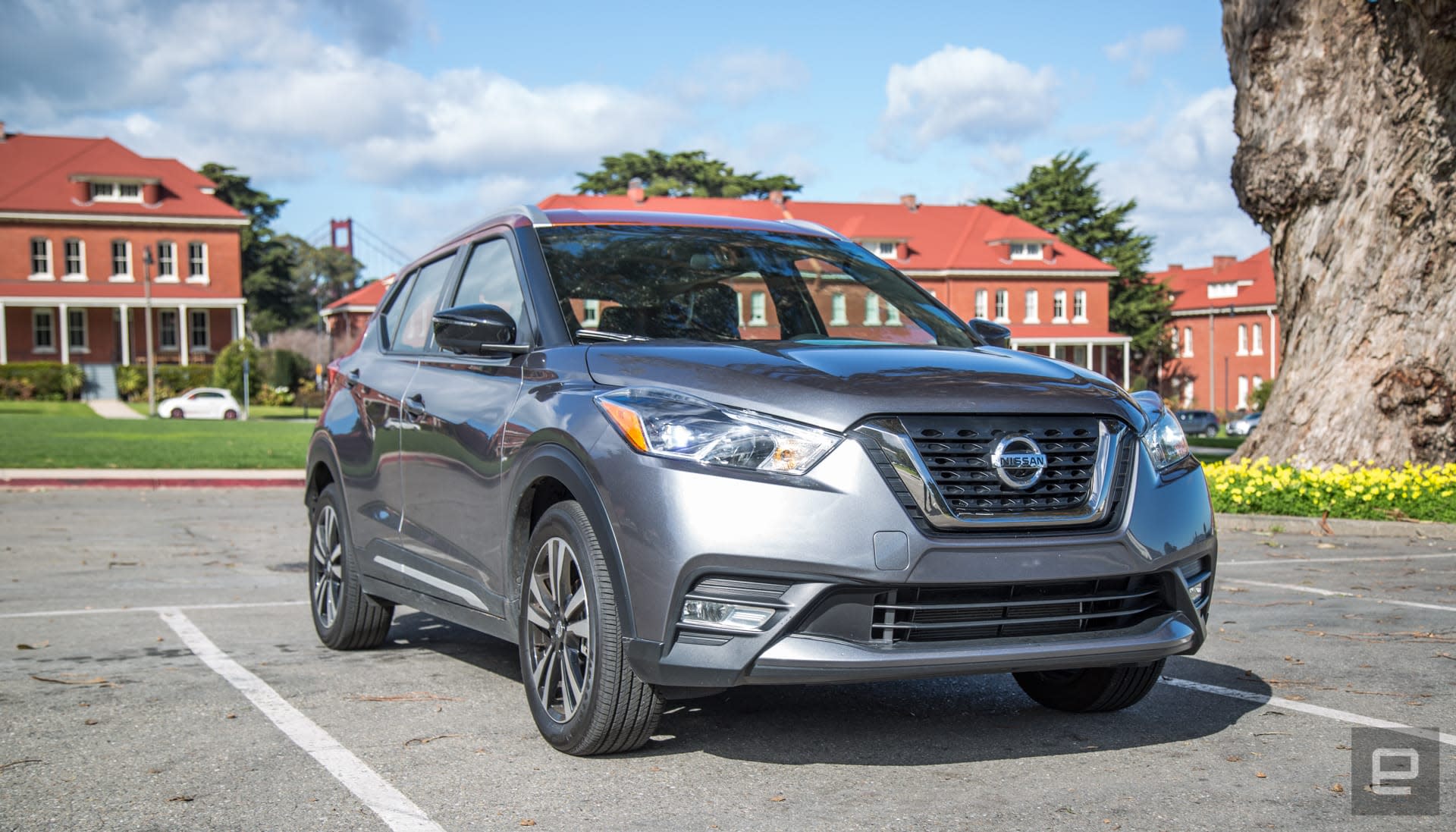 The Nissan Kicks is a cheap crossover that's still high-tech

It’s for the cool kids that aren’t in a hurry.

Inexpensive entry-level vehicles are typically drab affairs. Beige boxes with the minimum options and styling that can be described as sadness on four wheels. The Nissan Kicks (yeah, with an S) is different. It's fun, quirky and has just enough tech to keep smartphone-addicted new car buyers happy.

Starting at $18,450, the Kicks is targeting those looking for their first new car (young people) or inexpensive second vehicle (parents buying a car for their kid). In other words, its Nissan going after Gen Z with style and a little bit of attitude. The small SUV should appeal to them after spending most of their lives in a larger vehicle. It has the utility to carry all their stuff (electric skateboards and I don't know, boxes of vapes?) thanks to 25.3 cubic feet of cargo space in the back. But it's short wheelbase means it can fit in car-sized parking spaces.

The infotainment system is essentially a conduit for a smartphone. The seven-inch touchscreen supports CarPlay and Android Auto. The in-car system doesn't even have navigation, which is fine because at this point everyone under the age of 30 has been using Google Maps so long hopping to another mapping system would seem like blasphemy. One issue with this system is that it suffers from some serious latency. Sometimes you'd swipe the screen and wait a beat before anything happens.

What it lacks in a fancy infotainment system it makes up for in safety. The Kicks comes with Automatic Emergency Braking and a rearview monitor that you can actually see. For this price point, the rear-camera view usually resembles a pixelated videogame instead of the real world. If you move up a trim (to the SV for an additional $1,710), the Kicks comes with rear traffic alerts and blind spot alerts. For $680 more to the SR trim, you get something you typically only see on luxury vehicles, a 360-degree view of the car. 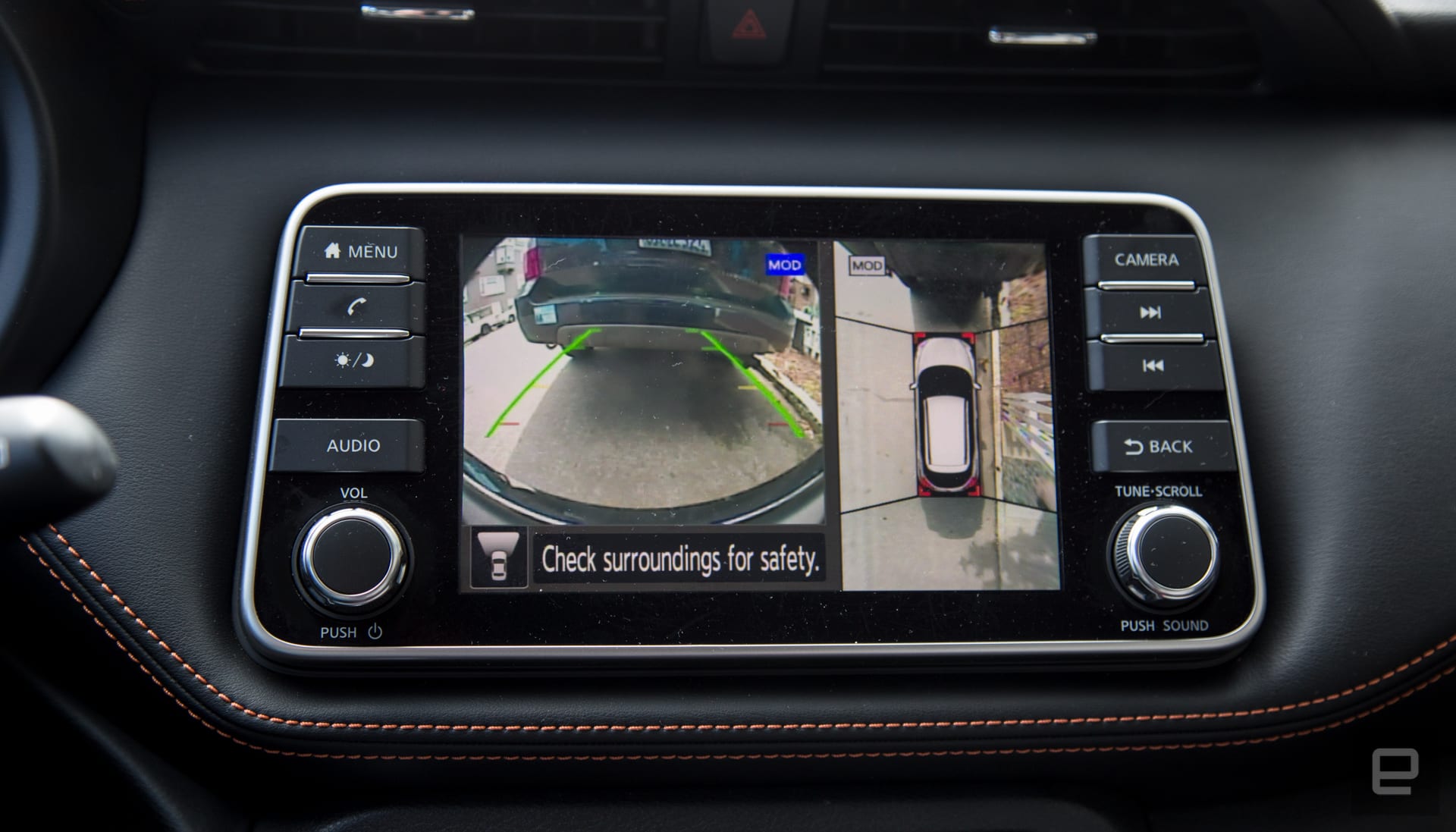 The 360-degree overhead view is one of the more delightful surprises available for the Kicks. It makes parallel parking easier and can help navigate the driver out of tight parking spots.

Another fun discovery are the seats. They're surprisingly comfortable and ready for road trips to Coachella. An interesting addition to the driver's chair is a Bose speaker in the headrest. You can adjust the sound coming out of the speaker but for the life of me, I can't 100% tell you it improves the sound system. I'm assuming it does, but you can't turn it off so I couldn't do any real A/B testing with it. It is a fun conversation piece at the very least.

The dash itself -- while not as quirky as the exterior -- has an inviting design with everything placed where it should be while conveying a sense of kookiness. Sadly the design team seems to have run out of steam when they got to the doors. The cheap plastic on them looks like a slab with a hole cut out for the handles. They also seem to gather scratches the way Jack Paul attracts controversy. The Kicks I had already had some battle scars on the inside handle and down by my feet. The best fix for that is to keep your eye on the road and forget that, at its core, the Kicks is still an entry-level car with the compromises that come with it. Like lack of power. 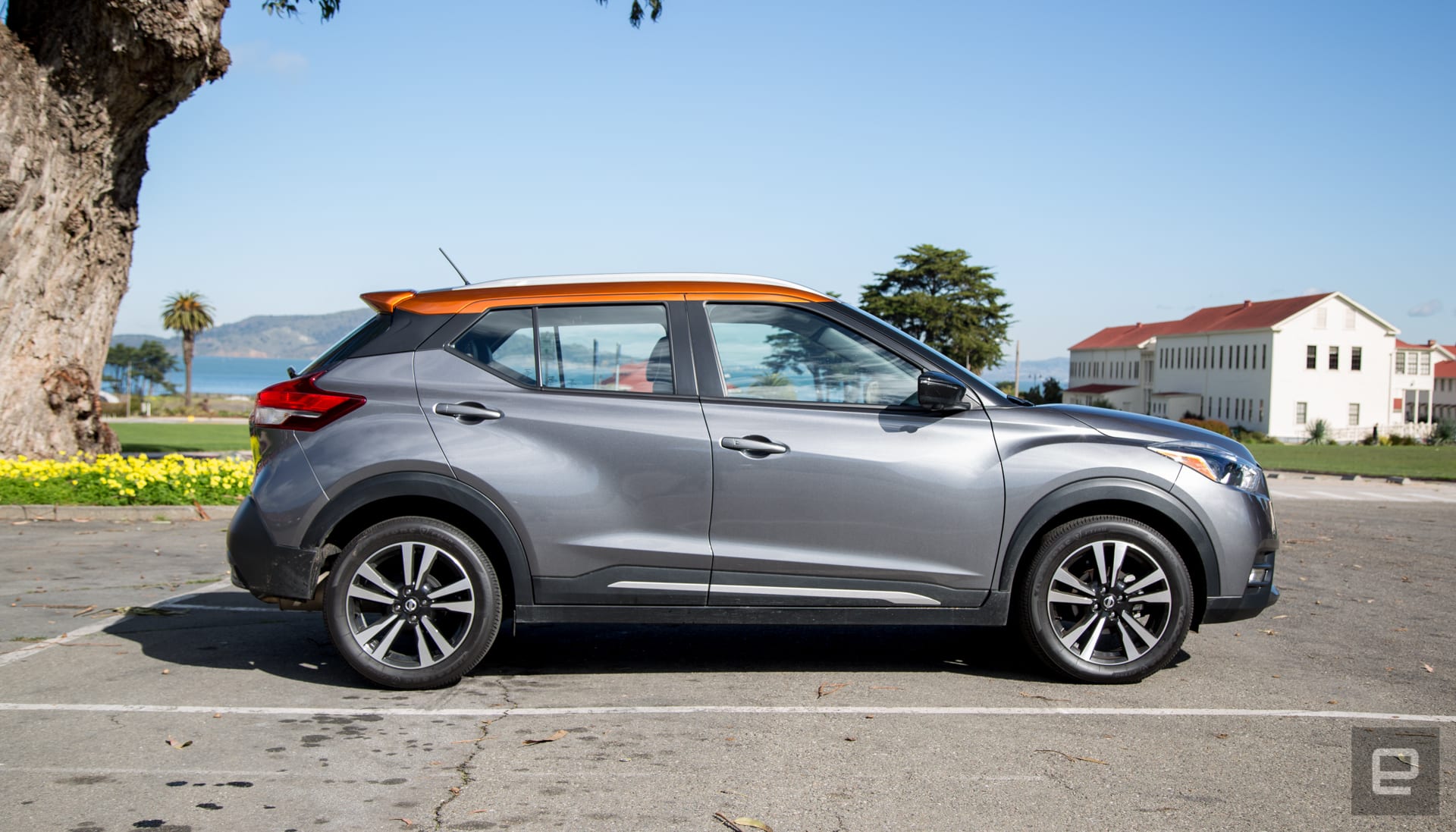 Behind the wheel, the Kicks' 1.6-liter four-cylinder engine produces a paltry 122 horsepower and 114 foot-pounds of torque. This is where you're reminded it's an entry-level vehicle. It'll get up to speed on the highway, but it's going to make a lot of noise while doing it. If it's loaded up with four people and their gear, it's probably best to stay in the right lane while it catches up with traffic.

In the city, the Kicks' small engine is more at home. On streets populated with traffic lights and stop signs, it seems less like a liability and its tight turning circle is great for quick U-turns when you see a parking spot on the other side of the street.

The weird thing is, that while the steering is about as tight as the elastic on a five-year-old pair of underwear, the actual handling on mountain roads is impressive for a car it's size. It stuck to corners better than expected. A hat tip to the Nissan engineers for that surprise.

Sadly, there's no option for an all-wheel-drive (AWD) version of the Kicks. It's front-wheel-drive only so while it looks like it's ready for a trip to the mountains for skiing and snowboarding, you'll have to throw some chains on it during inclement weather. 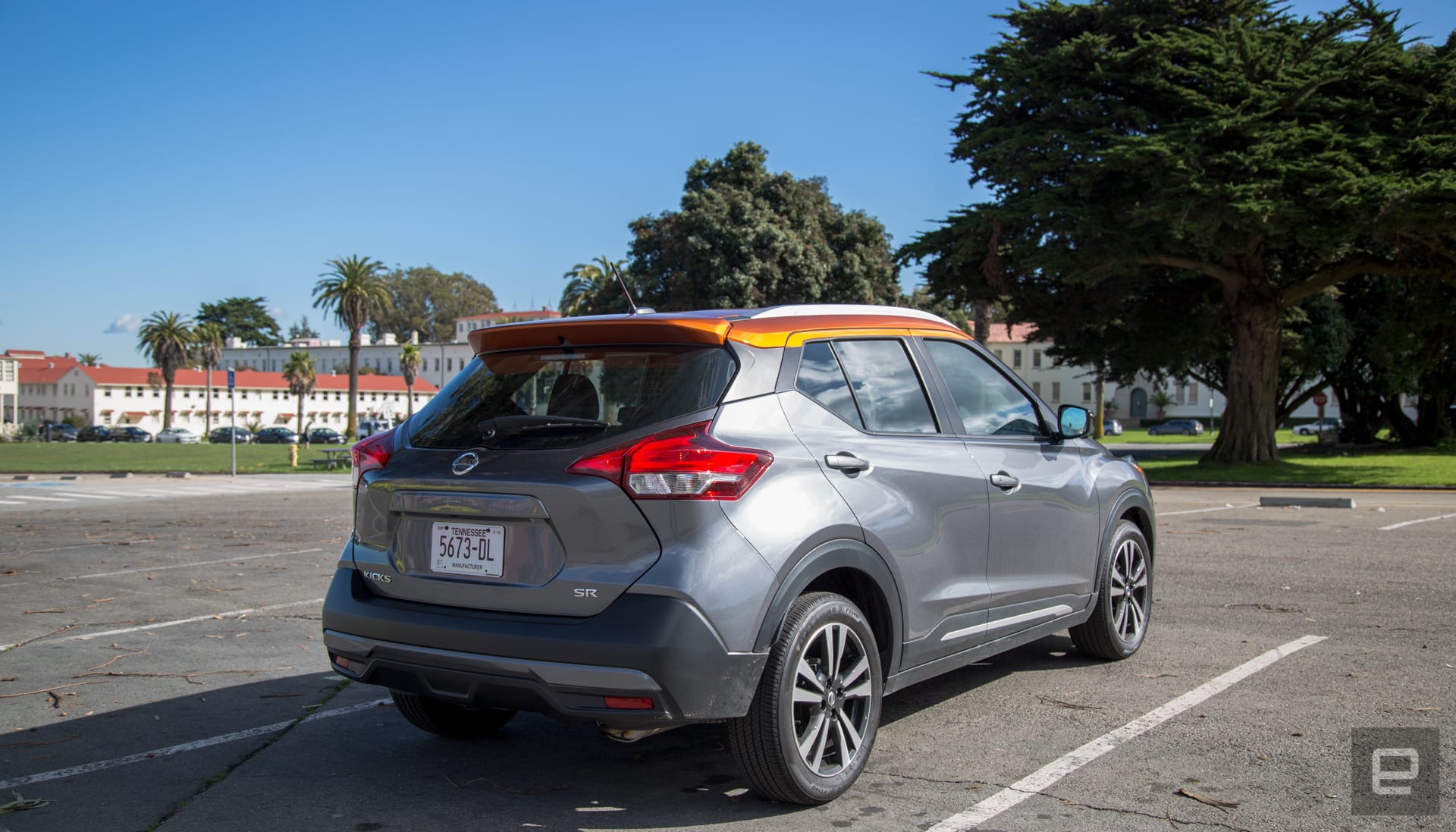 Overall though, the Kicks does an exceptional job hiding its entry-level car roots underneath a veneer of quirky fun. It has a design and tech implementation that's just out there enough to appeal to a young demographic without turning off potentially older drivers. That's if those older drivers are cool with something called "Kicks" appearing on their credit report.