'Tetris 99' hands-on: The battle royale game for everyone else

Imagine: Battle royale but no guns.

Last night, Nintendo dropped an awful lot of things to get excited about if you're a Switch owner. Alongside a Zelda remake, a new game from the makers of Bayonetta, and Super Mario Maker 2, it resurrected Tetris (bigger than Mario, right?) for 2019. The company (and the Tetris experts at Arika) have made it battle royale-style.

In Tetris 99 you compete against 98 other people with time to kill, trading lines with each other as the crowd is whittled down to 50, then 10, then an eventual winner.

Now, if you've ever played two-player Tetris over the last three decades (with a Gameboy cable if you're nasty), the basic premise is the same. The progress you make (and the lines you demolish) negatively affects your rival, piling on the pressure. With Tetris 99, it's not a two-way process. Here, lines get sent from player to player (you'll see a rough outline of your competitors' boards), shaking things up, regardless of your skill level.

This is done through a secondary layer of controls, beside your block shifting buttons. With the left stick, you can shift your attacks to specific -- but anonymous -- Tetris players. More usefully (and less chaotically), there are four shortcuts accessed through the Switch's right stick. These drive your attacks towards either people attacking you, people close to KO (cheap!) or simply random players. You can also hit 'badges' which represent high-level players with KO badges — if you feel like playing aggressively.

KO badges aren't really explained at all, but the bottom line appears to be: you need to kill players to progress into the final throes of the game. So what do KO badges do in Tetris 99?

Fortunately, players on Reddit have unravelled the mystery. Your badges add an attack bonus to your line number, one badge will give you 25 percent more lines to defend or attack with while a fourth badge will double your line attacks. If you kill someone with a badge, then boom, you get their badges.

What this all means is that even high-level players can feel the heat at any time in the game, if any fraction of the 98-player mass suddenly turns on them. And that's the boiled-down delight of any battle royale game for me: player skill is useful, yes, but so is good timing and luck. 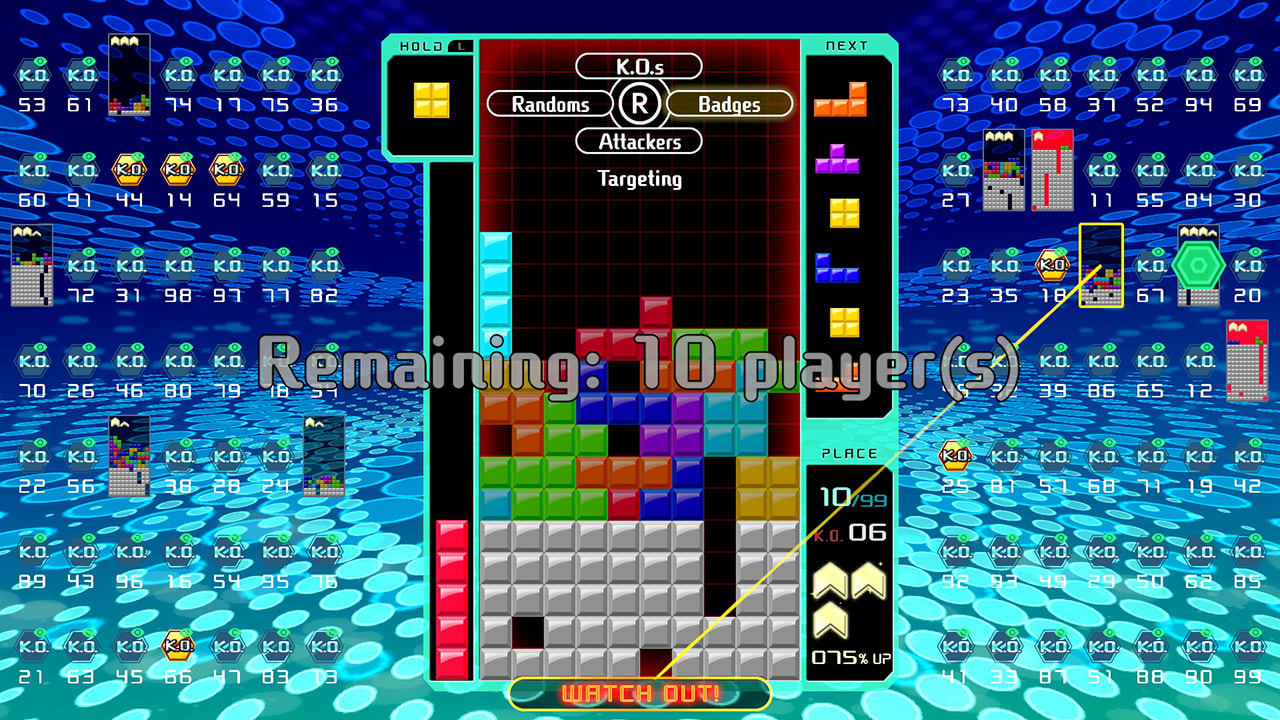 The game is otherwise pretty barebones. There's no single player at all, and the title screen boils down to playing Tetris 99, your play stats (including all those killer T-Spins) and a sparse option menu where you can toggle hard drop (quickly drop tetriminos by pressing up), vibration and change control type.

Last year, the PS4's Tetris Effect took the long-running video game puzzle into VR, but Tetris 99 takes it in a very different direction, amping up the pressure by throwing almost a hundred players into the same infinite, blockbusting struggle. It's more exciting than old Tetris, by several degrees.

Tetris 99 comes free with Nintendo Online (the company's paid-for online service), but for now there are no genuine features aside from online play with 98 strangers. There's no way to book yourself into the same battle royale game as friends, or spot them in the chaos even if both of you are dropped into the same melee. Nintendo promises events and more features are coming, but I'd love to see an easy way to face off against buddies in the midst of Tetris Battle Royale. I didn't think it would work, but it really does. Now, it needs a little bit more sophistication.

All products recommended by Engadget are selected by our editorial team, independent of our parent company. Some of our stories include affiliate links. If you buy something through one of these links, we may earn an affiliate commission. All prices are correct at the time of publishing.
'Tetris 99' hands-on: The battle royale game for everyone else
gadgetry
gadgets
gaming
internet
nintendo
nintendo online
switch
tetris
tetris 99
TL19TETRIS