A closer look at the foldable Huawei Mate X

Making sense of that camera interface, as well as a few other curious traits.

The battle for foldable supremacy is raging on, and Huawei has a strong contender in the Mate X. But just like with Samsung's Galaxy Fold, we haven't been able to actually touch Huawei's bendy handset. Still, we were able to get a closer look at the fascinating flagship today at MWC, as well as get some answers to questions that we've had since first checking out the device. First up -- Huawei told Engadget the Mate X will launch in June.

My favorite part of our demo was checking out how the Mate X's cameras work. To recap, the phone only has a trio of cameras on the grip at the side of the screen -- there isn't a second "front" setup. If you want to shoot a selfie, you'll have to turn the cameras to face you, and the respective screen will come on. I was quite impressed by how quickly the demo Mate X switched between displays. When Huawei's head of global product marketing, Clement Wong, turned the folded phone around in his hands, the display switched between the front and back screens within a second.

I also asked Wong to snap a photo of me from across our meeting room table, and he tapped a button on the top left of the viewfinder to enable me to see myself as I posed for the picture. This part of the software seemed inconsistent during our testing, with my reflection taking up the whole rear screen the first time we tried this. On a subsequent attempt, the viewfinder facing me only appeared on the top half of the panel.

Another thing I really enjoyed was seeing my face spread out across the two screens when the Mate X was unfolded. That's probably mostly due to vanity, but I also like the display here. I did notice a few bumps on the surface, although the crease that we saw during our earlier preview doesn't seem apparent here. Wong said those bumps should be smoothed out by the time the phone launches in June. 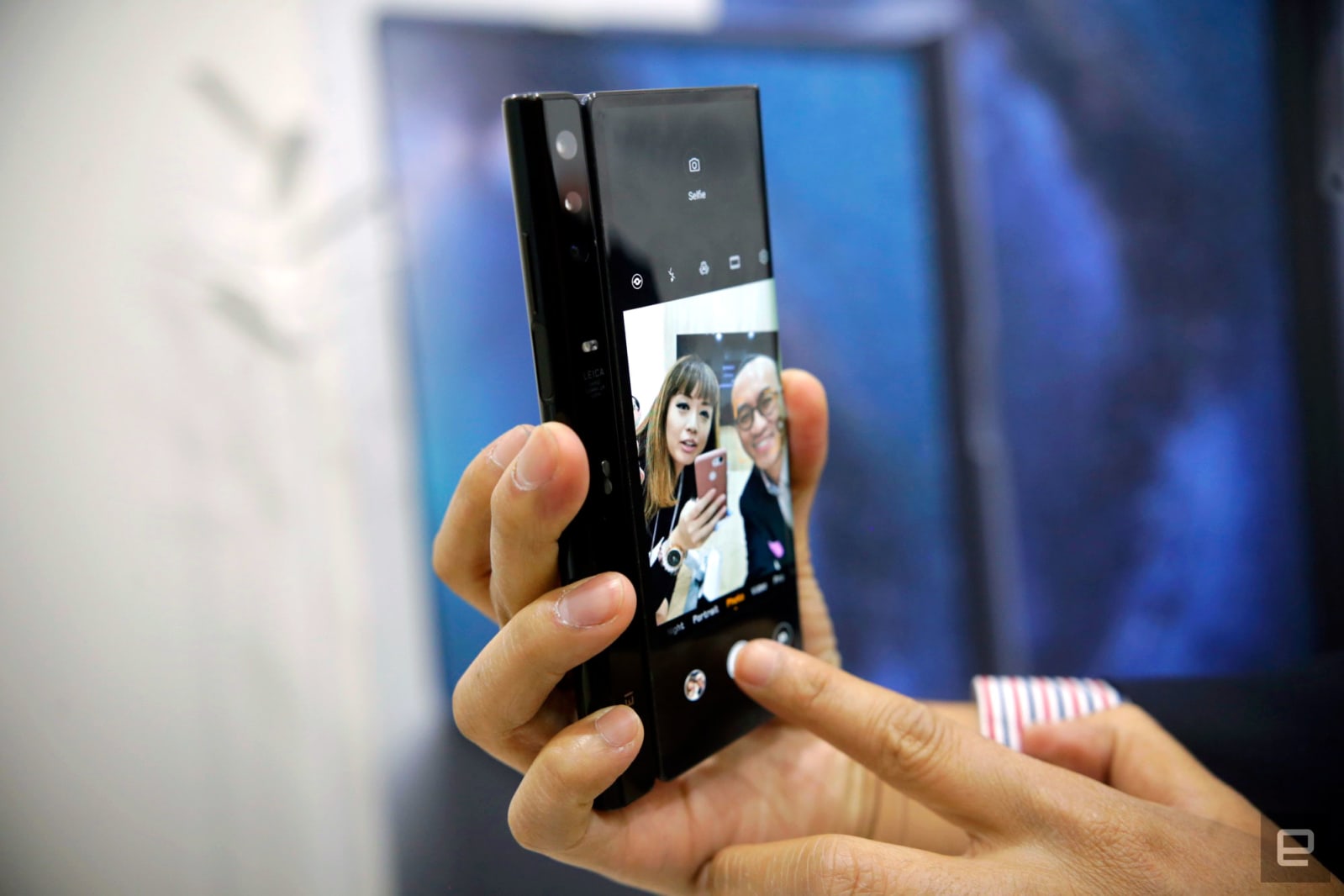 By that time, too, Wong said the Mate X will be tested to meet Huawei's and global durability standards. He didn't specify whether the display will have scratch-resistance or other measures in place to protect it from damage but did say the phone wouldn't be able to use something like Corning's Gorilla Glass as it's new technology. That might mean that Gorilla Glass is too rigid for a folding screen. For those of you who are concerned about spoiling that display since it wraps the outside of the device, there's at least Huawei's custom-made case to protect the rear screen.

If it doesn't break, the display should be a nice canvas for your YouTube binges. We checked out some videos during our demo, and they generally looked pleasant. I wanted to see how multitasking looks on the Mate X, but we weren't able to get apps to launch side by side yet. When unfolded, Wong said the phone switches to a traditional tablet mode that's already in Huawei's MediaPads. It appears the Mate X doesn't use the Android foldables interface that was introduced in November and instead is a refined version of EMUI. Some features of this so far appear to involve the camera button I mentioned earlier for portraits as well as toggling the screens when the phone detects you've flipped it around. 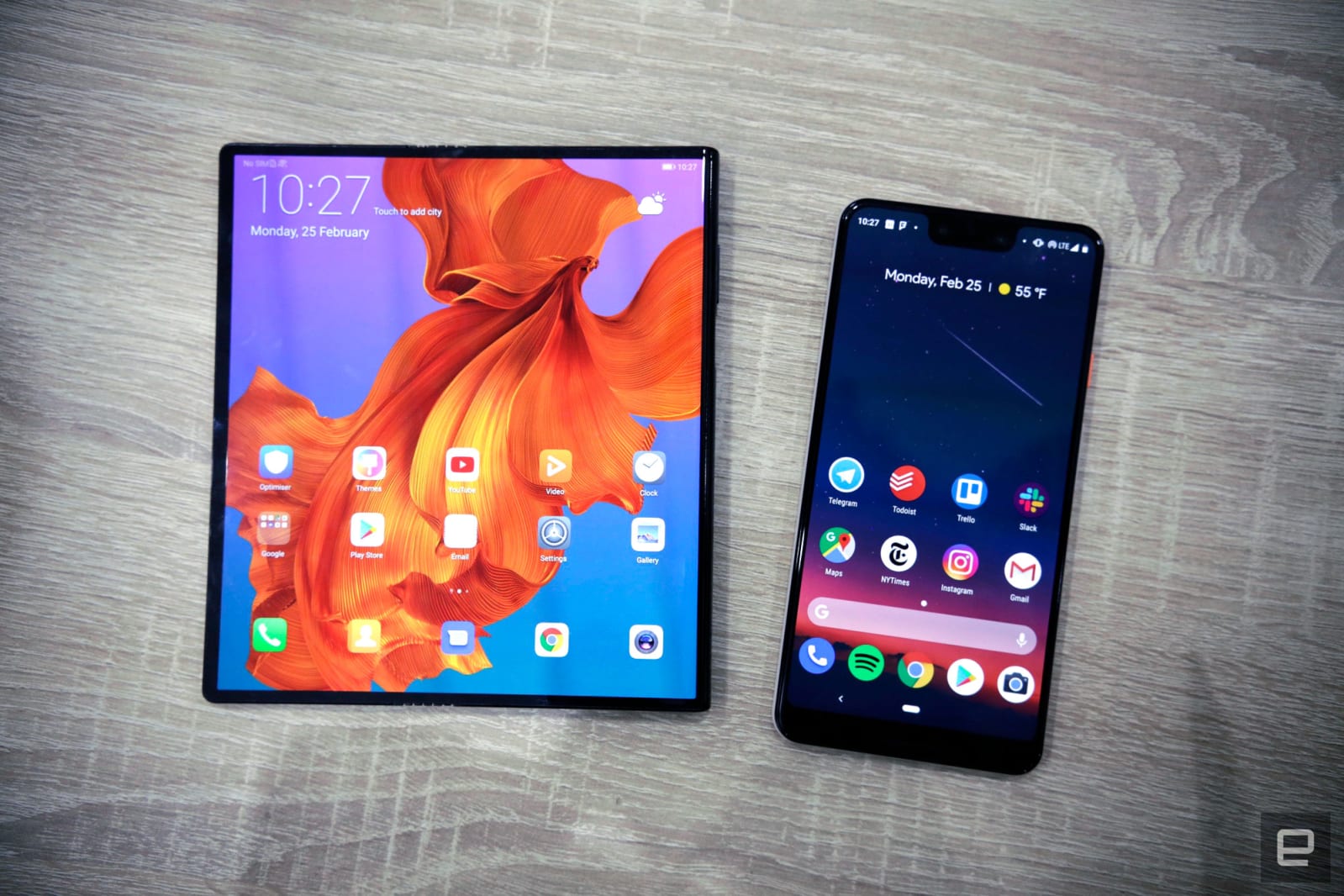 We also have to talk about that cost. At €2,299 to start, the Mate X is pretty prohibitively priced -- who has that kind of money to spend? According to Wong, it'll be early adopters who initially buy the phone. These are people who worship new technology, and for them, it's not just about the folding screen -- it's also about the Balong 5000 5G modem and the promised benefits of millimeter-wave 5G. The Mate X's quad-antennae are all embedded in the grip, by the way, and placed in a way that even if you cover the bar completely with your hands, should still get a signal. Well, according to Wong, anyway.

I have a hard time believing anyone will spend $1,980 for the Galaxy Fold, and even less so about $2,600 for the Mate X. We haven't spent any time at all trying these devices out for ourselves, either, so it's difficult to make any sort of judgement on how well these work and whether they're worth the money. Samsung's phone goes on sale in late April, though, so we should get a better sense of the device by then. Meanwhile, the Mate X is a promising competitor, even at its higher price.