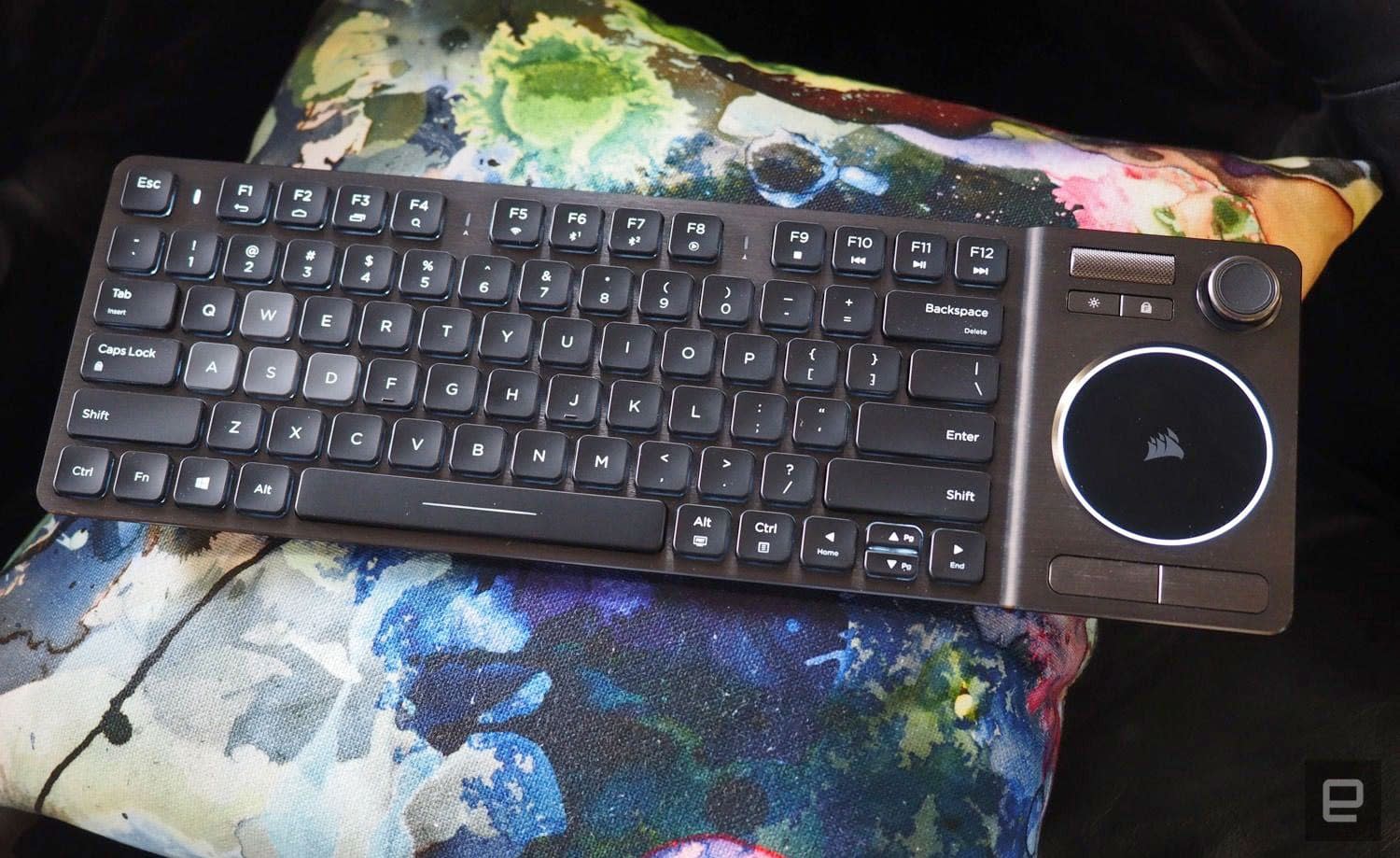 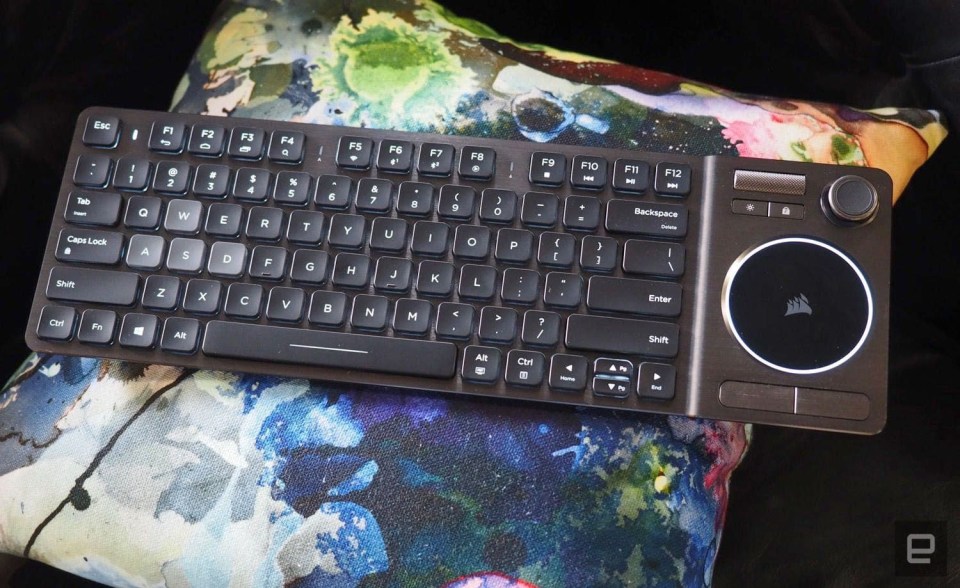 Corsair is in general, a gamer's brand. The company makes PC components like memory and cases, as well as accessories like mice and keyboards for those who want to fully optimize their play experience. But let's be honest, you don't need to be a gamer to appreciate how good these products are. The K70 and K95 RGB are my favorite keyboards to work on, and the HS70 headset is also popular around the Engadget office. So imagine my delight in finding out that Corsair was venturing away from gaming with its latest keyboard. The K83 Wireless Entertainment Keyboard is aimed at folks who need a good media controller for their smart TV, HTPC or Roku. The K83 is definitely a change of pace for Corsair — at first glance it's a lot smaller in profile than the company's other decks. It's flat, with rounded edges and decked out with chiclet keys. There are no feet or anything underneath so you definitely won't be using this on your desk — it's built for your lap. At the right is a trackpad, which is pretty standard for a media keyboard, and a thumb stick, which is not. The thumb stick, in some cases, is easier to manipulate when you're curled up on a couch, letting you grip the K83 like a giant gamepad. To complete that gaming controller feel there's a shoulder button on the top of the keyboard's right side labelled 'R' and a trigger on the back labelled 'L' despite also being on the right. Confusing? Maybe a little.

The K83 connects either via a 2.4 GHz dongle or via Bluetooth. I opted for the former when connecting the keyboard to my LG set. It didn't require any set up, though it did seem to be a bit sluggish in responding at times. I would hit a key on the K83 and the TV wouldn't react immediately. Other attempts went a lot smoother. For the past few days it's been a lot quicker on the uptake, but it's still a bit unpredictable to the point of being frustrating. 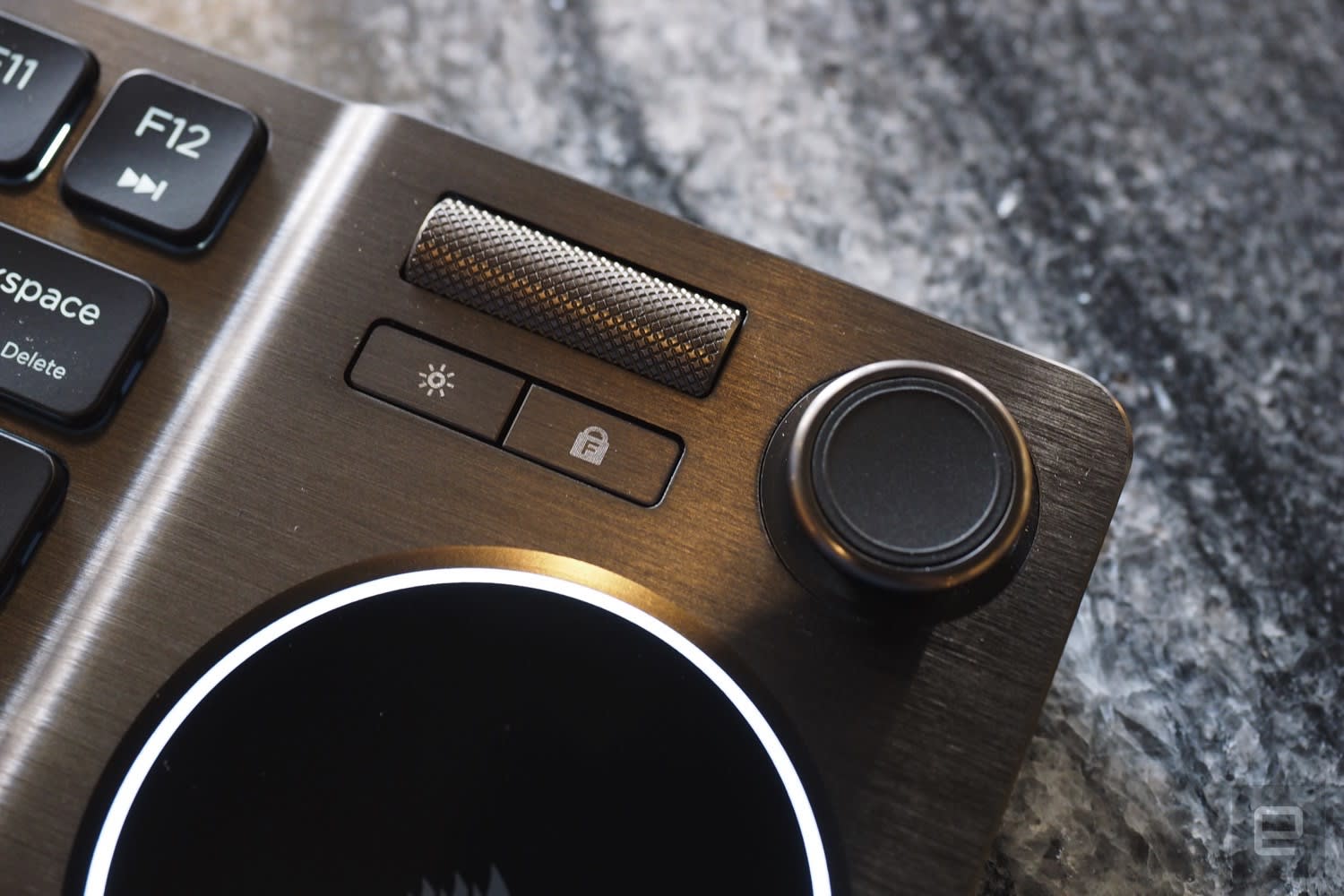 The controls are fairly simple. I can tab through menus with the arrow keys and hit enter to select something. The touchpad and the thumbstick direct a large teardrop cursor on the screen that I can use to select options. The volume roller was pretty great as well; a big step up from mashing a button.

However, beyond those basic controls it was pretty wonky as a remote control. The function keys double as the media keys, and include standard commands like play, rewind and home, except... they didn't actually perform those. Instead, entire blocks of unrelated keys — specially, F1 through F4 and then F5 through F8 — did those actions instead. And none of them opened a 'home' menu; only the 'L' trigger seems to do anything similar to that, and it doesn't even activate the WebOS home menu; rather, it gives me my TV's settings. 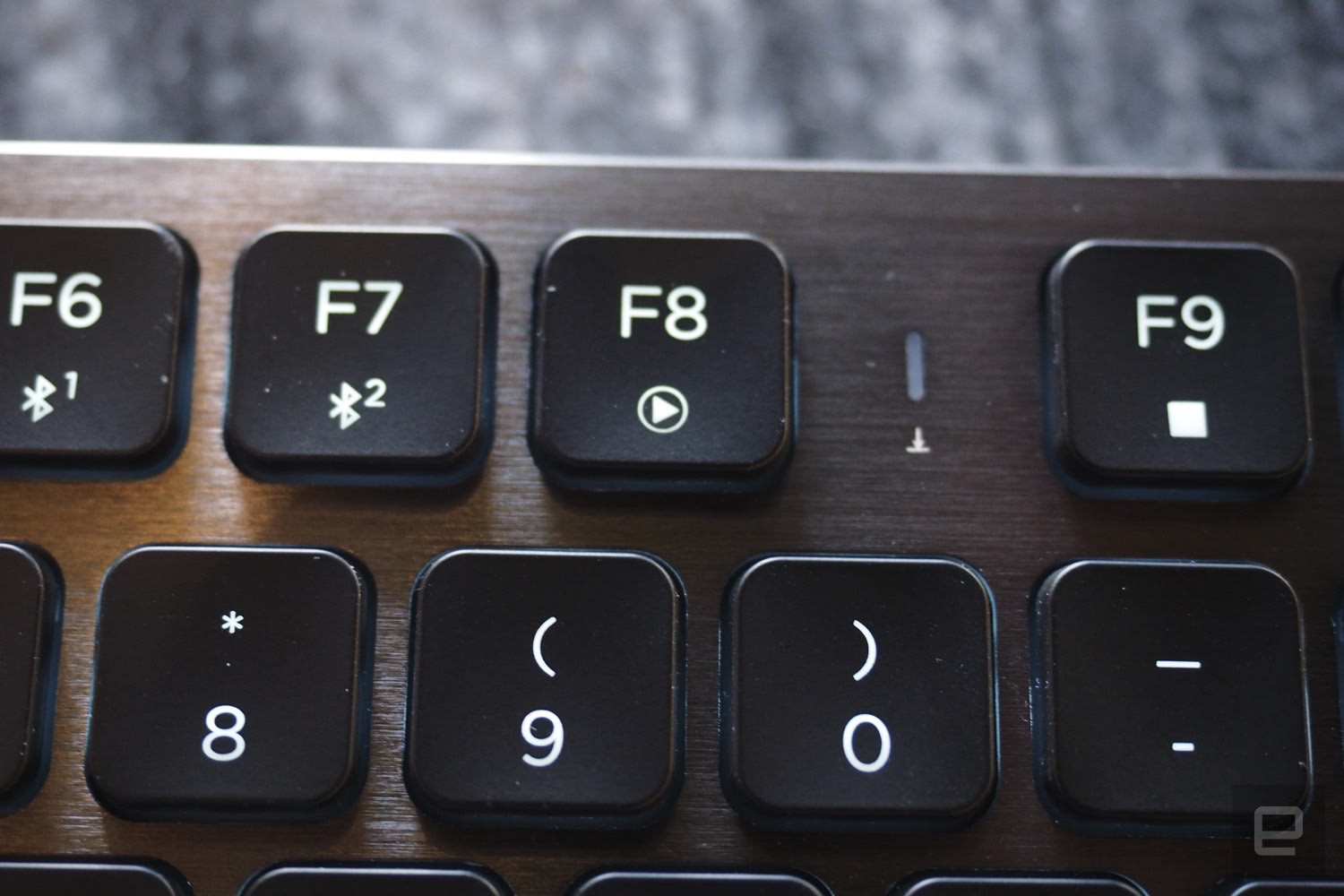 It's pretty baffling. But maybe I don't really need to get too fancy with the keyboard; after all, I just need something a little easier to make choices with than my remote. It's still more pleasant for browsing menus, and I love the roller and thumbstick controls. And it's got actual letter and number keys, which should make searching for stuff on YouTube and Netflix easier. Right?

Well, the alphanumeric keys don't work on my TV. Move along.

On the premise that the fault was with my TV and not the keyboard itself, I fired up my PlayStation 4 and attempted to connect to the K83 via Bluetooth. It's super easy to pair, and equally simple to jump between connected devices: It just takes a push of a Function key. The PS4 detected the keyboard promptly, only to also tell me it wasn't compatible.

The K83 should work with most smart TVs, Roku players, Windows PCs and Android devices. I don't have a Roku or other media player (it's redundant given the smart TV). I did connect to a Windows 10 laptop and it worked splendidly, so if you have a home theater or other media PC setup, the keyboard should do the job just fine. 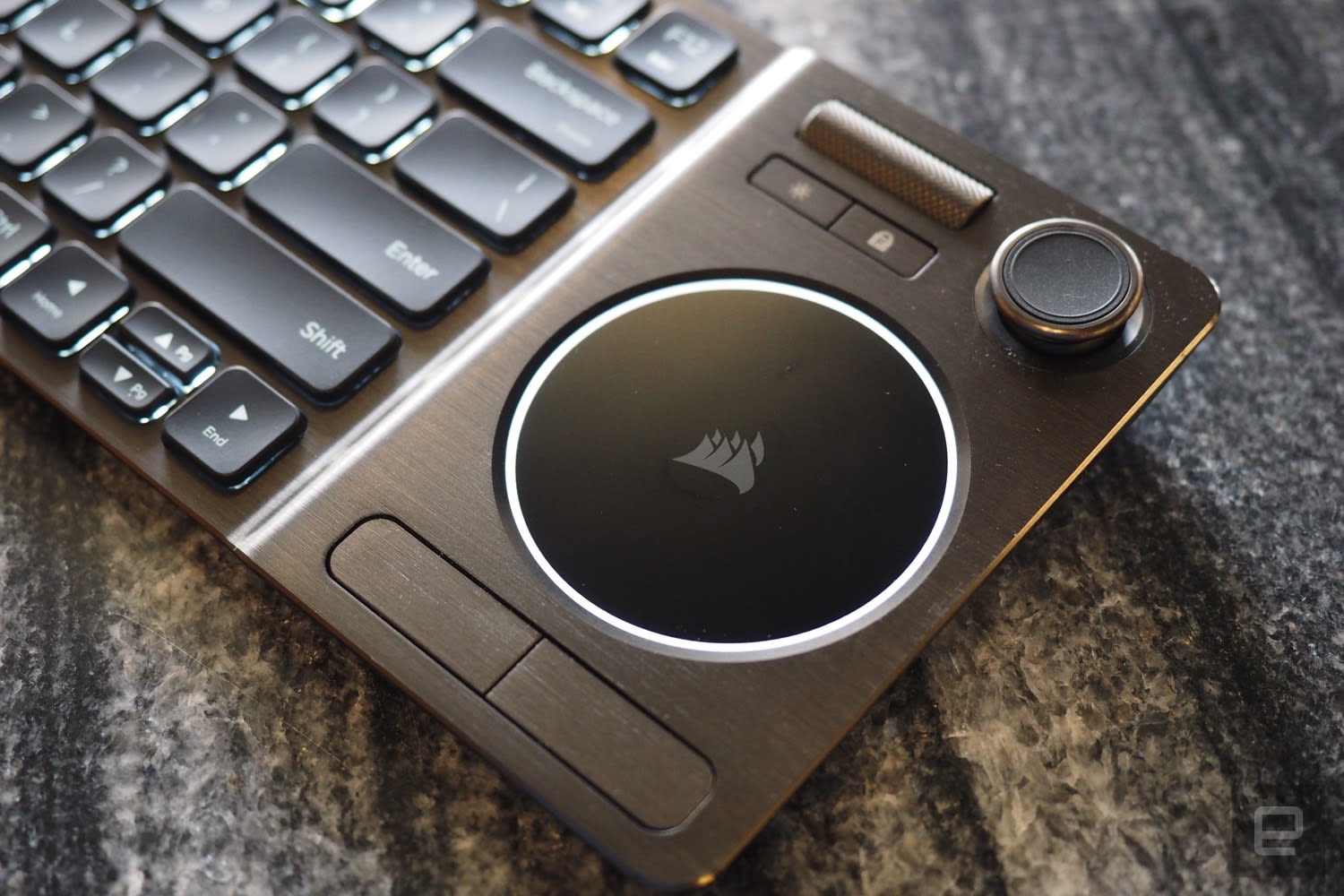 Connecting to a PC at least lets you access the iCUE software, where you can set up macros and otherwise customize the K83. The customization options aren't extensive. It's not an RGB keyboard, so you won't get an array of rainbow colors and patterns to bling out your deck. Your choices are white, gray, darker gray and... black, aka "not actually lit up." I stuck with white because it looked the best, but if you want to create a dark movie theater-like environment, something less bright might be more your style.

And this thing is loaded with style. It's the best looking media keyboard I've ever seen. The bottom is plastic but the top plate is brushed aluminum, just like Corsair's gaming-dedicated decks. The keys, though not mechanical, are smooth and feel springy. It's a pleasure to type on. The trackpad and thumb stick are top notch. I even love the weirdo 'L' trigger on the back. At $100 it's a steep price compared to devices like Microsoft's $40 All-in-One Media Keyboard or Logitech's $70 K600. However, if Corsair manages to iron out its basic functionality and get it working with more media boxes (game consoles, at least) it'll be worth the extra cash just for some of that Corsair elegance in your living room.

Update: Corsair contacted me to note that it "doesn't support LG TV at this time" and "we're working to support addition devices which will enable special functions and a smoother experience."

In this article: av, corsair, corsair k83, gaming, gear, hands-on, home, k83, keyboard, media keyboard
All products recommended by Engadget are selected by our editorial team, independent of our parent company. Some of our stories include affiliate links. If you buy something through one of these links, we may earn an affiliate commission.