HP's 'Reverb' is the sharpest Windows VR headset yet

HP is ready to outdo the HTC Vive Pro and Samsung Odyssey with its latest VR headset, the Reverb. Confirming a February leak, it features an astoundingly sharp resolution of 2,160 by 2,160 pixels per eye, while those other headsets have around half as much. It's sometimes tough to see the benefits of more pixels on monitors and TVs, but VR headsets are another story, since your eyes are practically right up against the displays. That's something commercial customers will likely appreciate, since it makes things like workplace simulators even more realistic.

Unfortunately, you'll have to pay extra to get HP's latest tech: the consumer version of the Reverb will cost $599 -- $150 more than the last model -- when it lands in late April. There's also a $649 professional version coming, which will include a shorter cable to work with HP's Compact Desktop backpack, as well as washable face cushions.

From the front, the Reverb looks more like the Oculus Rift than HP's previous headset. But around the back, there's a unique circular headstrap system, instead of the single "halo" style headband from before. It's joined with velcro straps around the sides and top of the headset, another nod to the Rift. While it might seem like a step back at first, HP representatives tell us this new mechanism makes it easier for the Reverb to fit on a variety of head sizes. It's also much lighter than before, as well, clocking in at 1.1 pounds compared to 1.8. 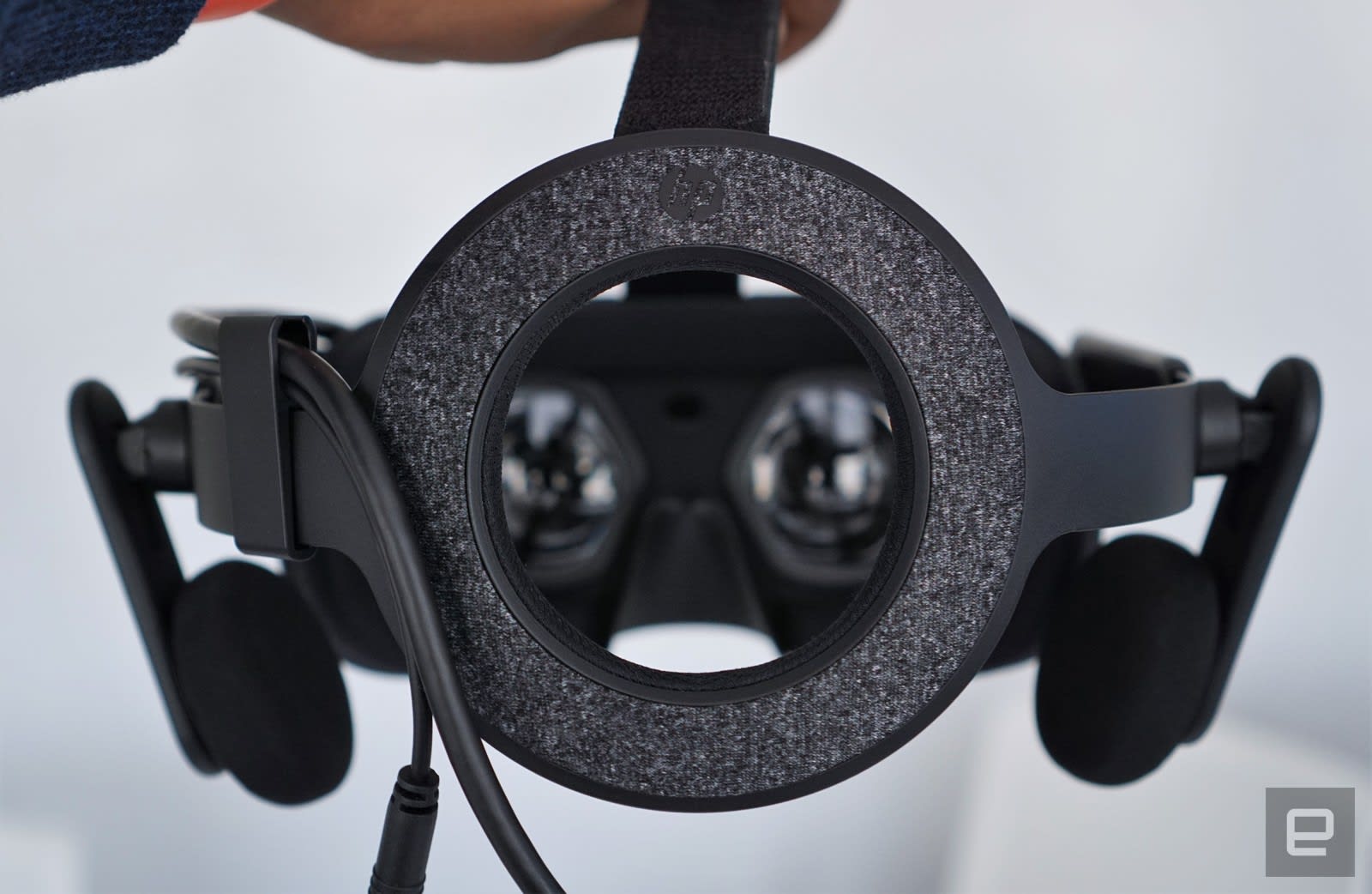 HP also made some major changes, this time around. Instead of OLED displays, it's using fast-switching 2.89-inch LCDs running at 90Hz. Previously, high-end headsets only used OLED to avoid the head-ache inducing screendoor effect, but HP says LCD technology has come a long way since then. It's also tough to secure OLED supply these days, since it's showing up in more devices. The Oculus Go also used speedy LCDs, but it's surprising to see that tech make its way to something more professional. the Reverb's new lenses are also aspherical, instead of just circular, which gives them a larger 114-degree field of view.

During a brief demo of the Reverb, I was mostly concerned with how comfortable it would feel. I had no trouble slipping it over my large glasses, and as I did so, the circular strap nestled into a spot on the back of my head. I didn't need to rearrange any of the velcro strap to tweak the fit -- it just felt rock solid as I moved my head around. The built-in headphones, which are also new, easily rested on my ears.

Once I had the fit sorted, I booted into the Windows Mixed Reality Portal (which is really just a virtual living room in a trendy cliffside house), and ogled everything for a few minutes. Nearby objects looked noticeably sharper than the last headset, and I could also make out more detail in the distant mountains. I was also surprised how much better it looked than the Samsung Odyssey, which was the highest resolution Mixed Reality headset up until now.

As I hopped across several other VR experiences -- an architectural rendering of an upcoming WeWork location, a surgery simulator and a OSHA training session set in a warehouse -- everything looked smooth and clear. We're not at the point where VR can actually look life-like, but the Reverb is definitely a big step towards that goal. Unfortunately, HP stuck with its basic Mixed Reality controllers with this headset. They're fine, but not nearly as ergonomic as Samsung's Odyssey controllers.

Aside from the resolution bump, HP's Reverb doesn't exactly break new ground, but it looks like a solid option for anyone who needs the sharpest VR possible. It makes sense why HP is betting so much on commercial users, though -- consumer VR is still waiting for that killer app that would give more people a reason to buy a headset and a beefy computer.