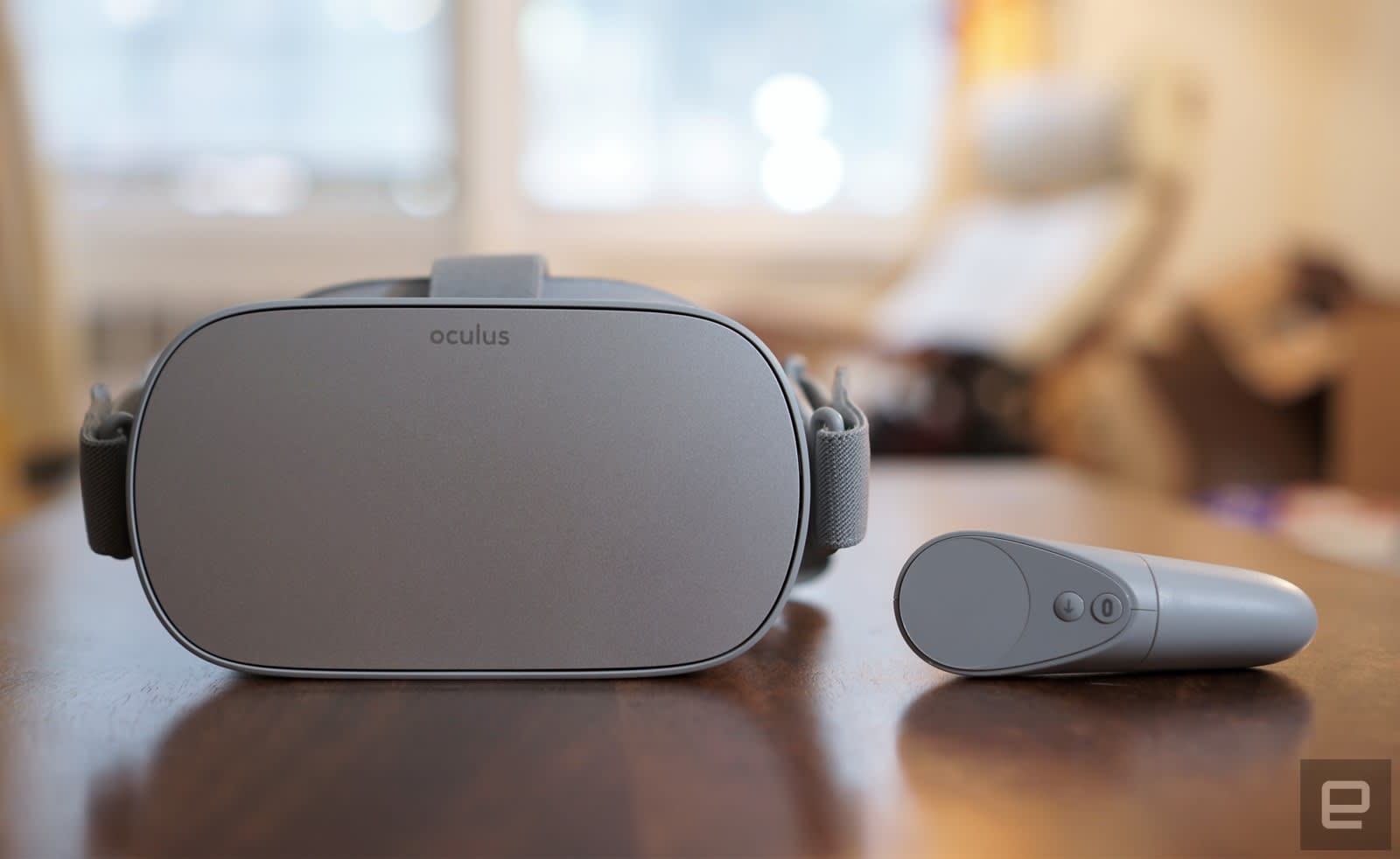 Oculus Go review: Finally, cheap and easy VR for everyone

The Oculus Go is the most convenient and comfortable VR headset ever made. That might sound like hyperbole, but it's well deserved. With the Rift, its first headset to reach consumers, Oculus helped introduce us to high-end VR. And together with Samsung, it delivered the cheap Gear VR headset for smartphones. But the $199 Go has a far better chance of getting average consumers into virtual reality, because it's dead simple to use. 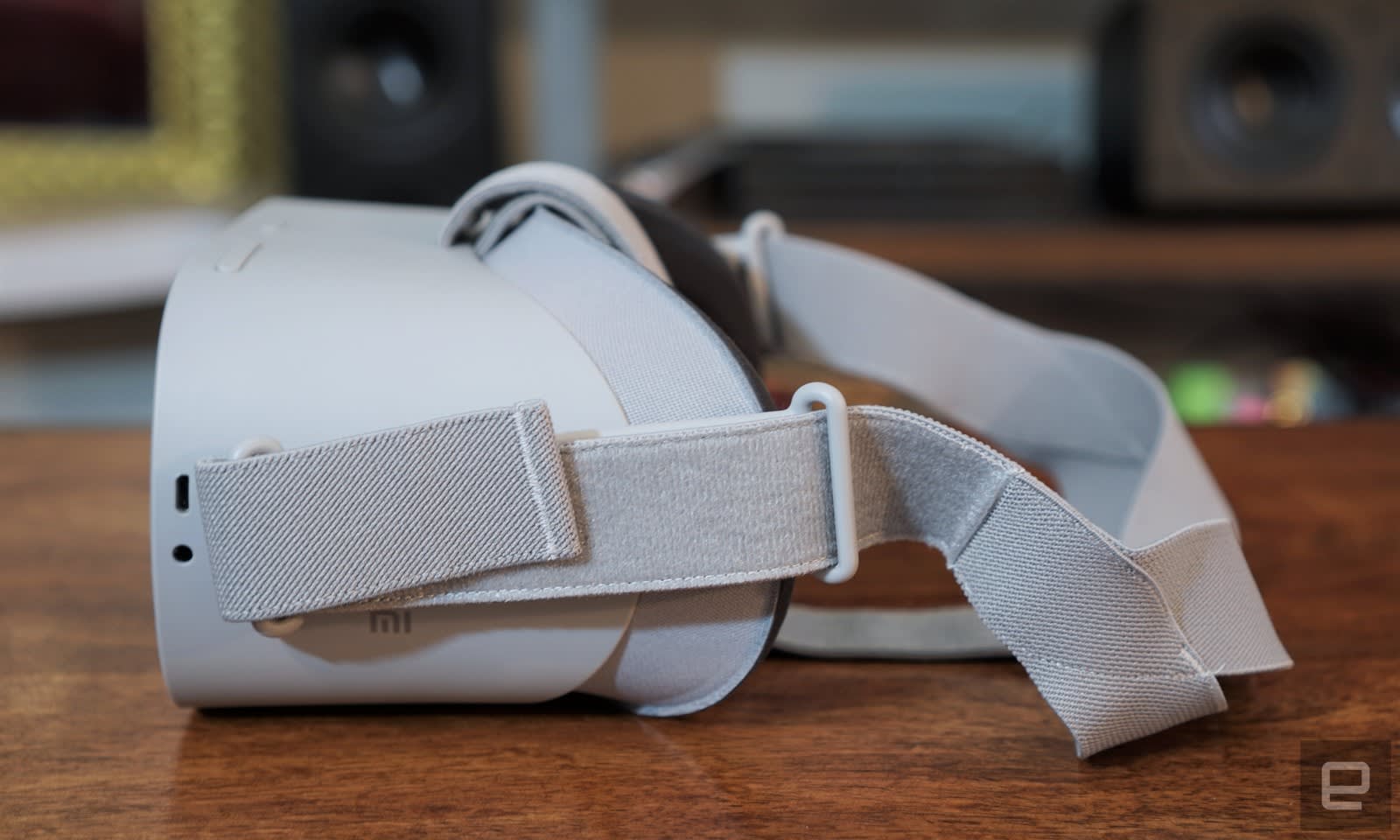 You can think of the Oculus Go as a self-contained version of the Gear VR. They both have large plastic shells that house their lenses and hardware, but the Go is a huge step forward when it comes to comfort and ergonomics. The faceplate material has a generous amount of foam and is covered in knit mesh. It reminds me of what you'd find in athletic clothes, and it serves a similar purpose: wicking away sweat. (There's one thing you'll learn quickly when you spend time in VR: Your face will get real sweaty.) The Go's three head straps are made of spandex and secured with Velcro. That makes them easy to adjust and stretch over even the biggest of heads.

Since it's not housing a whole smartphone, the Go is surprisingly lightweight, at just over a pound. That's a bit less than the Gear VR with a Galaxy S9 attached. Under the hood, it has the same hardware you'd expect from a mid-range smartphone, including a two-year-old Snapdragon 821 processor and either 32GB or 64GB of storage. It also features a 2,560-by-1,440 fast-switching LCD screen, instead of an OLED panel, which is kind of surprising. OLED has pretty much become the standard in every VR headset, due to its responsiveness, but Oculus claims that this LCD technology is similarly speedy. And, of course, it helps keep costs down. 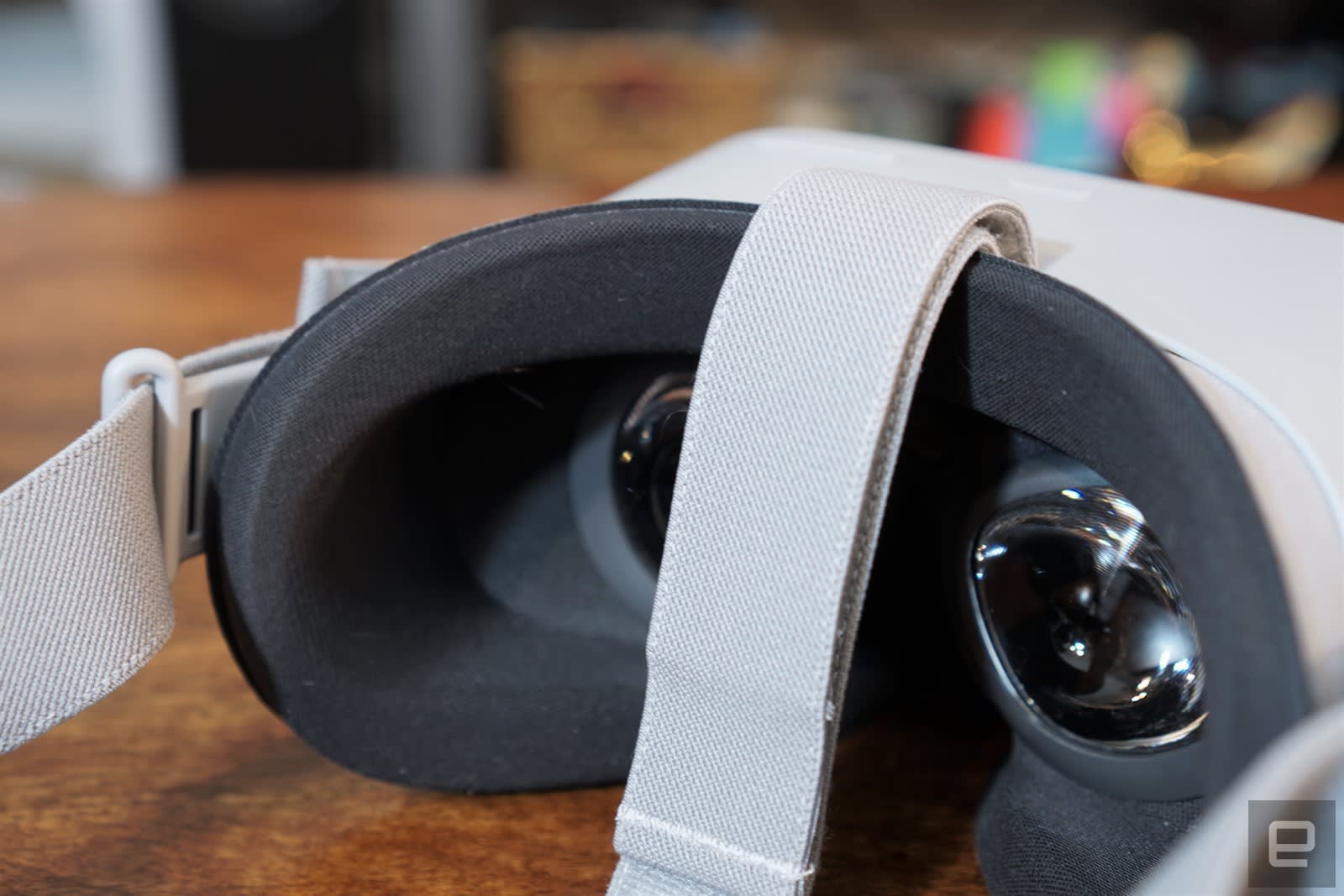 The speakers built into the headset are amplified by the contours of the faceplate. They're surprisingly loud and clear, but don't mistake them for headphones -- everyone around you will hear what you're playing. If you want some privacy, you'll still have to plug in headphones.

Like the Gear VR, the Go supports three degrees of freedom, meaning it can track your head movements. It can't monitor your position in space, like higher-end VR offerings, which offer six degrees of freedom tracking. You'll have to wait for the Oculus Santa Cruz to get that feature in a wireless and self-contained headset, and there's no word yet on when that'll arrive.

The Go feels sturdy overall. Credit for that goes to both Oculus and its manufacturing partner Xiaomi, a company that's made a name for itself by building reasonably priced hardware that feels more expensive. You'll still want to use some sort of case if you're traveling with it, though. Those screens are just too delicate to leave exposed. And, unlike with a smartphone, you can't really use a VR headset with a cracked display. 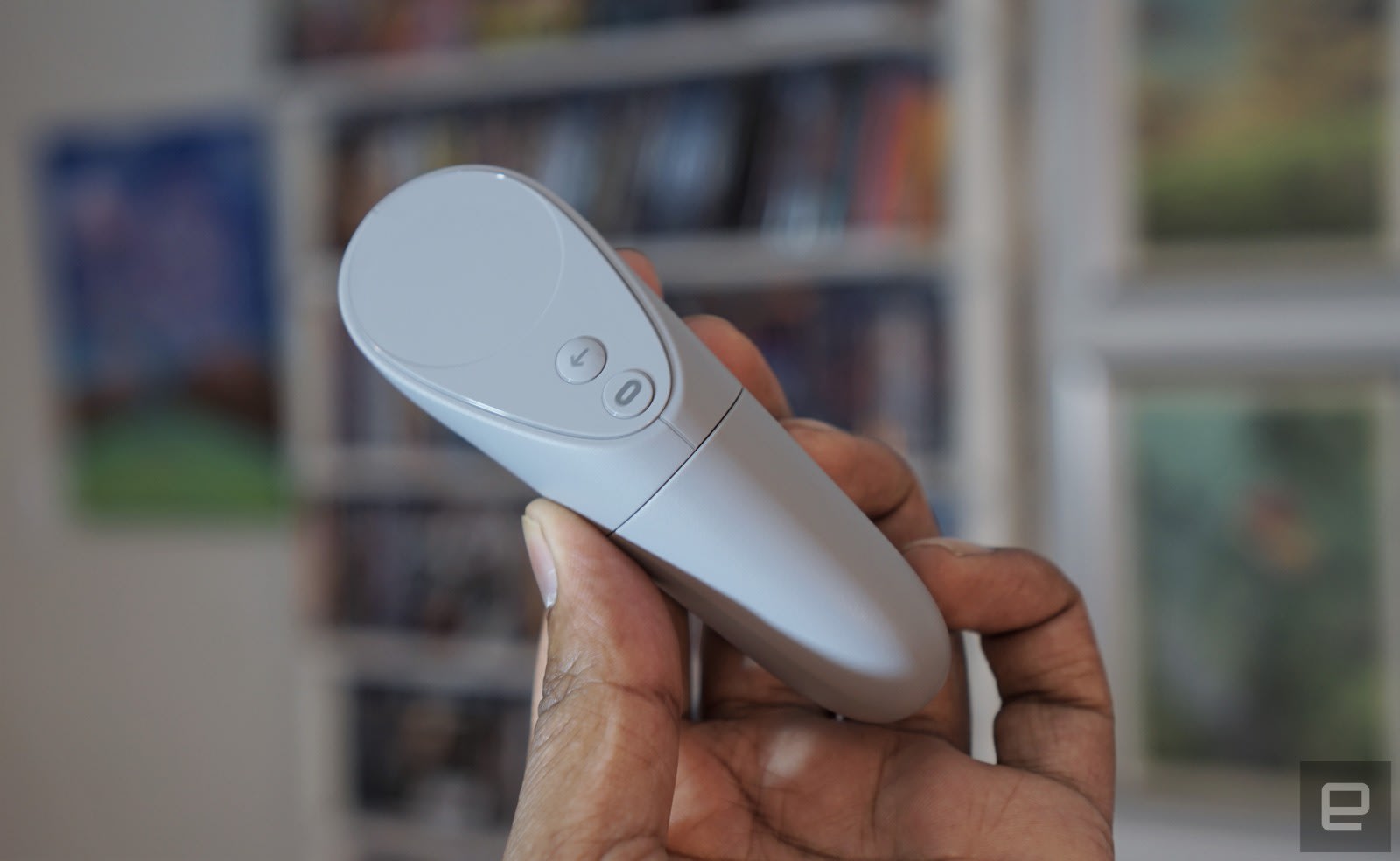 The included motion controller feels like an evolution of the Gear VR's -- it's light and fits into the contours of your hand. There's a trackpad on the top, which doubles as a button, as well as back and home buttons below. Your index finger sits on a trigger, something that's an essential feature for interacting with VR environments. 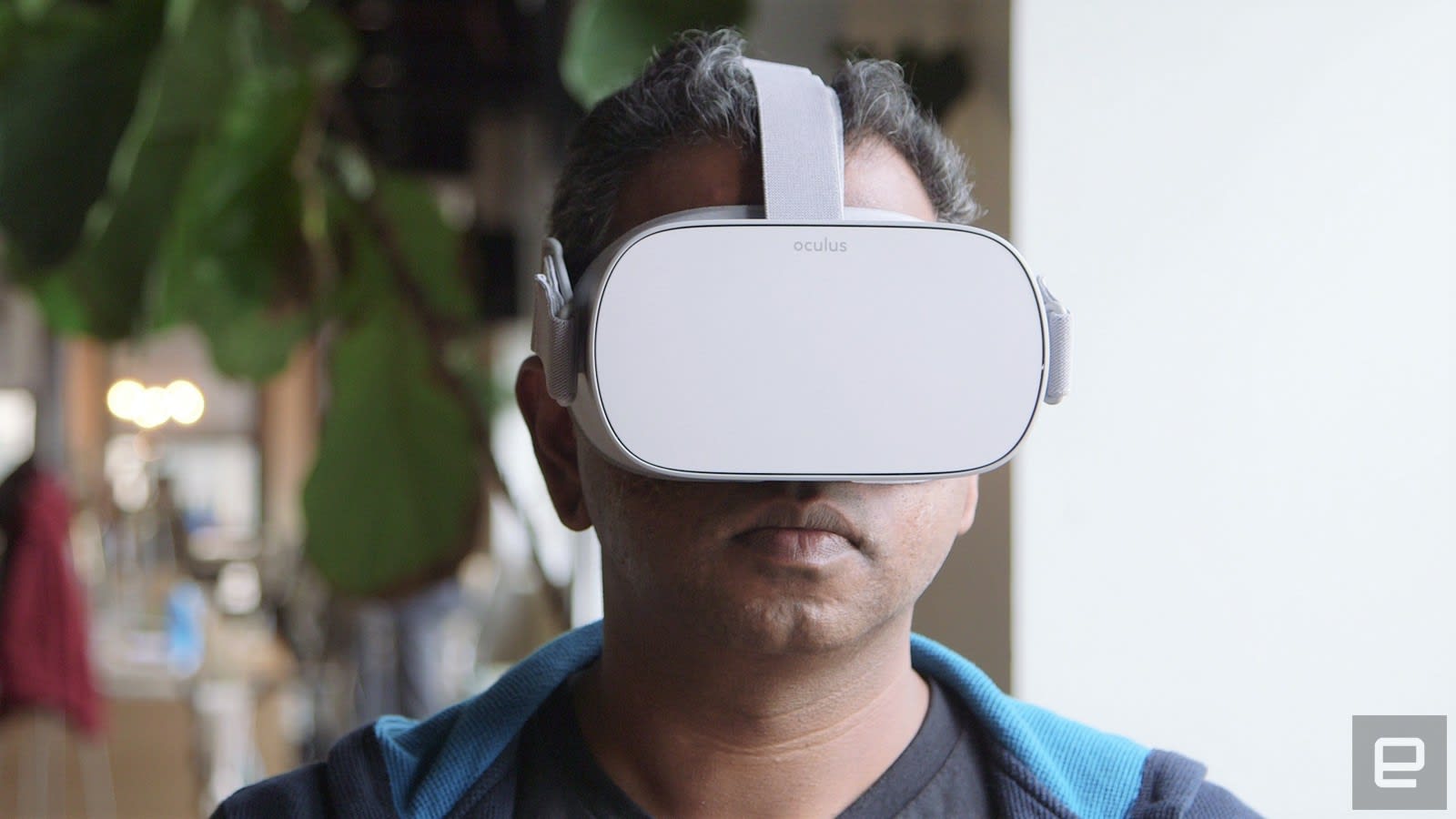 Before using the Oculus Go, you'll have to pair it with an iOS or Android companion app to connect it to WiFi. It also serves as an easy way to manage your headset's software library. You can always browse the Oculus Store in VR and download apps directly, but the app is helpful when your headset is out of juice.

As a VR veteran, I didn't have much trouble putting on the Go. It easily fit over my glasses, and I was able to readjust the head straps in a few seconds. Even people new to VR were able to quickly find a good fit. There's also a glasses spacer in the box, which will help if you have very large frames. Oculus says you'll eventually be able to order prescription lenses that sit atop the Go's displays. That's convenient, but it'll make sharing your headset with friends a bit tougher.

From the get-go, I noticed that everything looked a bit sharper compared with the Rift. That made me curious about what streaming video would look like on the Go, so I headed over to the Netflix app to check out a few shows. Before I knew it, I had watched more than an hour of Chef's Table. I've tried watching video in VR before, but it was always a bit too cumbersome, since it had to be tethered to my computer or I would risk draining my phone's battery. The Go has none of those issues. Sure, you still have to worry about charging it, but it's not as if you'll be cut off from the world if you use up the battery. It also helps that it simply feels great to wear. The faceplate never felt like it was pushing too hard against my face, and it did an admirable job of minimizing face sweat. I appreciated that I didn't have to worry about putting on headphones -- I was alone in my office, so I could just sit back and enjoy. After my Netflix binge, I hopped into the Within app and checked out some 3D 360-degree videos, like This Is Climate Change. That docuseries already looks fantastic on the Rift and Gear VR, so I wasn't too surprised that it was still sharp and immersive on the Go.

As for games, I had a blast with Racket Fury: Table Tennis, which made great use of the motion controller. I was surprised to find that it recognized fine movements for different types of swings. While it's no replacement for actual table tennis, it's a solid example of what's possible with the Go, even if it's limited to mobile hardware. Similarly, CloudLands: VR Minigolf played smoothly with the controller. Just be prepared to look a bit silly while putting and swinging.

I also briefly tried out Oculus Rooms, which lets you hang out with friends in VR and play a few games or watch some movies. It's ideal if you have friends who live far away -- being able to chat together while watching the latest Netflix show in a virtual space seems like a fun way to stay connected. Rooms got a major redesign for the Go, with a more elaborate living area, higher-quality avatars and games from Hasbro. It's getting Boggle this month, with Monopoly and Trivial Pursuit to follow later. 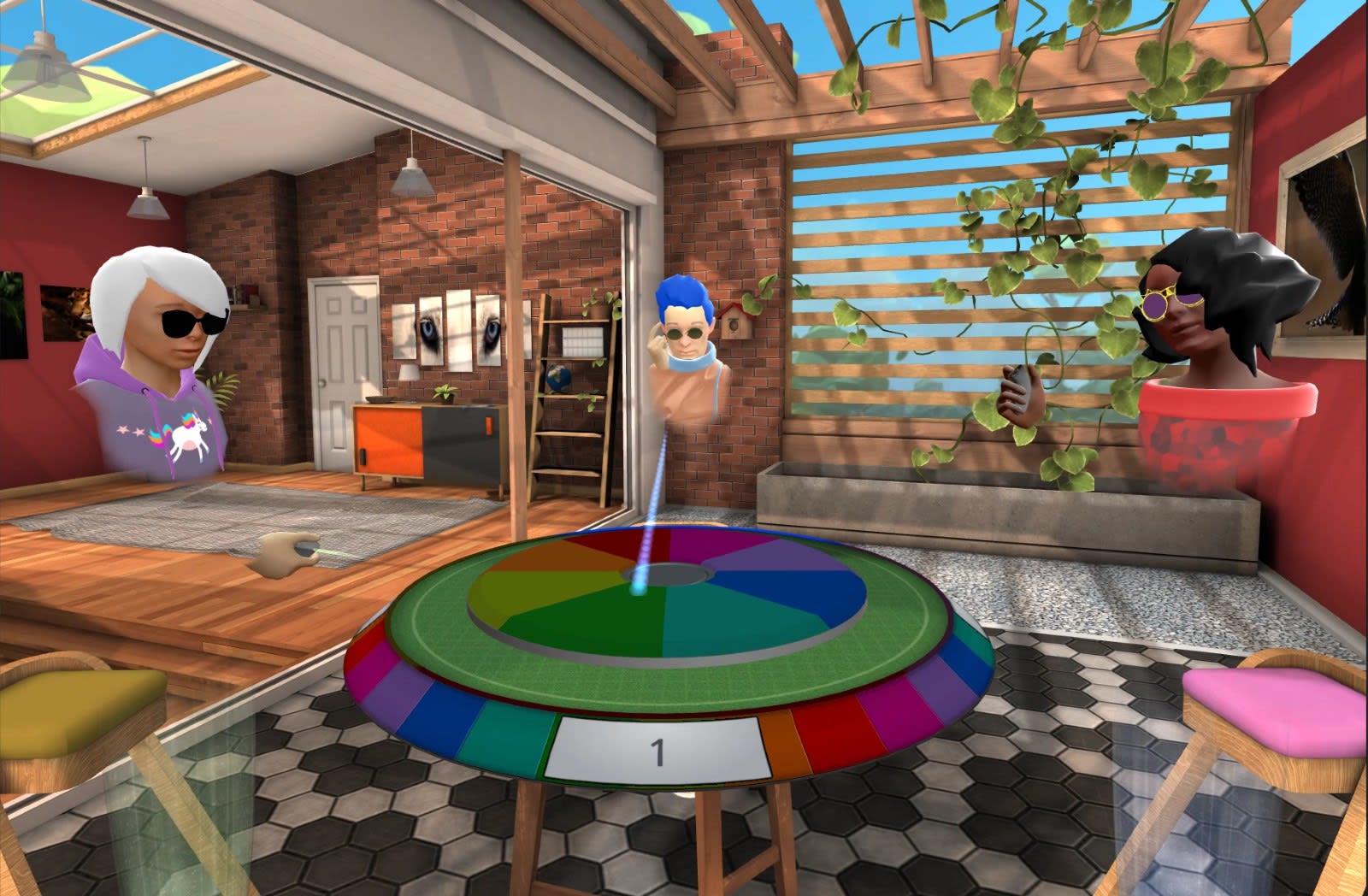 For the most part, what struck me about the Oculus Go was how easy it was to use. I didn't have to worry about mounting my phone, as with the Gear, or getting my desktop primed for a VR session. It simply sat on my coffee table, always ready for action. That simplicity also made it something my friends and colleagues wanted to use. And because it was so comfortable, I also found myself using it far longer than most other headsets. It's perfect for lounging in bed or on the couch. (Just a PSA, though: You can't use most apps while lying down flat. That's something Gear VR owners have been asking about for years.)

While you're still a bit removed from the real world while wearing the Go, I appreciated being able to quickly lift it up to check my phone's notifications. That's much harder with the Gear VR, since it would mean completely removing your phone and exiting your VR apps.

Oculus claims that the Go will get 2.5 hours of battery life while you're watching video, and a little over two hours while playing games. During my testing, which usually involved a mixture of those activities, the Go typically lasted around two hours and 15 minutes. In comparison, the 2017 Gear VR crapped out at under two hours and leaves you phoneless. You might be tempted to just keep the Go plugged in and charging if you're using it in bed or on the couch, but Oculus reps strongly discouraged that. That's partially because the charging cable connects awkwardly on the headset's side. 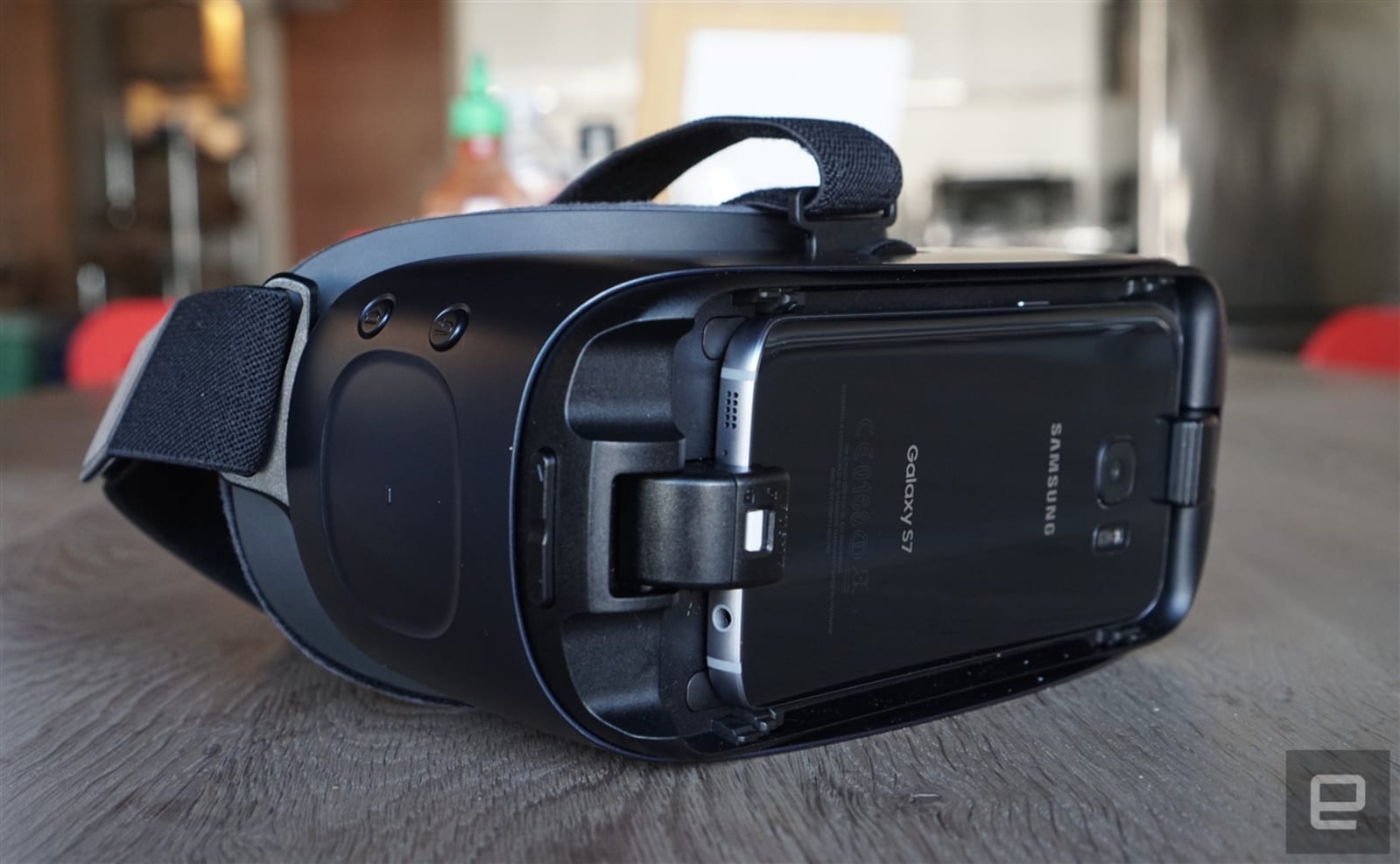 At $199, the Oculus Go is the easiest way to jump into VR for most people. If you're looking for more storage, there's also a 64GB model for $249. Sure, you can get a Gear VR or Google Daydream headset for less than $100, but they work only if you have a compatible phone. Lenovo also has a standalone Daydream headset coming soon, the Mirage Solo. That one's more powerful than the Go, and it comes with 64GB of storage. But it's also much more expensive, at $400. And while Google has done a decent job of getting apps on its VR platform, you have many more options with Oculus. 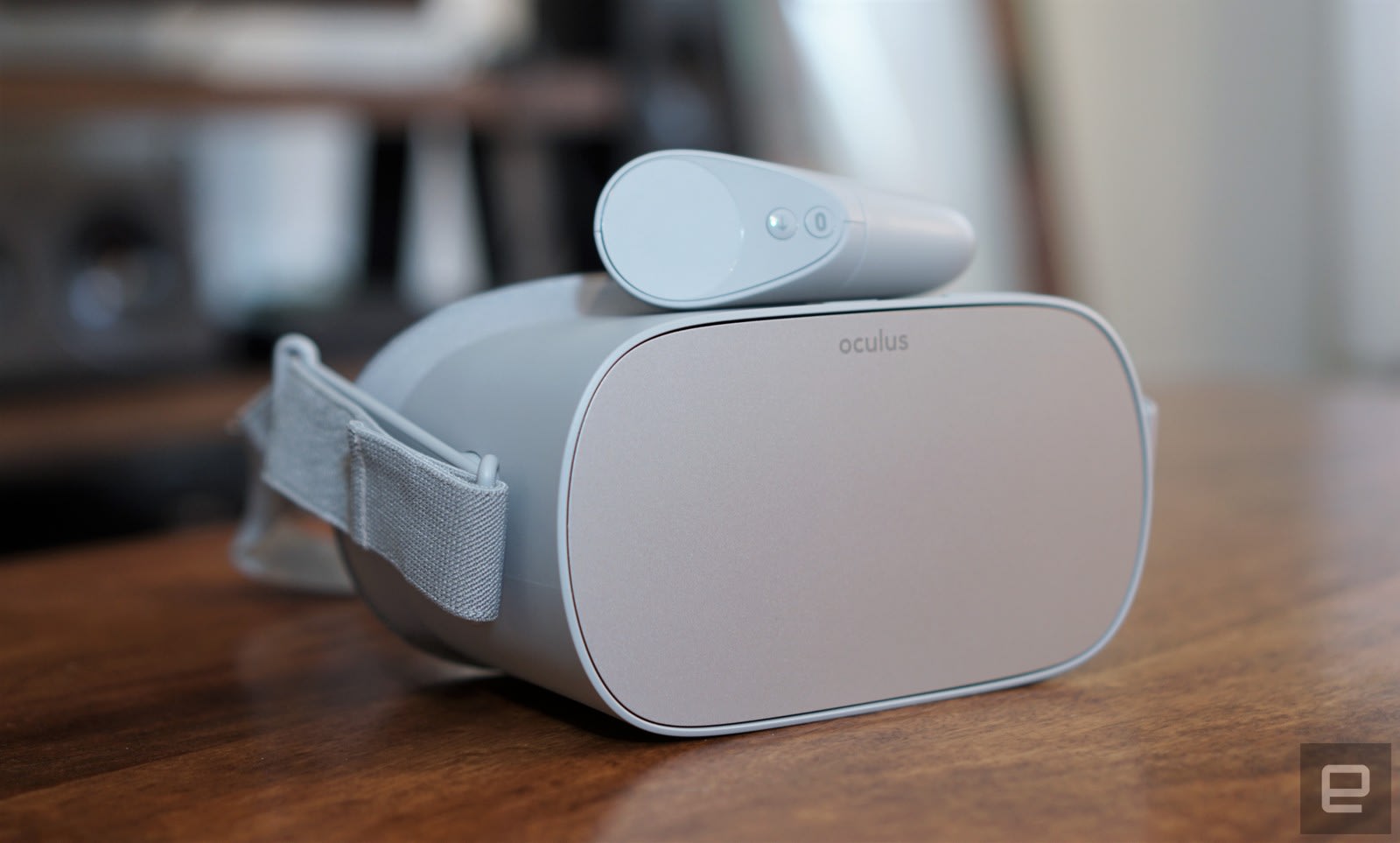 Just when it seemed as though consumer VR was reaching a lull, the Oculus Go arrives to show us something completely new. Ultimately, VR's future won't depend on expensive and niche hardware like the HTC Vive Pro. Instead, it's the cheap and comfortable headsets like the Go that will win hearts and minds.

All products recommended by Engadget are selected by our editorial team, independent of our parent company. Some of our stories include affiliate links. If you buy something through one of these links, we may earn an affiliate commission. All prices are correct at the time of publishing.
View All Comments
Oculus Go review: Finally, cheap and easy VR for everyone