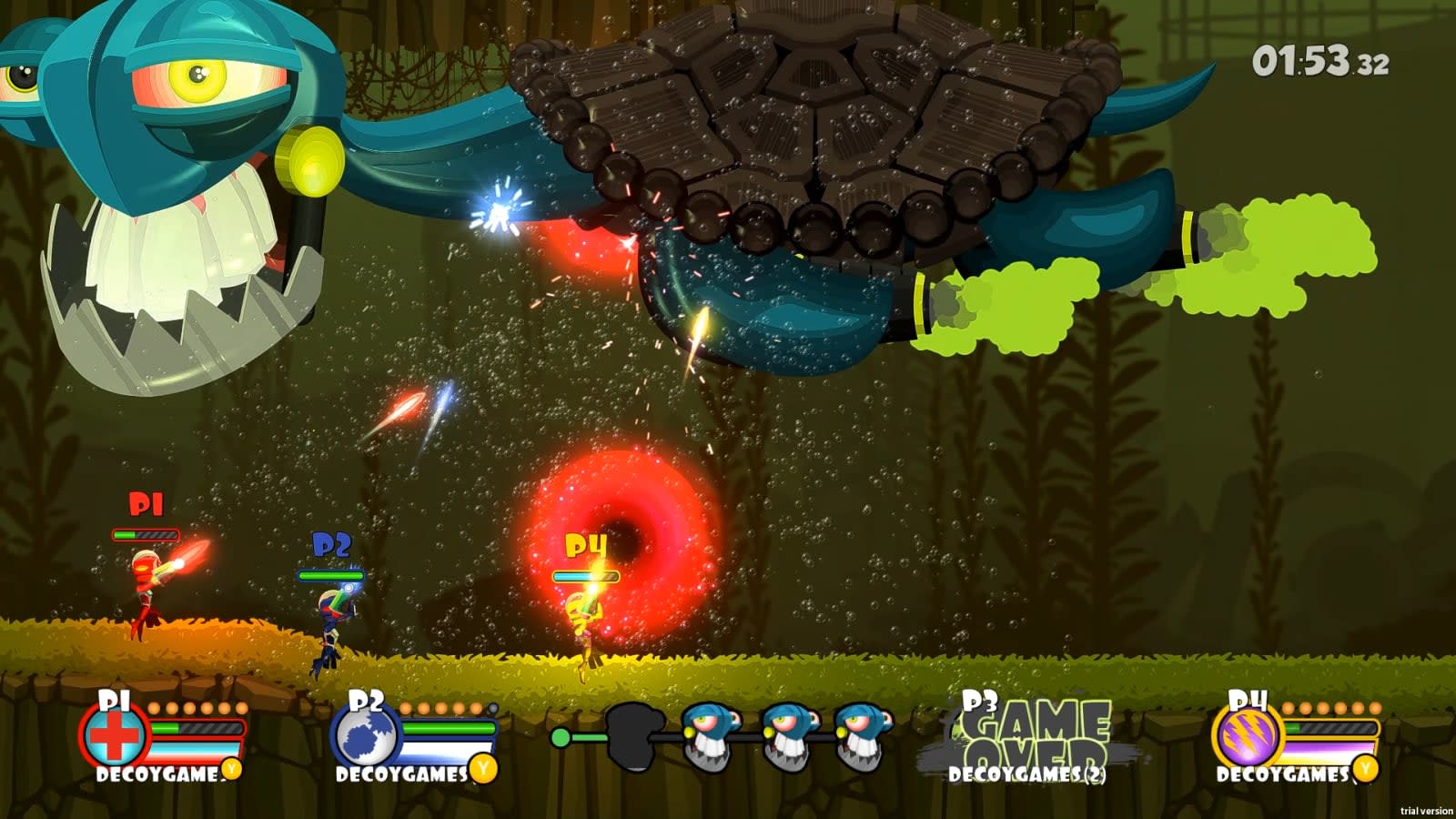 If you've ever watched The Little Mermaid and thought to yourself, "dang, that'd be some good hunting," have I got the game for you. Swimsanity is a four-player adventure shooter set at the bottom of the sea that offers a surprisingly wide variety of co-op and competitive gameplay styles.

I was afforded a quick demo of the game at the Nintendo Nindies event at GDC 2019 on Wednesday and it left me breathless. The visuals are bright with a slightly cartoony art style that lends to the lighthearted (albeit intense) action. The controls are equally crisp and responsive -- players aim their fire with the one control stick and move with the other, a la Smash TV. However, there's far more to the game than simply swimming in circles while mowing down incoming swarms of enemies. The co-op Survival level that I enjoyed was riddled with warp gates, allowing players to teleport across the course to evade enemy mobs or launch surprise counterattacks to their rearguard.

The game offers a huge variety of gameplay options. Up to four people can play together online or locally (or a mix of the two with the CPU filling in), either working together to unlock more than 150 in-game challenges or facing off in head-to-head fights to the fin. There's also an Adventure mode wherein players "embark on a journey as our hero Mooba to protect all the Orbs and save the underwater world," according to the game's website, though I wasn't able to personally give it a shot.

Swimsanity also offers a unique upgrade system wherein rather than building the character's individual stats (ie health, resiliency, attack strength), players work to enhance the character's "Unleash" ability. These super moves include everything from temporary shield and firepower enhancements to mass healing moves that replenish the health of everybody in the party. There's even one that transforms the player into an enormous shark that clears every enemy on the screen. What's really cool is that these powers can be further increased and augmented if the entire party activates their individual Unleashes simultaneously. Needless to say, coordination is key in these scenarios.

Swimsanity is expected to launch Summer of 2019 and be available for the Switch, PS4, Xbox and Steam. There's no price yet set.

In this article: av, gaming, gdc2019, hands-on, nintendo, ps4, steam, swimsanity, switch, xboxone
All products recommended by Engadget are selected by our editorial team, independent of our parent company. Some of our stories include affiliate links. If you buy something through one of these links, we may earn an affiliate commission.