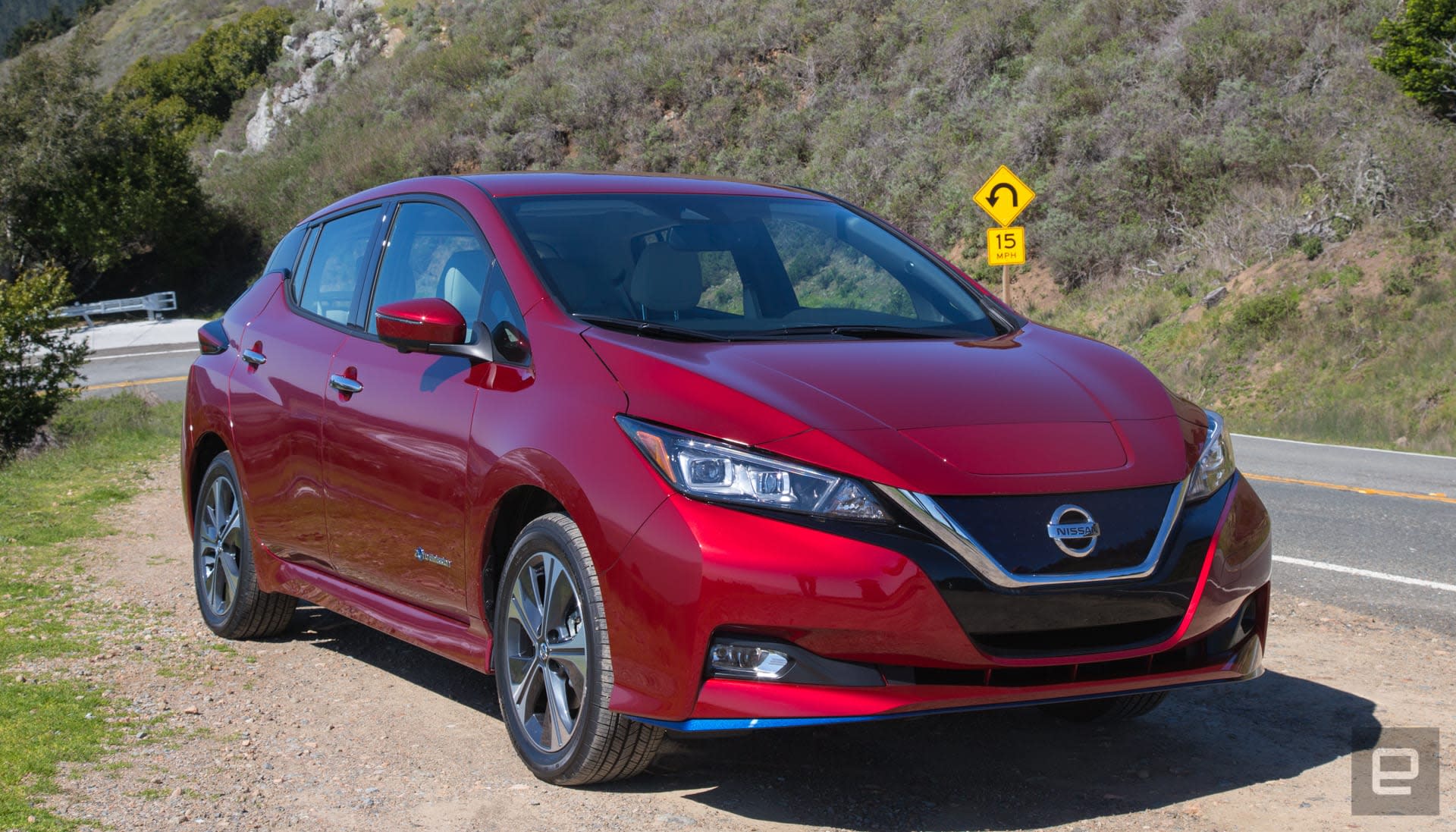 While other automakers were debating the merits of the electric car, Nissan was already selling the Leaf (the little EV hit the market in 2010, two years before the Model S). The automaker has sold over 400,000 units since then. That's impressive. But in the past nine years, the EV market has changed, and when the latest version of the vehicle was unveiled, it had a range of 151 miles. That's clearly not enough for our new over-200-mile-range vehicle world. So in January of this year, the Leaf Plus (starting at $36,550) with 226 miles of range appeared. Problem solved, right? Well, maybe.

At its heart, the Nissan Leaf Plus is a great little electric hatchback. During my tests, I found it to be a capable car that delivers on nearly all of its promises. It's efficient, full of most of the latest tech with a surprisingly spacious trunk. But it's missing something: fun. Not that there's anything wrong with that.

First, the good. The actually really good. Nissan introduced ProPilot Assist last year, and it immediately impressed me. Mostly because the first car to get the newest driver's assistant was the Leaf. It's one of the best semi-autonomous systems for an electric vehicle in this price range. The lane-keep assist does a great job centering the car in its lane and can handle most highway curves. The adaptive cruise control feature is smooth; it responds when a car merges in front of the Leaf. I'm also a fan of the steering wheel button as the main on/off switch for the system.

Another great driving feature is e-Pedal, which allows for one-pedal driving. The system works like this: Once activated, the vehicle's regenerative braking power is cranked up to slow the car down to a complete stop whenever you're not accelerating. It's a smooth transition from accelerating to stopping so you're not being jarred around in the car.

When using the e-Pedal -- especially in the city and after some practice -- a driver could get around without ever having to use the foot brake. It takes a bit to master the system so that when the Leaf comes to a halt at an intersection you're not too far back or in the crosswalk. But, the added efficiency you get while in this mode makes it worth the effort to learn. 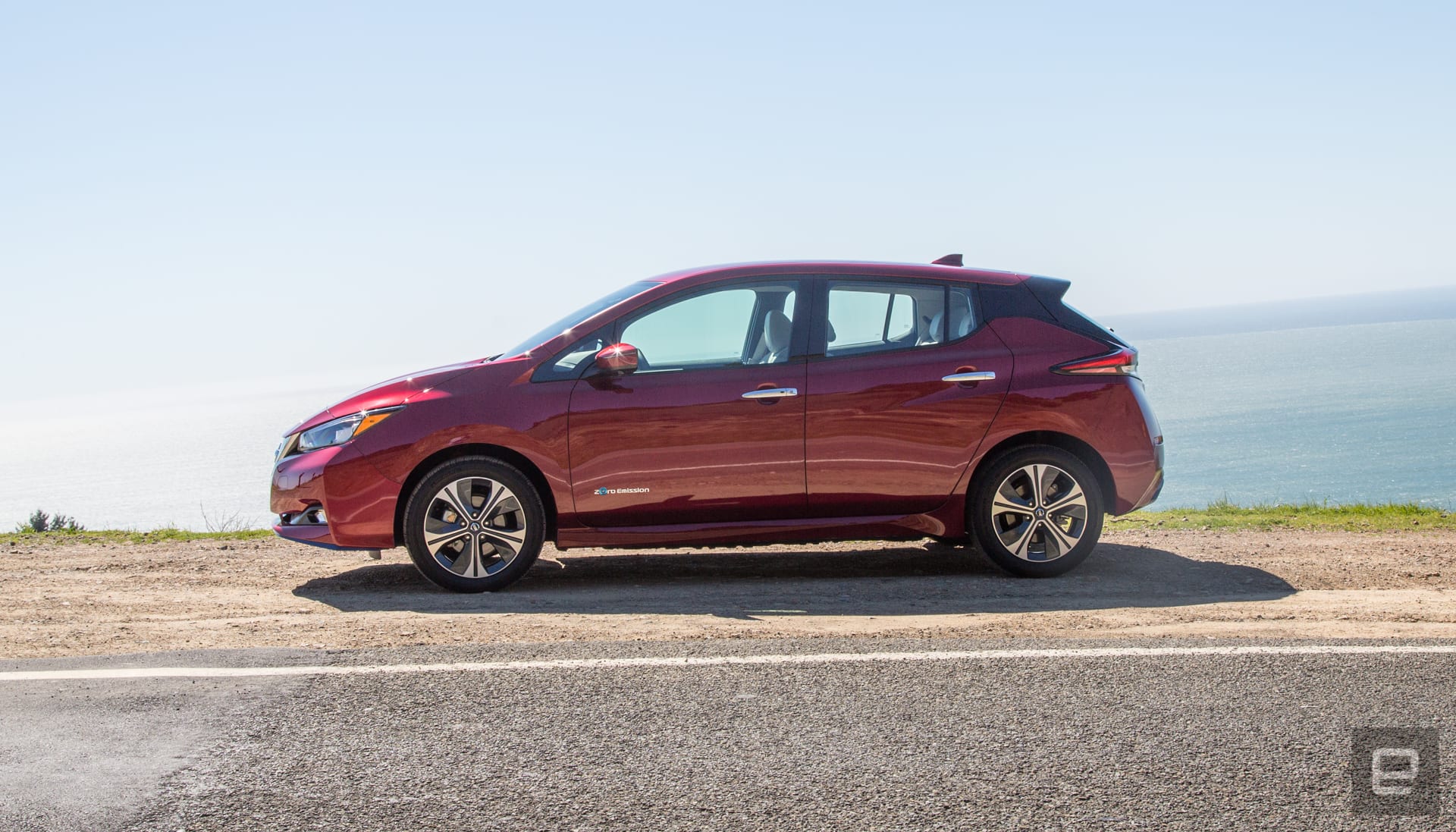 For EVs, efficiency is the name of the game (aka, battery life). The Leaf Plus' 62kWh cell delivers up to 226 miles. That's a solid upgrade from the 151 of the regular Leaf, but short of Hyundai's 258 mile Kona EV and Kia's 240 mile Niro EV. Nissan made a smart move with the Plus, but it'll have to do better next refresh or risk being left behind (again).

Inside, the automaker's NissanConnect infotainment system sits behind an 8-inch touchscreen, and instead of just copying a tablet, each screen mimics a home screen with one main feature surrounded by other options. The system offers up more information in larger easy-to-glance-at squares.

There was some latency between my taps and something launching, but it wasn't enough to become a nuisance. The only real issue I had was with the voice assistant clearly not understanding me about 70 percent of the time. Fortunately, CarPlay and Android Auto are supported so you can just yell at those instead, after you get tired of Nissan's hard-of-hearing in-car assist.

While I was unable to satisfactorily talk to the car, I was impressed by the dash cluster that shares a majority of the important information you want from an EV -- including charging progress and real-time efficiency numbers. Throw in the ProPilot Assist driving information and the Leaf's dash cluster is the most important screen in the car.

Nissan has done a great job infusing tech into its latest Leaf. This is likely thanks to it being one of the only EVs on the market with any sort of history. This vehicle is an evolution of the Leaf brand. I just wish Nissan had added some pizazz to the EV. 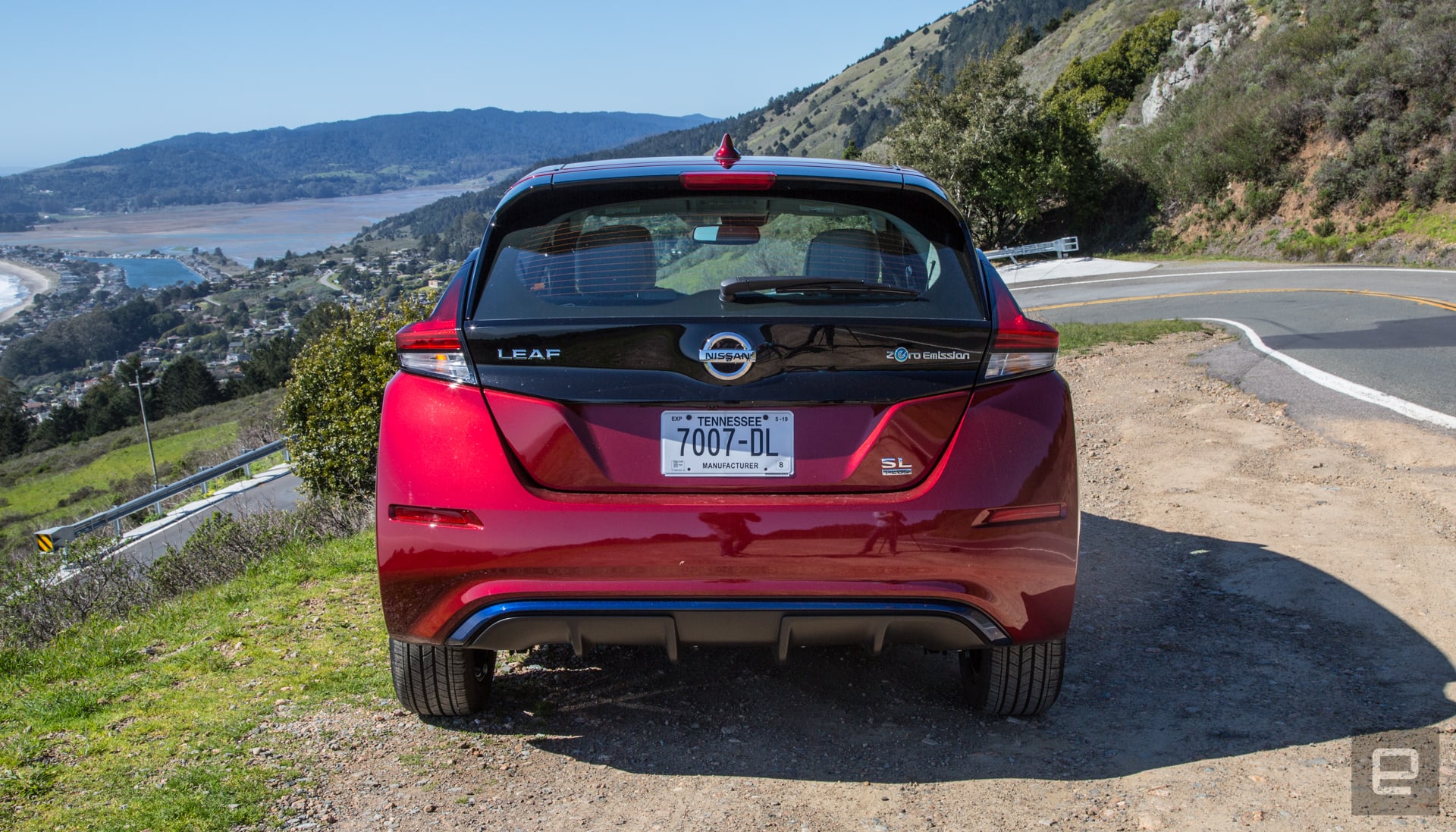 Don't get me wrong. The Nissan Leaf Plus performs exactly as you would expect. Its 214 horsepower and 250 foot-pounds of torque give it a nice initial burst of speed. But it's short-lived and for the most part, the acceleration and steering are uninspired. The car is a well-written reference book instead of a piece of great fiction. Some people like reference books and cars that perform as advertised. For those folks, the Nissan Leaf delivers. But I like character and the Leaf Plus is lacking.

At least, while you're sitting in the car, you're comfortable. The seats, while situated a little high for my taste, are pleasant. A lot of Leafs will end up as commuter vehicles and having a seat you don't mind sitting on is important. If you're someone that hauls a lot of stuff, you'll be happy to know that the Leaf has 23.5 cubic feet of space. The Kona EV, for comparison, only has 19.2 cubic feet. The Nissan gets all that extra room thanks to a deep trunk well. That space is usually taken up by the battery pack in other cars and it's nice to reclaim it for groceries, sports gear or furniture from Ikea.

After a long day of driving, the Leaf has the requisite level 2 charging port. But its quick-charging port is the CHAdeMO standard. It can be a bit tougher to find compatible charging stations, but the added benefit is that I was able to use fast-charging stations without waiting in line behind a bunch of Chevy Bolts. 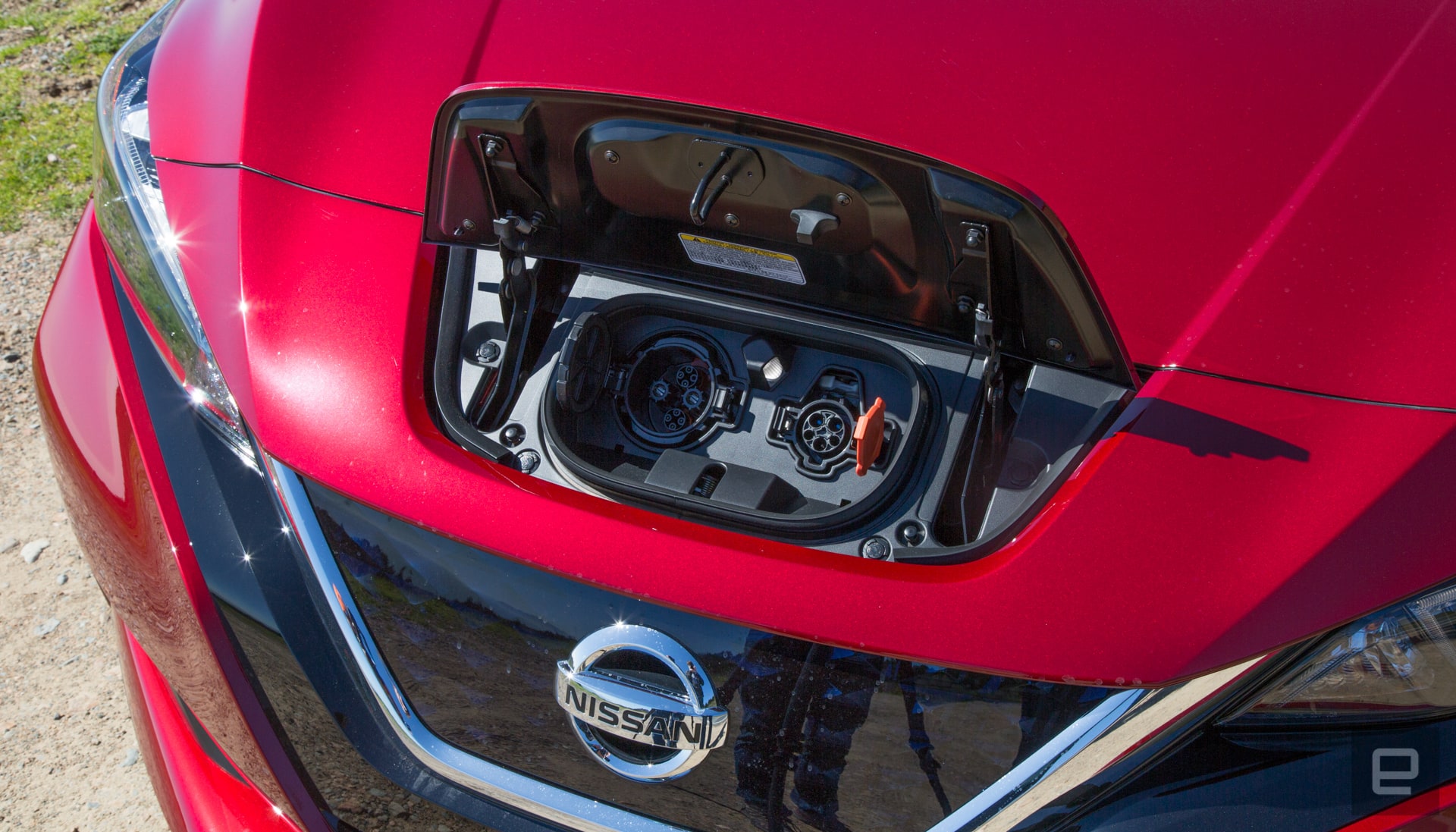 The Leaf Plus supports up to 100kW of fast charging. Most stations right now are 50kW. But hopefully, soon we'll see these quicker stations. Even if CHAdeMO doesn't catch on like the DC combo charging port, at least Nissan dealerships will be someplace Leaf owners can top off in a jiffy.

The Nissan Leaf is a smart mid-cycle upgrade to the latest Leaf. The car is the best-selling EV ever and Nissan has taken most of what it's learned over the years to make it better. That includes a first-class driver's assistance package. But, the market is getting crowded, and when it comes to range and fun behind the wheel, the Leaf falls short of its competitors.