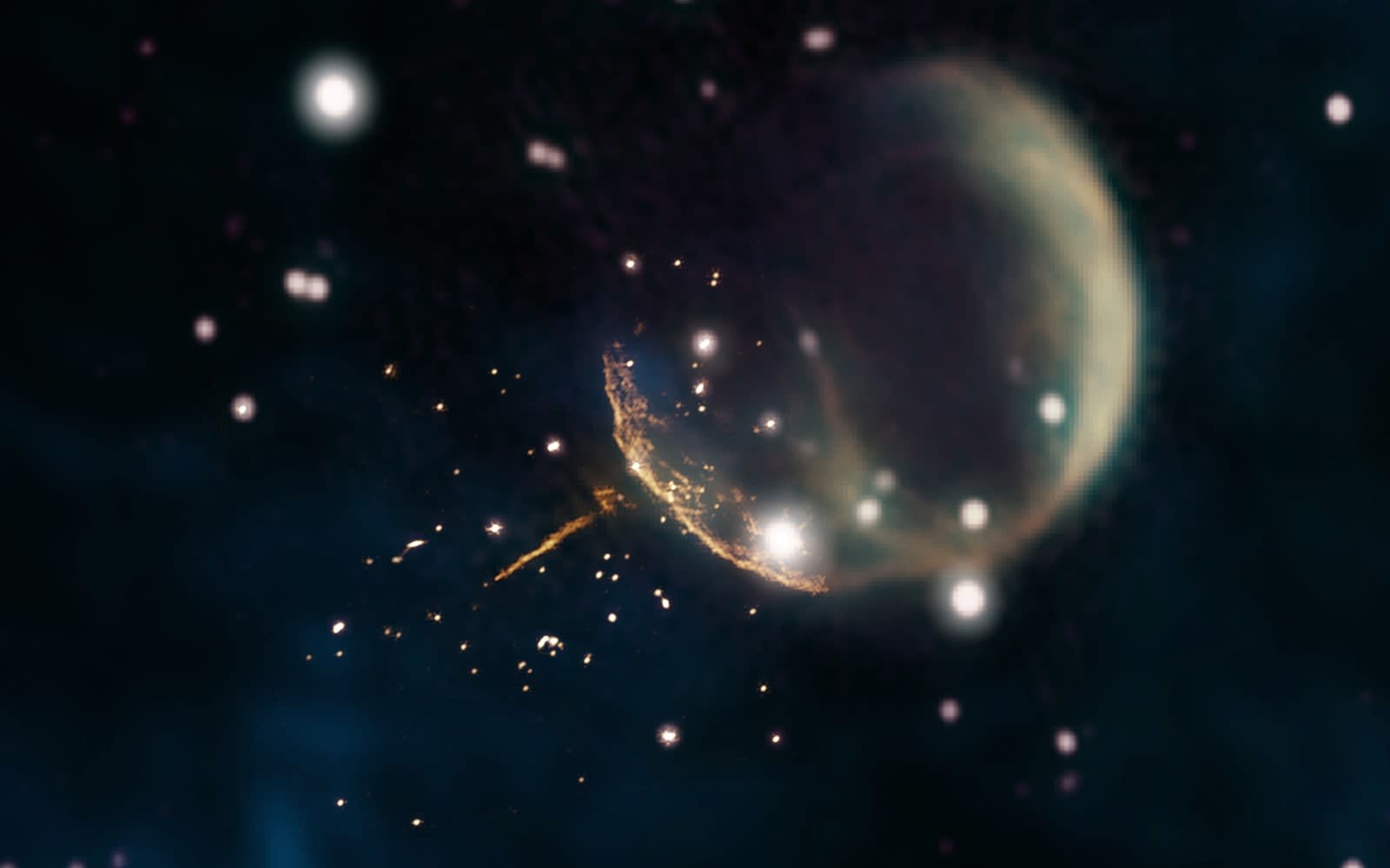 Astronomers have clocked a spinning star at 2.5 million MPH and grabbed an image that leaves no doubt where it came from. Using NASA's Fermi Telescope and the Karl G. Jansky Very Large Array (VLA), a team of scientists imaged pulsar J0002, originally discovered by citizen science project Einstein@Home. What makes it look so cool is the clear evidence it came from a recent supernova. "Thanks to its narrow dart-like tail and a fortuitous viewing angle, we can trace this pulsar straight back to its birthplace," said NRAO scientist Frank Schinzel.

Pulsars are superdense neutron stars that form out of massive supernovae. They can only be found when their electromagnetic beams points directly to Earth like a nuclear-powered lighthouse. Pulsars have been found to rotate as fast as 1.6 milliseconds, or 38,500 rpm. They pick up the angular momentum of the massive stars that formed them, but are a fraction of the size. That translates into rotational speed, in much the same way figure skaters spin faster when they pull in their arms.

J0002, located about 6,500 light years away in Cassiopeia, isn't quite that fast. However, it does spin at a healthy 8.7 times a second, each time producing a gamma ray burst seen from Earth. Astronomers at Einstein@Home spotted it in 2017 while sifting through gamma ray data using computer cycles borrowed from volunteers. The photo above is a composite of older images from the DRAO observatory and new observations from the VLA. The latter shows the orange pulsar tail and and curved rim of the supernova remnant.

Scientists aren't sure why J0002 is moving faster than 99 percent of measured pulsars. One theory is that the collapsing star that formed it had regions of dense matter that pulled the newly formed neutron star like a "gravitational tugboat." Shortly after it formed, the supernova shell outran the pulsar, but interstellar gas eventually slowed the relatively sparse debris. Meanwhile, the pulsar acted like a cannonball, piercing the remnants and escaping them about 5,000 years after the explosion.

Pulsar J0002 will eventually escape our galaxy, too. Suffice to say, you wouldn't want to be in the way -- such objects are very small (12 miles across on average), but can weigh twice as much as our sun. And at 2.5 million MPH, it could travel from the Earth to the Moon in just six minutes. At a certain point, it could cool to the point that it can no longer be detected -- luckily, thanks to the built-in arrow, we'll always know exactly where it's going.

In this article: Einstein@home, gear, J0002, NASAGoddard, Pulsar, space, Supernova, TheBigPicture, thenewbigpicture, tomorrow
All products recommended by Engadget are selected by our editorial team, independent of our parent company. Some of our stories include affiliate links. If you buy something through one of these links, we may earn an affiliate commission.