With a matching 32-megapixel triple-camera setup on the rear.

Samsung has launched its biggest A-series phone ever, and it has a pretty impressive camera setup, too. The Galaxy A70 packs a 6.7-inch Super AMOLED 20:9 1,080 x 2,400 display with an "Infinity-U" notch. That houses the 32-megapixel, f/2.0 selfie camera that beats the main camera on many other phones. On the back is a 32-megapixel F1.7 main camera (trumping the 24-megapixel main camera on the last model), an ultra-wide-angle camera and a depth sensor.

With a large 4,500 mAh battery, the Galaxy A70 supports 25W fast charging, making it the first Galaxy phone to do that (the Galaxy S10 5G will also support 25W charging when it arrives in April). As for other specs, it packs an 8-core processor, 6GB or 8GB of RAM (depending on the options and region), and 128GB of internal storage on top of a microSD slot that bumps it by 512GB. You'll also get both facial recognition and an in-screen fingerprint reader. 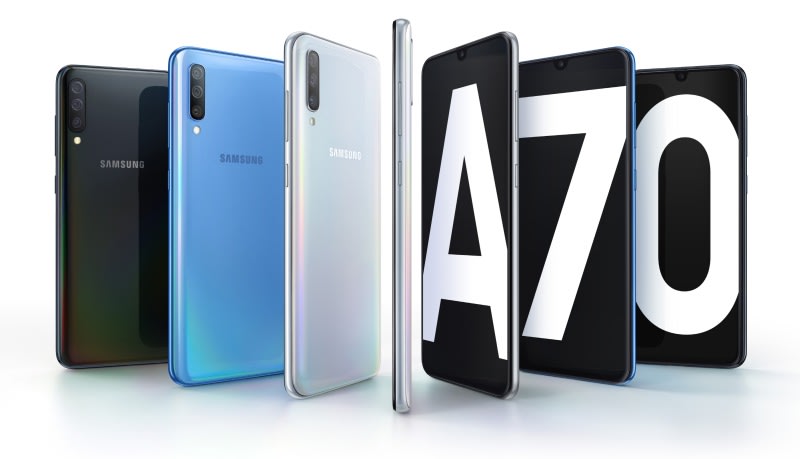 The only thing missing is maybe a zoom lens like the kind you can find on Huawei's $400 P20 phone. Still, these are very interesting specs for a mid-range device, and Samsung is likely hoping to drum up some business in that market, given how much the demand for high-end phones has dropped. Samsung has yet to reveal the A70's price and availability, but will reveal more on April 10th.

All products recommended by Engadget are selected by our editorial team, independent of our parent company. Some of our stories include affiliate links. If you buy something through one of these links, we may earn an affiliate commission. All prices are correct at the time of publishing.
Samsung's Galaxy A70 has a huge display and 32-megapixel selfie camera
6.7-inch
A70
AOLoriginals
daily show
engadget
Engadget Today
EngadgetVideo
entertainment
GalaxyA70
gear
Infinity-U
mid-range
mobile
samsung
smartphone