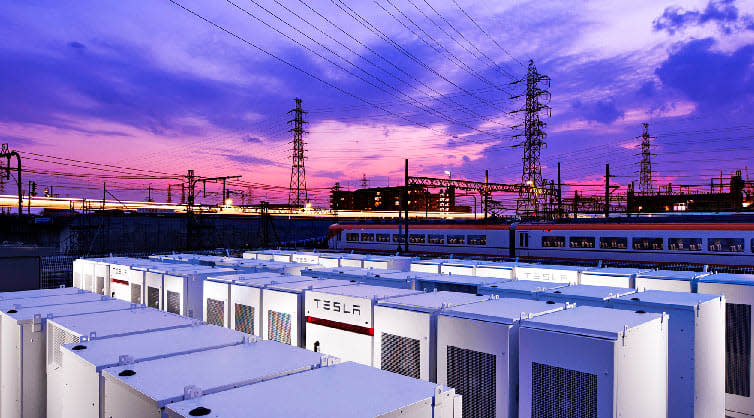 Tesla has built another Powerpack system in record time, this time at Osaka train station in Japan, where it will be used as emergency backup and to reduce peak energy demand. According to the company on Twitter, the 42 Powerpack units will provide enough energy to safely move a train and its passengers for up to 30 minutes to the nearest station in the event of a power failure.

Tesla says the 7MWh project makes this one its biggest energy storage development in Asia, and like its giant Australian Powerpack system, it was completed with eye-watering speed -- the hardware was apparently installed in just two days.

1/ In the event of a grid outage, this Osaka Powerpack installation is designed to provide emergency backup power to safely move a train and its passengers to the nearest station - https://t.co/yS6VALjIbR https://t.co/2Ui6jUmGwo

Osaka's trains are some of the busiest in Japan, transporting millions of people every day, so Tesla's Powerpack will undoubtedly prove a blessing during power interruptions. While the company's energy division tends to take a backseat to its EV work, its 2018 figures show it's playing an increasingly prominent role not only within the Tesla empire, but across the energy storage landscape in general. Last year the company deployed 1.04Gwh of energy storage, nearly triple the 358MWh rolled out in 2017.

Update (3/27 7 PM): This post has been updated to reflect that Osaka Powerpack is Tesla's largest energy storage system in Asia, not the largest one in all of Asia.

In this article: Asia, battery, business, energy, green, Japan, Osaka, Powerpack, services, storage, Tesla, tomorrow, train
All products recommended by Engadget are selected by our editorial team, independent of our parent company. Some of our stories include affiliate links. If you buy something through one of these links, we may earn an affiliate commission.