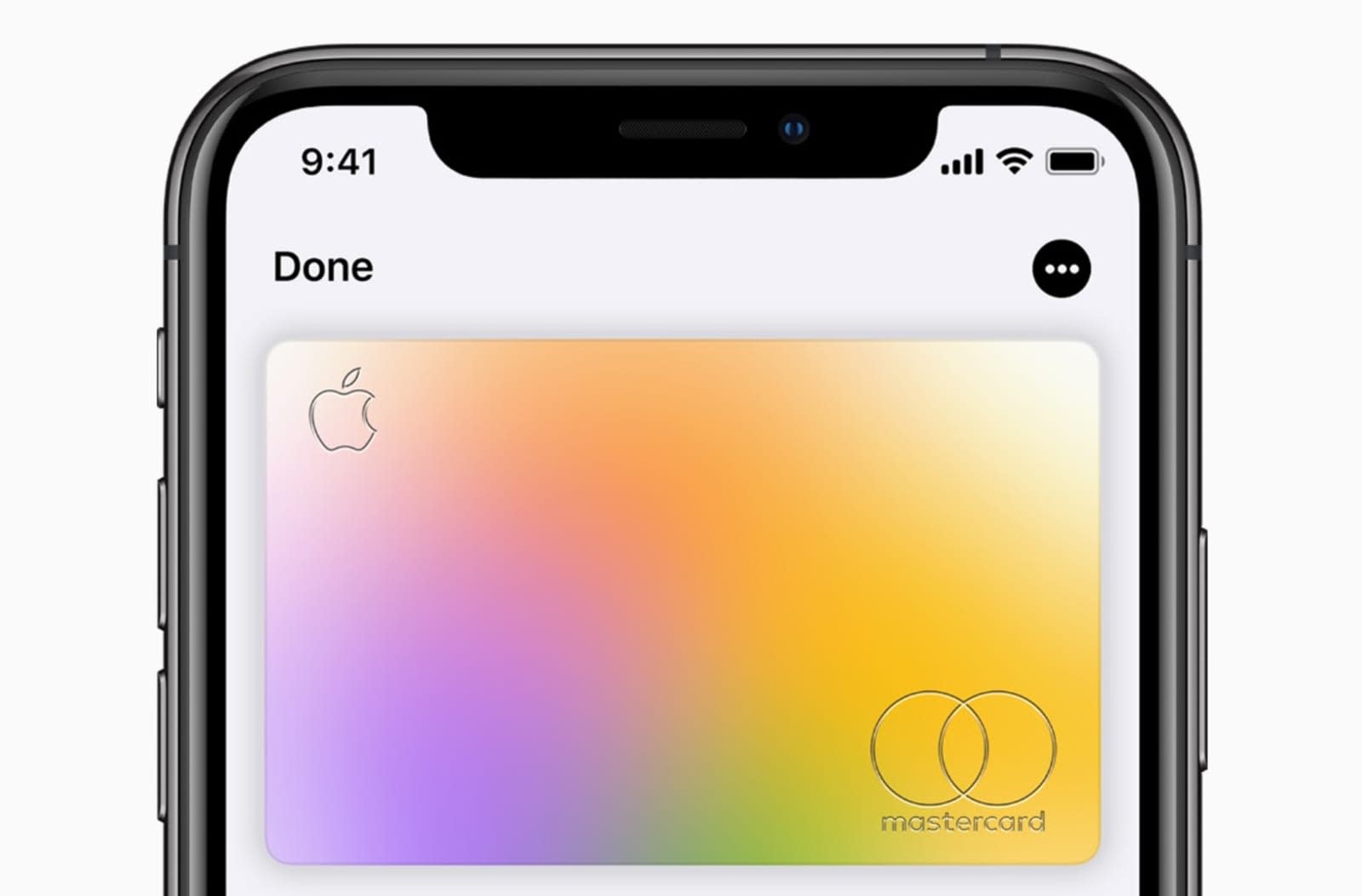 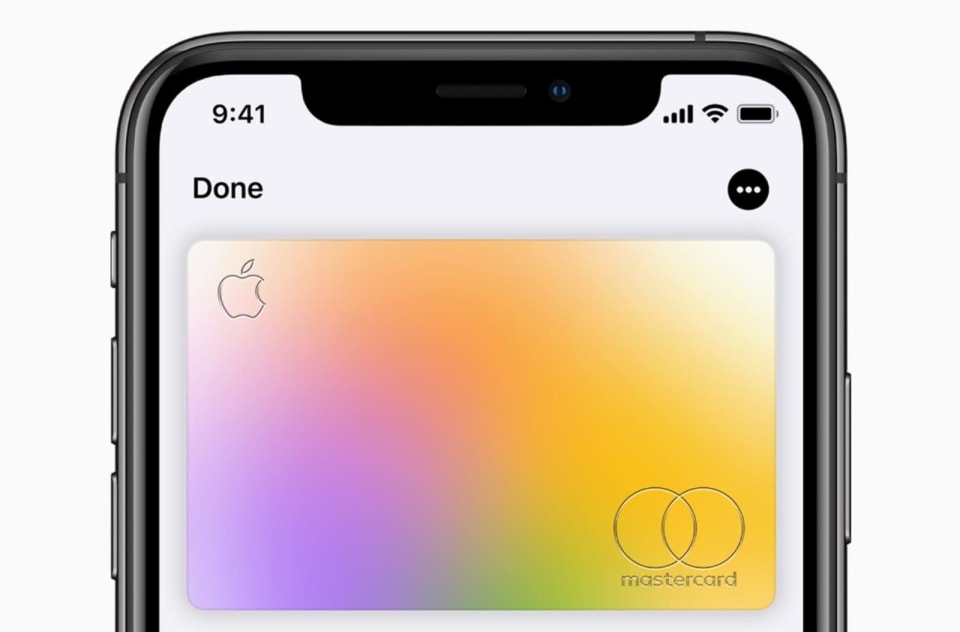 With its latest product, Apple wants your money. But it also wants to be your personal finance coach. The company is pitching the Apple Card as a way to "help customers lead a healthier financial life," mostly through an intuitive app interface, a lack of fees and a unique new payment structure. The Card, issued in partnership with Goldman Sachs, does appear to give consumers greater control and understanding of their debt. But it's also another way to keep users stuck in the Apple walled garden -- how can you switch to Android when you owe thousands on your Apple Card?

The benefits for Apple are clear, but there's a potential upside for users too. More and more people are drawn to the convenience of mobile wallets, and replacing your credit card with your iPhone seems like a natural evolution. Apple's promises about transparency, privacy and security are very alluring, and it's encouraging to see a tech titan take on an industry that's historically taken advantage of consumer confusion. But before you get too excited or angry about the Card, there are some important issues to discuss.

What is the Apple Card and how do I get one?

Basically, it's a credit card. But it's different from conventional cards in that you don't need a piece of plastic before you can start using it. You can sign up from your iPhone, get approved in minutes and use it immediately via Apple Pay. The company will send you a physical card (which Apple crafts from titanium) for times when you need one, like for starting a tab at a bar or to pay a merchant that doesn't take Apple Pay. You can get it for free, and it'll arrive in the mail within two days.

This dramatically reduces the amount of time spent waiting on approval and access to your credit. Apple also promised not to charge late fees or international transaction fees or to even set a minimum payment. Interest rates are supposedly lower than on other cashback cards, ranging between 13.24 and 24.24 percent (current rates set by the Fed), and are determined by your creditworthiness.

What about those cashback offers?

Compared with existing cards, Apple's rewards and cashback offers are underwhelming. Sure, the 3 percent return on Apple products is higher than the industry average, but it's incredibly limited on where you can earn. Plus, the 1 percent on physical card purchases and 2 percent on Apple Pay transactions simply can't compete. "[Those rates] won't sway customers away from competing products, such as Citi Double Cash, which ultimately offers 2 percent back on every purchase," according to Zach Honig, editor-at-large at The Points Guy. 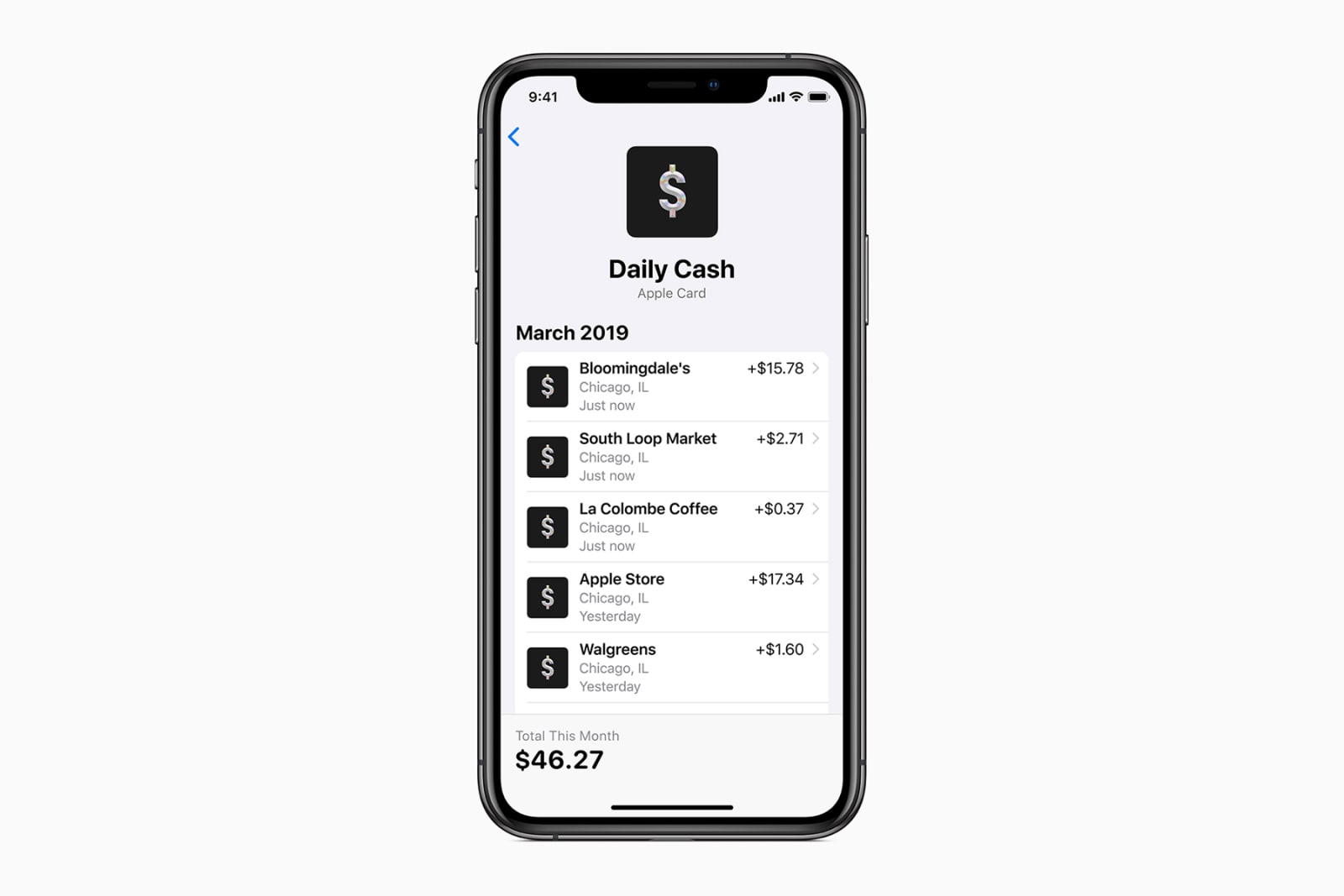 What is nice is about Apple's Daily Cash program is that you can (basically) immediately use the money you get back. The rewards are collected on a cash card, and you can get this out via your bank account or use the dollars on things like apps, songs, movies and online shopping, or even pay your friends. The rewards hit the card daily, so you can accumulate money more quickly instead of having to wait weeks to spend what you've earned. There's also no cap on how much Daily Cash you can accrue.

What happens when I lose that physical card or my iPhone?

Since the titanium card doesn't show your credit card number, expiration date or signature, it makes it harder to steal your information. But because all it has is your name, anyone with your card could potentially take it and start spending. You'd have to be quick to lock your card when you realize it's missing to avoid letting a thief rack up huge transactions. If you've only temporarily misplaced your card, you can unlock your account once you've retrieved it.

Compared with a traditional card, this is more convenient than calling your bank to get it canceled. But service providers like Capital One have already been making it easier to keep track of your card and suspend your account at will, so Apple isn't breaking new ground here.

If you lose your iPhone, you'll need to go to a computer and sign into your iCloud to find it. The good news is that Apple Pay transactions will still require your Face ID or fingerprint authorization, but payments with the physical card won't. What's also nice is that when your replacement phone arrives, all you have to do is sign into your Apple account, and your Card information automatically transfers over, too.

How will Apple help me lead a healthier financial life?

The most appealing thing about the Apple Card is its user-friendly dashboard. Apple said it will use on-device machine learning and GPS information to identify and categorize your transactions. It'll also color-code your spending and use charts to show you where you drop the most money.

This isn't new; there are plenty of services available to track your expenditures and make sense of your habits, Mint being the most well known. But at first glance, Apple's interface appears to be easier to use and understand.

Having all this information in front of you might not change your behavior at all. As with Apple's and Google's digital well-being services that show you how much time you waste in certain apps, the goal is more about educating the user. It's entirely up to you to limit how much money you spend drinking at bars, but at least you'll have the data. 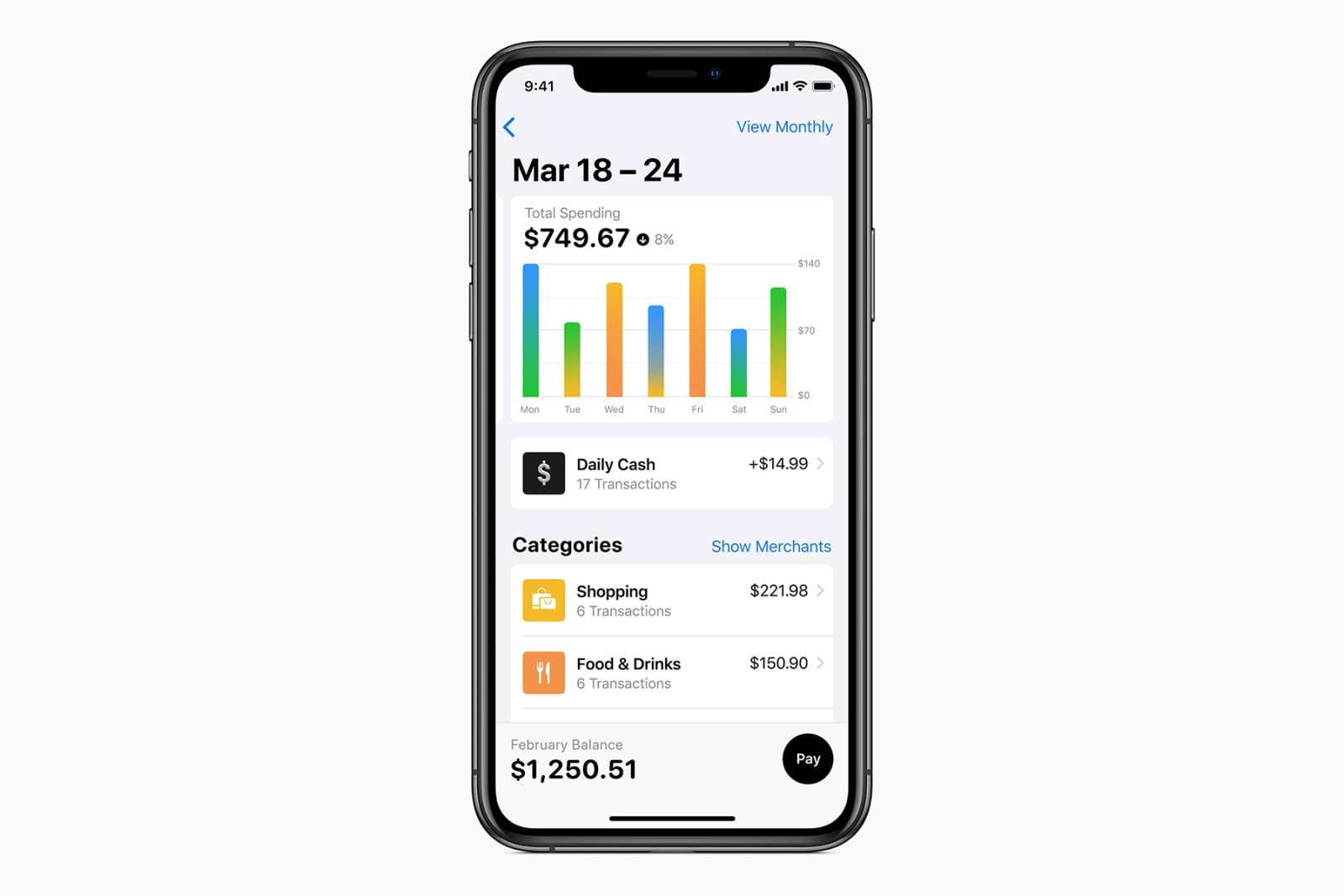 Another way Apple says it's helping you make better financial decisions is by making your payments easier to understand. Since there are no late fees, finance experts are concerned that there's nothing stopping people from taking forever to repay their debts. The only thing scaring you into paying on time is the fact that the longer you drag it out, the more you will owe.

The Apple Card dashboard should make this concept painfully clear. It's supposed to show how small increases in your monthly payments can lower your overall interest owed via an interactive animated wheel. When you need help understanding how much you should pay, you can also text or call a support operator, which is pretty convenient.

One thing remains unclear, though. Since Apple hasn't set a limit on how long you can go without making any payments, you could theoretically get away with never clearing your debt.

What about the security and privacy of these transactions?

It should be pretty clear to anyone by now that all our credit card purchases are being used to target ads to us. But Apple and Goldman Sachs said they won't sell your information for advertising or marketing purposes. (Though that doesn't mean they won't use your data themselves or for other purposes.)

As for the security of the payments, the Apple Card uses technology similar to that of other mobile wallets like Apple Pay, Google Pay and Samsung Pay. Each transaction is tokenized, meaning the identifying number for your card is masked and changes every time you use it. Basically, the level of security here is similar to that of existing digital payment systems. The major difference is that since you won't have a physical card to start with, Mastercard will have to send your phone the information remotely when you set up your account. It's not yet clear if this introduces vulnerabilities that bad actors can exploit, but Mastercard has been powering credit cards for decades and likely has safeguards against such attacks. 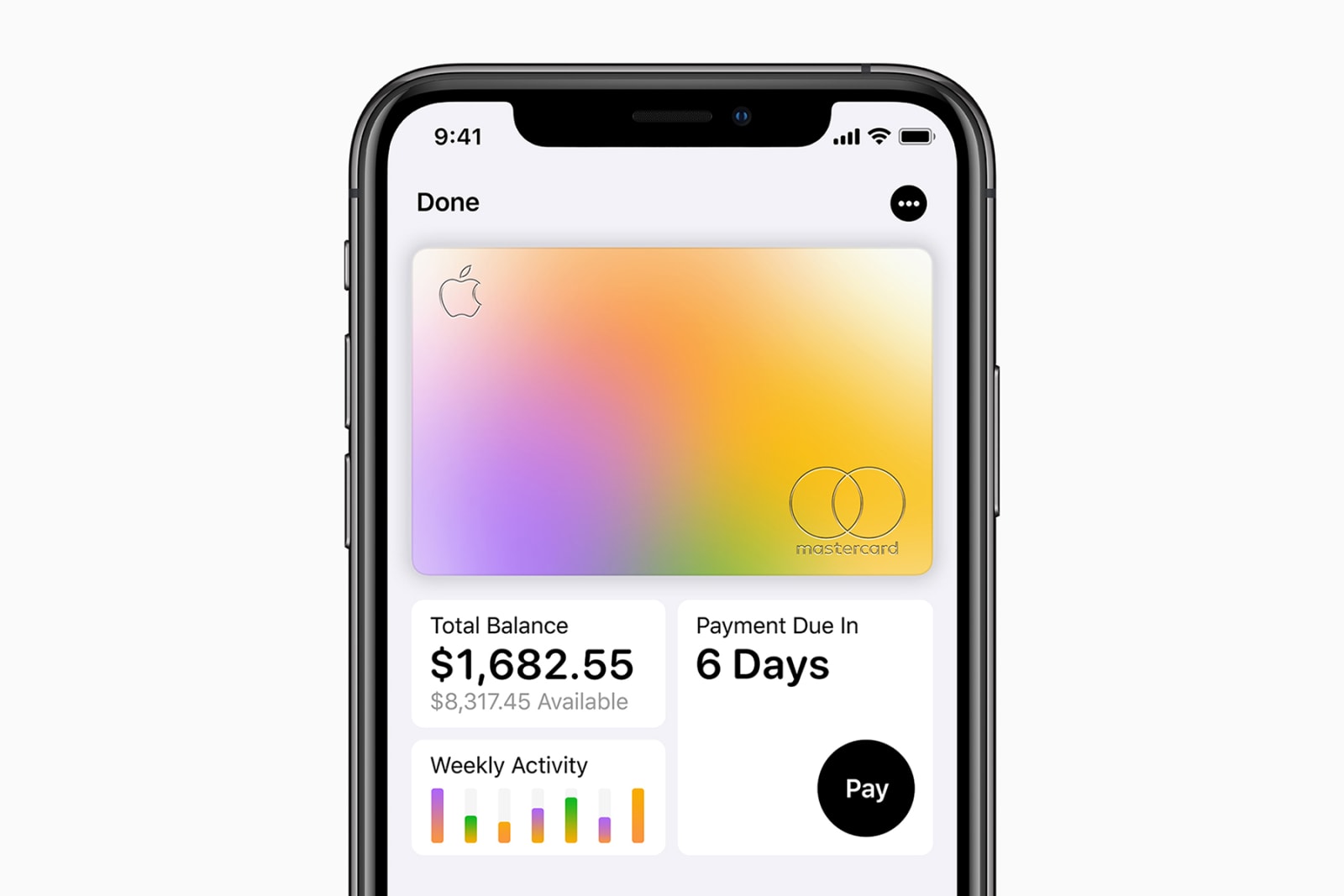 Who, if anyone, should get the Apple Card?

For first-time credit card applicants or those heavily reliant on debit, the Apple Card might make sense. "Apple's platform will give them an opportunity to get their feet wet in a familiar ecosystem, before they, hopefully, graduate to more rewarding products," Honig said. It's also a good way to get into the habit of paying more than the minimum each month.

The best thing about the Apple Card, though, is the spotlight it's shining on the importance of financial literacy. Not only does the announcement drum up media interest around the topic, but it could also encourage users to educate themselves on things like student loans and mortgages.

Like every major financial decision you make, getting an Apple Card shouldn't be taken lightly. Managing your credit requires a great deal of responsibility and some restraint. If you're thinking about it as yet another credit line to use on things you won't ever be able to pay off, don't do it. Apple may not be offering much that existing credit card companies haven't already, but its entrance into the space will at least create healthy competition that bodes well for consumers.

Update (at 3:19pm ET, 3/28/2019): This article previously stated incorrectly that the Apple Card requires no minimum payments. There will be minimum payments, though Apple wants to encourage you to pay more than just that. This post has been edited to clarify.

In this article: apple, apple card, applecard, credit card, CreditCard, finance, gadgetry, gadgets, gear, iphone, mastercard, mobile
All products recommended by Engadget are selected by our editorial team, independent of our parent company. Some of our stories include affiliate links. If you buy something through one of these links, we may earn an affiliate commission.