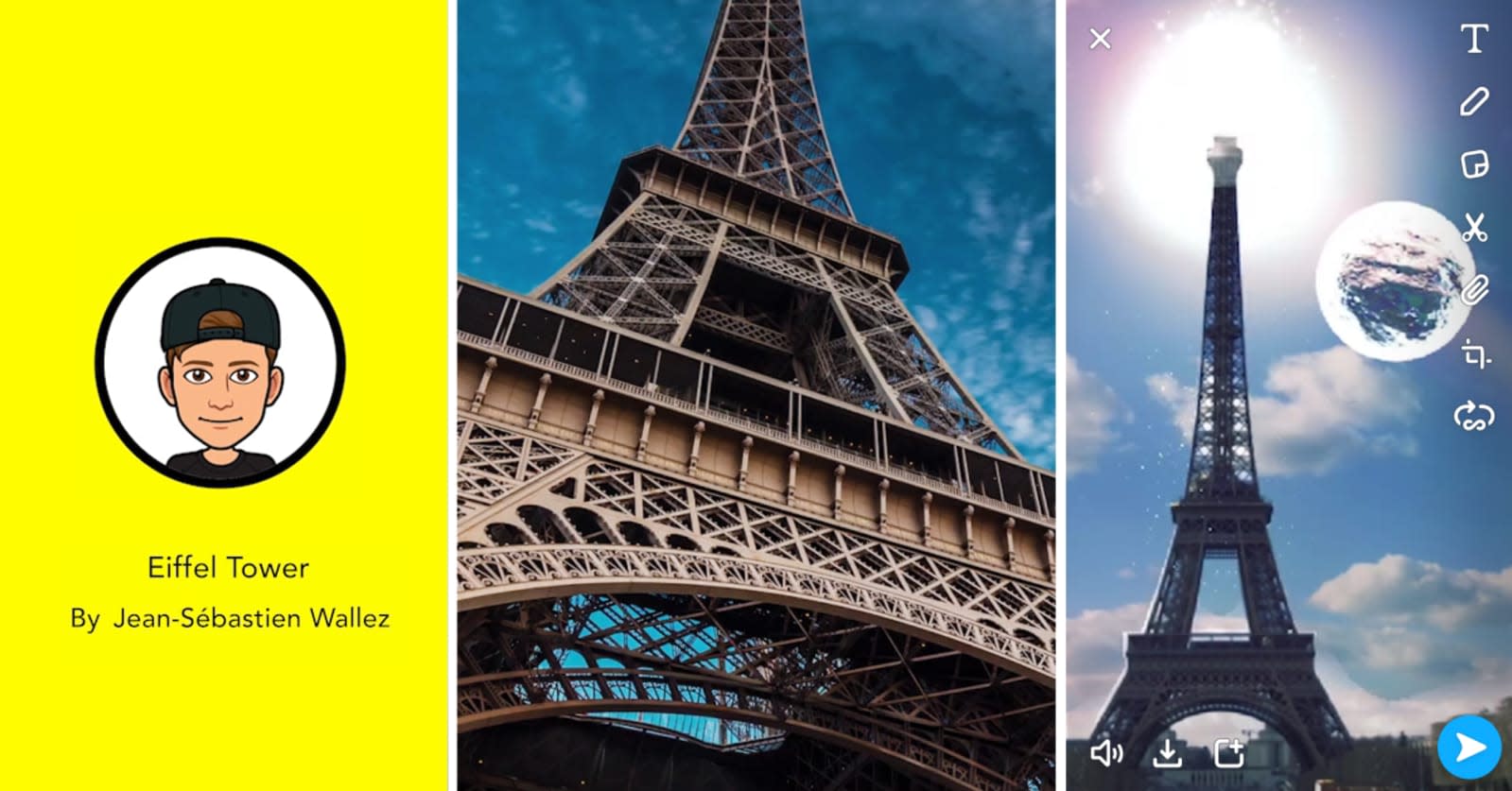 Snap is kicking off its Partner Summit in Los Angeles with a few announcements about the feature that makes Snapchat tick: augmented reality Lenses. For starters, Lens Studio, which lets anyone create their own AR filters, is getting a new feature called "Landmarkers." This will allow creators to bring landmarks across the world to life using Lens Studio's augmented reality tools, including the US Capitol Building (Washington, D.C.), Flatiron Building (New York City), TCL Chinese Theater (Los Angeles), Buckingham Palace (London) and, as pictured above, the Eiffel Tower (Paris). Snapchat users near any of these locations can check out the new Landmarkers Lenses starting today, and the company says AR support for more landmarks will be coming in the future.

During a media briefing, Snap told Engadget that over 400,000 Lenses have now been created with Studio, and they have been played over 15 billion times by Snapchat users. These figures bode well for the company, which launched Lens Studio in 2017 as a way to get the community involved in AR creation. And Snap is now expanding on that vision by teaming up with brands like Nike on DIY studios for augmented reality Lenses, something that could help bring new audiences to Snapchat.

In addition to Landmarkers, Lens Studio creators can now also access templates for tracking hands, bodies and pets, a feature that will help them make different AR experiences for people and dogs alike. Snapchat made its Lenses work with dogs last year, but now it wants to let Lens Studio users in on the fun. Creators are getting profiles, too, letting them easily showcase their projects on Snapchat.

Aside from Lens Studio updates, Snap introduced the "AR Bar" and "Scan," which will begin rolling out "soon" on Snapchat. With these features, users will be able to scan the environment around them more easily and, subsequently, bring up relevant augmented reality Lenses with just a tap. For instance, if you simply point the Snapchat camera at a slice of pizza, you can get quick access to GIFs from Giphy to put in your picture or video. Similarly, Snap has also partnered with Photomath to let you solve math equations in AR -- yes, the Snapchat camera will you give the answer right on your screen, in real time.

These changes are all an extension of the work Snap has been doing with Shazam and Amazon, the latter of which lets you shop for items directly from the camera, thanks to a visual search tool that can recognize products and barcodes from the real world.

In this article: ar, AR Bar, AR Scan, art, augmented reality, business, cameras, design, entertainment, gear, internet, interview, landmarkers, lens, lens studio, lenses, mobile, Scan, snap, snap inc, snap partner summit, snapchat, snapchat landmarkers
All products recommended by Engadget are selected by our editorial team, independent of our parent company. Some of our stories include affiliate links. If you buy something through one of these links, we may earn an affiliate commission.