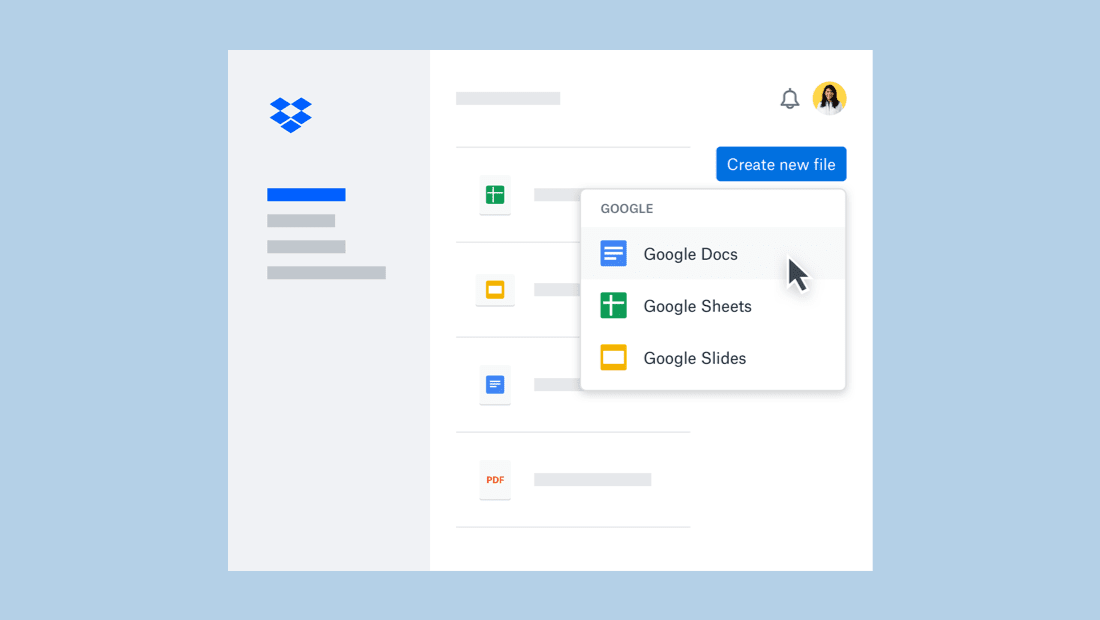 It's been more than a year since Dropbox and Google announced that they would partner to make their products (including Gmail, Docs, Sheets and Slides) work better together. The Gmail / Dropbox integration launched last summer, and now we're getting to the main event. Starting today, Dropbox Business customers can participate in an open beta program that makes Google Docs, Sheet and Slides work natively in Dropbox.

As expected, using Dropbox with Google's documents is essentially the same as Microsoft Office / Dropbox integration that's been around for a few years. For starters, when you're in Dropbox's web view, clicking the "create new file" button will show options for Docs, Sheets, and Slides alongside the option to create new Microsoft Office documents. Assuming you're logged in with a Google account, clicking one of Google's document options opens the familiar Docs / Sheets / Slides interface. The only way you'd know you're going through Dropbox is that the URL is a Dropbox domain, rather than Google.

There are a few other hints: the top of the page where it usually tells you that all changes have been saved now says "saved to Dropbox." But otherwise, you can create and edit G Suite files in the same way you would if you were going through Google Drive. Once you're done with a document, it shows up in your Dropbox alongside any other files you have saved.

Dropbox's thinking for this integration is that it wants to work with any other tool its users might be using, rather than force them into choosing between Google and Dropbox. It makes sense, given that Dropbox says it has "hundreds of millions" of Gmail or G Suite users who also use its own products. If you don't use these tools in a collaborative setting, it's probably not that big of a deal. But, Dropbox is targeting work environments where a handful of Google documents might need be shared with multiple people in a folder alongside other files related to the project or team. Yes, you could do the same thing just in Google Drive, but Dropbox obviously has a vested interest in helping its business customers use whatever tools they want — and for an organization already using Dropbox for organizing projects, this tie-in should make using Google's tools easier.

There are a few other things worth noting when using Google Docs with Dropbox. Google files that you create within Dropbox will show up on your Mac or PC, assuming you have the Dropbox app installed there. And those files are searchable using the Dropbox app — not just by filename, but the full text. That works whether you're searching through the app or on the Dropbox website. Dropbox users can also open Microsoft Office files directly in Google's tools, if they prefer. All edits made there will be synced back to the original file and the document file type will be preserved so that anyone viewing the file who prefers to use Office won't have any problems.

Finally, Dropbox's native sharing tools are integrated into Google Docs now. If you click the familiar "share" button in a Google file saved in Dropbox, it'll let you create two different shared links: one that grants edit access, and one that is read only. Files can also be protected so that they're only viewable within your organization, as well.

While Dropbox's open beta for this Google integration opens today, it's not open to everyone. Only Dropbox Business customers will be able to try it, but the company says general availability is planned for later this year.

In this article: business, docs, dropbox, g suite, gear, google, google docs, google sheets, google slides, sheets, slides
All products recommended by Engadget are selected by our editorial team, independent of our parent company. Some of our stories include affiliate links. If you buy something through one of these links, we may earn an affiliate commission.