It's meant for creators who want a rig that looks as hot as the masterpieces they create.

Acer had a lot to share at its annual global press conference in New York today. In addition to a slew of gaming laptops and monitors, it showed off a new line of pro-grade computers. Called ConceptD, the new series is the result of a collaboration with IF Design agency and targets creators who want machines that look as good as the work they produce.

ConceptD revolves around four pillars -- performance, silence, design and precision -- which is about delivering accurate colors on monitors. And the devices that Acer unveiled certainly seem to deliver on those fronts.

First up is the ConceptD 9. It's a 17.3-inch laptop with an "Ezel Aero Hinge" that lets users pull the screen in closer to them when they want to work directly on the display. This isn't a new mechanism for the company -- it's already shown up in the Aspire R13. But the ConceptD 9 has other intriguing features. Acer said it's quiet, with fan noise that's limited to under 40 decibels, which CEO Jason Chen said is about the same as the noise level in a library. 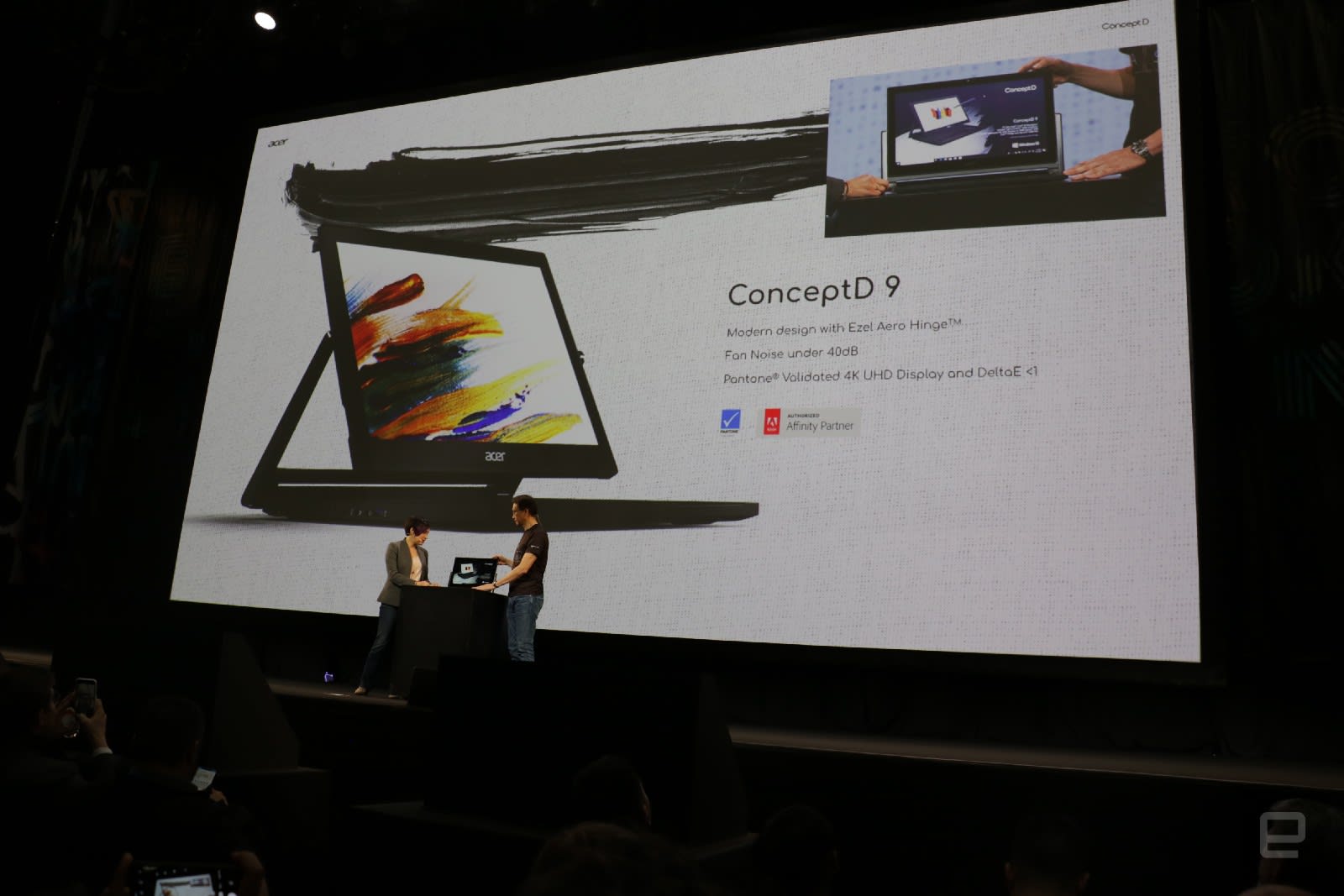 The ConceptD 9's screen has a Delta-E color accuracy rating that's less than 1 (closer to 0 is best) and is Pantone validated, which should be helpful for those who need to work with that library of hues. You can get the ConceptD 9 with up to 9th-generation Intel Core i9 processors and NVIDIA's GeForce RTX 2080 graphics.

Acer also announced the ConceptD 5, which is the thinnest and lightest of the creator notebooks, as well as the ConceptD 7. For creators who want a desktop system, Acer also unveiled the ConceptD 500, which packs a 9th generation Intel Core i9 CPU, with an NVIDIA Quadro RTX4000 graphics card that can perform ray tracing. It has an "advanced" cooling system that also runs at a quiet 40 decibels, and an attractive wood panel that helps it look more like Scandinavian furniture than machinery.

Those who need more power can consider the ConceptD 900, which is armed with dual Intel Xeon Gold 6148 processors, an NVIDIA Quadro RTX 6000 graphics chip and up to 192GB of ECC RAM and 60TB of storage. That's practically overkill, but a good option for those who need a ton of muscle. 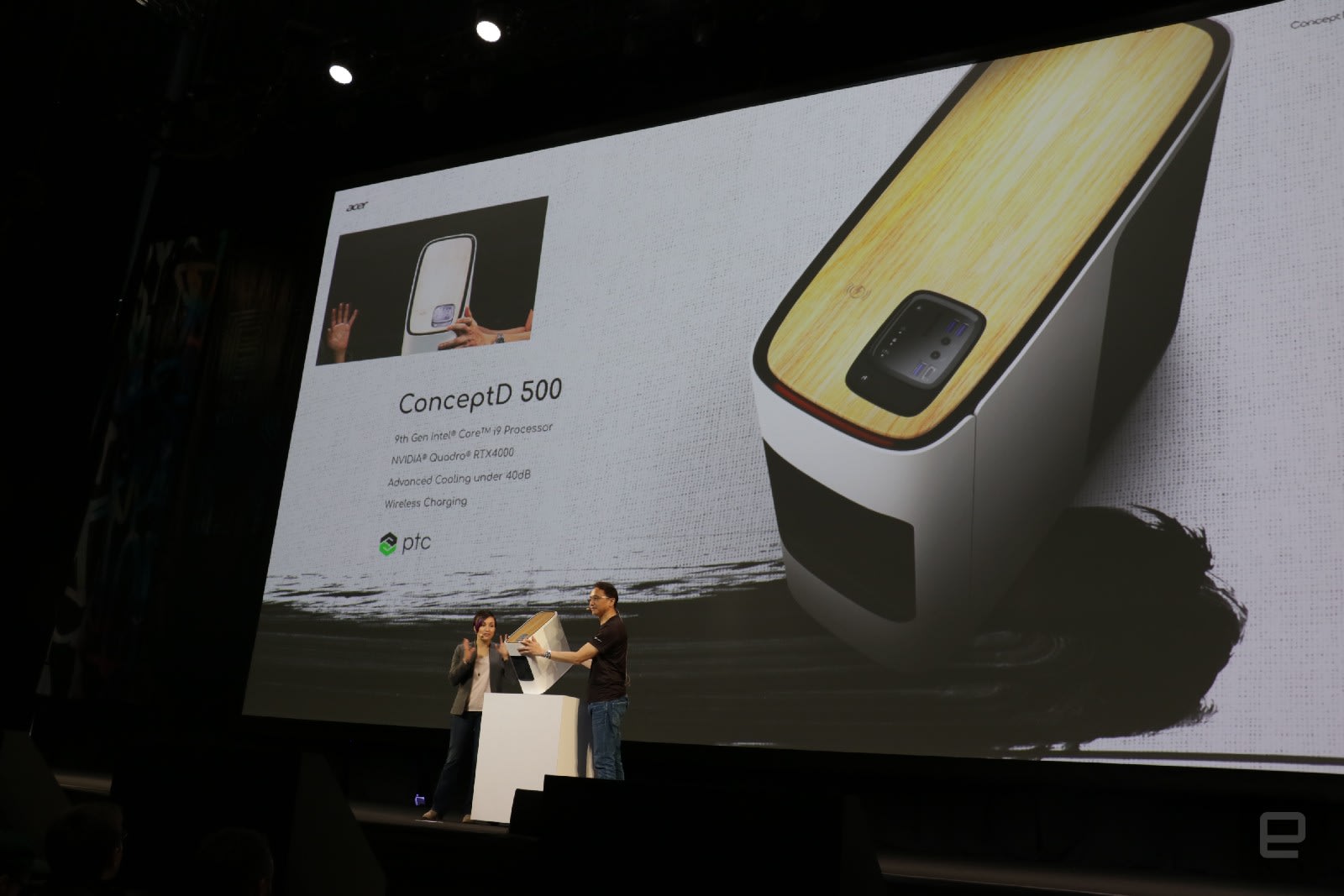 But wait, there's more! Acer also showed off the ConceptD CM7 and ConceptD CP7 monitors.The 34-inch CM 7 is meant for people who work in print design and need a larger canvas, while the CP7 is for those in digital spaces, so it's a smaller 27 inches. Both displays run at 4K, while the CP7 has a respectable refresh rate of 144hz. The company also included its StarVR headset in the ConceptD lineup, as well as a ConceptD OJO headset, which you can use to create rich, highly detailed VR environments.

Chen explained that ConceptD is not just a brand for new products. "It's a promise, it's a commitment," to delivering innovation and quality, he said. We haven't heard word on pricing and availability yet, but I wouldn't expect these to be affordable. Still, it's intriguing to see Acer make a concerted play for creators and pack such powerful performance into what appear to be elegant bodies. We'll have to wait to see if the new line is a hit or miss, but I already know that the individual product names are going to confuse me for the rest of the year.