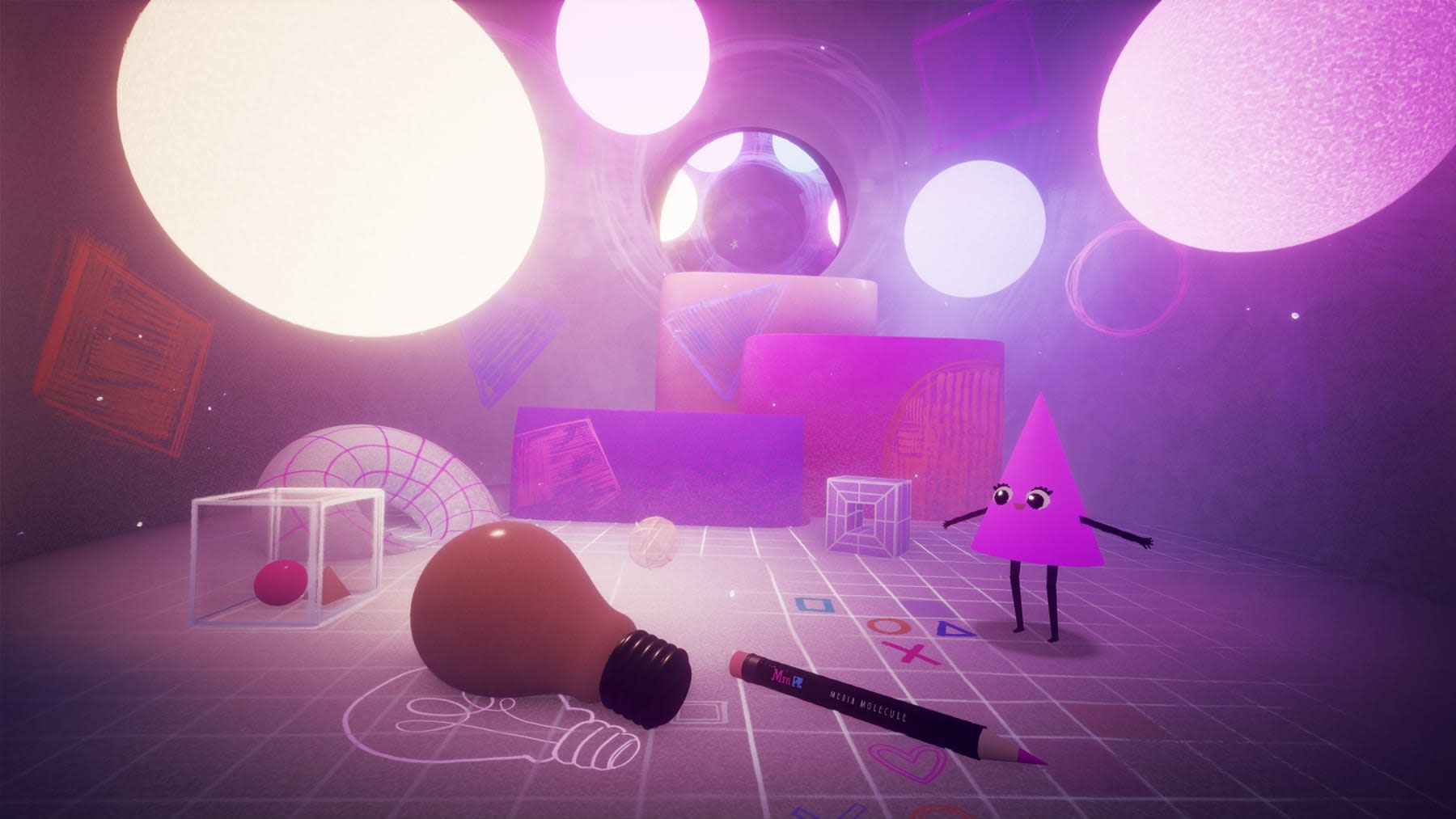 ‘Dreams’ turns the PS4 into a charming game development kit

Dreams is finally here. The latest game by Media Molecule, the delightfully whimsical studio behind LittleBigPlanet and Tearaway, was first teased at the PlayStation 4 reveal event in February 2013. A Creator Early Access was released on Tuesday (April 16th), mere hours before Mark Cerny, a systems architect at Sony, revealed the first details about the PlayStation 5. Dreams, then, was dangerously close to missing an entire console generation.

(What is this, The Last Guardian?)

I was nervous to boot up Dreams and see what Media Molecule has been slaving over for so many years. Part of me was sure the package couldn't justify such a protracted development cycle. From the opening screen, though, it was obvious where all the company's time and resources had gone. To put it bluntly, Dreams isn't a video game. It's a powerful, flexible and thankfully approachable piece of game-development software.

In short, Dreams is an engine, learning suite and distribution platform rolled into one. And , more importantly, all of those pieces are bound together with the charming visuals and narration Media Molecule games are known for.

Of course, LittleBigPlanet and its numbered sequel had robust level creators, too. They let you design, play-test and share colorful adventures built around the series' iconic patchwork aesthetic. LittleBigPlanet, developed primarily by Sumo Digital, expanded the toolset so players could use a top-down perspective similar to the original Grand Theft Auto. All three games spawned some truly wonderful and imaginative worlds, but they were always confined by the engine and gameplay mechanics of the LittleBigPlanet franchise. You couldn't build a tactical shooter, for instance, or a walking simulator like Everybody's Gone to the Rapture.

Dreams is different. Media Molecule is pitching the platform as a way to build art, movies and video games across various genres and visual styles. Imagine a version of Unity that costs less than $30 and can be learned effortlessly with either a DualShock 4 or pair of wand-style Move controllers. That's the goal and vision here. Done correctly, Dreams could liberate game development the same way Minecraft did a decade ago.

I've spent the last couple of days rattling through the game's introductory tutorials. They're well designed, with simple scenarios and a picture-in-picture video player that visualizes each instruction. A cheerful and unashamedly British narrator known as the Dream Architect explains every menu, tool and possible button-press in clear, concise terms. There's a lot to learn and, ultimately, memorize, so I found myself using the pause, rewind and restart buttons a lot. If you've ever followed a guide on YouTube, this back-and-forth reference process will be all-too familiar. 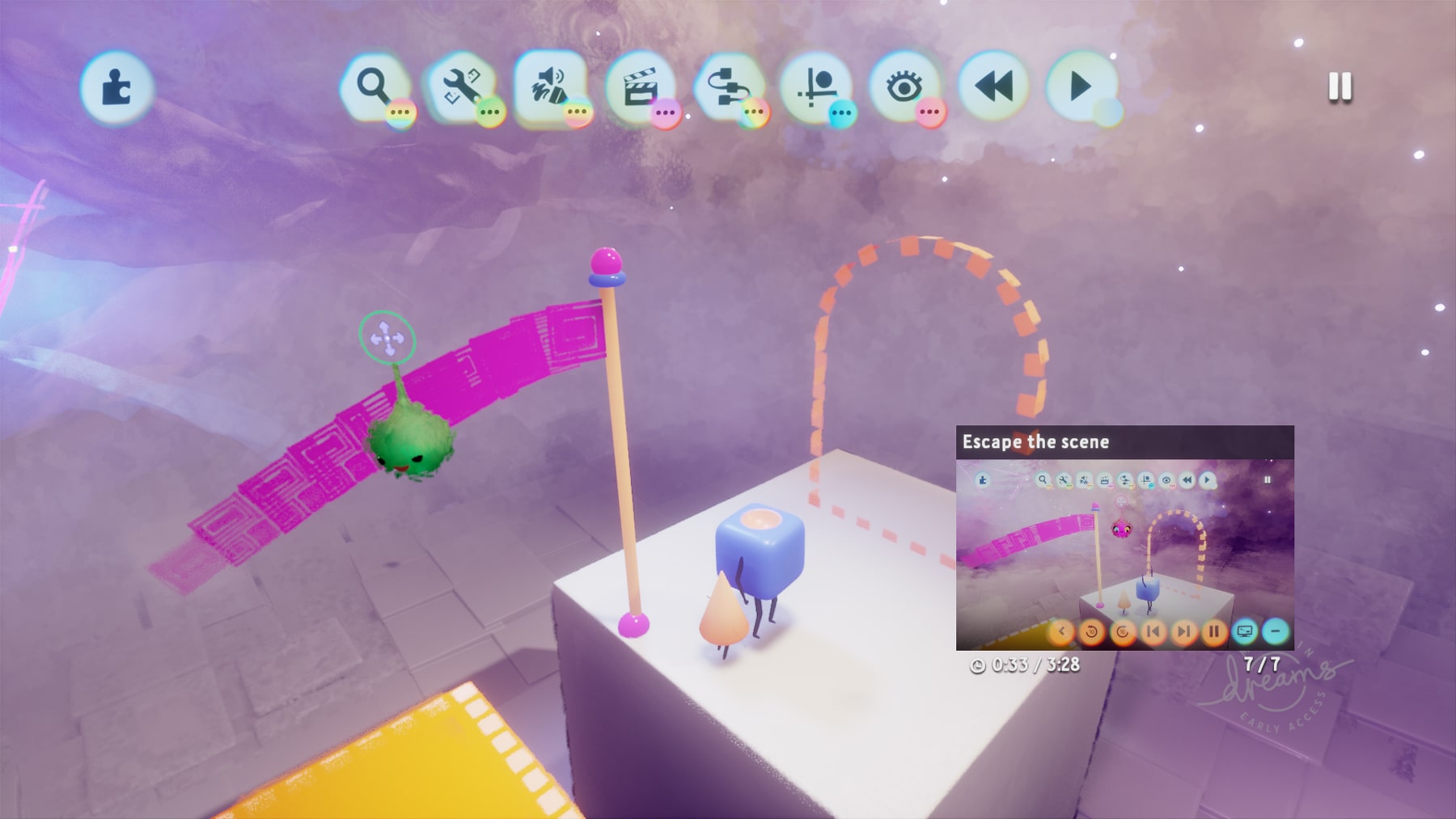 The basic controls are easy enough to grasp. The left stick moves the camera on a two-dimensional plane (forward, backwards, left and right) while the right stick tilts it up and down. Holding the L1 button will modify the left stick so you can move the camera's position vertically.

You also have a colorful "imp" to select objects and menus, like an on-screen cursor. It's tied to the accelerometer on the DualShock 4 controller, which quickly loses its position and, therefore, needs to be re -centered constantly. I'm not sure how Media Molecule could have side-stepped this problem, though, without releasing a mouse peripheral for the PS4. If you own a pair of Move controllers, I suspect they're a far better option.

The rest of the control scheme is surprisingly intuitive and makes good use of the DualShock 4's buttons. You can hold R2 to grab an object or lightly feather the trigger to make some finer adjustments. Triangle is delete , circle removes the current tool attached to your imp, and the left and right directional arrows serve as undo and redo buttons. Of course, the DualShock 4 has fewer buttons than a traditional mouse and keyboard and is, therefore, an imperfect way to control such an advanced piece of software. Media Molecule gets around this with contextual menus and the L1 button, which modifies almost every other input on the DualShock 4. It's not perfect, but I was surprised by how quickly everything clicked. 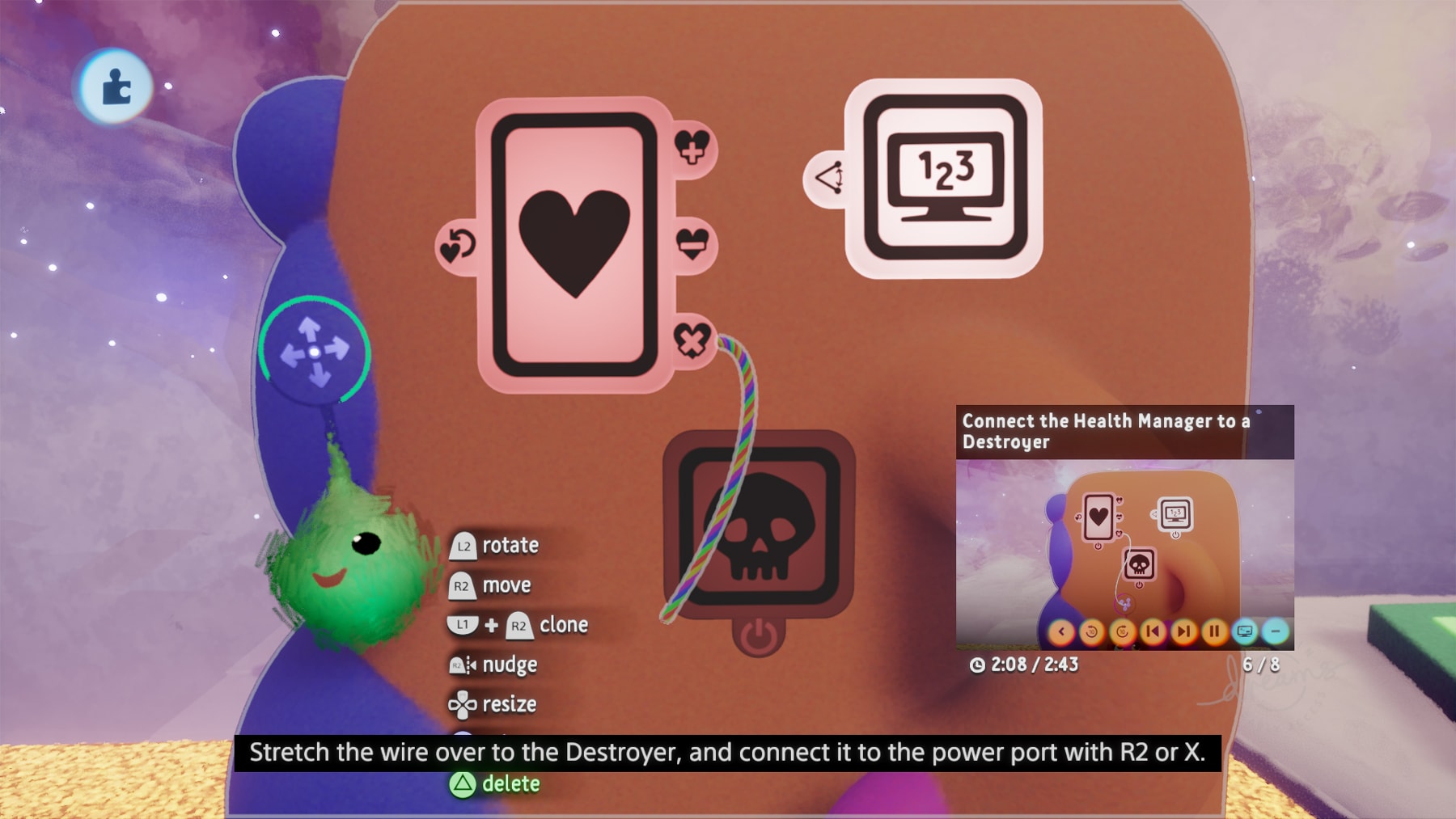 Before too long, I was learning how to scale, rotate and clone any object in my arsenal. Then the tutorials explained how to use its version of logic to create death zones, checkpoints and health systems. Within a few hours, I had all the tools necessary to make my own rudimentary 'dream.'

For inspiration, I checked out some community creations. I knew the public had already created some jaw-dropping worlds, including a homage to Dead Space, during the private beta earlier this year. But I was floored by the breadth and quality on offer. The platform is already brimming with driving games, shooters and cinematic vignettes of fictional places.

I found a close-to-complete recreation of P.T., the beloved teaser for Silent Hills that was designed and directed by Metal Gear Solid creator Hideo Kojima . Dreams then suggested a surprisingly accurate version of the first Mario Bros. level and a half-finished Kokiri Forest from The Legend of Zelda: Ocarina of Time. To my great surprise, someone had even started a revival of PlayStation Home, the social space that was launched and eventually shuttered on the PlayStation 3. There wasn't much to see or do -- a bowling alley was the only real attraction -- but I was still impressed with the detail and effort that had so clearly been spent putting it together. 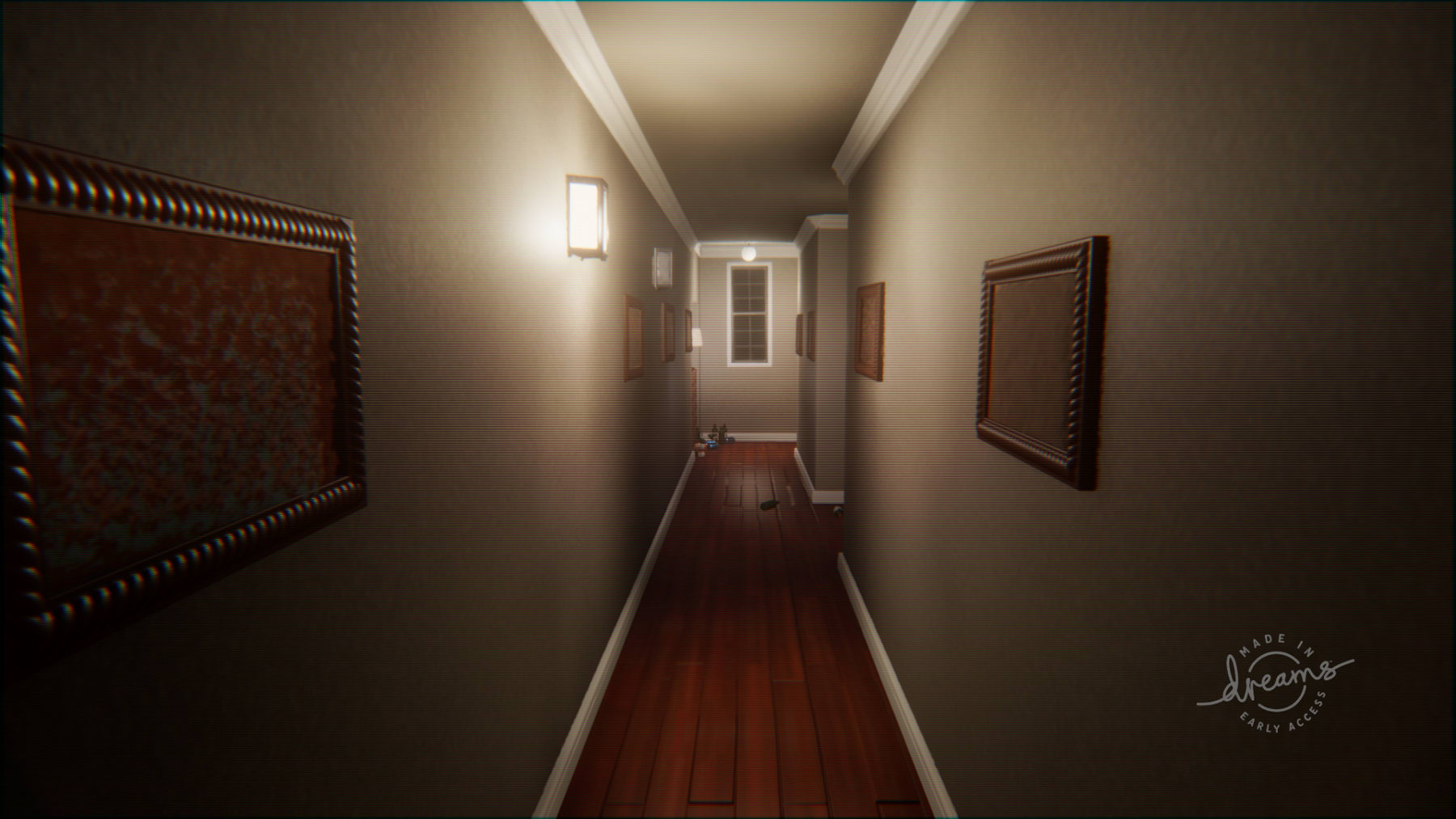 Okay, it's time for a small confession: I haven't started my own dream just yet. I still have some tutorials to finish and want to remix other people's worlds before building one from scratch. With Dreams, though, I'm confident that I'll stick with the software and build something worth sharing. And that's a big deal -- I'm usually the kind of person who ignores the level editor entirely and gobbles up everything the community has made instead. With Dreams, I'm finally committed to being a creator as much as a consumer.

Right now, Dreams doesn't have a story mode (hence why it's called a Creator Early Access). In a blog post, Media Molecule's Siobhan Reddy said it will be included in the full release which, for now, still doesn't have a firm date. That piece will be critical, I suspect, to attract people like me who usually avoid level editors. Even in its current form, though, Dreams is undeniably impressive. Media Molecule has crafted a game engine that is both approachable and complex enough to deliver truly breathtaking worlds. I can't wait to see what people build with it.

Update (05/01/2019): An earlier version of this article described Dreams as "accessible." For clarity, we have changed the wording to "approachable."