Nintendo Game Boy at 30: As fun as it ever was

Today marks the 30th anniversary of the Game Boy's release in Japan. Three decades ago, the portable gaming landscape would change forever. Whether you owned a Game Boy or not, it's likely something you're familiar with. The legacy reaches far beyond a retro gaming handheld. Three Engadget editors share their personal favorite version, and why it matters to them. I remember like it was yesterday. It was 1991, and I had my nose pressed up against the glass outside a branch of Dixons, on Park Street in Bristol (England). I was staring at a revolutionary new handheld console that would change gaming as we know it: the Atari Lynx II. At least, that's what I thought at the time. History would prove me wrong. So very, very wrong. 30 years ago, the real pioneer of gaming handhelds -- Nintendo's Game Boy, of course -- was released in Japan. It had even been around in the UK a while before my uninformed beak was smudging up windows of big box electronics stores. (The Game Boy came to the UK in 1990.)

Despite choosing the Lynx, I almost instantly knew I'd made a mistake. All the other kids in my class, bar one, made the right choice (Dave Galloway, the other Lynx owner, and I soon became close friends). The playground soon changed from scrappy games of football to pockets of kids gathered around someone playing Tetris, or maybe two people playing Tetris against each other. Dave and I were elsewhere playing two-player California Games (which is amazing, FWIW).

I loved the Lynx, but it was hard not to envy the endless stream of new and exciting titles for the Game Boy. Or its impressive battery life and actual pocket-friendly size. Atari went after superlatives (first color portable! 16-bit graphics!) and tried to squeeze an (80s) arcade into a small box. Nintendo took a totally different approach, knowing that handhelds required boiling things down to the basics, and focusing on the gameplay. Atari's portable had all the graphical power, on paper at least, but somehow, the worlds created on Nintendo's green dot-matrix baby looked more inviting and skillfully drawn for the limited display. Not shoehorned down from an arcade machine. 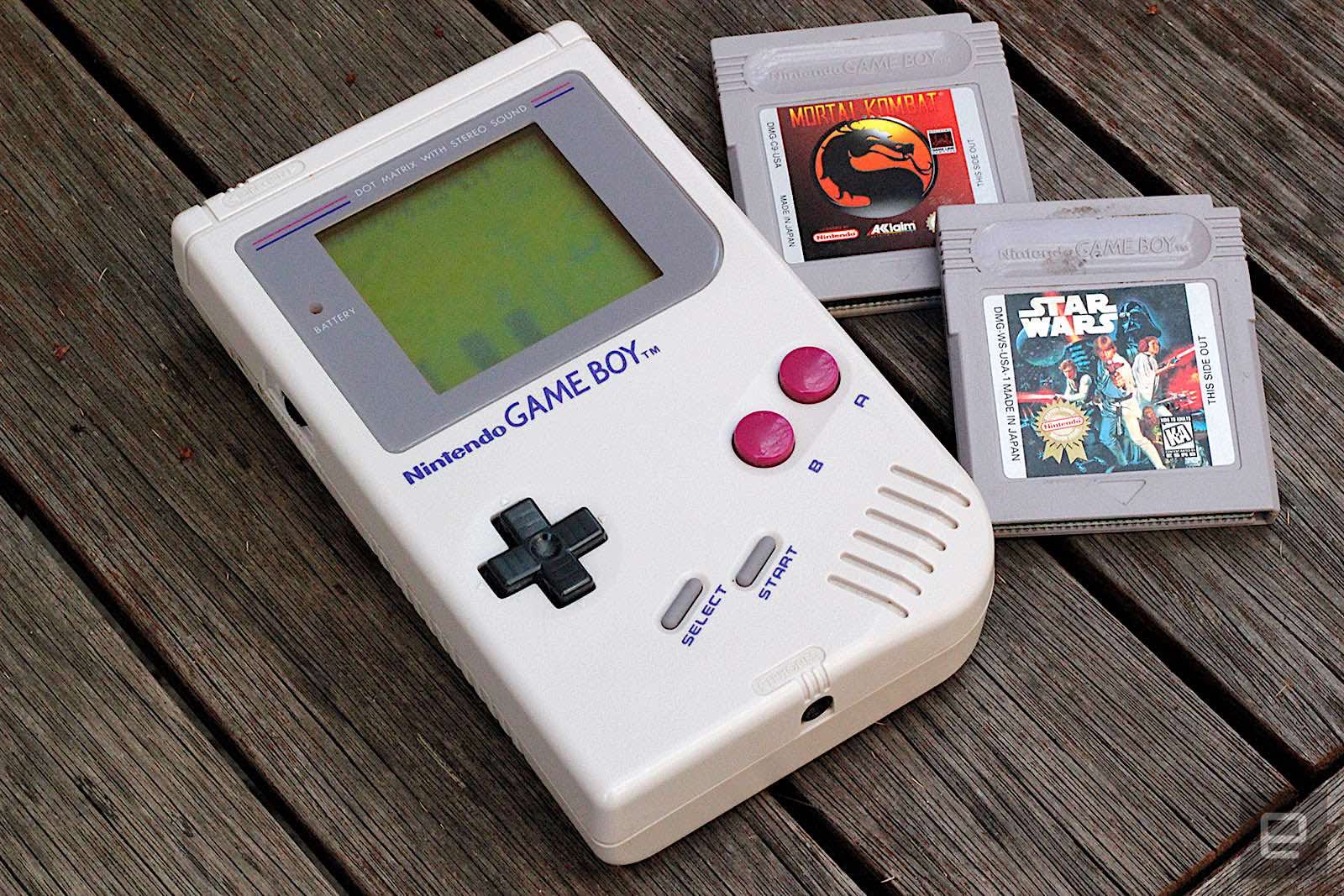 Thirty years later (for this story), I righted that wrong, and bought an original Game Boy on eBay. It cost me about $40, and came with Mortal Kombat. It's in surprisingly good condition for something older than some of my colleagues here at Engadget. It works just fine, and the two-tone bootup chime still stirs a tinge of jealousy, even though this one belongs to me.

But nostalgia is always rosy. The moment Mortal Kombat loaded up, I was instantly reminded of the Game Boy's Achilles heel: that small, fuzzy, squint-inducing display. Even in the middle of the day, I found myself struggling to focus on the gray-and-green image before me, occasionally finding myself focusing on my reflection and not the game. I thumbed for the contrast wheel, hoping that I could gently roll the image into clarity, but it basically seesaws between all black, all green and usable. How did we tolerate this? Because it was 1990, and nothing beat the satisfaction of slamming a much-needed "straight" into the perfect gap for a Tetris.

As much as I struggled with that display -- hardly surprising after 30 years of LCD and OLED development -- one thing remains true: the games are still pretty cracking. I wanted to enjoy the true Game Boy experience so I also shelled out for a copy of Super Mario Land (and Star Wars, for no reason other than it was a deal). Both of these games somehow seem to have more depth than their nearest rivals on the Lynx. Game Boy titles draw you in with simple graphics, clever gameplay and cute, creative worlds. The Lynx was more about high scores or button-mashing (not entirely, but given there are only about 70 games, there's not a massive variety).

As much as I am enjoying the Game Boy, I realize (in hindsight) one clear benefit of the Lynx, at least if you're a collector type like me. The small library is pretty easy to pick up, and there's enough rare stuff to keep things interesting once you do. The Game Boy, with its vast library (and Japan-only releases) and cacophony of accessories and special editions would be maddening to collect. Of course, these are small consolations and a long time coming. For the last three decades, it's always been the most fun to play overall, and that's what really counts. Man, I loved my transparent Game Boy Pocket. Wave Race, Grand Theft Auto, James Bond 007 -- I rammed each cartridge into my handheld and didn't stop playing until the credits rolled. There was one title, though, that I could never quite beat: Metroid II: Return of Samus, a 2D action-adventure by R&D1, the fabled development team behind Donkey Kong and the original Mario Bros.

I remember the game feeling absolutely enormous. Samus' quest took place in a subterranean labyrinth that was seemingly impossible to navigate without a notepad and pen. The scale was daunting, yet utterly mesmerizing. I could spend hours sprinting through its cavernous corridors, looking for items and ferocious Metroid monsters to blast. Before too long, I would get stuck and slowly backtrack towards the surface, looking hopelessly for weapons, bosses and areas I might have missed. If a friend didn't have the solution, I would eventually give up and move onto something else.

I returned to Metroid II many times. If I couldn't find a way forward, I simply restarted the game and played the opening few hours again. It was mildly therapeutic until, of course, I got stuck in the same part again.

I never consulted a walkthrough and, therefore, have no idea how much progress I made. To be honest, I'm scared to look even now. I'm not sure what would be worse: to know that I was only a few hours from completion, or that I barely scratched the surface of a tricky but relatively straightforward adventure. Looking at a walkthrough now would also reveal the game's outer limits and, by extension, shatter the sense of wonder and infinite possibilities that R&D1 crafted so perfectly in the '90s.

That same fear stopped me from playing the official remake, Metroid: Samus Returns, on the Nintendo 3DS a couple of years back.

I still have my original Metroid II cartridge in a drawer somewhere, gathering dust. I'll occasionally take it out and admire the tiny artwork, but I never, ever play it. (I wouldn't be surprised if the battery inside the cartridge had died, taking the save file with it.) Deep down, I like that Metroid II ultimately conquered my brain. It adds to the mythos and unrealistic expectations I've built up around the game.

Metroid II is special to me, even if I barely made a dent in its campaign. I got my Game Boy in 1990. As the youngest of four, there weren't many things that were mine; there was my elder brothers' NES, and later their Mega Drive and Saturn. But the Game Boy? That was mine, and I adored it, even if I only had Tetris at first.

Within a couple of years, I had a few more titles -- Tennis, Super Mario Land and Gremlins 2 -- but none of them captured my attention the way Link's Awakening did. I was 8 at the time, and it was a truly formative experience. Anyone at Engadget present for Nintendo's recent Direct presentation can confirm my excitement upon discovering it was coming to the Switch.

I stuck with the Game Boy for a very long time. I've been trying to remember what other games I played -- Alien 3 was definitely a winner -- but mostly just Tetris on the daily.

As time went by, my faithful Game Boy was superseded by all manner of consoles. Of course, I lusted after the Game Gear (4,096 colors!), and I distinctly remember pleading for a Game Boy Pocket when I was about to enter high school. But the one I wanted most was the Game Boy Light. 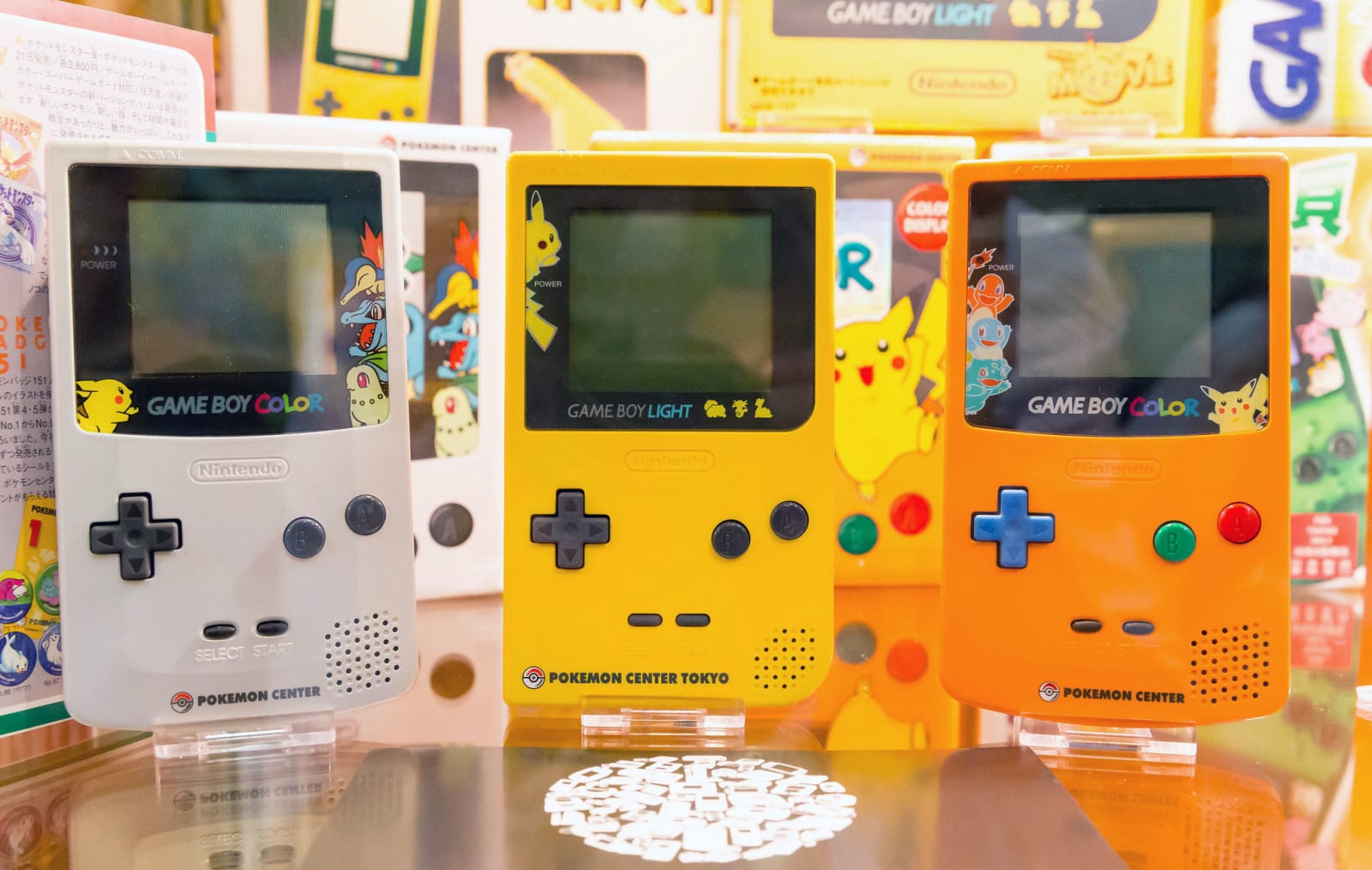 Released only in Japan in 1998, the Light fit somewhere between the original Game Boy and the Pocket in size, but had one thing no other Game Boy had: an electroluminescent display. It was the stuff of legend among kids at school, and for five months or so, I thought of nothing else. Then, the Game Boy Color came out, and I had a new object to lust after.

I picked up a Game Boy Color almost immediately, thanks to winning "letter of the month" in Computer and Video Games magazine in late '98. But it never really captured my attention the way the original did. The Saturn and N64 were basically the only things I wanted to play, and I was already counting down the days until the Dreamcast would hit UK shores (October 14, 1999!). Tetris DX was a pretty sweet companion on the bus, though.

Honestly, until a few weeks ago, I'd forgotten about just how much I wanted the Light. Turns out, I now have a job and some manner of disposable income, and so I decided to have a look through eBay at some hugely overpriced secondhand models. Then, last week, I found it: a limited edition Pokemon Center Game Boy Light, with all of its original packaging. I had to have it. I've probably (okay, definitely), spent more than I should have for a console which I'm unlikely to ever play. But I owed it to the 13-year-old inside me, who I can confirm is ecstatic about the decision.