Buyers upgrading from older cars can get Ludicrous Mode for free.

Unlike most automakers, Tesla has refreshed the designs of its existing cars on rather sporadic schedules, and the latest tweaks for its Model S and Model X are here. Confirming earlier rumors, the flagship sedan and SUV are getting a redesigned powertrain that uses the same "permanent magnet synchronous reluctance motor" and associated technology we first saw in the Model 3.

It uses a permanent magnet motor up front to either power the car or regenerate energy under braking, with an induction electric motor in the back that engages when extra power is needed. Production on the updated versions will start this week at its Fremont factory and buyers can start ordering them online today.

Without increasing the size of the battery, Tesla claims it's improved range, power and torque enough to make for faster 0 - 60 MPH times. The Long Range Model S was previously EPA rated for up to 335 miles on a charge, and now it can go to 370. The Long Range Model X, meanwhile, extends to up to 325 miles. The company took Motor Trend for a drive in one of the new sedans yesterday during its autonomous event and traveled 359 miles from Fremont to LA without a recharge, using 83 kWh and showing 11 percent charge left -- good enough for around 400 miles.

Other changes in the vehicles include "lubrication, cooling, bearings, and gear designs," as well as a fully adaptive air suspension that responds to both road conditions and driving style. According to Tesla, it's also better at keeping the car low while cruising to cut down on wind resistance. Finally, there are also new tire designs on "certain variants."

The new cars won't quite match the Model 3 for speedy charging, but updates there allow for up to 200 kW charging on its new V3 Superchargers, and 145 kW on older V2 ones, enough to claim that recharging is up to 50 percent faster.

That's no small slate of upgrades arriving -- on the evening before Tesla announces its Q1 earnings results -- and there are a couple of changes to entice buyers that are new or thinking of upgrading. The "Standard Range" option with a lower available battery capacity for a lower price is back, while existing owners of a Model S or X who get a new Performance one can add the $20,000 Ludicrous Mode option for free. 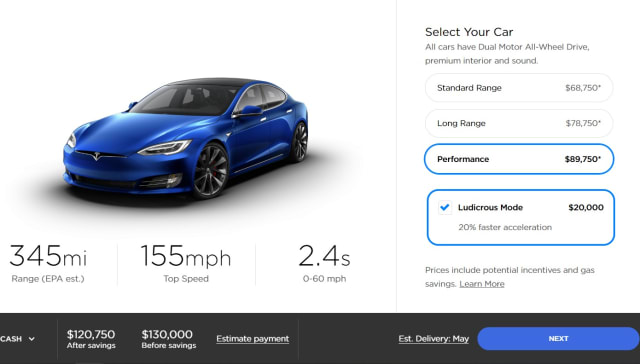 All products recommended by Engadget are selected by our editorial team, independent of our parent company. Some of our stories include affiliate links. If you buy something through one of these links, we may earn an affiliate commission. All prices are correct at the time of publishing.
Tesla's Model S and Model X get new motors with more range
electric vehicle
Elon Musk
ev
gear
induction motor
Model 3
Model S
range
Range Anxiety
reluctance motor
Tesla
transportation