Convenient connectivity is nice, but a few new grill features can be inconsistent.

I'll admit it: I was skeptical that a WiFi-connected grill could really improve my casual culinary exploits. During my review of Traeger's Timberline 850 though, I would discover it's actually very useful -- especially for things that take several hours to cook like pulled pork, brisket and ribs. With its 2019 lineup, Traeger extended that WiFi tech to all of its new grills instead of reserving it for the premium Timberline Series. At $1,200, the new Ironwood 650 still isn't cheap, but it offers a lot of what the more expensive Traeger grills do while saving you a few hundred dollars. 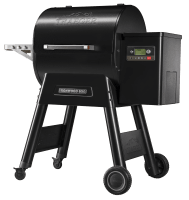 Although Traeger first introduced its so-called WiFire technology on the Timberline Series in 2017, it wasn't the first to build a connected pellet grill. The likes of Rec Tec, Green Mountain Grills and others make similar options that also send real-time info to your phone. Until a few weeks ago though, in order to take advantage of the connectivity on a Traeger grill, you had to buy one of its most expensive models. Now, you have choices. And at $800, the most affordable option is less than half the cost of the cheapest Timberline.

The Ironwood Series is an entirely new model for Traeger. Price-wise, it sits between the more affordable Pro Series and Timberline. As with most grills from the company, the Ironwood comes in two sizes, the 650 and 885, with the model numbers corresponding to the cooking area (i.e., the Ironwood 650 has 650 square inches of cooking space). In terms of features, the grills are exactly the same, the only difference is how much food you can cram inside and the overall size of the cooker itself. 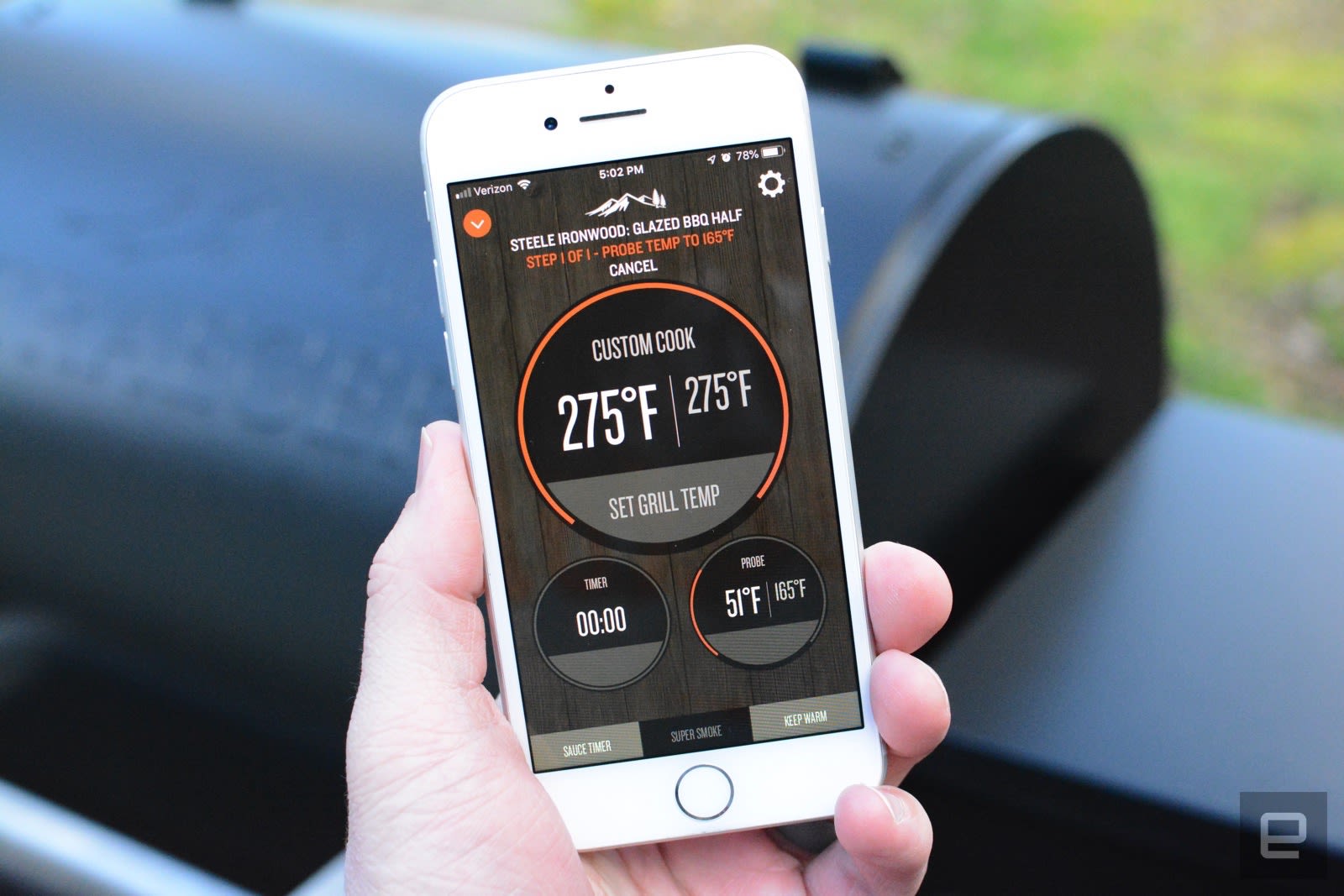 Though it costs significantly less, the Ironwood Series still has a lot of handy features that debuted on the Timberline Series. For one, it connects to the Traeger app, your complete guide to grilling. It not only controls and monitors the grill, but it's also home to a library of recipes. Once you select one, you can beam the temperature and timing info to the grill from your phone -- saving you the hassle of going outside to manually turn the dials.

Indeed, the Traeger app will allow you to adjust temperature, set either a timer or sauce timer, adjust the meat probe's target temp, turn on the Super Smoke mode and push the Ironwood into a handy Keep Warm state. All of those are great, and you'll use them a ton, but there are some things you can't do with the app.

First, you can't use it to turn the grill on, and even if you could, that would require you have it plugged in at all times. That isn't how I store an outdoor appliance when I'm not using it, and I'd guess most people don't either. Second, you have to be at the grill to push the "Ignite" button to light it. Even if you send all the temperature details from the app, you can't do this step from afar. Of course, this is all sorted at the start, and once you're actually cooking, you can kick back and relax from a distance. Just in case your hands are full when you head inside, you can initiate the shutdown cycle -- which takes about 15 minutes -- from the app over WiFi. This doesn't turn the grill completely off, but it does at least start the process by keeping the fan going to help cool things down and to ensure any remaining pellets in the firepot are burned.

You can keep tabs on what you're cooking even when you leave home. I never left the Ironwood 650 completely unattended (my wife was home), but I did run to the store to pick up ingredients I'd forgotten. From the checkout line, I was still able to monitor both the temperature of the grill and the status of the meat probe with ease. I've also used the Ironwood 650 to cook Boston butts (for pulled pork) and brisket overnight. I don't do it often, and it still makes me nervous, but for things that take eight to 12 hours to cook, an overnight session can be essential. Especially if you need the meat ready to eat in the afternoon or early evening. Then, it's nice to check on things without having to get out of bed on a cold morning. 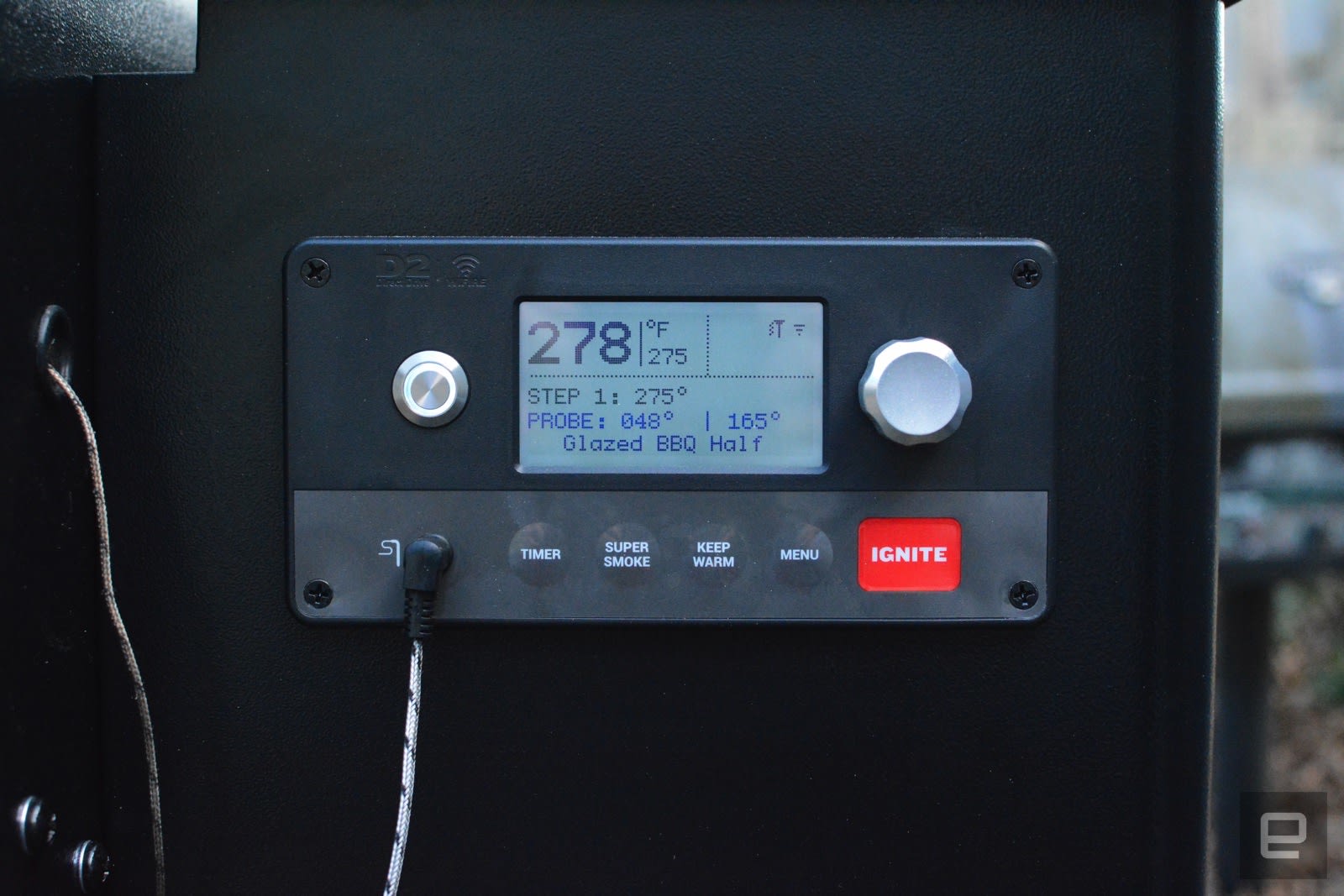 WiFi is great and is super handy for long cooks, but another much-hyped feature on the Ironwood 650 is Traeger's new D2 Direct Drive. The company says the combination of a redesigned fan and auger system generates optimal smoke production and creates more wood flavor, even at higher temperatures. Part of that D2 system is a tool called Turbo Temp. Basically, Turbo Temp allows the grills to get hotter faster, and it helps recover from temperature changes -- like when you open the lid to spray, mop or sauce.

I still have the first-gen Timberline 850 in my backyard, so I was able to test Turbo Temp side-by-side with the older grill that doesn't have the new D2 Direct Drive system. The results were disappointing. On a day in the low 70s, for example, the Timberline 850 took just under 15 minutes to go from off to 225 degrees (a common smoking temperature). After 30 minutes, the Ironwood 650 was still at 200 degrees. Sometimes it comes to temperature impressively quick, and others it takes up to 30 minutes. The Ironwood 650 also takes almost four minutes longer to ignite, which was pretty frustrating. Given that D2 is a key selling point on new Traeger grills, it's disappointing that it doesn't work consistently as advertised.

Traeger explained that performance of the D2 system depends on several factors, including ambient air temperature, altitude, pellet type and pellet condition. Of course, it also matters if you're starting with a clean fire pot. I monitored how long it took to ignite and come to temperature several times -- some with a clean grill and a brand-new bag of pellets, and others when the grill had been used once and pellets sat in the hopper for a day or two. The results were pretty consistent with what I mentioned above: an average of seven minutes to complete the Ignite cycle and around 25 to 30 minutes to hit a target temperature of 225.

However, the D2 setup's faster recovery does work well. The Ironwood 650 got back to temperature noticeably faster after I opened the lid to visually inspect things or sauce whatever I was cooking. Once the grill got going, it worked well. But for a redesigned system like the D2, the initial warm-up process should also be consistently quick.

The Ironwood 650 has a similar pill-shaped design as the Timberline Series. That construction allows for a more efficient use of space, and you can fit a lot of food on the two shelves inside. Both are removable, so if you have something taller to cook -- like a turkey or beer-can chicken -- you can easily fit it with a quick adjustment. The Ironwood 650 also has a side shelf similar to the Timberline grills, but it doesn't have the shallow front ledge that's on those pricier grills. It's very small in terms of a shelf, but it does give you something to rest a pan or tray on when you're trying to move things around or wrap ribs. You can get a front shelf for the Ironwood 650, but it will cost you an extra $60.

The Ironwood 650 has a temperature range of 165 to 500 degrees, which means it's much more than a smoker. You can use this for all of your grilling needs, including a combination of smoking and grilling. In other words, you can smoke a big thick steak for an hour and crank the heat to 500 degrees to sear it (a technique known as reverse searing). During this review, I did just that with some ribeye caps, in addition to roasting wings at 400 degrees and several "low-and-slow" barbecue sessions around 225 degrees. The Ironwood 650 handled everything I threw at it and consistently produced tasty food. The smoke ring on a brisket I cooked is one of the craziest I've seen. It looked like it had been painted on the line was so sharply defined. 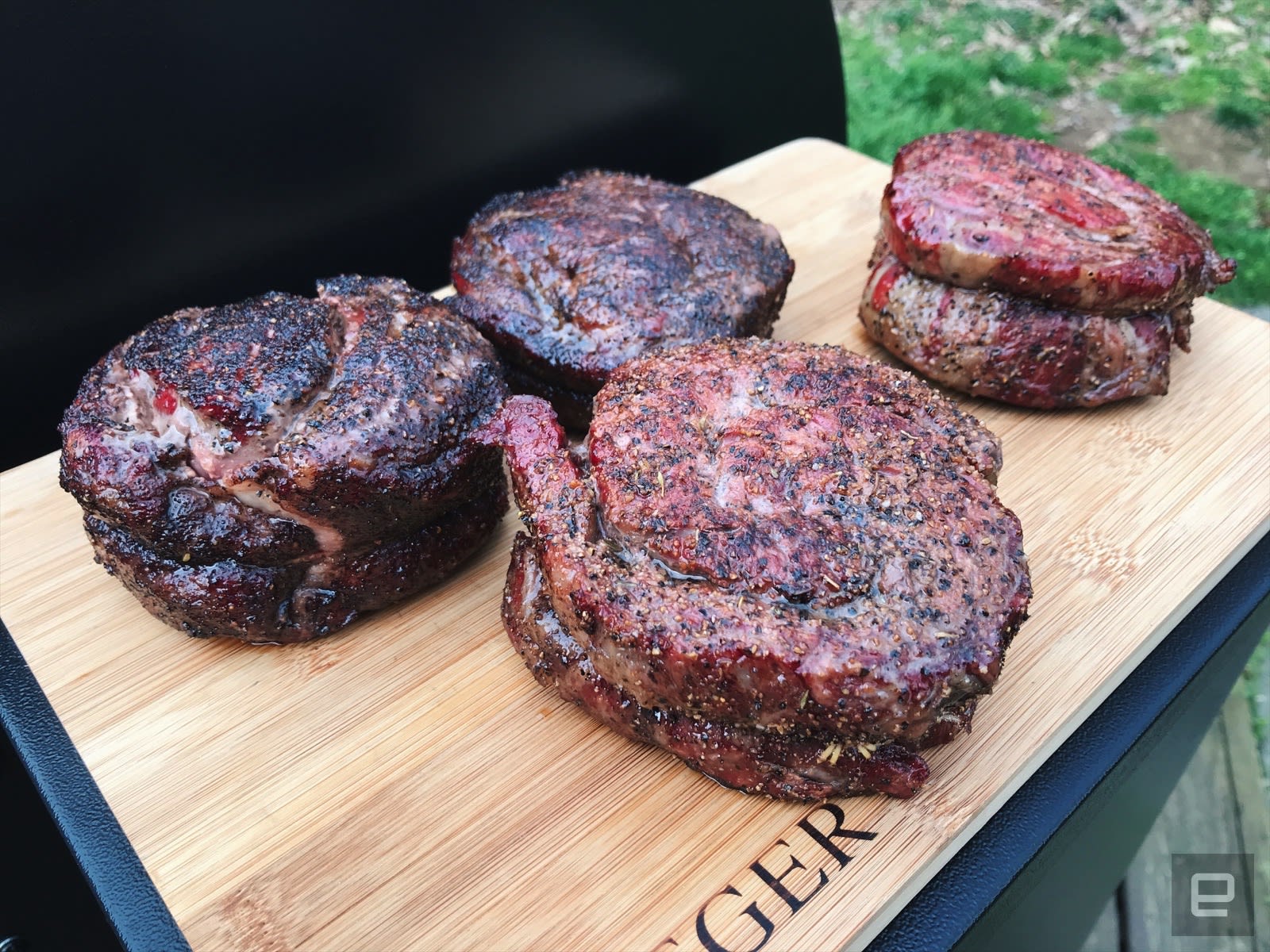 Both the Ironwood and Timberline produce tasty food, but the Ironwood Series is cheaper than the Timberline Series. That means you've got to be making sacrifices somewhere. The main thing for me was the grates on the Timberline slide easily like drawers. That's not the case on the Ironwood grills. The bottom grate does, but it's not nearly as smooth, but the top one doesn't move at all once it's in place -- unless you count completely removing it.

The Ironwood also lacks the pellet sensor found in the 2019 Timberlines that lets you know when you're low on wood and sends an alert to the Traeger app. There are some other design touches that make a difference, too. The lid of the Timberline has an insulated frame to prevent heat loss, for example. These might not be deal breakers, but it's always good to know exactly what you're missing out on when trying to save around $600. 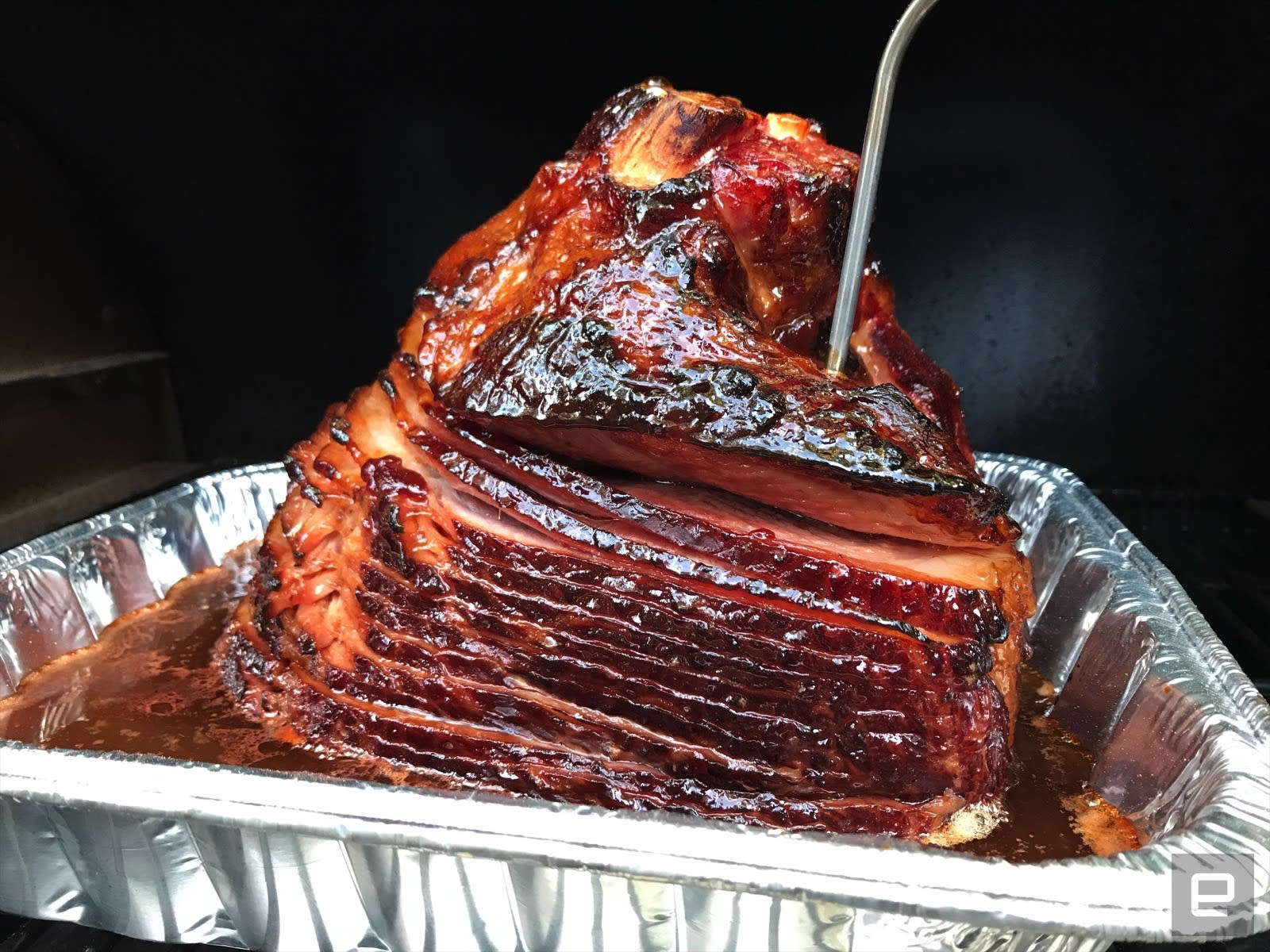 Both of the Traeger grills I've used are easy to clean, but pellet grills in general require a bit more maintenance than a gas model. Every third cook, or after about 20 hours of use, the company recommends that you remove all the grates, drip pan and other pieces covering the fire pot and clean out all the ash produced by burning wood pellets. This can be done quickly with a shop vac, and typically takes me about 15 to 20 minutes. The Ironwood seems to produce a bit more ash than the Timberline, so I've been cleaning it out after two cooks, to keep my food from tasting like charred dirt.

The Ironwood is hardly the only pellet grill in this price range. In fact, there are several options with similar features that are well under $1,000. Green Mountain Grills' Jim Bowie offers the same grilling area and WiFi connectivity for $749. However, it only has one larger grate, though you can buy a second for under $50. Rec Tec's Stampede has 590 square inches of grilling space that you can expand to 772 square inches with an optional second grate/shelf. WiFi is still available here for remote control and monitoring, and the Stampede is $899.

Traeger's own Pro Series is a solid alternative to the Ironwood 650 as well. There are two sizes -- the Pro $800 575 and $1,000 Pro 780 -- and both come with WiFi standard. While you do get the ability to control the grill and keep tabs on things from the couch, you don't get handy features like Super Smoke, Keep Warm, and more that are on the Ironwood or the pellet sensor from the Timberline Series grills. D2 Direct Drive and Turbo Temp are still available on the new Pro Series models though.

You don't need a pricey WiFi-connected pellet grill to develop a backyard grilling or smoking habit. Heck, a well-made Weber Kettle charcoal grill is just $89, and there are plenty of videos that will teach you how to use it as a smoker. While splurging isn't essential, it does make the culinary process much easier -- especially if you're doing a lot of low-and-slow cooking like pulled pork or brisket.

The ability to monitor your grill while not having to physically look at it, and being able to adjust the temperature from your phone, all make Traeger's WiFire grills a solid investment. The Ironwood 650 is a workhorse, but the more affordable Pro Series is solid too. In the end, you'll just need to decide if you're willing to spend a few hundred more dollars for a handful of extra features.