Fifty people (or more) could be in the same digital world at once.

Inside the Future Reality Lab at New York University, there is a cart with 50 headsets on it. It sits by a 10-by-10-foot square that's sometimes used as a motion-capture stage for the lab's offshoot startup Parallux and its ambitious projects in VR and XR (cross reality). The team's latest effort is Cave, which premiered at the Tribeca Film Festival's Immersive Arcade, and uses what Parallux is calling "a new shared XR technology."

Named MASS (Mass Audience Synchronization Solution), the technology enables large-scale shared experiences in AR and VR, so people can see and hear each other in virtual worlds. So far, VR projects have generally been limited to about a handful of people at once, but Parallux has its sights set on far larger numbers. Cave can host up to 16 viewers concurrently, although Tribeca Film Festival's senior programmer Loren Hammonds told me the team actually managed to place 30 people in the experience during a test.

Parallux's chief creative officer Kris Layng said, "We came up with this idea for Cave, which we thought was the solution to a lot of problems that are in this emerging industry right now."

The first issue: You can't scale in VR experiences yet, he said. Existing systems aren't capable enough to handle the massive throughput needed for many people simultaneously. There also isn't yet a way to individually manage members of a large audience in VR. To counter these issues, CEO Sebastien Herscher spent about five years perfecting a system that uses data compression and management that only sends critical information "in a manner that's built to scale up."

Because of this inability to scale, the team believes virtual experiences are alienating and isolating. With MASS, though, the team feels encouraged by the level of interaction they're seeing between audience members. A Parallux representative recalls that at their exhibit in the festival's Arcade, a father with his two children was pleasantly surprised. "He asked, 'You mean I can see my kids inside?'"

Cave is proof that MASS works. It's a short animated film that transports you to 10,000 BC. The surrounding walls are covered in shamanistic murals. A young woman struggles with a decision she has to make, and seeks guidance from the spirit world. The viewer has no part to play; you're simply an onlooker. But there is a surprise encounter (I won't spoil it for you) that immediately draws everyone's attention to one spot. In both the real and virtual worlds, you'll see audience members turn their heads to look -- my colleague Devindra was on my right as we watched this together, and seeing his generic avatar swivel its head around was amusing. 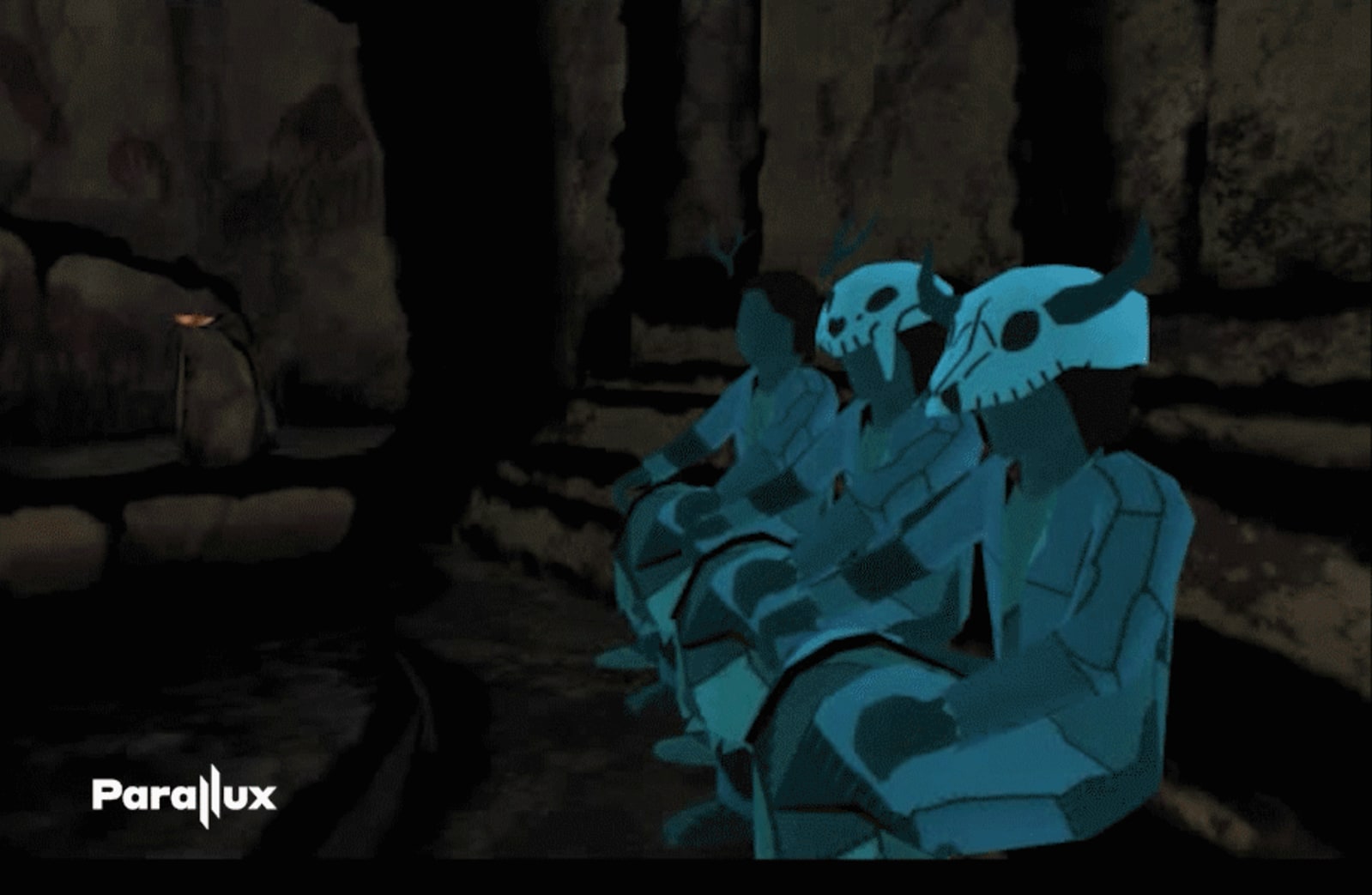 In technical demos, Parallux saw the effect its technology had on viewers. "People were holding hands, whispering to each other; doing things that you would expect people to do at the cinema or a theater," said the company's COO, Gabe Zetter. "But they were all in a shared virtual environment."

The demonstration appeared simple, though, frankly, it could use better animation. Even so, as a proof of concept Cave is compelling. Not only can you interact with a large group of people inside a virtual world, but the creators also have the ability to customize your virtual point of view. In another demo, Herscher placed Devindra and I at different spots in the cave, facing each other instead. With more work, Parallux could have even greater control over individual viewer storylines, even.

The implications here are massive. Imagine going to the theaters not to watch a movie but to be part of a VR experience with 49 other people. With the slow adoption of headsets in consumers' homes, location-based and group VR is more likely to reach a mass audience, at least for the short term. Instead of having people wait in line to put on a headset for a solo adventure that lasts just a few minutes, we could take part in longer, larger scale events. Parallux has ambitious goals. As Herscher said, "We're not at all stopping at 50, we're aiming to go much larger than that."