You're going to see Android Q's new gestures all over the place.
C. Velazco|05.10.19
@chrisvelazco

At last year's developer conference, Google gave us our first taste of Android Pie's gesture-based navigation system. It was, uh, pretty rough: the classic, three-button navigation scheme was replaced with a back button, a "pill" and a handful of swipe gestures that, to me at least, never felt particularly elegant or natural. Thankfully, Allen Huang, Google's product manager for Android's system interface, explained it was always meant to be a transitional step and never meant for it to last "in its current form" for more than a year.

That's a big deal because, as Huang himself concedes, asking users to re-adapt to the fundamentals of a newly updated phone is pretty lousy. Muscle memory sets in, people get used to a system's quirks and life goes on... until the next time Google changes how Android navigation works. And yet, that's exactly what the search giant did with this year's Android Q release: you can either run with those classic Android buttons or embrace a brand new, no-buttons-involved gesture system.

For now, at least, the only real action that seems missing in the public Q beta is a way to activate Google Assistant. Sure, if you have a Pixel, you can use Active Sense, and everyone else can say "OK, Google." In future Android Q builds, though, you'll also be able to swipe diagonally inward from the bottom corners of the screen to launch Google Assistant. In the non-final build running on Huang's own Pixel, this motion is signified by a bar of Google-y colors swelling out to stretch across the bottom of the screen.

Even in its not-quite-finished form, these new gestures feel like a huge improvement over the mixed bag that shipped with Android Pie. According to Huang, the similarity to Apple's gestures was a curious case of convergence in design. Since phone screens only have two sides and a bottom and Android has four main navigation actions (go home, go back, view recent apps and activate the Assistant), there were only so many viable gesture options to work with. It might seem familiar, sure, but the system Google has landed on makes sense in a way that last year's gestures didn't. 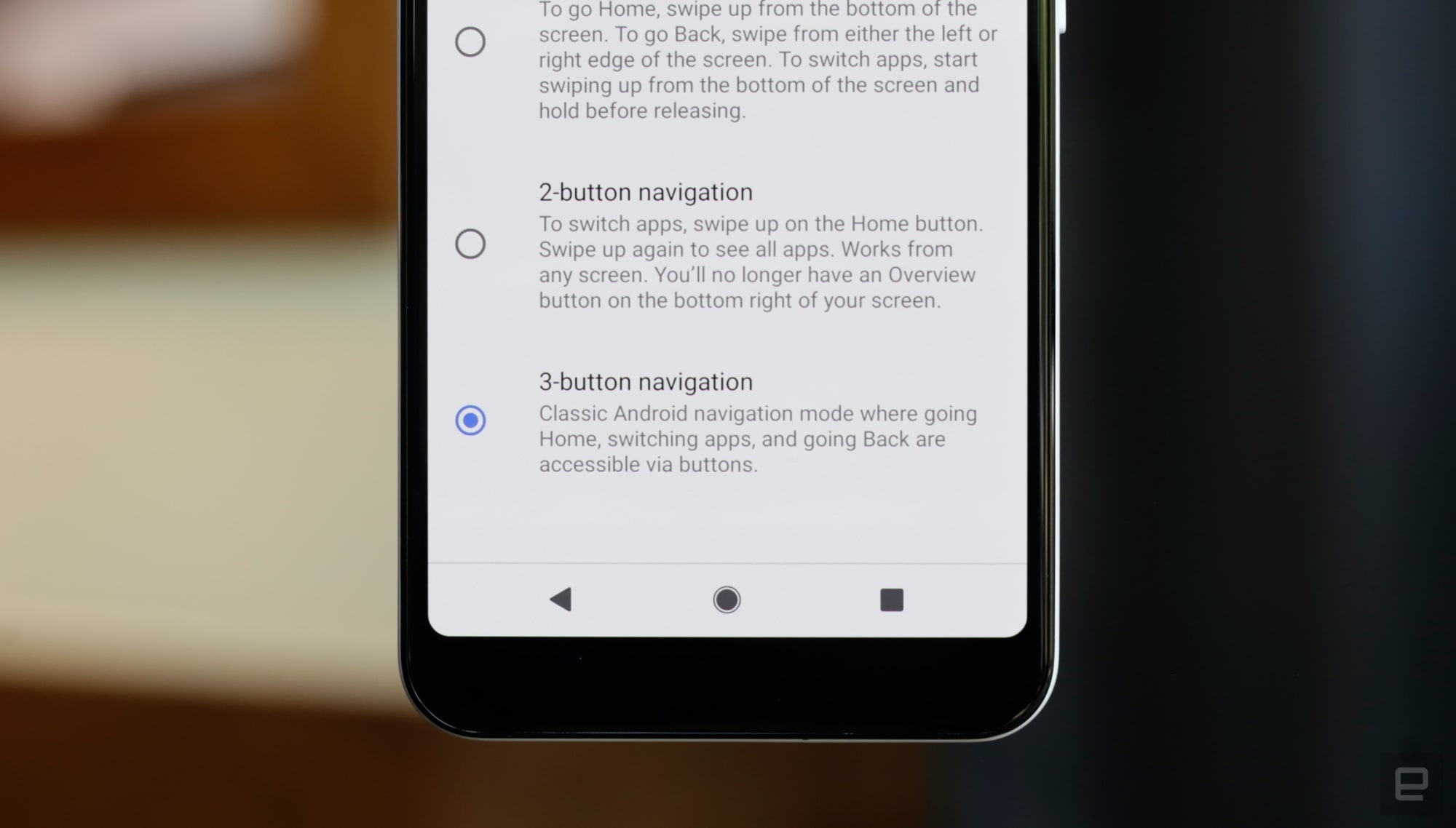 To make the act of using Android feel as universal and consistent as possible, device makers like Samsung, Huawei, LG and the rest will have to offer these navigation systems on new phones, even if they've developed their own gesture interfaces. If you already have an Android phone that you eventually update to Q, your navigation system won't change by default. (For now, that seems like the only way to keep the gesture controls that debuted with Android Pie.)

The benefits to this approach are pretty clear: if you ever switch Android phones post-Q, you probably won't face a steep learning curve as you get acquainted with your new device. And by ensuring that all new Android Q devices have the new gesture navigation, Google is making it so that devices with smaller screens don't feel nearly as cramped. That said, most phone makers of note have already cooked up their own gesture navigation systems in response to the (lackluster) option available in Android P, and the last thing Google wants to do is take that option away from users.

The company will strongly "encourage" its hardware partners to embrace Android Q's navigation schemes, but the Samsungs, OnePluses and Huaweis of the world can continue to make custom skins with custom gesture interfaces for people who really want to use something different. The catch, according to a Google spokesperson is that those companies have to offer Google's gestures right out of the box if they want to include some custom gestures.

Huang said the reason for this push to standardize navigation is because of app developers: their job gets infinitely more difficult if they have to worry about how different swipe gestures performed inside apps gets misinterpreted as something else. By insisting on one (or two) main modes of interaction, Google is trying to take some of the load off developers who might otherwise have to design their software with specific devices in mind. As far as Huang is concerned, that doesn't lead anywhere good.

"If everyone does their own thing, Android apps are going to get worse," he added.

And to be clear, Google hasn't just sprung this on its hardware partners this week. According to Huang, the company reached out to major phone makers well in advance, and some OEMs have specifically asked Google to develop standard Android gesture controls. Well, wish granted, whoever you are.

With Android Q's summer launch getting closer by the day, Google doesn't have much time left to iron out the early issues with its new gesture controls. Based on what I've experienced in the last few days, though, Google has taken some significant steps forward when it comes to the ease and quality of interacting with Android. That's only going to become more important as it tries to connect with its next billion users, so here's hoping the coming months are well spent.