Three days in, life with the Android P beta has been mostly painless

Not every feature is ready, but it's a surprisingly strong start.

The first public preview of Android P is finally here, and as you might have guessed from the jam-packed keynote, there's a lot going on in this new build. As Google tells it, Android P is centered around intelligence, simplicity and what the company refers to as "digital well-being." All together, those themes represent the most compelling case we've heard for Android in years. This is beta software, though, so you probably shouldn't install this build with the intent of using it as your daily driver. Not everything works the way it's supposed to, and reverting to good ol' Android Oreo requires you to flash a factory image onto your phone. That said, since there's a pretty good chance you're probably going to take the plunge anyway, I'm pleased to report that life with Android P has been more pleasant than painful.

Before we go any further, a quick note: While there are some big changes evident in the Android P beta, quite a few of the tweaks and additions Google announced during its I/O keynotes aren't available yet. That includes nearly all the digital well-being features meant to help you better understand how you spend time with your phone. It's a bummer, I know, but if history is any indication, the complete version of Android P is only a few months away.

As you might have heard, Google has embraced a new, gesture-based navigation scheme in Android P, but you'll have to jump into your device's settings to enable it. Once that's done, it's time to give in. A swipe up from the bottom of the screen reveals Android's new multitasking interface, which displays running apps as a row of cards you can quickly swipe through. Hold down the nav bar, though, and you'll be able to slide through those app cards (complete with satisfying haptic clicks) without having to lift your thumb. It takes some getting used to, but I've become fond of this swiping method over the past few days -- it's a little touch that makes multitasking ever so slightly faster.

Another swipe up from the bottom of the screen invokes the traditional app launcher, but if you swipe a little more slowly from the home screen, you can bypass the multitasking window altogether. Google's approach here has drawn some obvious comparisons to the iPhone X's gesture controls, but make no mistake: This is a different beast. Personally, I find it more reminiscent of Palm's old webOS, but that might just be me. 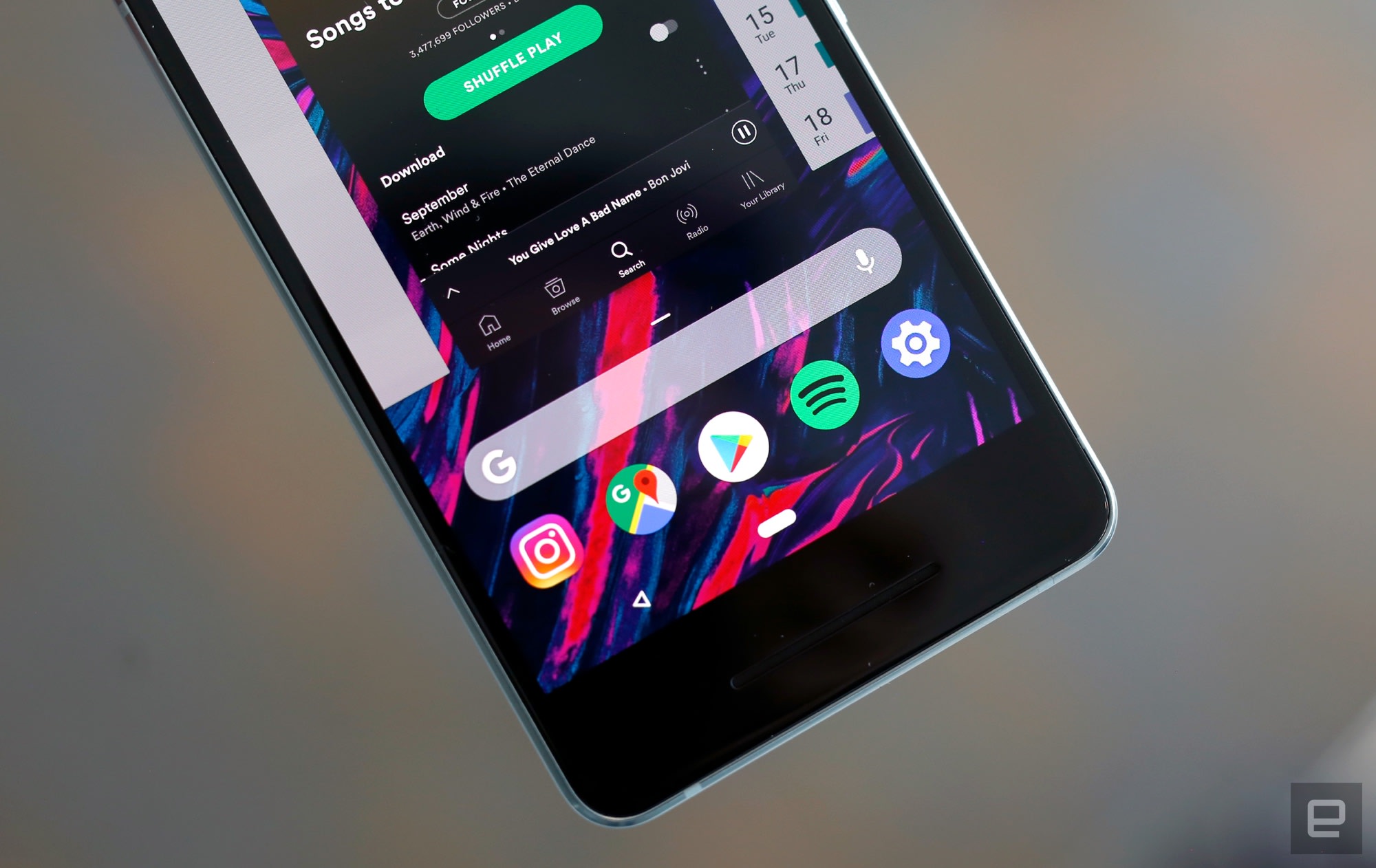 After that initial flush of novelty wore off, though, I found myself growing frustrated with some of Google's decisions. The new nav bar takes up just as much space as the older one did, so don't expect to gain any extra millimeters of screen real estate. The lack of a Recent Apps key in this new layout also means you can't jump back into your previously used app, a feature I didn't anticipate missing until it was gone. (Update: I'm an idiot, and you can in fact jump back in your most recently used app by by swiping right on the new home/pill button. Sorry for the mistake, I regret the error.) I've spent the past few days trying to reset my muscle memory, and it's clear this will be an adjustment for longtime Android users, even if it feels like Google is mostly on the right track.

After years of being little more than a list of apps, the app launcher now has a more thoughtful design. At the top of the screen you'll find a Google search bar and a row of apps your phone thinks you may want to use. After using your beta phone for a little while, you'll start to notice something new beneath those suggestions. Google has been working to break some of the controls for app-specific tasks out of their software shells, and so far these so-called App Actions have been a mixed bag. While I appreciate being able to pick up where I left off in an audiobook straight from the launcher, the OS also thought I might want to call myself. Thanks but no thanks, Google. The company says these new smart shortcuts will appear based on relevance and your usage patterns, so I expect these suggestions to improve over time. Fingers crossed. Triaging the near-constant flow of notifications on your phone has always taken some work, but Android P represents progress on that front. If you're the kind of person who routinely dismisses notifications from the same app without actually clicking into them, Android will now offer to stop showing those notifications altogether. Some apps now also support smart replies -- you know, those canned message suggestions that have been popping up in all kinds of Google services. I've personally never been a huge fan, but they're contextually relevant and convenient if you don't have the inclination to write something longer. Meanwhile, a "manage notifications" button will appear at the bottom of the shade. That takes you straight into your notification settings so you can more easily customize how and when these things appear.

Android's volume controls have been improved too. The slider that appears next to the volume keys when you clicked controls media volume by default, and there are shortcuts to your device's sound settings and a mute button for good measure. I can't begin to keep track of all the times one of those would've been handy. And if you're really trying to be discreet, the updated Do Not Disturb mode is going to be your new best friend. Once enabled, it not only prevents your phone from chirping when a notification rolls in but also prevents you from seeing notifications at all, anywhere. Though features like the new Android Dashboard are conspicuously absent, I'm glad beta users are getting at least one wellness-oriented feature that works as advertised.

In day-to-day use, though, few changes are as valuable as Android P's adaptive battery. Long story short, Google is leaning on some clever algorithms to figure out which apps you aren't likely to use anytime soon and turn them off proactively. David Burke, Google's VP of Engineering, said at I/O's opening keynote this week that the company's tests saw a 30 percent decrease in CPU wakes. While I can't specifically test that, my phone's battery life has gotten noticeably better since installing the beta. When I first reviewed the Pixel 2 last year, I could generally squeeze about a full day of use from a single charge. As I write this, it's been close to two full work days since I plugged the phone in and the phone still has about 10 percent left in the tank.

Google's machine learning prowess also underpins the updated Adaptive Brightness feature, though you'll need to put in some time before you notice results. In addition to the usual trick of adjusting the screen's brightness to suit your current surroundings, the device now also takes into account your brightness preferences over time. If you're constantly making the screen dimmer, for instance, Android will learn to cap the display's brightness at a level lower than it usually would. As always, there are plenty of little flourishes here that go a long way in making Android feel more polished and complete. I'm pleased that on compatible devices, Android P shows off how much juice is left in the battery on the always-on display. Grabbing screenshots no longer requires two hands -- just a press and hold of the power button. I'm personally a big fan of the rounded, more friendly look of some interface elements, but to each his own. Tapping the microphone button in the home screen's Google search bar takes you straight to Google Assistant. The list goes on, and I'm sure to discover more after I've used Android P for more than just a few days. Ditto for all the under-the-hood changes going on here. Additions like the ability for apps to access multiple cameras simultaneously and support for apps that use Google's new ML Kit framework are no less important, but for now they're easily overlooked.

Developers will get a few more versions of Android P between now and its official launch, and frankly, I'm a little jealous. This is the most thorough update to the Android experience in years, and I'll take as much time with it as I can get -- even if it's still a little buggy.