Microsoft is evolving by focusing on people

It's delivering what customers actually want and need.

The Microsoft of today would have been unrecognizable just a few years ago. That was clearer than ever at this week's Build conference, where the company once again did its best to court developers. Azure, AI, Edge and Office 365 were all hot topics -- but, surprisingly, the running theme throughout the show wasn't about tech, it was about people. Practically everything Microsoft announced, from adding a complete Linux kernel in Windows to simply bringing Internet Explorer into Edge, was meant to make the lives of both developers and consumers easier.

"I do believe Microsoft is making real changes to focus on what I would call 'technology that solves real problems' versus staring at the amazement of technology that some may not want," said Patrick Moorhead, the president and principal analyst of Moore Insights & Strategy. "This is a pragmatic shift and I know goes all the way up to Satya. Apple for consumer markets has been good at this and Google is getting better at this but still has some tech for tech's sake." 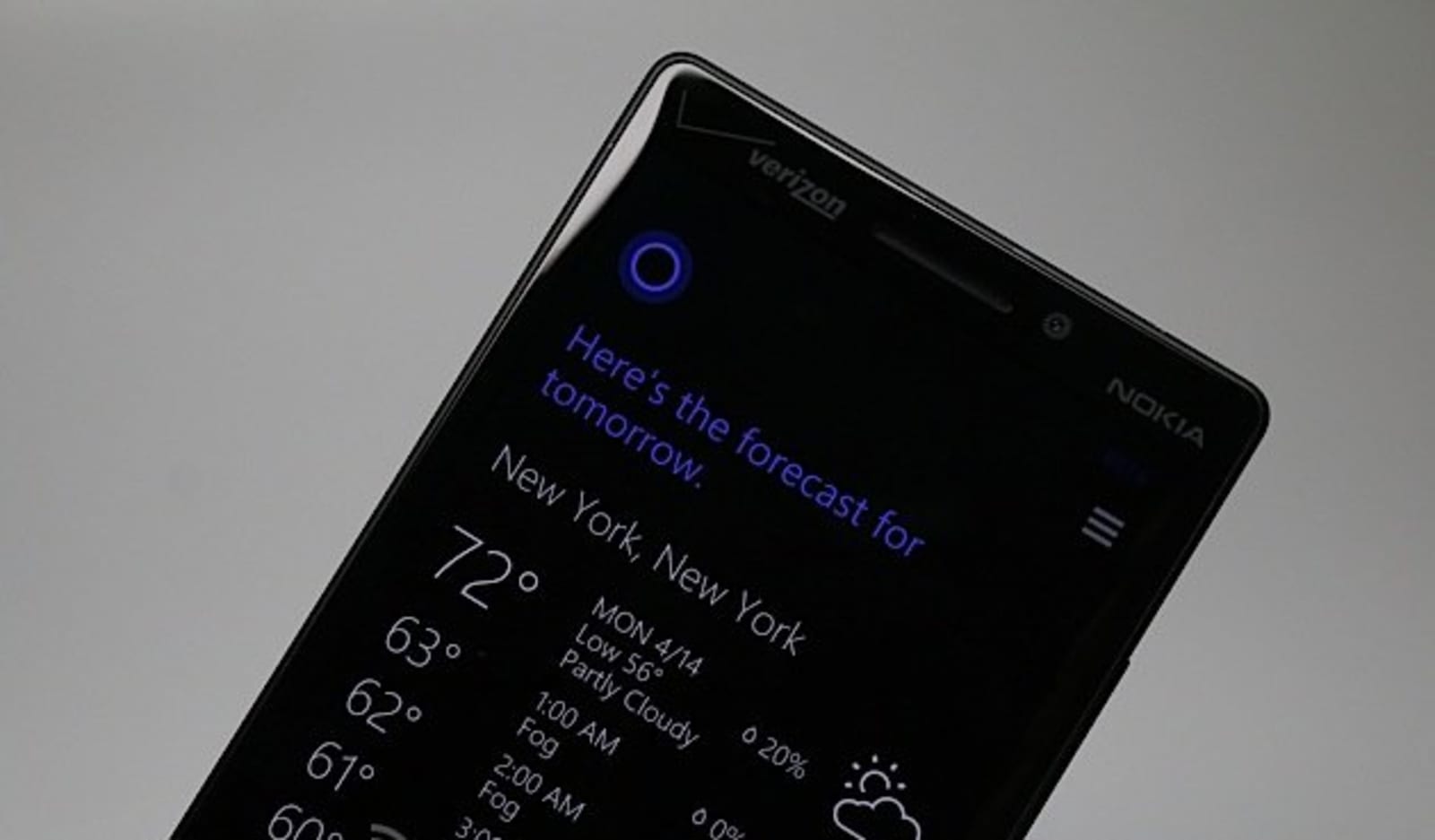 Rewind five years and things would have seemed very different. Windows 8 was forcing a tablet-focused touchscreen interface on an audience that just wanted the desktop they were used to. Windows Phone was still alive and kicking, trying to make a late dent in mobile, long after iOS and Android cemented themselves as the leaders. The Xbox One was being trounced by the PlayStation 4, forcing Microsoft to release a cheaper version without the under-utilized Kinect sensor. That was also the year it completed its $7.2 billion Nokia acquisition -- a disastrous move that would lead to a $7.8 billion loss and 7,200 layoffs in 2015. Aside from its growing cloud business, many of Microsoft's moves seemed to be made out of desperation or hubris, without accounting for what its customers actually wanted.

That was the state of the company when Satya Nadella succeeded Steve Ballmer as CEO on February 4th, 2014. Since then, he pragmatically reshaped the company into something that put users first. Windows 10, which brought back the traditional Start Menu, was a free upgrade for Windows 7 and 8 users. Microsoft started heavily supporting iOS and Android by bringing over Word, Excel and Powerpoint, instead of just pushing Windows Phone. Rather than fighting tooth and nail to be the dominant platform -- the basic strategy of '90s-era Microsoft -- Nadella's company was more focused on bringing its products and services to the platforms people actually used. 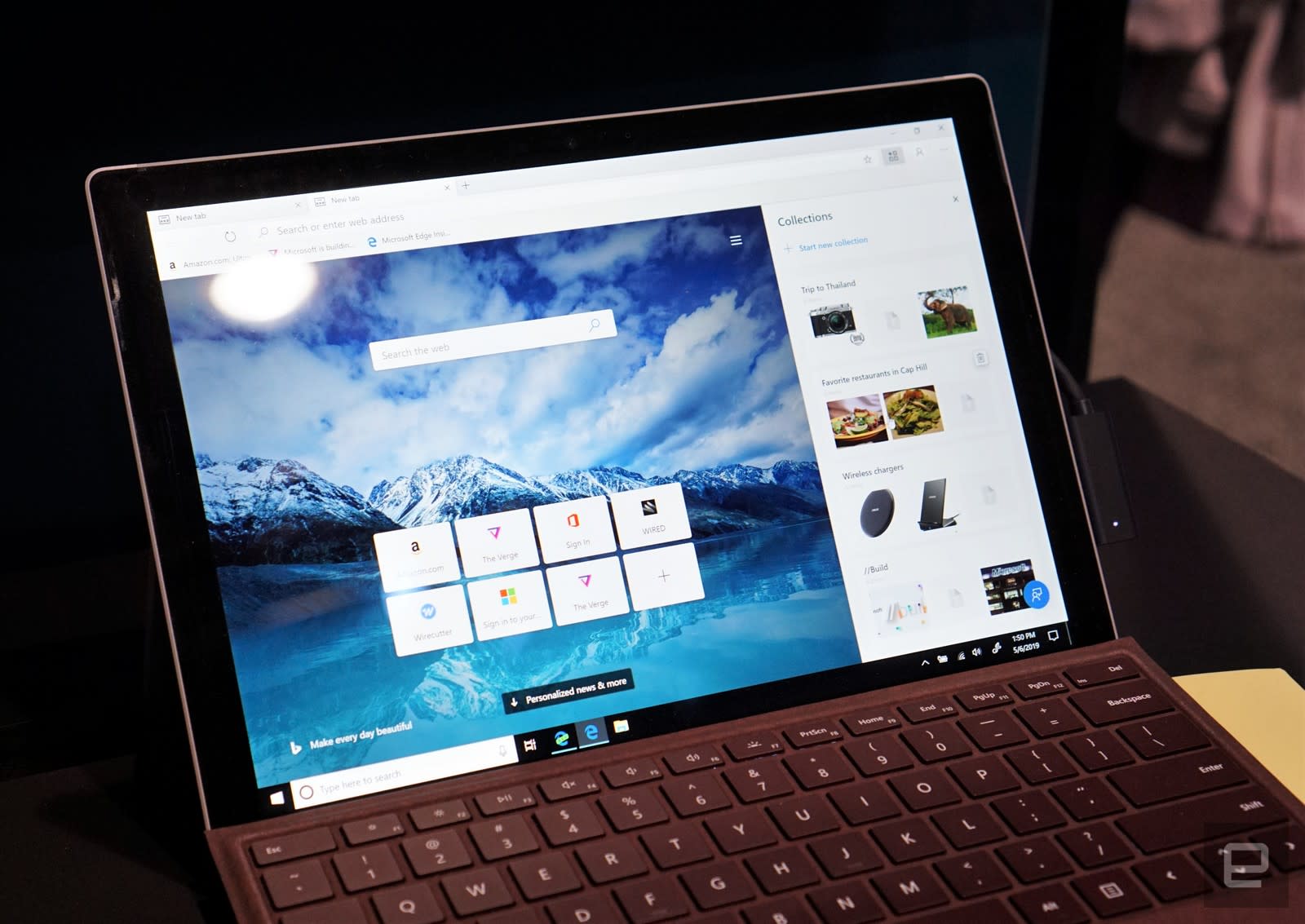 At Build this year, you could see evidence of Microsoft's user-friendly push just about everywhere, even its Edge web browser. The company previously announced that it would be switching the browser's engine to the open source Chromium -- which notably powers Google Chrome -- rather than continue chipping away with its own proprietary engine.

"I think we took an opportunity to take a step back to say, how is our compatibility being achieved? How many resources are being spent on that, versus the resources being invested to make the web itself better?," Kevin Gallo, corporate vice president of the Windows Development Platform, said in an interview. "We felt at some point it was a better investment for us to contribute to one engine, in the open... And then the value proposition is that all the browsers on Windows get better."

By moving to Chromium, Edge could be a much more compelling tool to developers, since they won't have to worry about dealing with Chrome incompatibilities. It also gives Microsoft room to innovate in other ways. The upcoming Collections feature will let you gather groups of websites, share them with friends, and export them as neatly formatted Word and Excel documents. The new Edge will also feature an Internet Explorer mode, giving people an easy way to access sites that still rely on that older browser (which is more common than you'd think for some office workers). That was also a move driven by customer feedback, Gallo says. Windows 10 still ships with Internet Explorer too, but the company quickly learned it was easier to keep people within a single browser.

Microsoft is also turning to more AI-driven features to make our lives easier. Ideas in Word is a huge leap beyond spell checking -- it can suggest grammar changes, more concise phrasing, and even more inclusive language. The goal is to make you a better writer over time by highlighting your common mistakes. And while that might sound like Clippy on steroids, the company is focused on ensuring Ideas and similar features are actually useful.

"For AI features, there has to be a minimum bar of quality for you to trust it," said Malavika Rewari, senior product marketing manager of Office Intelligence. "We don't release something unless it's meeting that bar. And we release it in phases: First we dogfood [test] internally within Microsoft and do a lot of usability studies. We then go to early adopters, Insider programs and early release programs, where we go to a more diverse data set. And then we go to consumers and then commercial users."

She credits improved algorithms and broader availability of user data as one reason we're seeing more AI-driven capabilities from Microsoft. And since Office products are connected to the cloud, the company gets much more detailed data about how people actually use those apps. So, for example, Microsoft knows that around 80 percent of users like to run spell check while they're writing, but the rest do it after the fact. For that 20 percent, there's a bin on the right side of the document that lets them quickly run through all of the corrections.

Looking ahead, Microsoft showed off some pie-in-the-sky products that could change the way people work. A brief demonstration of a smarter, more conversational Cortana, made interacting with the AI seem more like talking to an actual assistant. We watched as an executive strolled into work, all the while re-arranging meetings, booking lunch reservations and doing most of her morning tasks while chatting with Cortana naturally on her phone. While it's unclear when we'll actually see that upgrade, conceptually it's a huge leap beyond current virtual assistants, where we basically just shout commands and wait for a response. (It'll also have some competition from the next-generation Google Assistant, which isn't as much of a conversationalist, but seems incredibly fast.) 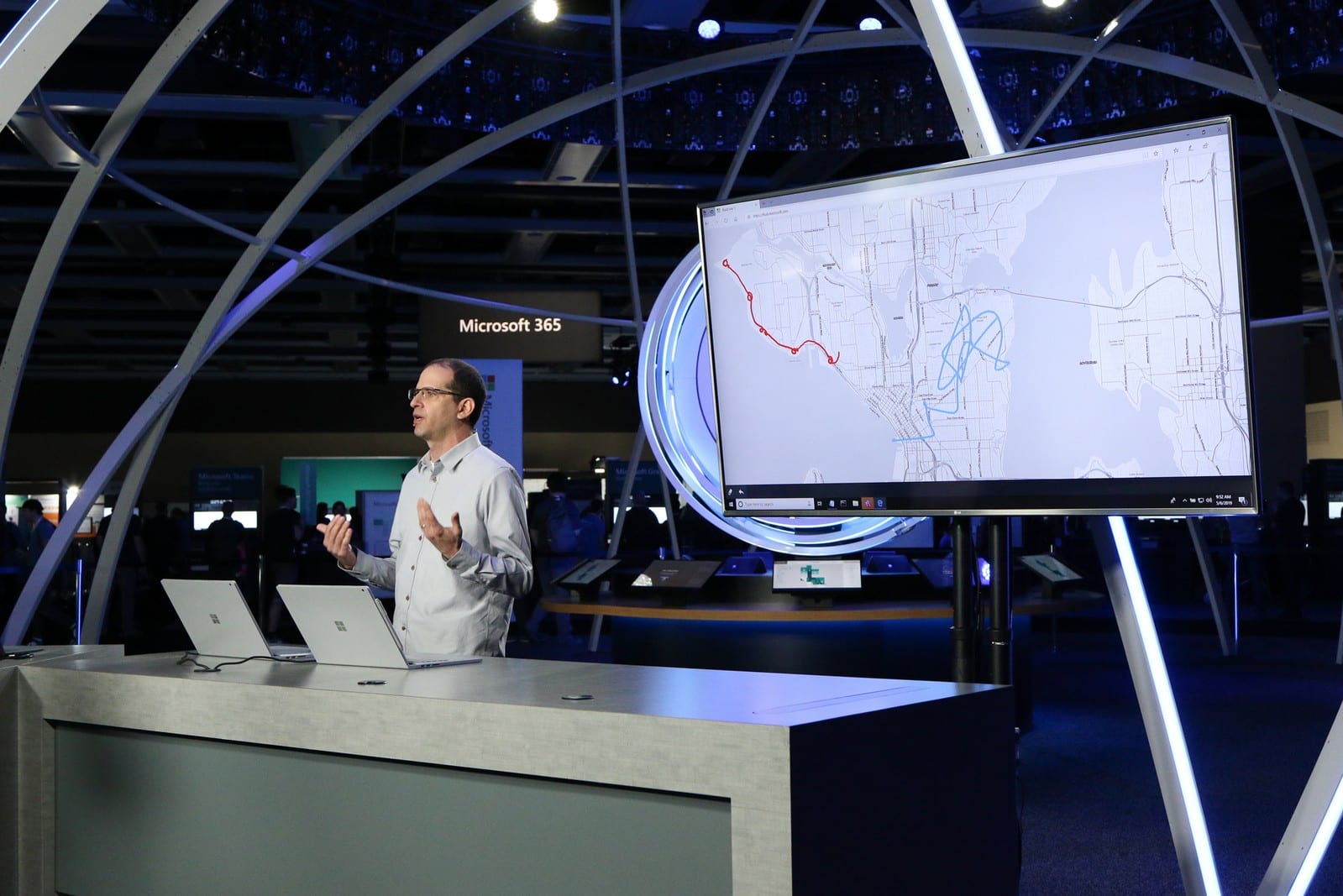 One of the more wonkier announcements from the show, Fluid Framework, could also change the way we think of documents forever. At its most basic level, it's Microsoft's way to improve collaboration, going a step beyond the current Office and Google apps with much faster synchronization. But it also goes further by turning portions of files, like a chart driven by live web data and a table of stats, into individual components that can be dropped into other documents. Even better, any changes you make to that chart will be instantly synchronized to wherever it shows up.

Fluid Framework started out as a concept at Microsoft's Envisioning Center, its prototype lab for dreaming up ways we can work in the future. Extensive research made it clear that people wanted to work with their files in different ways, with more collaboration and flexibility than you'd get from Word or Powerpoint. During a brief visit to the lab, Microsoft's Anton Andrews pulled up a document on a giant touchscreen display and plugged in a chart from a colleague. He was able to jump into the chart to see all of its data sources. After tweaking the document, he hit a button to automatically format its hodgepodge of text, stylus scribbles and writing styles into something cohesive. 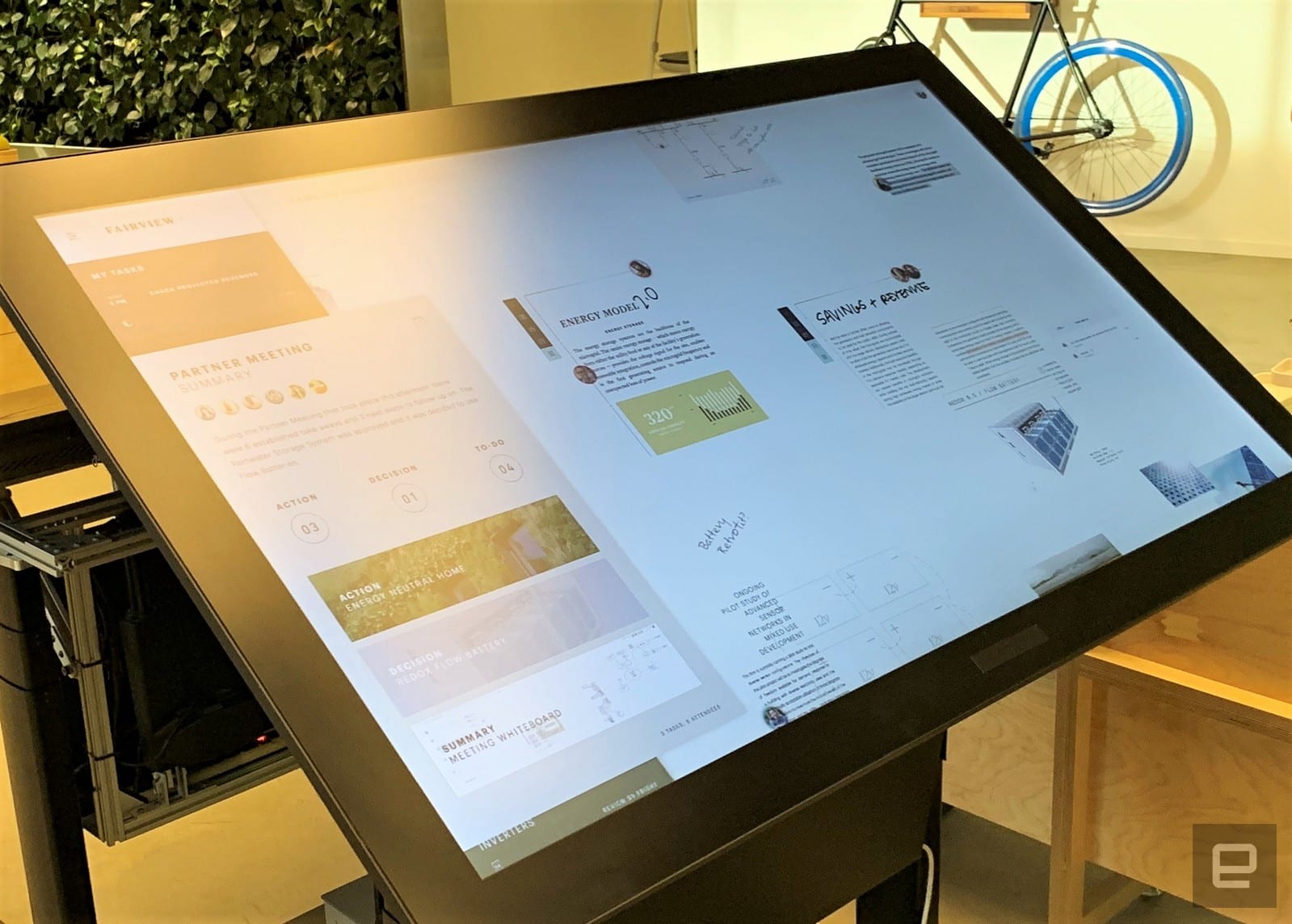 The end result (below) looked like a polished brochure. But that wasn't the end: He could also automatically transform it into something resembling a presentation, without making any additional changes. It's a bit of a high-minded concept, but to paraphrase Back to the Future: where Microsoft is going, we won't need file formats. While it'll likely be a while before this concept is made real, the company will start deploying Fluid Framework in some products later this year. 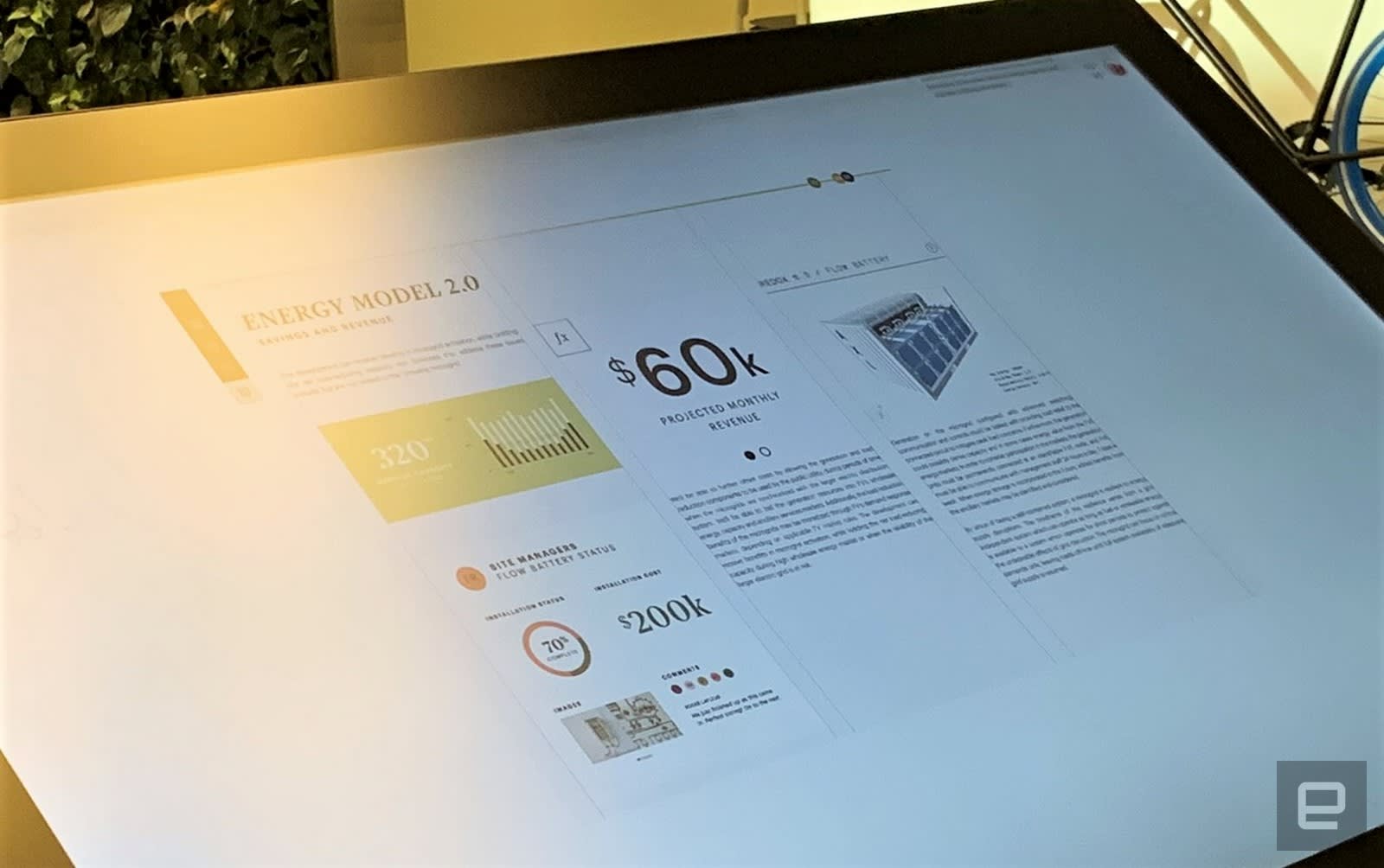 As Andrews explains it, the Envisioning Center focuses on humans and how we work, and not just tech products. In one demo, he pulled up a simplified phone interface that boiled down all of the morning notifications a worker would see as they walked to the office. The goal was to give them a more centered and focused way to start the day. When he got a Teams message from a colleague, he was able to quickly respond and pull up a relevant document, which the AI automatically surfaced based on their conversation. Notably, they weren't pulled out of their morning routine. 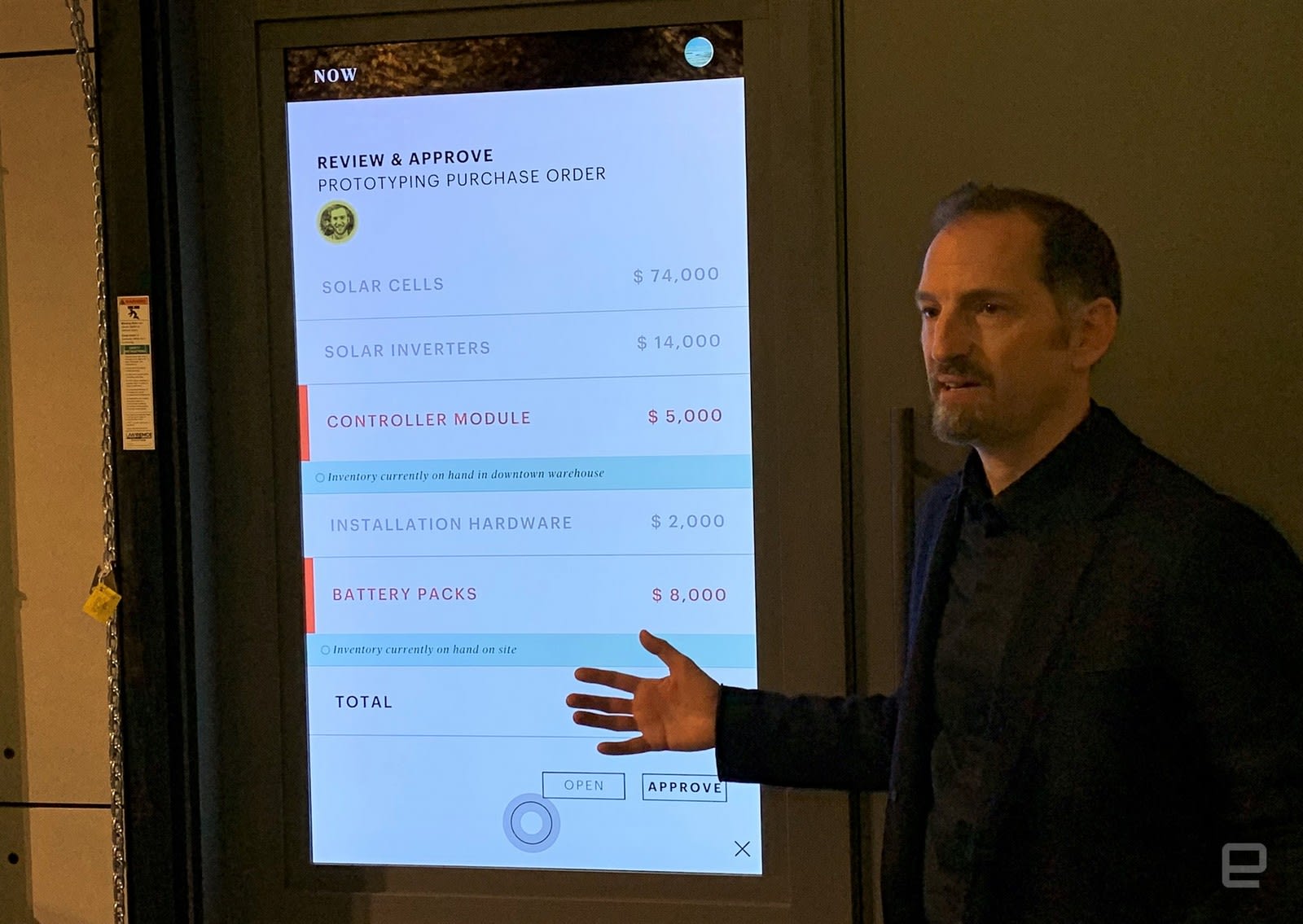 The Envisioning Center deals with far off ways to improve our workflows and "enable ingenuity," as Andrews says. But you can draw a line from its concepts to many of Microsoft's current products. MyAnalytics in Office, for example, breaks down how you spend your time during your work week. If you're stuck in meetings often, it'll alert you to try and schedule more focused time. Teams can record your meetings and automatically transcribe them, so nobody is stuck doing that grunt work. And the upcoming Collection feature in Edge I mentioned above could make like a lot easier for anyone researching a report or major shopping decision online.

The idea that Microsoft would reinvent itself as a more empathetic, people-focused company would have been unfathomable not too long ago. But it's clear that the Microsoft of today is dramatically different from several years ago. There's a new leader, and a completely different way of thinking about their technology. And most importantly, it's finally listening to what people actually want.