Tamagotchi On is connected, cute and cacophonous

Beep. Beep. Beep! The constant refrain of an unhappy Tamagotchi. Or any Tamagotchi, really. '90s kids learned to both love and dread that sound when the egg-shaped Japanese toy hit American shores over twenty years ago. And, while Tamagotchi never really went away, most people left it behind in favor of more robust smartphone simulations like Pokémon Go and Neko Atsume. Now Bandai has a new creature built for the smartphone era, one that stays true to its roots as a single serving device but also includes a boatload of connectivity, so you can get super social with your virtual pets.

The first thing you're going to notice about Tamagotchi On is that it's a heckin' chonker. Its 2.5-inch height fills up my adult hand, and it's not particularly pocket friendly unless you're into cargo shorts. Those increased dimensions over the standard two-inch model allows it to pack in a 2.25-inch color LCD screen, an infrared sensor and oh yeah, Bluetooth so it can connect to your phone.

This isn't the first Tamagotchi to connect to a device: That would actually be the Tamagotchi 4U, which let users download gifts by tapping their plastic egg against their phone or tablet. But that one used NFC to transfer data and was only released in Japan. This Bluetooth LE model is the first Tamagotchi that encourages full back and forth connectivity. You'll be able to transfer your creature into the upcoming Tamagotchi On app, meet other characters, participate in events and download new content including a geolocation feature. Unfortunately, the app isn't ready to test yet so I can't tell you if it's any good. 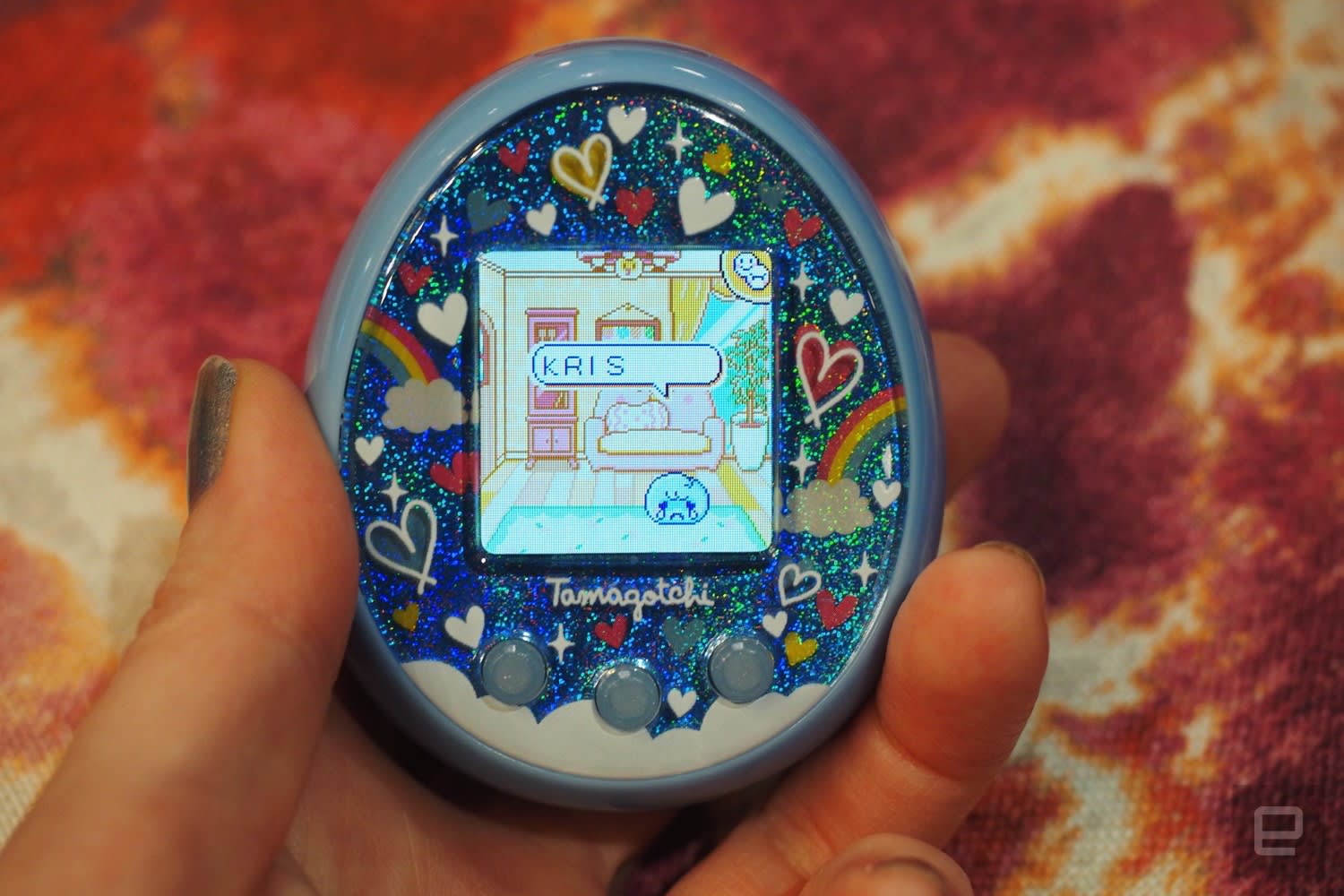 As a standalone device, however, the Tamagotchi On is pretty full-featured. The front of the egg keeps the standard three button control scheme that, while a pain in the ass for things like text entry, works just fine for the creature's basic functions. Your pet will mostly occupy a nice tidy little living room and dance around in either delight or depression, though you have the option of buying more rooms as you earn virtual money via activities. You'll feed the little guy or girl, clean up its poop and play with it regularly. If it needs attention, the device will beep at you, even if you're not currently handling it. At least it's not as insistent as previous Tamagotchis I've played with: I had two of these in my bag during a screening of Detective Pikachu and only heard them beep once (and they were already in bed before the film was over).

Aside from that basic repertoire there's actually quite a bit for your creature to do. You can let your pet wander about town and take them to the park to interact with in-game characters. A trip to the store lets you buy more rooms to live in, toys to play with and accessories for them to wear. At the store are also two games to play, one where you avoid sharks and receive gifts from dolphins, and another where you mash the 'A' buttons as quickly as possible to surf. You can unlock other towns to visit, which changes up the scenery and allows your pet to meet even more species of Tamagotchi. 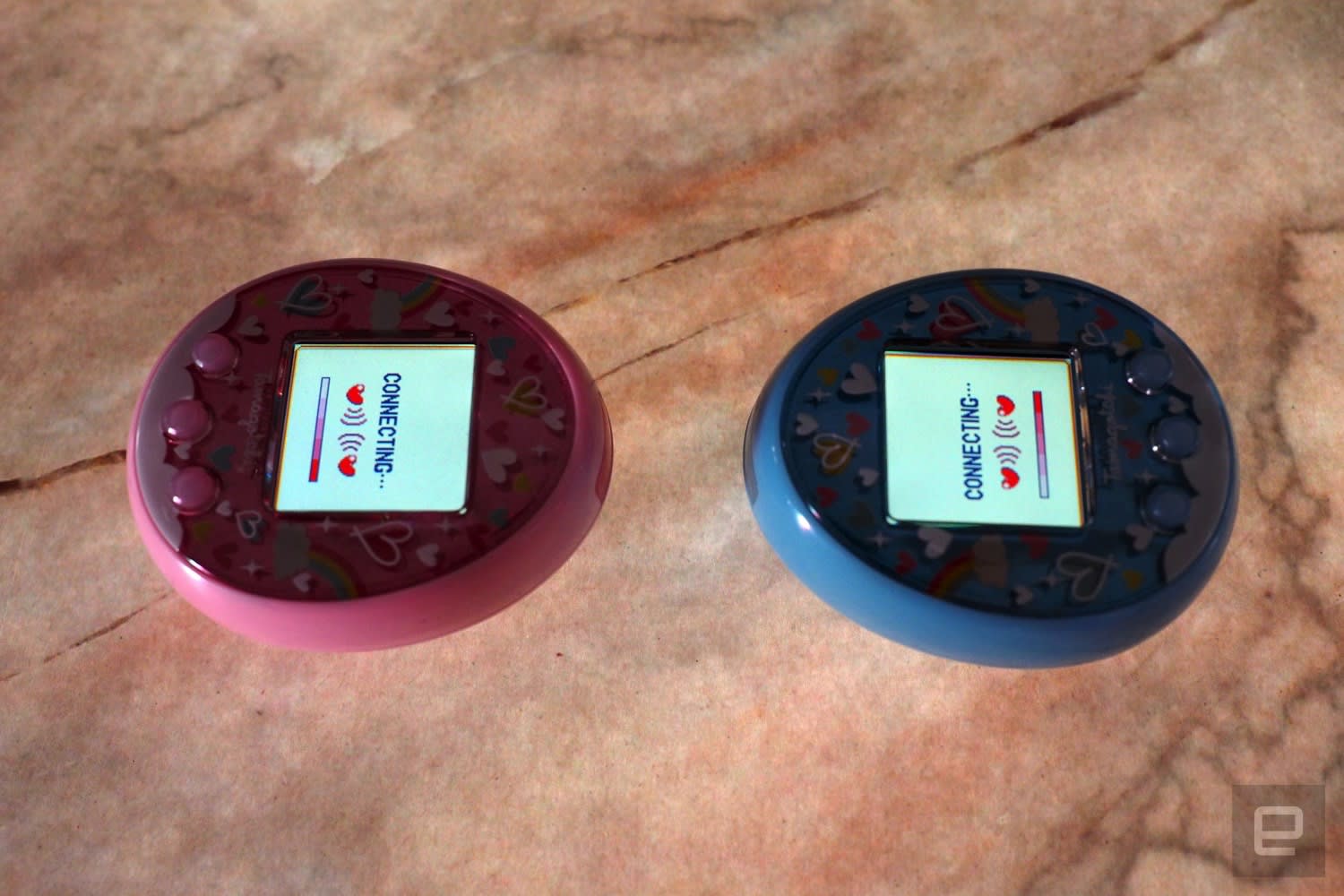 Even without the app there's still some connectivity thanks to that infrared sensor on top. You can directly sync up two creatures on a "playdate" which should let them play or take photos with each other, except nothing ever seems to happen on my device.

Less confusing and a lot more fun are the vacations you can send your Tamagotchi on. One user sends an invite and then the other pet sort of puts up an "out of office" sign on the screen as they're transferred over to the other device to take a resort trip. There's a short animation of the two enjoying their time together, then they part ways and both devices go back to normal. But your Tamagotchi will occasionally get mail afterwards from their newfound friend, which will sometimes remind you that they should meet up again. 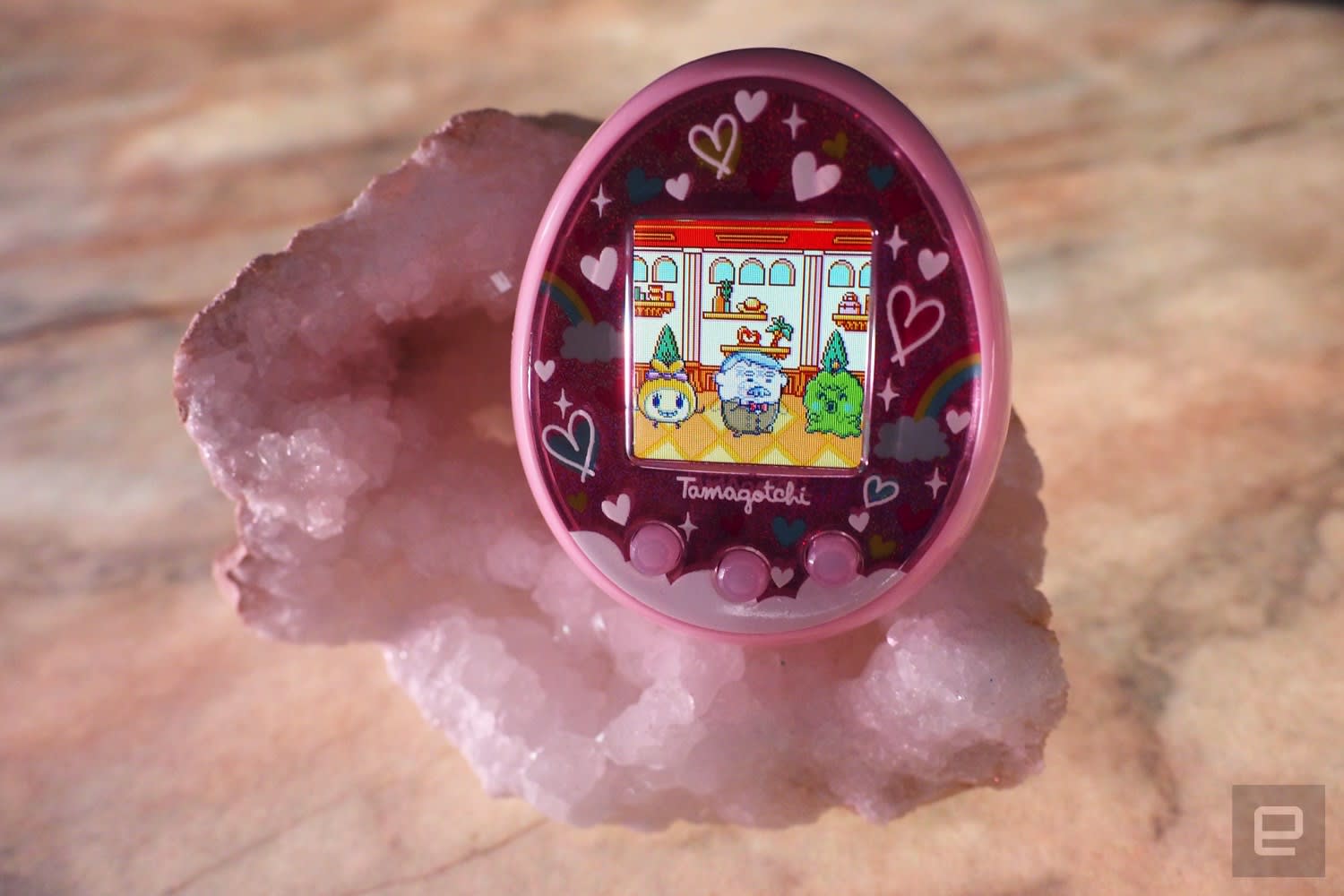 After some time and plenty of bonding you can marry your Tamagotchis to each other and breed generation after generation of adorable pets. Unfortunately, at the time of this writing both of my creatures were too young to start a family. What they are old enough to do is run out of battery, so you'll looking at about four or five days of play before you need to change out the two AAA cells.

With so many features still inaccessible I can't say if it's going to be worth the $60 Bandai is asking for this model when it comes out this summer; previous models like the anniversary edition have cost as little as $15. As-is, I think it's super cute and I love fiddling around with it. Everyone I showed it to was delighted by its design and graphics (especially the '90s kids). At the same time, maybe we don't need another device demanding our attention.