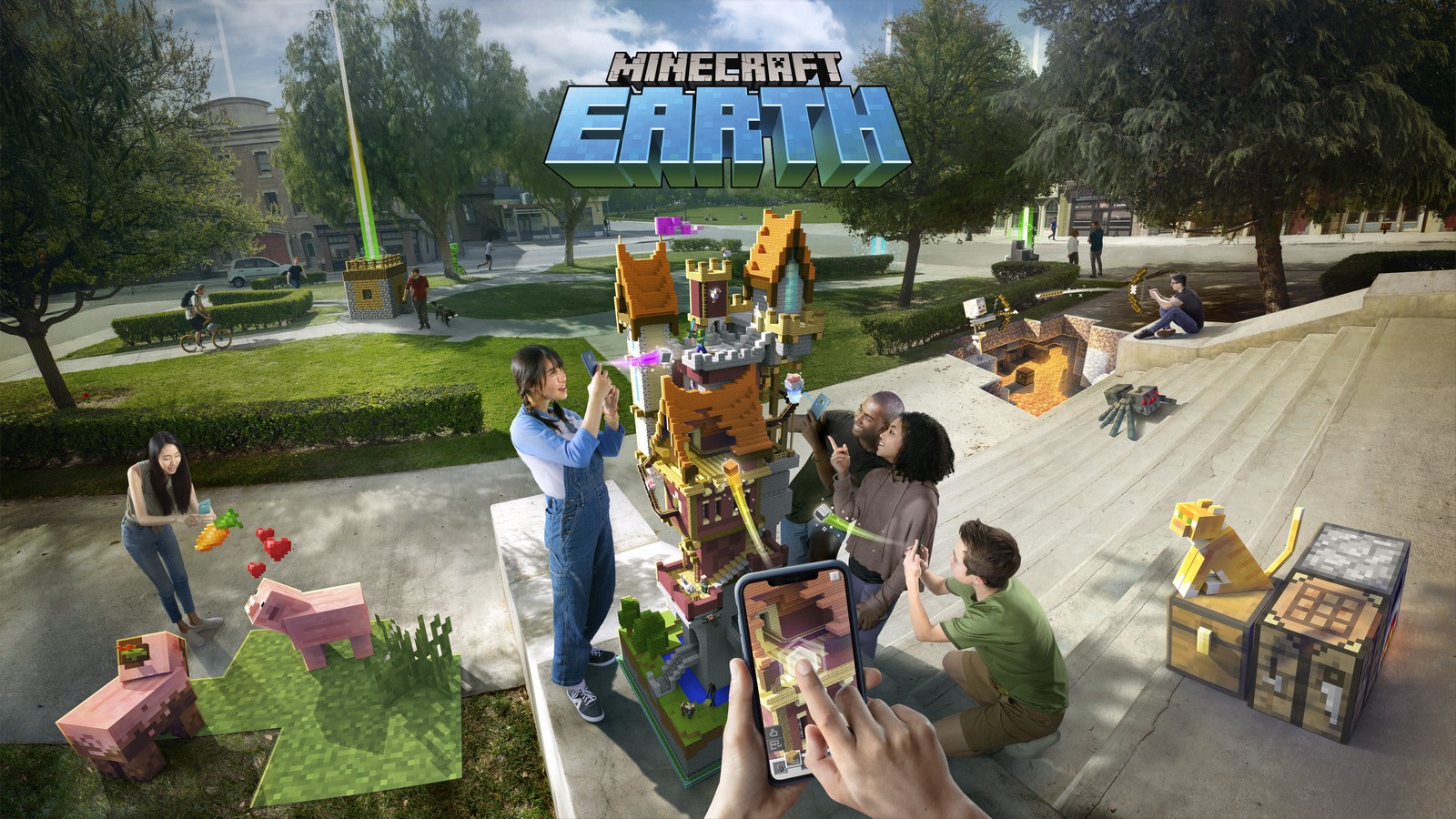 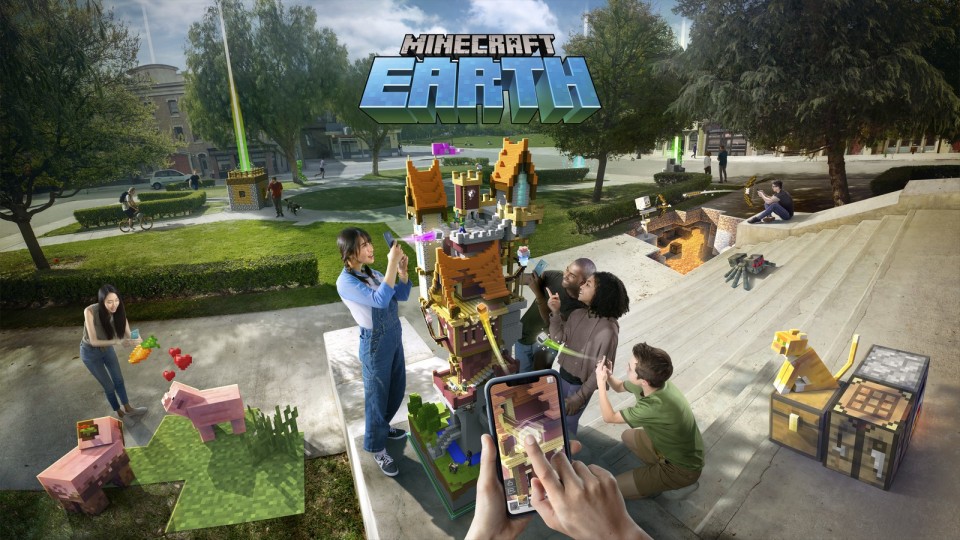 Microsoft wants you to see Minecraft everywhere you look: a virtual tree on your lawn, a life-sized castle sticking through your house and an elaborate cave system hidden beneath your local park. This is Minecraft Earth, a free-to-play version of one of the most popular games ever made, rebuilt around augmented reality for the iPhone and Android. Similar to Pokémon Go, which popularized AR gaming in a massive way, it relies on your smartphone as a window into a virtual world. But unlike that game, Minecraft Earth is completely committed to the notion of augmented reality. You're not just running into a random Pikachu on the sidewalk, you're building elaborate Minecraft creations that everyone else can see. The title says it all: It's a planet-wide Minecraft takeover.

"There are these moments in digital entertainment and technology, where you have not just one, but a number of enabling technologies coming online at the same time," Torfi Olafsson, Minecraft Earth's game director, said in an interview with media. "It's this confluence that happens where, when you put them together, products appear that could never have appeared before."

Specifically, he's referring to the supercomputers we're all carrying around in our hands, which have powerful cameras and horsepower for advanced visual computing. But there are also plenty of other advancements that made Minecraft Earth possible: Olafsson points to Microsoft's massive Azure datacenter presence around the world, huge investments in augmented reality, better GPS capabilities and faster mobile networks (especially upcoming 5G speeds). It also helps, of course, that Minecraft is one of the most widely recognized games around. (In 2017, it was searched more often on YouTube than cats and all music combined, according to Minecraft executive producer Jesse Merriam.)

"When we say augmented reality, we actually mean augmented reality," Olafsson said. "It's not just a geocaching game with 2% of it in AR [ahem]. We decided to go head first and build the game from the ground up as an experience that you play both in your immediate environment, and out in the world, in parks and cities, wherever you are."

I saw the future of gaming in a nondescript meeting room in Seattle. I held up an iPhone, and ahead of me there was a Minecraft building sitting atop a table in AR. Just like every version of the game for the past decade, I could use the phone to take blocks away, stack new ones to shape it to my liking or drop in mobs (virtual animals). But since it's AR, I could interact with it like a real object: I got in close to check out all the tiny details and walked around the table for alternate angles. I wasn't alone, either. Several other journalists, who I could also see virtual avatars of in my phone, were tweaking the building at the same time. It was like we were kids playing together in a sandbox. In many ways, it was Minecraft in its purest form: pure creation through collaboration.

Even during our short demo, we managed to surprise the Minecraft developers by creating a mud slide that ended up covering a large portion of the environment. We dug as deep as we could, far lower than the surface of the table, to find the bedrock. We dropped a few chickens and cows into the world, and cackled as they fell into the pit. We could even push the animals slightly around the environment by nudging them with our phones.

But Minecraft Earth isn't just about building miniature environments: You can also step into life-sized versions of your creations. For our next demo, my media friends and I dropped into a small castle-like room where skeletons were gearing up to attack us. I cleared out a few ahead of me with a crossbow, but for some reason, I was still taking damage. I had to physically turn around to see another baddie whaling on me -- but before I could retaliate, one of my colleagues took care of it. Adventures like this will pop up all over the world and will offer rewards like treasure and rare blocks to brave adventurers.

Minecraft Earth is still ultimately the same game we've been playing for the past decade. You'll spend most of your time hunting for resources, exploring new areas for treasure and building whatever you'd like. Except now, you're interacting with the real world, instead of just sitting and staring at a monitor or TV. Olafsson says it'll also be more welcoming to new players, unlike the original game, which forced players to figure out almost everything on their own. That's a smart move, since the franchise needs to find new ways to grow now it's ten years old.

While the Minecraft Earth apps I saw were still early builds, the most recent version looked more polished than the initial version of Pokemon Go. I saw a block-ified version of downtown Seattle all around me, and I was able to tap on treasure boxes and mobs to add them to my inventory. While the overall Minecraft Earth experience wasn't as dramatically immersive as the promo video and photos make it seem, it was still better than other AR apps I've tried. The game relies on Open Street Maps for basic mapping data, as well as Azure Spatial Anchors to keep track of all the players. The entire experience is powered by Azure PlayFab, which plenty of developers are already using to power their multiplayer titles.

Since this is a title that's aiming to get people outdoors, safety is going to be a major concern for Minecraft Earth. Microsoft says it'll restrict AR content from appearing on private property, but that won't help distracted players from getting hit by oncoming traffic. (It's not a great sign that the promo video features a teenager ogling Minecraft Earth creations while standing in the middle of the street.) Parents will be able to manage privacy settings through Xbox's account system, and Microsoft says there will be in-game and online reporting for any issues. The company is also planning to have a moderation team running 24/7.

Microsoft says it will kick off a closed beta of Minecraft Earth this summer on iOS and Android. Naturally, there are going to be limited slots, and you'll also have to be 18 or older to sign up. And while the plan is to get Minecraft Earth completely global, it's going to start off with a gradual rollout in select locations. You can also expect it to support all the languages in the original game, at least.

Even if you're not a fan of the original game, it's easy to see the potential behind Minecraft Earth. It'll be the first title to take full advantage of the concept of AR, by actually building a new layer of reality across the globe. Microsoft isn't planning to bring the game to HoloLens 2 anytime soon, oddly enough, even though its development was inspired by the early Minecraft HoloLens demo from 2015 (that title was never released). Still, it lays the groundwork for an astounding AR goggle experience down the line. It'll likely be years before viable consumer AR headsets and glasses become available, but Minecraft Earth will be ready for them when they are.

In this article: AR, art, entertainment, gadgetry, gadgets, gaming, gear, microsoft, Minecraft, Minecraft Earth
All products recommended by Engadget are selected by our editorial team, independent of our parent company. Some of our stories include affiliate links. If you buy something through one of these links, we may earn an affiliate commission.