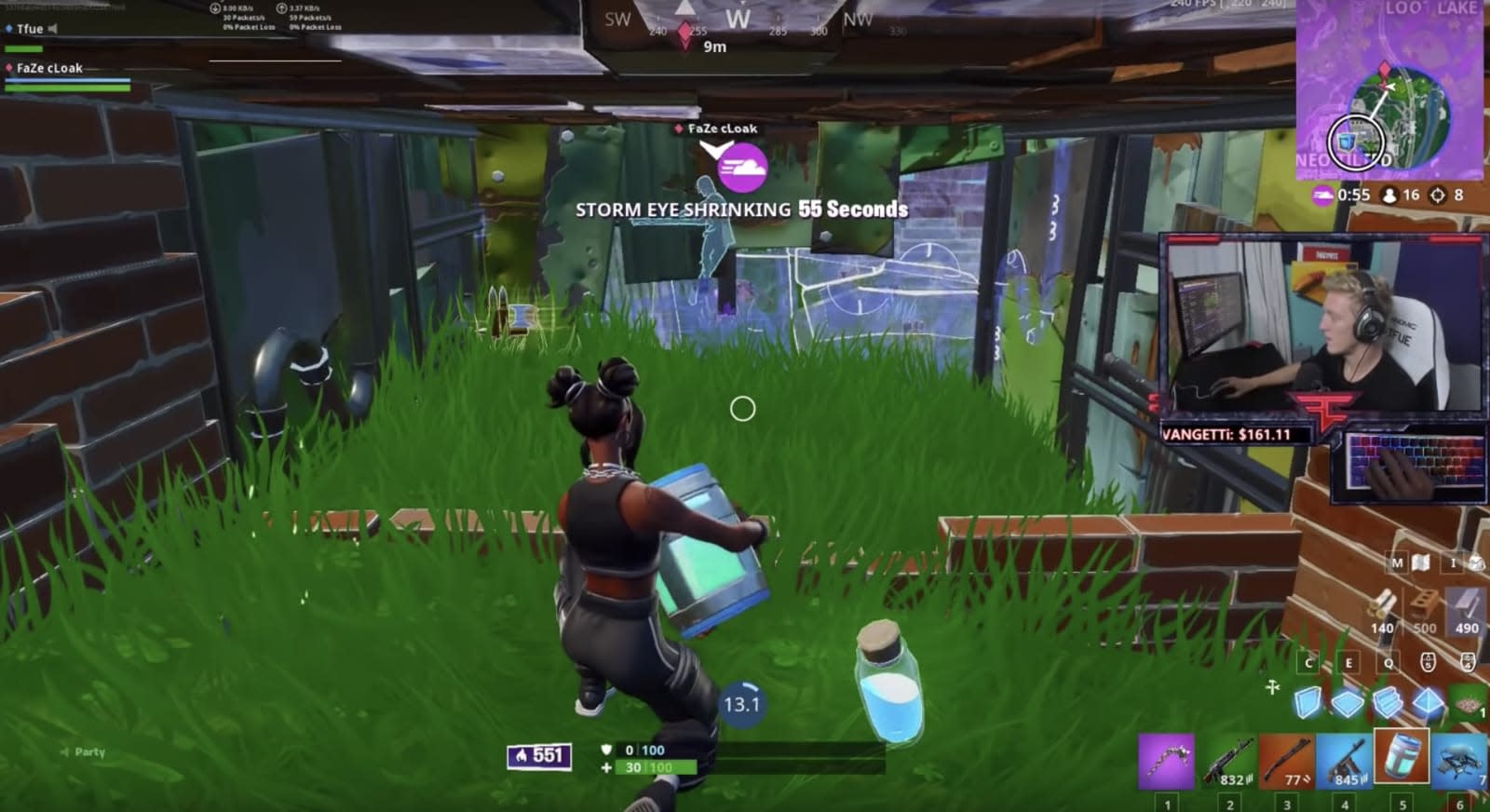 Tfue's lawsuit against FaZe has been a long time coming

And it will likely change the definition of esports.

Turner Tenney is the most popular Fortnite player in the world. He plays as Tfue on YouTube and Twitch, where there's a small red logo for FaZe Clan, the esports organization he signed with in April 2018, built into the border of his selfie box. At 21, Tfue has earned millions playing Fortnite. He has more than 10 million subscribers on YouTube and 1.65 million followers on Twitter, where his bio says simply, "Professional athlete."

Yesterday, news broke that Tfue was suing FaZe for violating California labor laws, specifically the Talent Agency Act, and he was looking to sever ties with the organization. The esports sector of the internet promptly imploded, with FaZe trending worldwide on Twitter for hours.

The complaint labels Tfue as an artist, not an athlete, in order to take advantage of the TAA, which is designed to protect entertainers in California from raw representation deals. It says FaZe essentially acted as Tfue's agent, even though the organization isn't a licensed talent agency, violating the state's Labor Code.

FaZe is one of the most recognizable esports brands on the market, though it's a strange organization when compared to its contemporaries. Many esports organizations, such as Cloud9 or Team Liquid, focus on preparing players for competitions, but FaZe is more concerned with streaming, branding and cultivating loud online personalities. The $30 million Fornite World Cup prize pool is more of an afterthought.

"It's a little murky where they make the bulk of their awareness of branding."

"They used to have a Call of Duty team and all that other stuff, so they have roots in being an esports org, but nowadays it's a little murky where they make the bulk of their awareness of branding -- and it's not in esports," said Barry Lee, senior agent at Evolved Talent Agency, which specializes in handling pro gamers.

The complaint alleges Tfue's contract with FaZe allowed the organization to collect up to 80 percent of the revenue he earned from third parties, and prevented him from signing lucrative sponsorship deals.

"Tenney signed a Gamer Agreement with Faze Clan when Tenney was only twenty (20) years old," the complaint says. "That Gamer Agreement is grossly oppressive, onerous, and one-sided."

FaZe swiftly denied the allegations. The organization said it's earned just $60,000 from its partnership with Tfue and hasn't collected any cash from his tournament winnings or online escapades.

All of this will shake out in the coming legal proceedings and will likely end in a deal where Tfue gets to cut his FaZe contract short. However, the lawsuit should set new, overdue standards for the esports industry overall. Many professional players and streamers are young, some still in high school, and for years esports organizations have operated on a largely unregulated basis.

Only a few professional gaming leagues have rolled out minimum salary requirements and guaranteed benefits for players -- notably, League of Legends and Overwatch -- while contracts have routinely favored organizations' financial progress over players' best interests.

Here's how Evolved Talent CEO Ryan Morrison described the situation to Inven Global: "When a non-esports attorney comes in and reviews an esports contract, what they usually comment is along the lines, 'This is breaking the law in 19 different ways. None of this is okay.'"

The vast majority of professional players don't have the experience or resources to fight for better contracts -- but Tfue does.

"This whole thing has gained a lot of traction because Tfue is a big name and FaZe is a fairly big team," Lee said. "Because of that, immediately everyone had their eyeballs on this whole story. But if it was no-name Joe with no-name esports team, people would have been like, 'Oh, I guess that's just another day in esports.'"

He's not wrong. This past September, players from Denial Esports sued the team's CEO over $35,000 in unpaid salaries and fees, though the story barely made a blip on the esports radar. Tfue, meanwhile, has been enjoying an explosive popularity spike since signing with FaZe in April 2018. He's joined the ranks of wildly successful streamers like Ninja, who made $10 million in 2018 via streaming and sponsorship deals. Ninja has 20 million subscribers on YouTube, he was on the cover of ESPN Magazine, and he isn't currently signed to a team. He did, however, post a video of himself reacting to the Tfue lawsuit just hours after the news broke.

Whether folks are on the side of Tfue or FaZe, the lawsuit itself is spurring conversations across influencer and esports spaces alike.

"What I think this whole lawsuit is going to result in is that teams are going to be a lot more careful about being compliant with state law," Lee said. "Because I think their legal counsel was not experienced in this type of state law and wasn't aware that they were in violation of it."

Now that Tfue's lawsuit is at the forefront of the esports narrative, leagues and organizations no longer have the option of ignoring a longstanding problem. In esports, contract disputes are the new battle royale.

"It will be good for players," Lee said. "I've been researching this whole issue, just to bring up to teams and to bring it up to the esports leagues to get the teams to change things on a league level, so that everybody gets a change in one go, rather than us hammering one contract at a time. Now that this broke out, it gives me something easier to talk about."

The lawsuit also dredges up an age-old debate about whether professional gamers are athletes, performers or something else altogether. Remember Tfue's Twitter bio? He says he's a "professional athlete," but his legal team seems to disagree with that description.

Tfue's lawyers could have made their case with the Miller-Ayala Athlete Agents Act, a law that's more restrictive than the TAA, banning sports teams from acting as representatives for their players, full-stop. However, the fact that Tfue's lawyers went the "artist" route highlights the nebulous nature of esports, where players are often professional competitors and online entertainers in equal measure.

"The Miller-Ayala Athlete Agents Act is more for athletes, and if you look at how battle royale players have been monetizing, they're esports players, but the way they make the bulk of their money is as influencers," Lee said.

"That's just way too much money for what they do."

If Tfue's legal team had relied on the Miller-Ayala Act, it would have been too easy for FaZe clap back with a breakdown of his earnings, which stem mostly from his work as an influencer and streamer. Legally, as a Fortnite streamer, Tfue is an entertainer first, not an athlete.

"The TAA essentially says that any agency contract, and all that stuff, has to be approved by the California Labor Commission," Lee said. "Tfue alleges that 80 percent of the money he made was taken by FaZe as their cut, technically that can be deemed unconscionable. That's just way too much money for what they do."