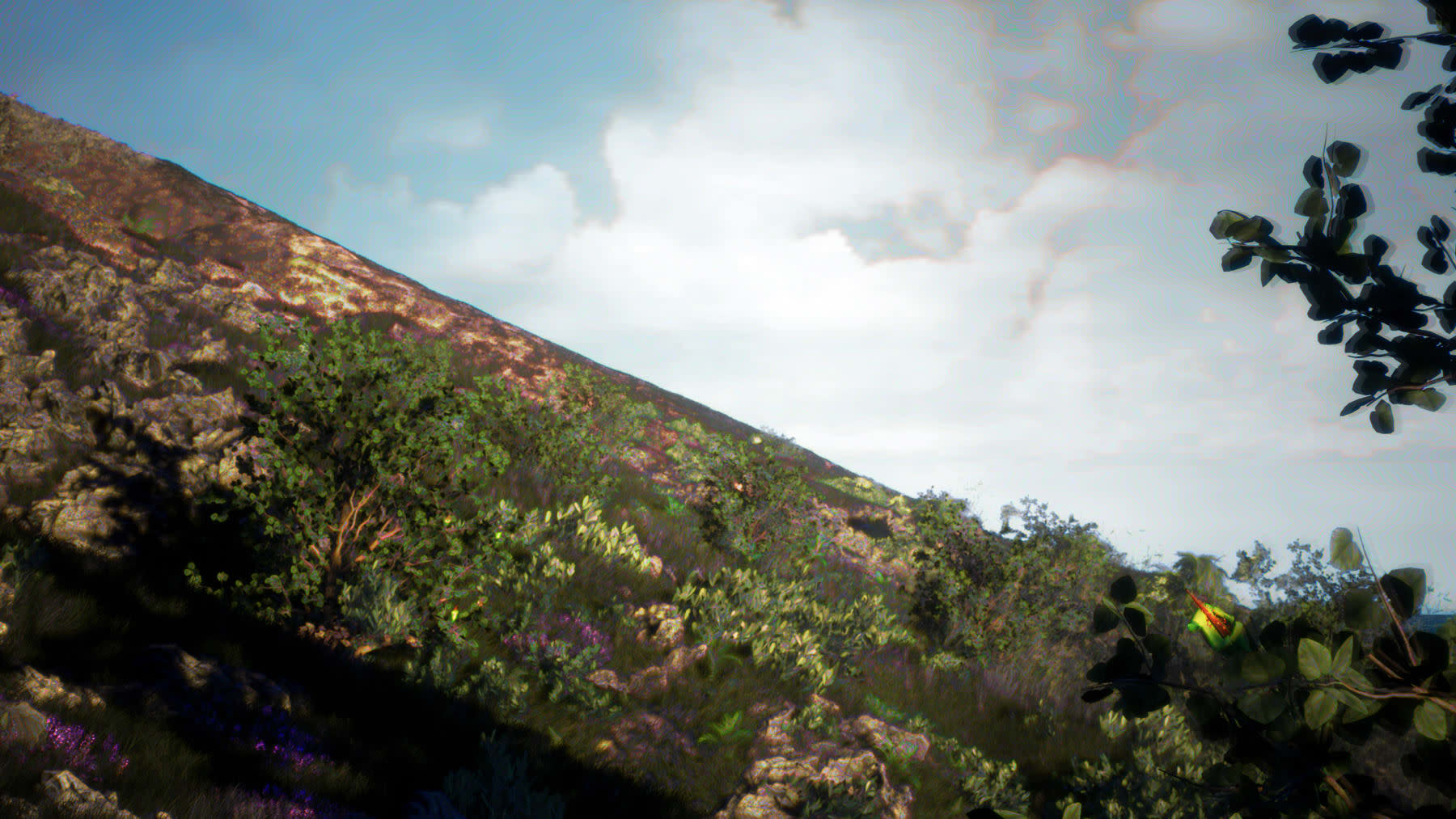 Science has brought back the scent of a long-dead flower

We've lost some parts of our natural world. Swathes of plants and animals have been consumed by evolution, shifting climates or the often-damaging expansion of humankind.

For a moment, though, London's iconic Barbican Centre will let you smell a fragment of our lost history. In the corner of a new AI exhibit, a cuboid hood dangles from the ceiling. Inside are four nozzles that slowly release carefully chosen fragrances into the air around you.

Bark. Pine. Mint. I'm no smell expert, but these are the words that sprang to mind as I slowly inhaled the odors.

The artificial blend is, for now, our best guess at what Hibiscadelphus wilderianus, a tree that once stood on the Hawaiian island of Maui, used to smell like. A small rock sits to the right of the nozzles, hinting at the ancient lava fields where the last specimen was plucked from in 1912. It's a modest visual aid, which is why some virtual environments are included in a short documentary that plays on a loop nearby. Taken as a whole, the installation is powerful enough to drown out the rest of the exhibit and, for a brief moment, transport you to another time and place entirely.

The project was a multi-year collaboration between, among others, Ginkgo Bioworks, a company that specializes in made-to-order microbes, the International Flavors & Fragrances Inc. (IFF), Sissel Tolaas, a prolific smell researcher and Dr. Alexandra Daisy Ginsberg, a multidisciplinary artist and synthetic biology researcher. As Scientific American explains, it all started when Jason Kelly, the CEO of Ginkgo Bioworks, heard about Scent Trek, an initiative by flavor and fragrance giant Givaudan to capture the molecules around exotic flowers and fruits.

The discussion sparked a question. Would it be possible to pluck an ancient flower buried in the Arctic permafrost and recreate its scent with some advanced gene-sequencing and synthesis? No, it turns out. Christina Agapakis, the company's creative director, asked around and was told that any Arctic remains would be too small or damaged for gene sequencing.

She did some research, though, and found a paper that explained how DNA could be taken from plants and animals preserved in a museum. Elated, Agapakis and Dawn Thompson, formerly head of next-generation sequencing at Ginkgo Bioworks, visited the Harvard University Herbaria (HUH) with a list of extinct flowers. "They went manually through the archives," Ginsberg told Engadget, "trying to work out if Harvard had any rare specimens in the collection." The pair found 20 in the vast archive and managed to take samples from 14, including Hibiscadelphus wilderianus.

"It was very, very difficult... these samples are so degraded by time."

Ginkgo Bioworks struggled at first to extract the necessary DNA. "It was very, very difficult," Ginsberg said. "These samples are so degraded by time." The team eventually sent its samples to the Paleogenomics Lab at the University of California, Santa Cruz (UCSC), which crushed them into powder and, with some advanced chemical know-how, extracted usable DNA. Thompson then ran these through a sequencing machine at the Ginkgo Bioworks laboratory in Boston, Massachusetts. Reams of genetic code came out the other side (hallelujah!) though it was unclear which, if any, could produce sesquiterpene synthases, a type of enzyme that could be paired with special yeast to ultimately produce the desired scent molecules. 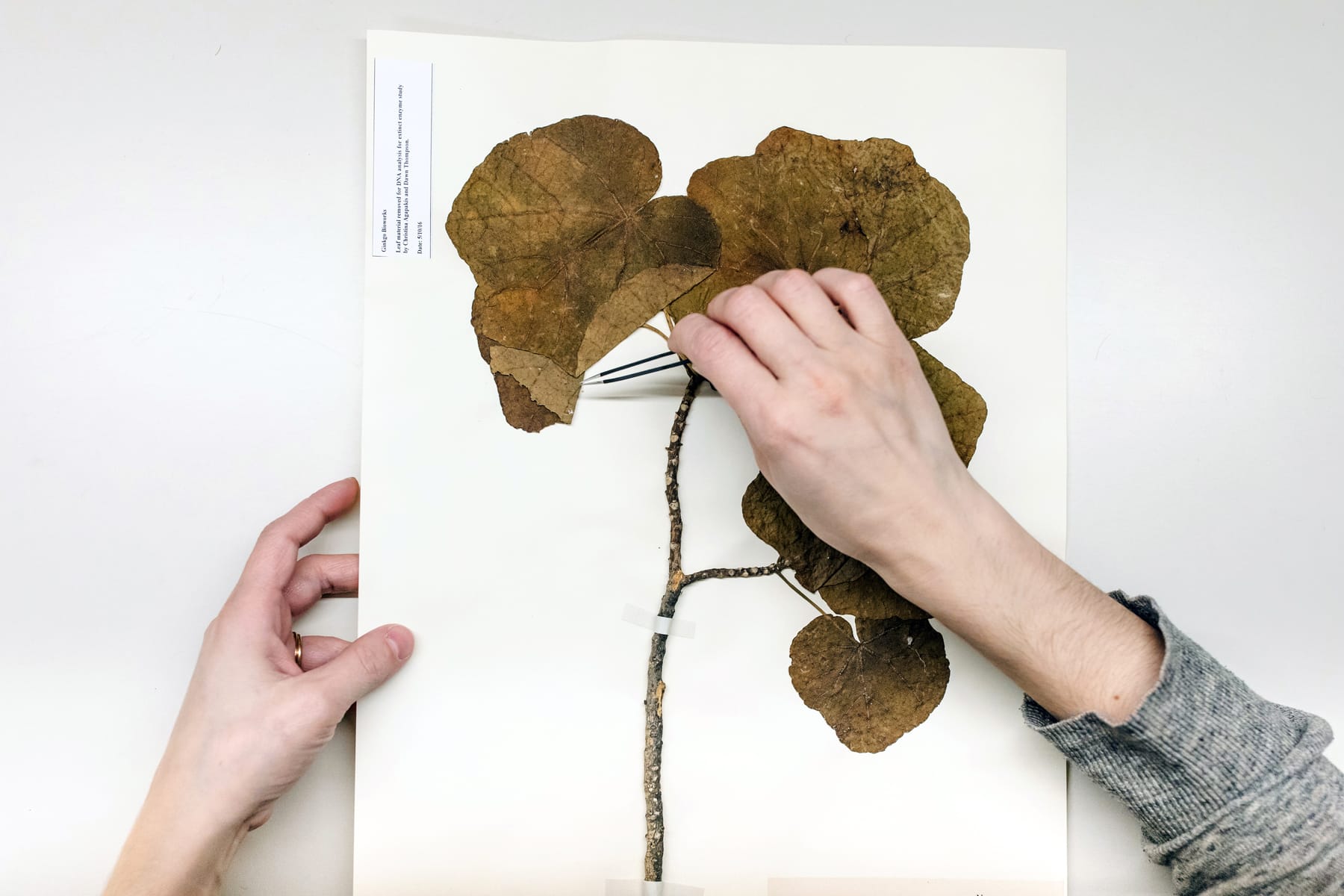 Piecing these genetic fragments together was tough. Jue Wang, a computational biologist who worked for Ginkgo Bioworks at the time, used modern sesquiterpene synthases as a guide. "So using computation to say, 'Well, we have this little sequence here, this little sequence here, maybe those two bits fit here.' And then fill in the gaps," Ginsberg said.

The resulting sequences, while likely imperfect, were close enough for the company's purposes. Wang used a DNA printer to give his digital creations physical form. The molecules were then dropped off with the yeast and allowed to ferment for a while. "Ideally, those yeasts start producing the particular smell molecules," Ginsberg said. "So that's the synthetic biology bit." The concoction was then analyzed with an electronic nose that utilizes mass spectrometry. The hardware allowed Scott Marr, a molecular microbiologist, to strip away the yeast parts and confirm that, at last, the team had produced some tiny, smelly sesquiterpenes.

"That's how you end up getting a list of the molecules that are smelly," Ginsberg said, "that the flower or plant may have produced."

"We don't actually know the quantities of those molecules. We have a shopping list, but we don't know the amounts."

In the end, the team was able to complete this process for the Hibiscadelphus wilderianus and two other plants. The volume of molecules was too small for a human to smell directly, though. And the team was unsure exactly how the smells of each flower should be blended together. "We don't actually know the quantities of those molecules," Ginsberg explained. "We have a shopping list, but we don't know the amounts. So then it becomes much more contingent and blurry, the picture that you create."

Ginkgo brought in Tolaas to brew some different fragrance combinations. They had to be replicable and were, therefore, created with a mixture of identical and comparative molecules in her laboratory. "Because some of those molecules aren't commercially available," Ginsberg said. 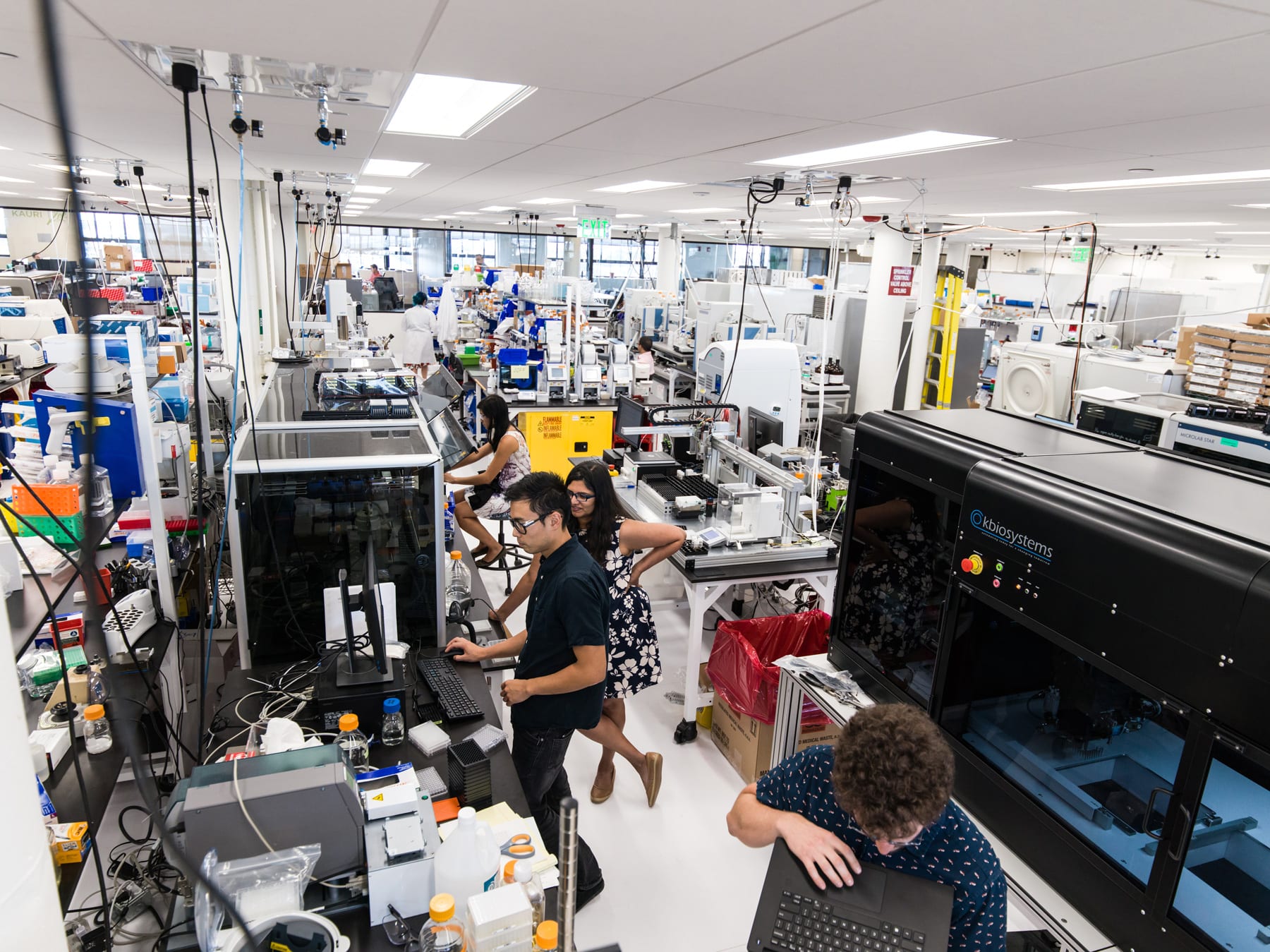 Ginkgo Bioworks is an "organism company" that makes valuable ingredients for perfumes, food, cosmetics, and more.

The final fragrances are, well, a bit of an educated guess. One based on science, though, and countless experts scattered around the world. For Ginsberg, that's what makes the project so fascinating. "We're using biotechnology to talk about loss and memory," she explained. Many flowers, including Hibiscadelphus wilderianus, have been lost due to human colonization. Do we have a right to smell those flowers again? And does it matter if the landscape they were part of no longer exists?

"We need to think less in terms of individual species and more in terms of how we look after habitats and environments," Ginsberg said. That's why the installation at the Barbican -- one of many the team has put together to show off their work -- has a companion documentary with virtual flythroughs. Even those are imperfect, Ginsberg explained, because they're based on paintings, rather than photographs. "They're not scientific reconstructions of these landscapes."

The four nozzles release different parts of the final fragrance that Sissel constructed. They explain how the smell was created and allow the visitor to speculate what, if any combination is correct. For Ginsberg, it's also a way to highlight humanity's role in the project and how we observe, document and recall nature. Hibiscadelphus wilderianus grew on its own and might have survived longer had humanity left its habitat alone. We're only aware of its existence, however, because someone took a sample and gave it a name which, let's be honest, could have been anything. Furthermore, we're only talking about it now because a team tried to resurrect its lost fragrance. 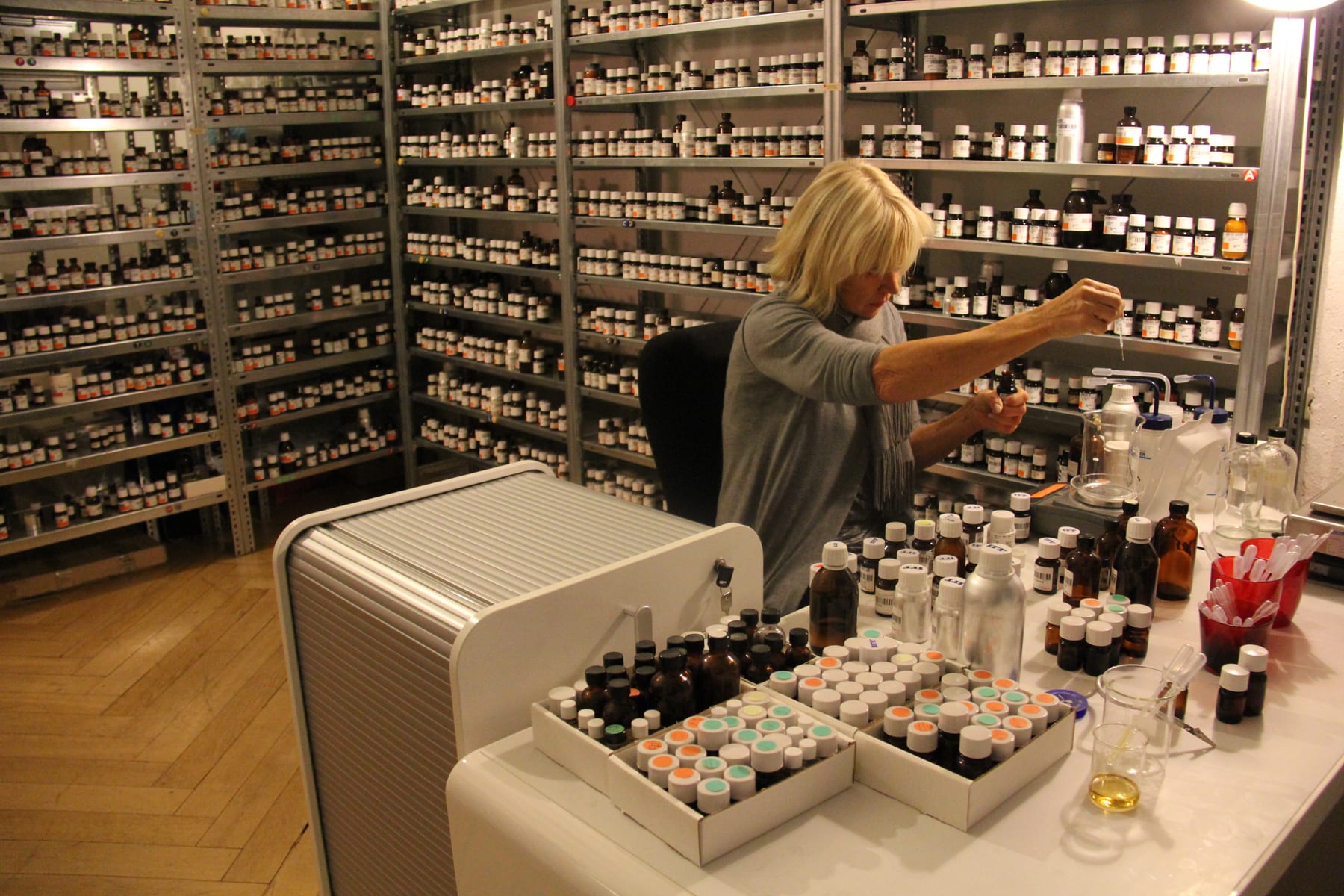 Smell artist and researcher Sissel Tolaas in her Berlin studio.

It's a complicated and fairly philosophical view. But one that is worth thinking about as we simultaneously pollute the planet and try to revive what has already been lost. It is, of course, phenomenal that a team of scientists and smell-loving artists has been able to bring back, at least in part, the fragrance of an extinct flower. But maybe our attention, first and foremost, should be ensuring we don't lose these species in the first place.

All products recommended by Engadget are selected by our editorial team, independent of our parent company. Some of our stories include affiliate links. If you buy something through one of these links, we may earn an affiliate commission. All prices are correct at the time of publishing.
View All Comments
Science has brought back the scent of a long-dead flower