The next Call of Duty campaign is an emotional hellscape

That's one of the guiding mantras for the developers building Call of Duty: Modern Warfare, this year's installment of the legendary first-person-shooter franchise. Modern Warfare comes out on October 25th and it's at once an homage to the series' history and a completely new vision for Call of Duty, with the single-player campaign thrusting classic characters like Captain John Price into overwrought situations that are ripped from current, real-world headlines.

The narrative thread of previous Modern Warfare games is gone, while key developers from the original run have returned to Infinity Ward with fresh eyes and more than a decade of distance. The narrative and design teams have been stacked with developers from Naughty Dog, whose core focus is to cultivate raw, emotional impact. Yes, in a Call of Duty game. 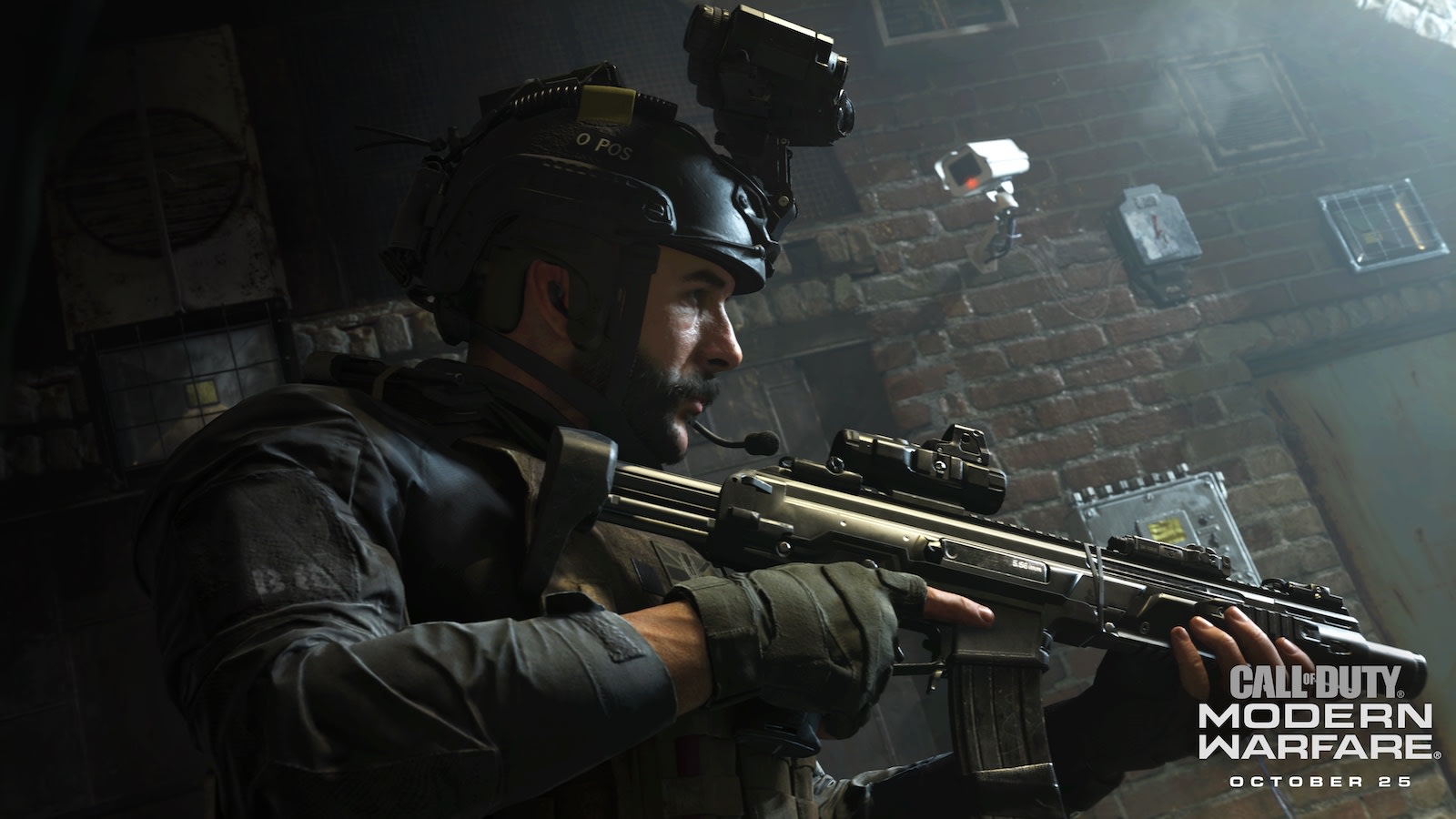 That's what Kelly means when he says, "Jaws, not Saw." Modern Warfare is meant to be a mature and authentic portrayal of today's battlefields, complete with psychological dread, complex villains and real-world gore. Pacing and suspense take precedence over gratuitous trauma and violence.

Still, there's plenty of both. Modern Warfare tells a story from two perspectives: playing as a highly capable and kitted-out Tier 1 Marine, and as a freedom fighter from an ambiguously Middle-Eastern region. Players have access to different weapons and skills on each squad, calling in airstrikes and using night-vision lenses with the Marines, and relying on guerilla tactics and improvised munitions with the rebel fighters.

"This is a completely new perspective for Modern Warfare, this is a brand new thing," Infinity Ward narrative director Taylor Kurosaki said. "We spend about half the game playing alongside Tier 1 operators and about half the game playing alongside rebel freedom fighters. This is exciting not only from a storytelling perspective, where we can delve into the lives of these characters and see why they fight and what they fight for, but also from a gameplay perspective."

During a presentation at Infinity Ward's offices last week, Kurosaki, Kelly and a team of developers showed off two snippets of the campaign, one from the view of a spec-ops raid on a terrorist cell in a London townhouse, and the other from the eyes of a young girl attempting to survive, alongside her family, in her wartorn city. 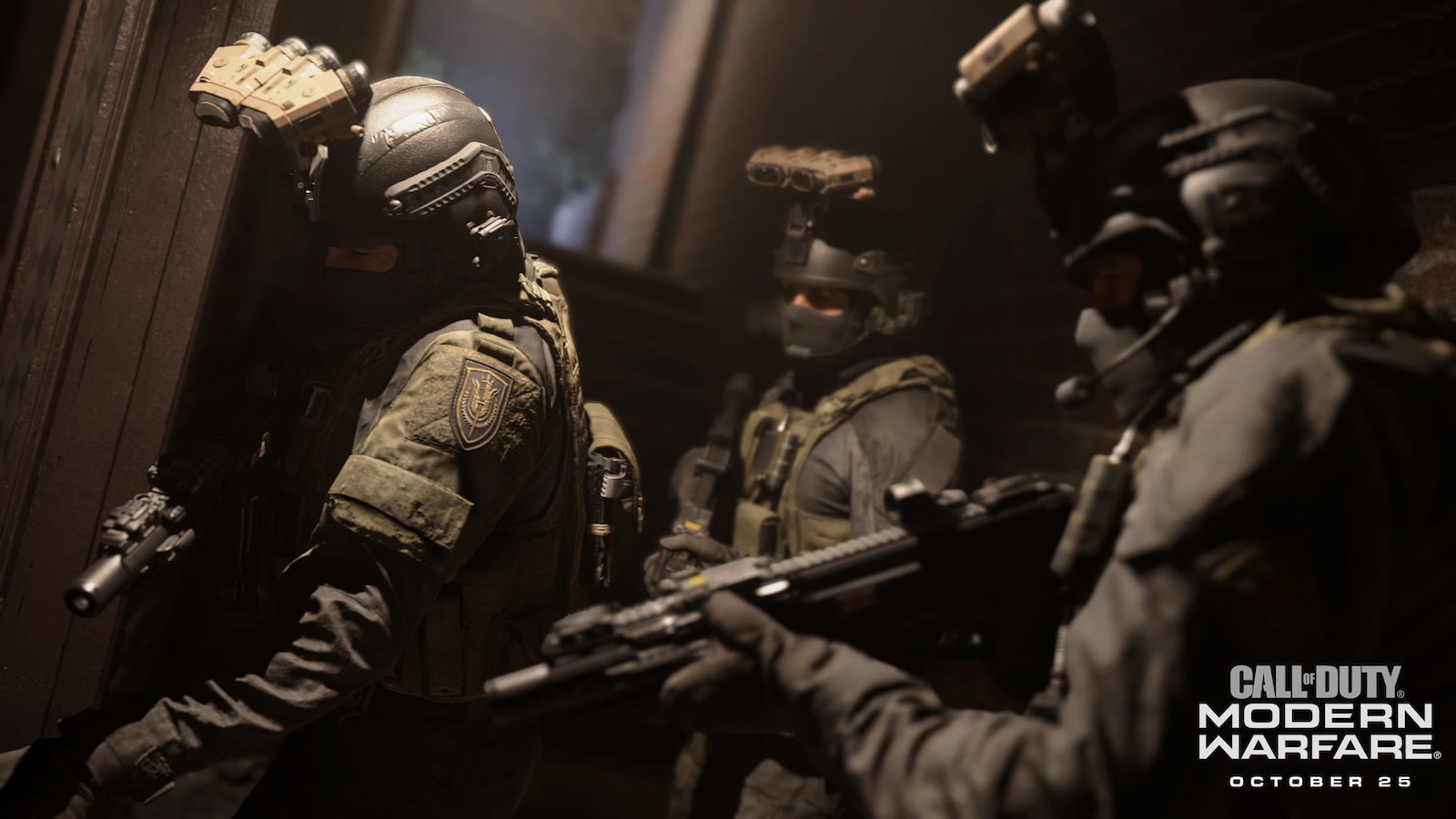 Each demo was shocking, in its own way. The townhouse raid highlighted Infinity Ward's technical capabilities, showing off lush domestic scenes rich with details, all built via photogrammetry and microtiling in the latest iteration of the studio's proprietary engine (and running in-game on a PlayStation 4). Infrared wasn't just a green overlay on a dark screen; it changed the environment on a fundamental level, materializing a bike frame in a dark alley and lighting up reflective patches on Marine uniforms. Doorways and hallways were true to scale, making the townhouse feel claustrophobic and maze-like as a swarm of soldiers swathed in black armor prowled through a back doorway, weapons drawn.

Our soldier turned a corner to see a room of people talking over a dining table littered with papers. He paused before shooting out the central light bulb, activating infrared, and killing every character in sight. The NPCs reached for their weapons and gunshots rang out from adjoining rooms as other Marines cleared the house. The soldier carried on, shooting through walls and taking down enemies scrabbling for their own guns, the entire team around him murdering the Middle-Eastern terrorist cell with smooth precision.

It was like Rainbow Six: Siege on steroids; beautifully rendered, strategically designed and shockingly calm, for a scene filled with room after room of methodical slaughter. That's how the Marines and Navy SEALs do it, developers said, citing years of research and interviews with military consultants. 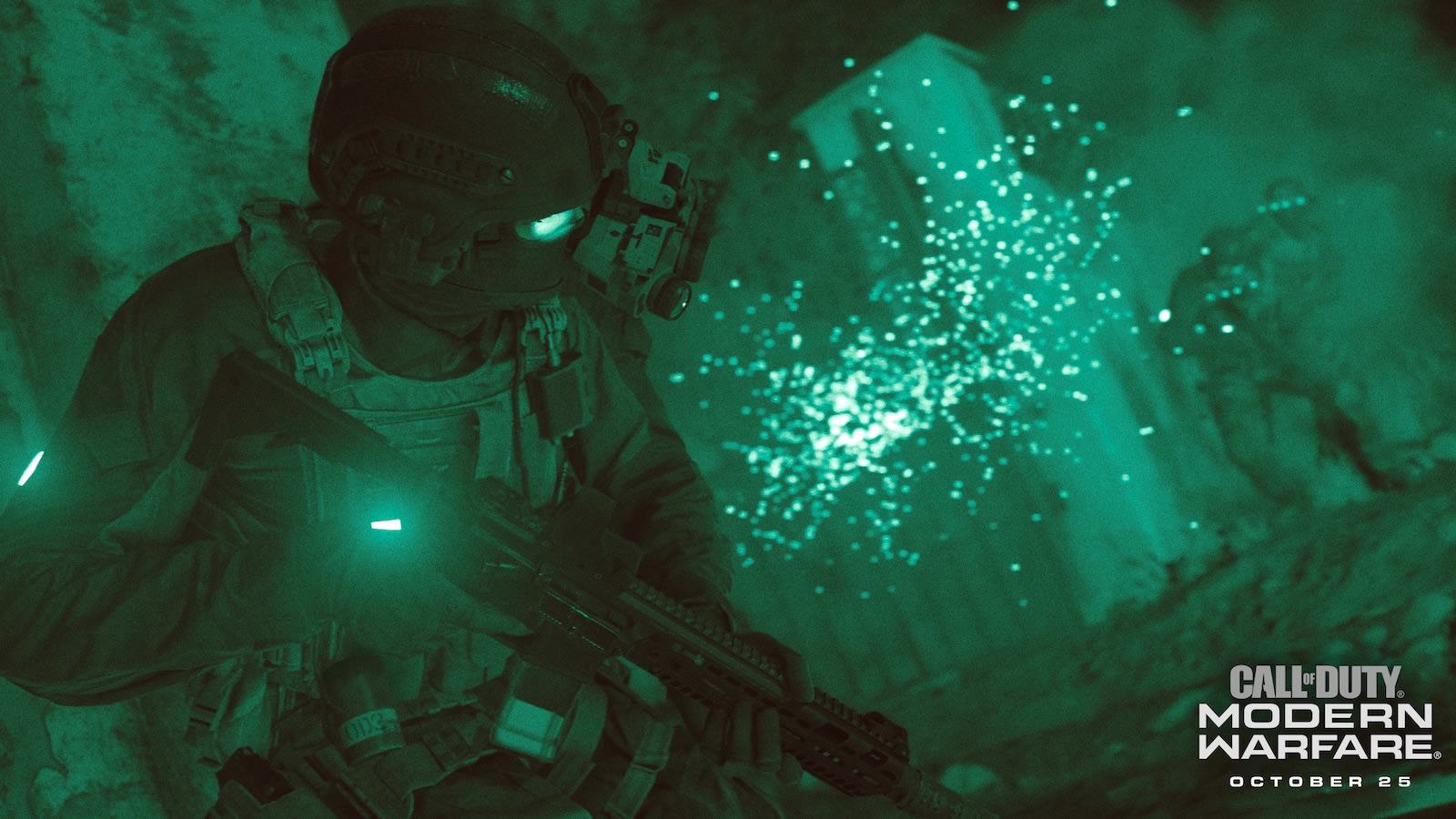 The second demo began under a pile of rubble. Small hands reached up and a young girl's voice coughed and broke as she pushed at the heavy stones crushing her. She turned her head and her mother's corpse stared back, bloodied and eyes blank. The girl called out, terrified, and clawed at the blocks, nearly making them fall in deeper and bury her, until a voice broke through from above and people began lifting stones away. A crew of people pulled her out and reunited her with her father on a frenzied street in a desert city that had just been bombed to hell.

The second demo began under a pile of rubble.

The explosions didn't stop; planes raced by overhead, dropping more bombs, and Russian soldiers on the ground shot wildly into crowds. The streets filled with poison gas. The girl and her father ran home, where they found her brother -- "Where's mom?" he asked, of course -- and prepared to flee and fight. A monster of a Russian soldier burst through the door, wearing a gas mask and carrying a rifle; the father fought him and lost, shot through the chest on the living-room floor. The children, alone now, scrambled for cover and weapons. The girl grabbed a screwdriver and stabbed it into the soldier's gut before running away, hiding around corners and crawling through vent hatches as he chased, grunting obscenities.

After a cat-and-mouse mini-game, the kids eventually killed the soldier, and then spared a moment to say goodbye to their dad, who lived just long enough to tell them he loved them. The children ran out of their house in gas masks. Noxious clouds filled the streets as they crept past corpses and Russian soldiers executing neighbors with quick, clear shots. They passed a dying dog, prompting the brother to comment on the invading soldiers' brutality. The children made their way to an enemy post, where the girl was forced to find a gun and shoot the surrounding soldiers.

This young girl grows up to be the protagonist in Modern Warfare. She and her brother adopt varying perspectives on their fight and how much of their humanity they're prepared to sacrifice for the greater good. 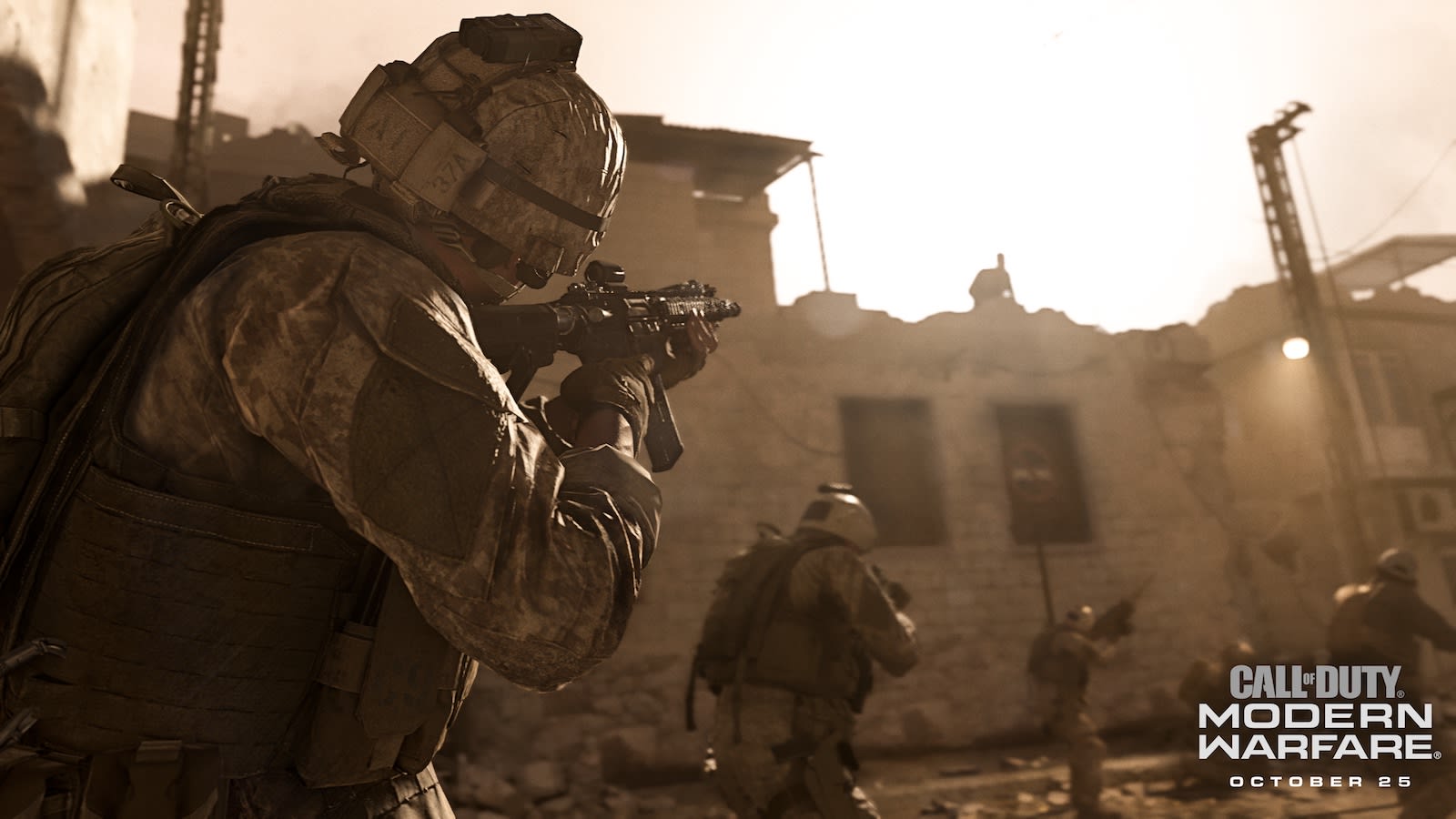 "Who says a game has to be fun?" Kurosaki said. Separate from the prepared presentation, we were discussing the balance between building a realistic, visceral narrative, and a fun game that can last years in singleplayer, multiplayer and beyond. Call of Duty is known for its competitive multiplayer modes; it's a foundational title in modern-day FPS esports. The most recent game in the series, Black Ops 4, didn't have a single-player campaign at all.

Modern Warfare is partially a response to that game, and fans' ultimate demand for a cohesive narrative experience on top of endlessly replayable competitive modes.

"I think our game is fun," Kurosaki continued. "But you don't say the same thing about going to a movie. Like, 'How do you make this movie fun?'"

Well, no. I wouldn't try this thought experiment on a war movie. However, I would bring it up with the writer of Paul Blart: Mall Cop 3, if that film were about the horrific, real-world bombing of a shopping center.

Call of Duty has built a 16-year, genre-defining, billion-dollar reputation on providing multiplayer games that value entertainment first, and story second. As a competitive, AAA FPS, it's designed to be playable for years. These games come with highly publicized multiplayer modes, ever-expanding maps, and the expectation of future, endlessly streamable content built-in.

There's a reason the Modern Warfare townhouse demo felt so reminiscent of Rainbow Six: Siege, a prominent esports success story. Modern Warfare will support cross-play between PC and console, and it won't have a Season Pass system, meaning Infinity Ward will be able to roll out more free maps, content and post-launch events than ever before. 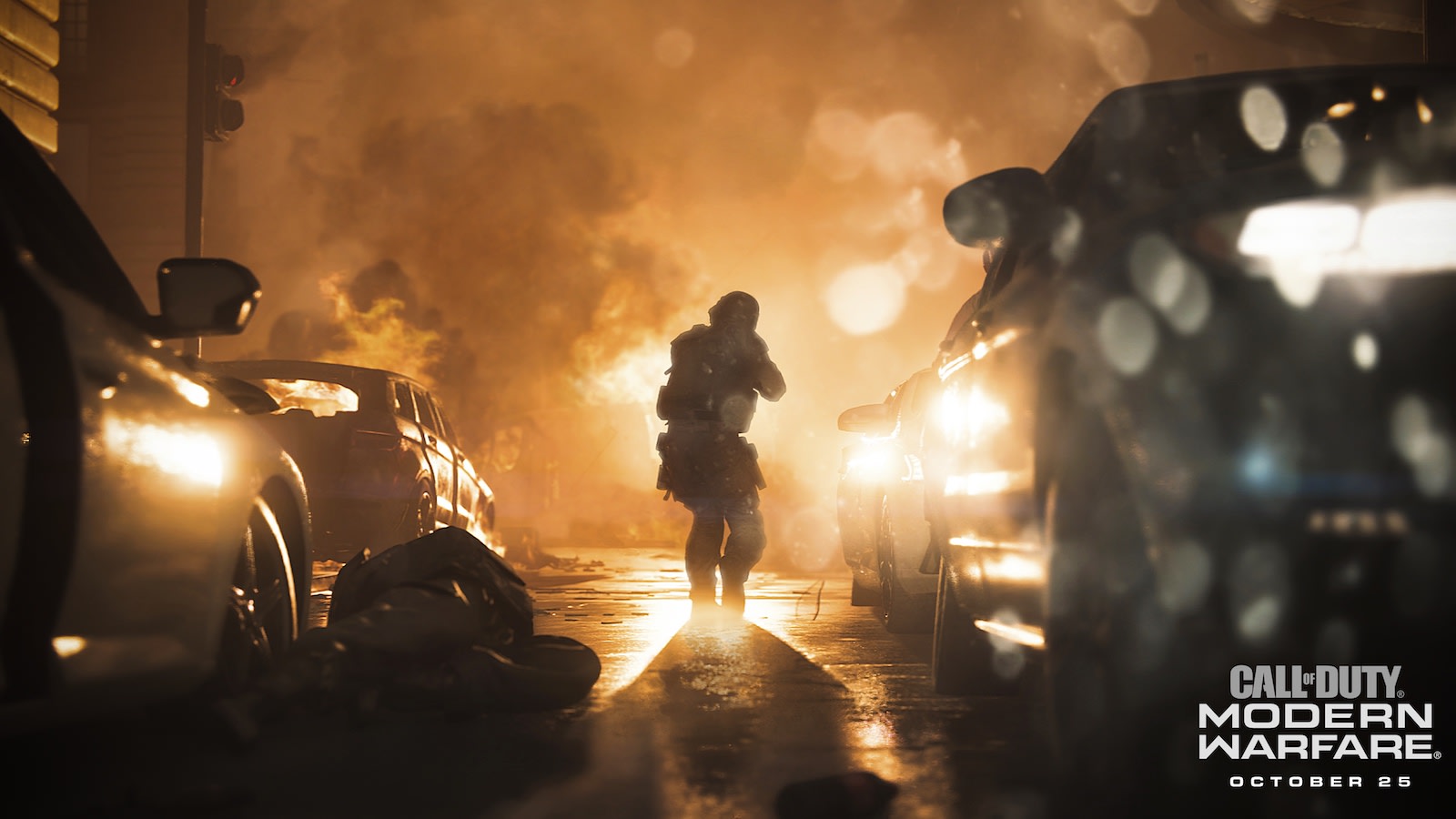 And then, there are the singleplayer campaigns. Historically, Call of Duty narrative arcs have perpetuated harmful stereotypes about Arabs in particular -- notably in the original Modern Warfare, which is arguably the series' most-beloved campaign. Acclaimed indie developer Rami Ismail described the franchise in 2016 as, "That's Call of Duty, over and over. Shoot all the Arabs. Muslim blood is the cheapest in the world."

Modern Warfare's claim of the narrative and moral high ground represents a drastic shift away from this history. It's also completely sincere. Developers are focusing on realism because they want to tell a story that matters and leave the old tropes behind, Kurosaki said. It's meant to connect with players in a fresh way and push the series forward. Realistic military maneuvers, weapons and audio. Realistic heroes, bystanders and corpses. Realistic enemies -- but still Russian and Arab ones invading foreign soil. (In reality, at least in the United States, domestic terrorists are more common than international plotters, with white supremacists leading the charge).

"Rather than be sort of paralyzed, you know, glued to your computer screen watching the news or reading these awful stories, the players of our game get to grab the controller and suit up with Price and actually make a difference in the world," Kurosaki said. "Actually make some meaningful change in this world."

Of course, images on the nightly news of children buried in rubble aren't just stories -- this is our current global reality, now woven into the fabric of a blockbuster video game. That's what lends the campaign its power, and also what makes it uncomfortable, as a Call of Duty title.

"It would be far easier to play it safe," Kurosaki said. "But, frankly, far less rewarding. And far less stimulating as a creator. It is hard -- storytelling is about making sense of the world that we live in. We, as people, are creatures of habit. We stick to the same routines, we don't step outside of ourselves unless life kind of smacks us down and forces us to do so."

Modern Warfare's singleplayer campaign remains tethered to its multiplayer component. No matter how real the story gets, it'll be attached to a prominent handful of modes where players murder each other, die and respawn in a constant, online loop. Fun, rather than real.

It's not a question of whether an emotional story about the real-life trials of contemporary war is right for a video game, but whether this particular story makes sense for Call of Duty.

"We don't have any more emotional distance from this kind of stuff than the men and women who put their lives on the line and fight in these wars every day do," Kurosaki said. "That's all. We're not morbid. We're not immune to things that feels shocking or are heavy, but if you're going to be effective in the world of Modern Warfare, as an operator, as a fighter, as someone who has a chance of making a difference, you have to have a certain level of emotional detachment to be able to do your job. And so do we."