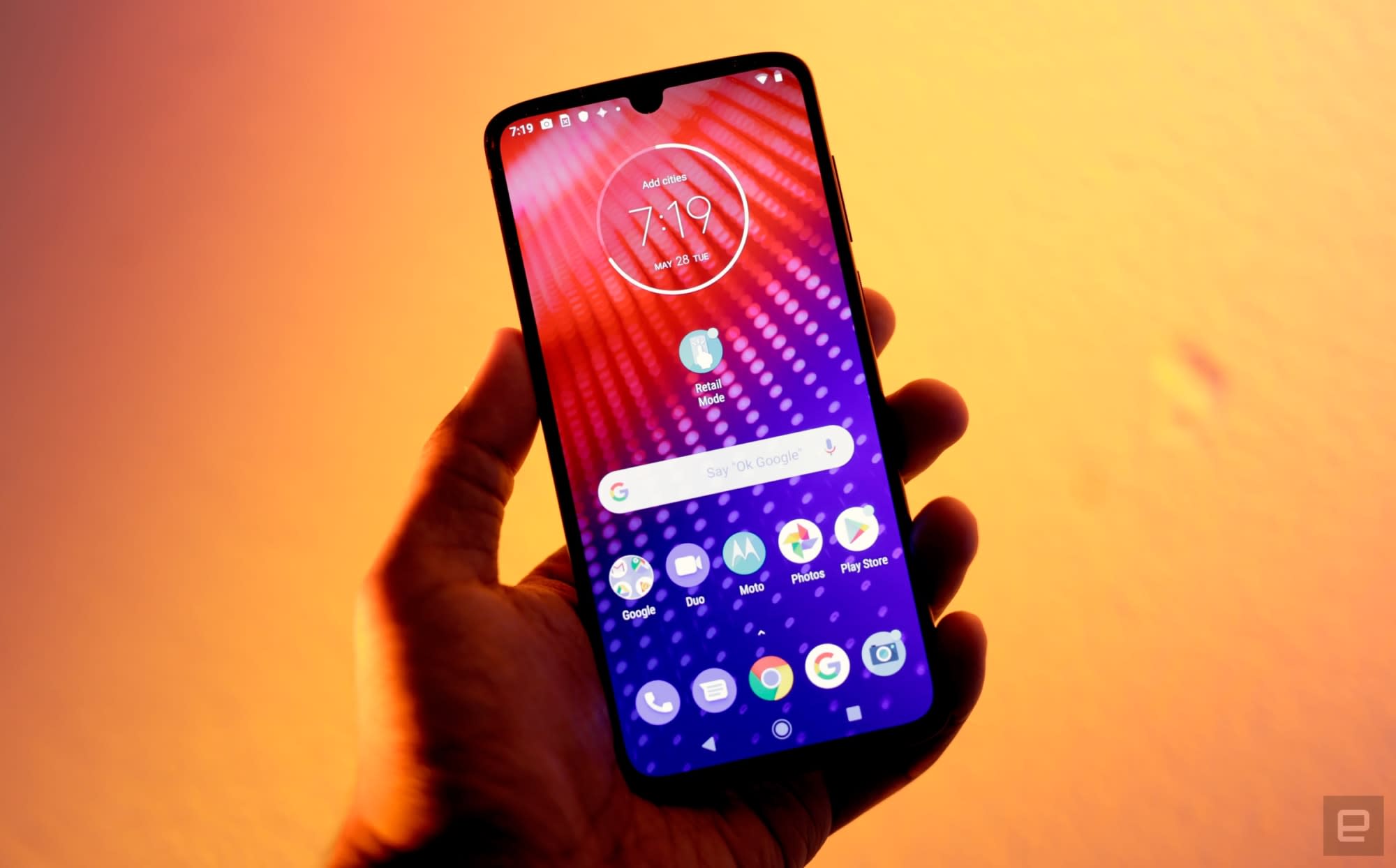 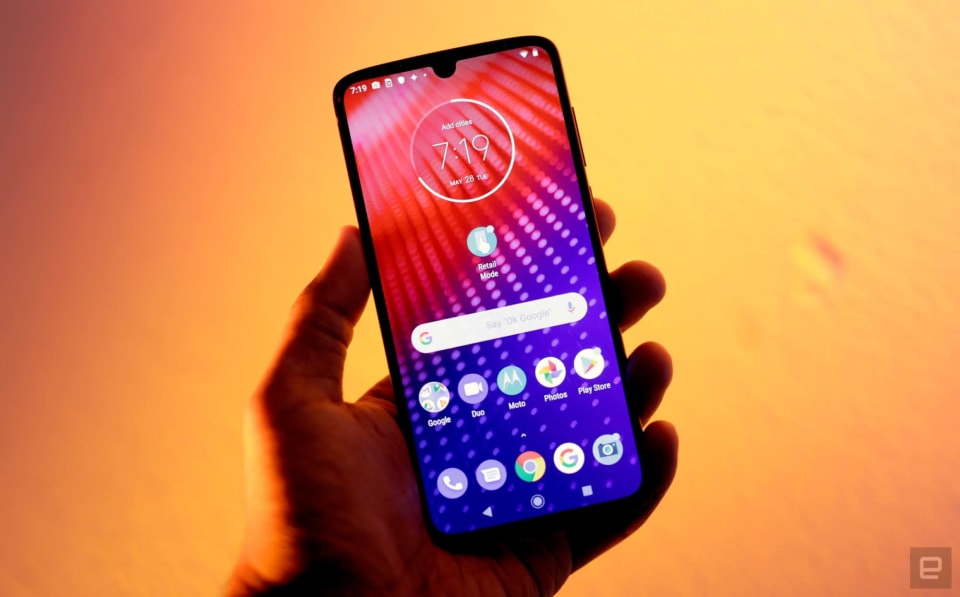 It's not unusual for leaks for spoil surprises to smartphone makers gearing up for a launch. What's less common is seeing a completely unannounced device pop up on Amazon and actually make its way to a customer. Oops.

As at least one widely viewed hands-on video has already confirmed, the Moto Z4 is a real thing. For the unaware, it's a mid-range device from a company that excels at mid-range devices, and it packs a slew of more modern flourishes you won't find in Motorola's first, Verizon-exclusive, "5G-upgradeable" phone. It's also pretty short on thrills, though considering the Motorola we've seen in the US recently, that isn't much of a surprise.

That's not to say the Z4 doesn't have its charms. The 6.4-inch, 19:9 display up front is spacious and easy on the eyes, though anyone hoping for the kind of cinematic screen introduced on the Motorola One Vision may be a little disappointed. There's also an optical fingerprint sensor wedged underneath that screen — it works well enough, but it isn't nearly as fast as in-display sensors we've tested in other devices.

Two facets of the Moto Z4 experience require a little more scrutiny — let's start with design. For years, Moto Zs have been blocky devices with flat backs to accommodate all of the magnetic Moto Mods you're supposed to attached to them. This year, Motorola went with a matte glass back that's both reminiscent of OnePlus phones and slightly curved so it's more comfortable to hold onto. As that early hands-on suggested, that curve means the Z4 doesn't have as much flat surface area on its back, so the edges of some Moto Mods might jut out slightly.

Motorola says it extensively tested all of its Mods on the Z4 so it doesn't foresee any issues with the redesign, but I can't help but wonder if some older Mods won't be more prone to popping off. (Newer Moto Mods, like the 5G add-on and the updated game controller and Alexa speaker mods Motorola is working on won't have this problem.) I should also point out that, as usual, the Z4 isn't fully water-resistant — Motorola says it's coated in a nano-repellent to keep droplets of water out, but dropping this thing in a pool over the summer could be the worst thing you could do to it.

And then there are the cameras. Rather than go for anything more elaborate, Motorola went with just two sensors: a 25MP front-facing camera and a 48MP main camera resting in the classic, circular hump around back. By default, the phone uses a process called pixel binning to treat clusters of pixels on both of those sensors as single larger ones, for better detail and less noise (especially in low-light situations). That's probably for the best, though you can shoot selfies at full-resolution if you really wanted to.

More importantly, some of the new camera features that debuted on the One Vision are here too. Motorola's Night Vision mode can produce some bright, Insta-worthy photos (though it's still notably less effective than Google's Night Sight). AI shot composition seems more immediately useful: It allows the phone to look at the photo you just took, and automatically crop and level the image to look a little tidier if your framing is off. Oh wait, you did that on purpose? That's fine, too — when the feature is enabled, Motorola's suggestions get saved alongside the original.

The Z4 is shaping up to be a perfectly adequate upper-mid-range device, but I can't help but long for the days when that "Z" denoted full, flagship power. As Motorola freely admitted at its launch event, though, it hasn't released a high-end Z phone since 2017 — in fact, if you look at Motorola's lineup, there really isn't a traditional premium flagship at all.

Granted, nearly all of the success Motorola has found over the past few months has been because of its affordable mid-range devices, but it does sort of feel like the company is intentionally keeping its high-end offerings limited to make room for its first foldable smartphone. (Sorry: Unlike last time, Motorola artfully dodged all questions about future products.)

And to be quite honest, the Z4 would look at least a bit more palatable if Google didn't recently deliver a stunner of a $500 phone. After a bit of testing, the Pixel 3a offers similar levels of performance, but unsurprisingly blows the Z4 out of the water when it comes to camera performance and access to new versions of Android. It's arguably the best phone in that price range you'll find on the market right now, but it does nothing for people who are itching to get started with a live 5G network. And really, that's one of the only apparent reasons to buy a Z4: It's a way for people to start using Verizon 5G (albeit in two midwestern US cities for now) without plunking down too much money. Beyond that, it doesn't seem to excel in any significant way. 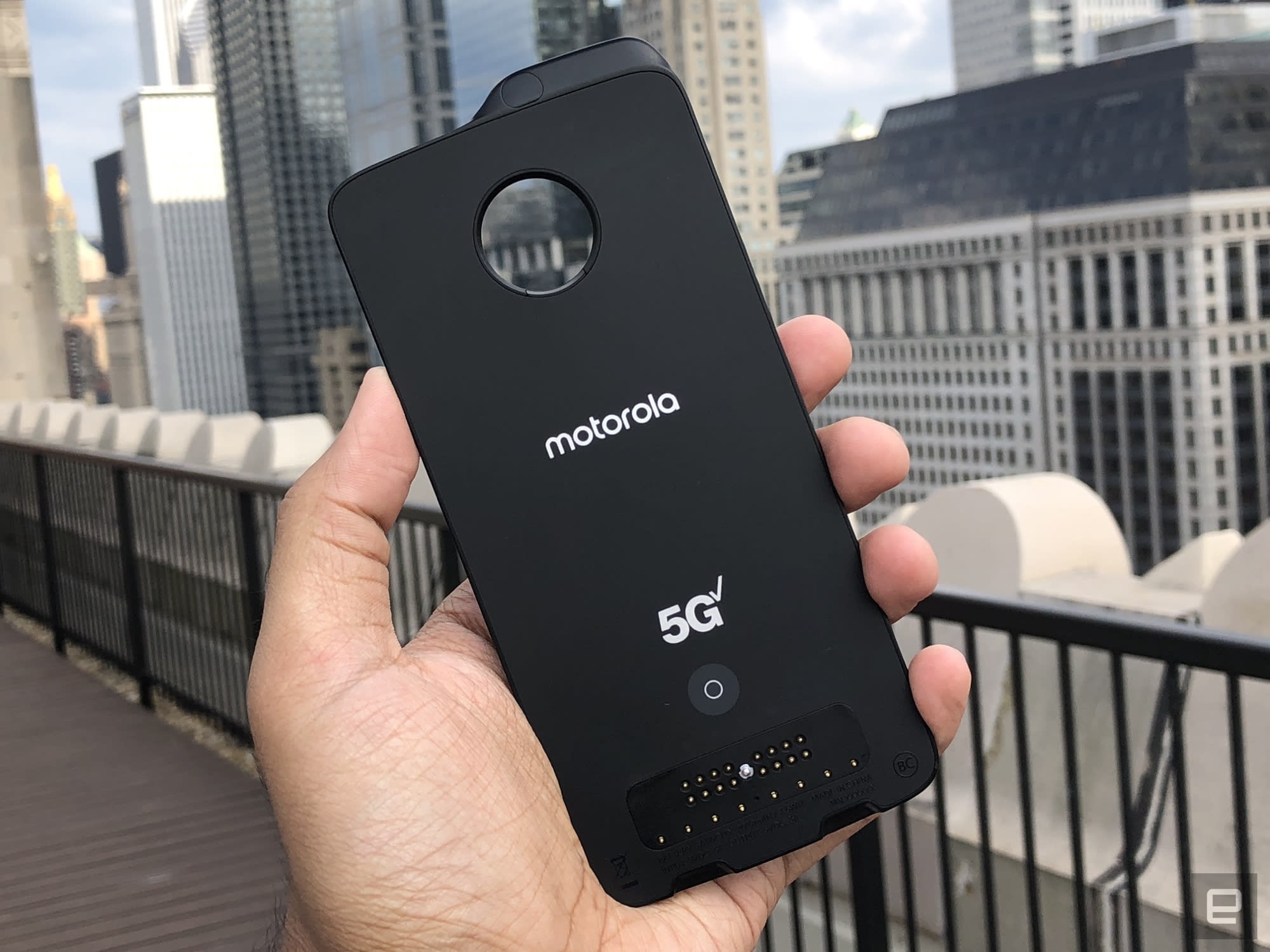 That certainly explains why Verizon is offering something of a sweetheart deal here. The Moto Z4 will set you back $499 and will come with a 360-degree camera Mod unless you buy one from Verizon, where it's only $439 and includes one of Motorola's 5G Moto Mods. (For the record, you'll get an error if you try sticking a 5G Mod onto an unlocked Z4.) I'm told Verizon's 5G service has improved significantly since the last time I tried it, and if you're locked into Verizon service, a cheap way to get started with 5G isn't a bad idea.

After a bit of hands-on time, though, the overall picture is less satisfying for everyone else. We'll have to test the thing further before issuing a final verdict, but so far, the Moto Z4 seems like a perfectly adequate mid-range device that really needs its Mods to stand out in an increasingly competitive crowd.

In this article: 5g, 5g mod, gear, hands-on, lenovo, mobile, modular, moto mod, moto mods, moto z, moto z4, motorola, smartphone
All products recommended by Engadget are selected by our editorial team, independent of our parent company. Some of our stories include affiliate links. If you buy something through one of these links, we may earn an affiliate commission.